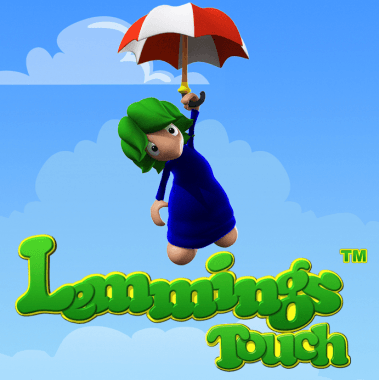 Despite what you may have heard in the past; lemmings are nothing more than small, rodent-like animals native to Arctic and Tundra-type biomes. They’re not mythological creatures born of the sky nor are they the type to participate in mass suicide as the legends and myths have described. They’re simply a product of decades of misunderstood storytelling but, like many things, it all depends on who you’re asking. If it’s d3t and Sony, they’ll tell you that Lemmings are odd, bipedal, humanoid creatures who work en masse to reach a certain goal…at least, that’s what they’re like in the game.

The original “Lemmings” video game came out in early 1991 and seems to have made it all the way to 2014 being remade time and time again by different developers on different consoles and the latest one is here on the PlayStation Vita. It’s called “Lemmings Touch” and thanks to Sony Computer Entertainment Europe alongside developers D3T LTD I’ve been given the chance to see exactly how good a video game series can get with over twenty years of experience behind it. 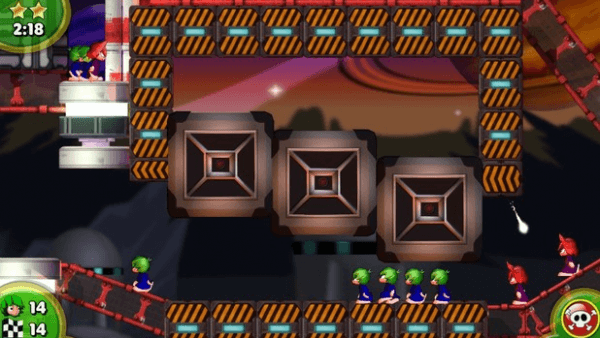 In “Lemmings Touch”, like the other titles in the “Lemmings” series, you’re placed on a themed stage and are tasked with getting a specific number of “Lemmings” from the beginning of the obstacle course to the very end, all the while building, digging, jumping and everything in between to help make the journey easier for your little green friends.

Levels are 2D and packed to the rim with different hurdles to overcome. “Lemmings” are dispatched at certain speeds (of which you can adjust) and it’s up to you to micromanage them into reaching sanctuary. Everything you can do in “Lemmings Touch” is touch-based…obviously…and, for the most part, it’s all fairly responsive but you’ll find yourself becoming a little frustrated every once in a while when one of the little guys doesn’t quite listen to your commands. 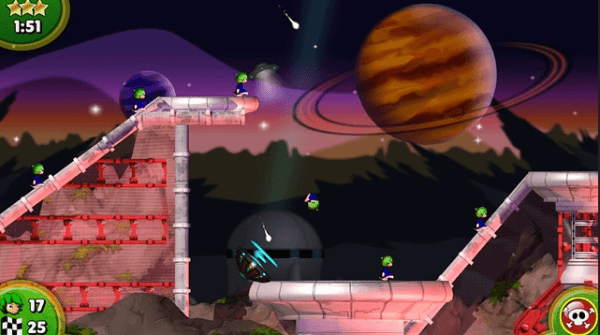 “Lemmings Touch” also introduces another breed of “Lemmings” that don’t entirely share the same worldviews as their green counterparts. These particular critters travel as part of the horde but only work against you, the player. Letting them get to the end with the other “Lemmings” is not a good idea so you’ve got to “dispose” of them before they can get there. I found this game somewhat enjoyable despite the fact that I’m not the biggest fan of puzzle games.

Most levels were easy enough to get through while at the same time it forced me to use at least some of my brain power to help devise a plan to get through the stage. At times I was annoyed that the smallest of mistakes cost me so much, the game doesn’t seem too forgiving at parts and it really put a hindrance on my enjoyment of it. Though…maybe I’m just not as intelligent as I thought. 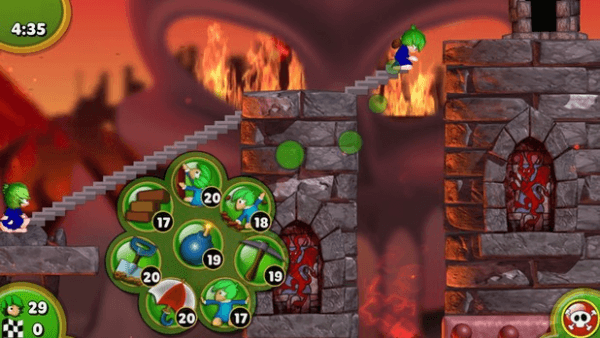 I was impressed, to a certain degree, at how the game looked: It’s full of vibrant colours and shapes that make for some really nice aesthetics but as far as actual graphics go; they’re quite poor. It’s just a good thing that you’re forced not to focus on that, instead you’re “bombarded” with odd background animations to steer you away from what you’re really meant to be focusing on. I can definitely see what the developers were trying to do with the way the game’s visuals were laid out but, at the end of the day, all it did was drag the player’s attention away from the actual task at hand.

Even in saying what I just did, the graphics were quite nice with most pieces of animation being fluid enough for me to note. Each and every stage ran with a different theme which meant there was always something new to look at. It’s thanks to this that the game didn’t get boring almost instantly, you’re given a whole bunch of different visual styles to experience which mean there was always something to look at while waiting for a “Lemming” to do it’s job though the problem I mentioned above still persists. 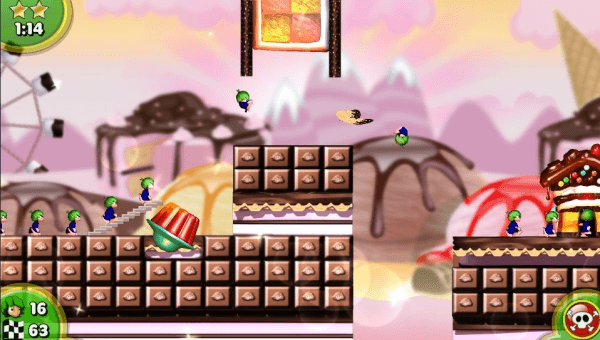 The “Lemmings Touch” soundtrack works similarly to the way its visuals do: With every new level comes a different theme, the first being Egyptian. With every new theme comes new visuals and new musical tracks. What works well about this is that most levels take approximately five to ten minutes to complete, depending on how well you play, which gives you just enough time to begin getting used to the musical track with it running its course and becoming annoying.

Before you know it you’re finished with one level and onto another without getting annoyed at the repetition of a particular song. A majority of the sound effect throughout “Lemmings Touch” are definitely aimed at a younger audience. Most sounds are cute, chipper and quirky with a lot of bounce and an overall positive tone. This fits into the game perfectly and allows for an all around welcoming vibe that a lot of players can enjoy. Young or old. 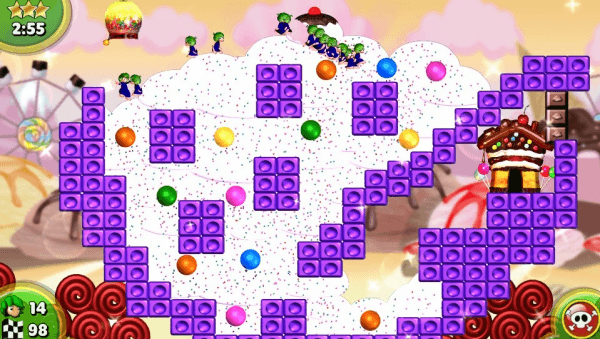 Essentially, at it’s core, “Lemmings Touch” is a mobile game that is being sold for far too much and on the wrong gaming platform. Everything you can do on the PlayStation Vita could be done on a mobile device like an iPhone or Android Phone without the hassle of having to reach over the console’s buttons just to get your fingers and thumbs where they need to be; on the touch screen. Fans of the video game series will immediately feel at home with “Lemmings Touch” but for those of you out there who have never experienced a title from the series, it may take a little getting used to.

Like any game there’s a certain learning curve you must come to terms with before you can truly enjoy it though I feel as like true puzzle fans will quickly scale that curve. For all intents and purposes, “Lemmings Touch” is a nice little game for the PlayStation Vita though I do find it overpriced for what it is. With the amount of great titles released on the console I can’t see why anyone would rush to grab a time filler like this but that’s not to say long time fans of the series wont be excited to get their hands on it. Just know what you’re getting into.