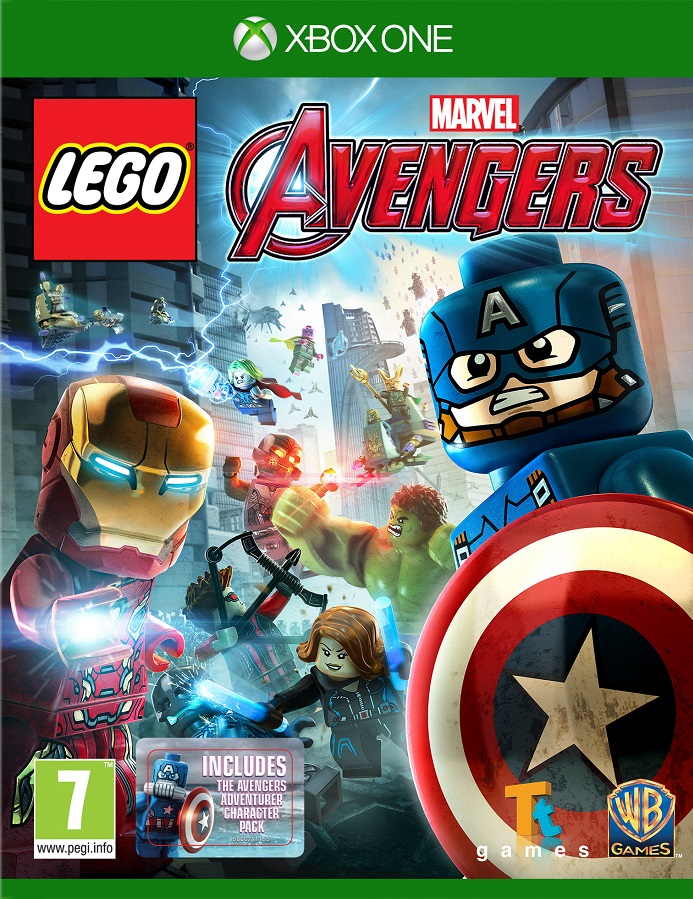 It seems that the Lego franchise games are starting to be churned out quicker than Assassin’s Creed or Call of Duty Games, and yet I find myself being excited every time. The brilliant array of properties and the stories that these games are able to tell are always enjoyable and I can never wait to jump into them. That’s why, when Lego Marvel’s Avengers was announced, the comic book geek inside me exploded with joy and couldn’t wait to relive all of my favourite moments from the Marvel Cinematic Universe with colourful, cute Lego pieces. However only a few minutes into the game I was struck with something; I had been here before. Lego Marvel Avengers may finally be the game that makes me step away from the Lego franchise for a little while. 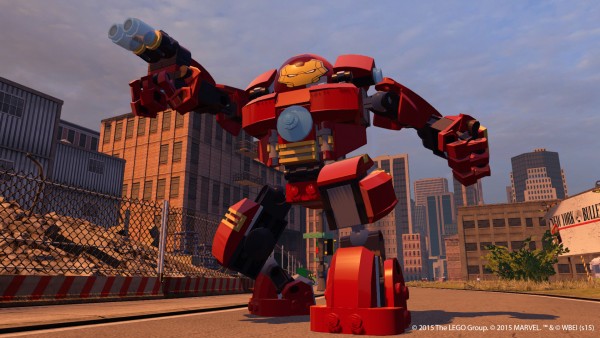 Unlike its predecessor, LEGO Marvel Super Heroes which tells its own unique story, LEGO Avengers instead adapts the hugely popular Marvel Cinematic Universe . Starting with the opening battle from last year’s Avengers: Age of Ultron, time then jumps back to Loki attacking the S.H.I.E.L.D. Base at the beginning of 2012’s Avengers. From there you will dip into the timelines of the origin movies of our favourite caped heroes.

The jumping back and forth between movies and time periods is a little bit disorienting and I can’t help but wonder how much more cohesive the game would be if it was told in either film release order or if the events were in chronological order.

It also needs to be said that since this game adapts the film universe, there is not really anything new to see an explore. Don’t get me wrong that trademark Lego/TT Games sense of humour is here and they really go crazy with some of the classic Avengers moments, but the story, the characters even the dialogue; it has all been seen before. 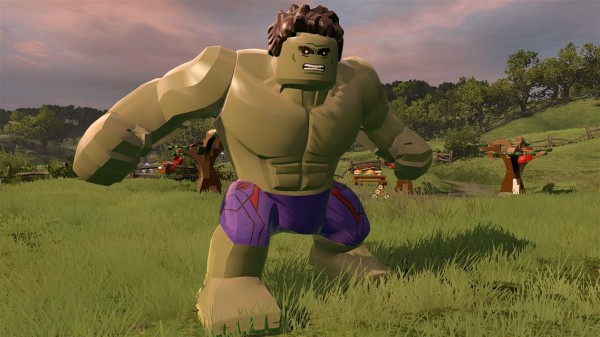 Lego Marvel Avengers at its core is an action game that has the player (or players, because this is still one of those few titles that encourages couch co-op) taking control of a member of the Avengers team and mow your way through waves of enemies, as well as using the individual (or team) skills of the colourful heroes to solve puzzles, find hidden rewards and make your way through the stages. Combat is relatively simple, usually relying on just one or two button presses to destroy the colourful plastic enemies in your way, but this is a kid’s game and it works well for the title. There are also new finishing moves that have your Avenger destroying their opponent with a slick attack combo that area joy to watch.

There is also a surprising amount of content in a game aimed at kids. Not only are there the game’s levels, each with different requirements like Stan Lee’s to be saved, studs to collect. Minifigs to find and secret areas to uncover. You will be heading into each level at least twice to discover everything,  and that isn’t even mentioning the open world Manhattan. I don’t think I’ve even found everything that Manhattan has to offer after more than 15 hours with the game. 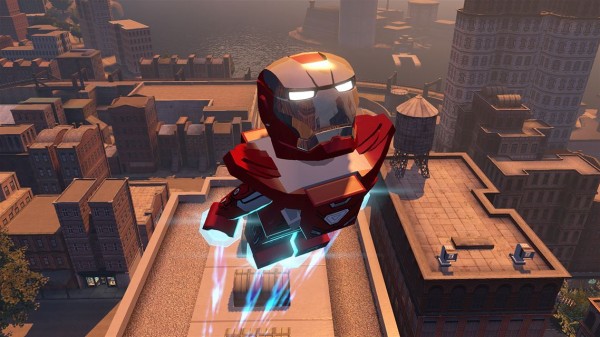 The gameplay for Lego Avengers is actually really solid. Sure the finishing moves can get a little time consuming and repetitive, but for a game aimed at kids it is really responsive, fluid and easy to master. However for as solid as it is, there is one huge problem and it is the beginning of a trend that runs through the entire game; nothing here is new.

Since the very first Lego Star Wars game, the Lego series has utilised a very, very similar gameplay style for all of its games. Even outliers like Lego Dimensions or Lego City: Undercover play exactly the same. Now this has a benefit of anybody being able to pick up any Lego game and having a great understanding of how it works, but on the flip side it means that there is nothing aside from a few minor gimmicks the games play exactly the same. A few button mashes will take out most enemies and the way that you have to go hunting through levels to grind for unlock able characters and art has remained the same. In many instances this leaves the games feeling like pallet-swaps of the ones that have come before and Lego Avengers is probably the worst offender of this.

I think part of the issue has come from the short release schedule of these games, with one to two titles dropping each year there is no real time for the developers to step back and further improve on what they have. While the adage of “if it ain’t broke don’t fix it,” is true, eventually the refusal to work on things leaves them worn down and broken. 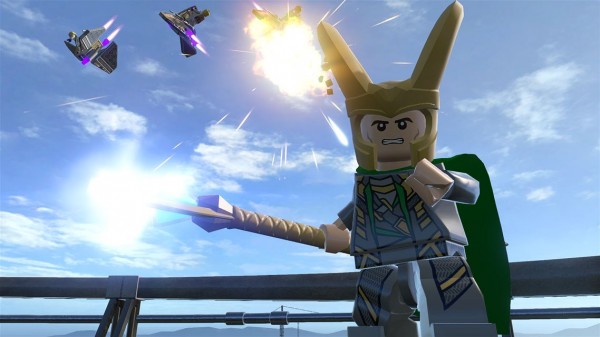 While voice acting has become a standard part of the Lego video game experience, it still falls into two separate categories; recorded dialogue, and audio that has been ripped from the films. Funnily enough, Lego Avengers has a quite nice balance between the two with the main Avengers characters retaining their audio from the films, and side-characters getting completely re-recorded dialogue. This is a bit of a double edged sword because as awesome as hearing Robert Downey Jr. And Chris Evans in a video game is, there is a real disconnect in audio quality between the recorded and the ripped. The audio from movies sounds a little more echoed and a little quieter, not to mention the fact that each character only really has a handful of lines that are sprouted on repeat in every enemy encounter.

Visually, this is a Lego game. Like the gameplay before it, the look and style of Lego Avengers is remarkably similar to games like Lego the Hobbit or Even Lego Dimensions. As always, I cannot fault how much the features of the world really do look like they have been built out of the world’s most popular toy bricks. Not only that but the characters all retain their signature looks from the films, including the slight variations in costumes that happened as the franchise progressed.

While everything looks great, it is still very same-y. The same pre rendered maps with interactive set pieces being made of Lego is a longtime feature of the series and at this point is just not as exciting or engaging as it once was. 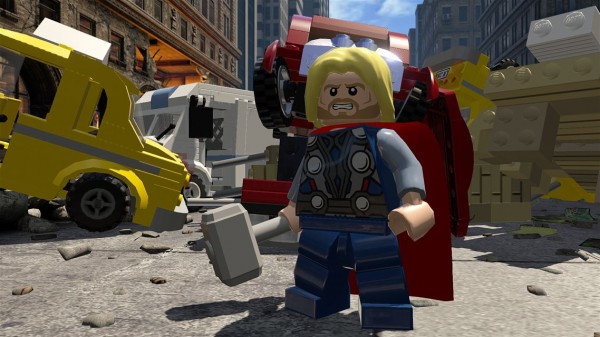 I am not going to lie, there is nothing offensively wrong with Lego Marvel Avengers and it in fact is a fine game. The issues that plague it however come from the fact that Warner Bros. and TT Games have created this homogeneity to the Lego franchise that just makes you feel like you are playing the same game over and over again. Same simplistic combat, same map design, same visual look and same collectible grind to unlock all of the content just had me feeling like I had seen  all of this before.

Honestly the way that the game adapts the film universe creates a fun and bite-sized way to enjoy the Avengers universe, but the way that it so religiously adapts the films does not help with the feeling of repetition, homogeneity and sameness that I felt while playing.