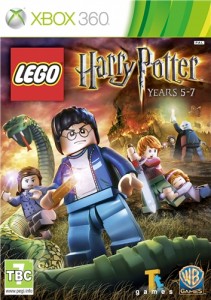 Overview:
With all the secret areas and hidden Easter eggs of the LEGO games, the magical world of Harry Potter seems like a natural choice for the LEGO treatment. LEGO Harry Potter: Years 1-4 ended with Lord Voldemort rising to power again through the story of the Goblet of Fire. LEGO Harry Potter: Years 5-7 LEGO-ifies the preparation for the final battle against the Dark Lord before it comes to a head with the final face-off between Harry and the dark wizard who killed his parents. This makes it not only more epic in scale (Hogwarts is vast and you explore many other recognisable locations) but more epic in content.

Story:
Don’t get me wrong, although this second half of the saga sees the deaths of many key characters, it isn’t all as grim as it sounds. The LEGO humour is on top form; after seeming to stagnate a little in recent iterations, it’s back to its old, hilarious self, with the laugh out loud moments coming in cut scenes especially. Anyone who has seen the films will appreciate its slapstick re-enactment of events from the films (Order of the Phoenix, Half-blood Prince, Deathly Hallows: Part 1, Deathly Hallows: Part 2). While the jokes wouldn’t be nearly as funny for those who haven’t seen them, given Harry Potter is a bit of a phenomenon and one of the highest-grossing films series in the history of cinema the number of people eyeing the game who haven’t followed the films is negligible.

Gameplay:
The structure of Harry Potter: Years 5-7 is much more ordered than previous games, following a linear path in keeping with the order of events in the movies. The fact that it’s in chronological order makes it seem more like an adventure than other LEGO games which have you dipping in and out of various instalments of the given saga as you please. However, what this does mean is that a certain degree of accessibility and the ability to ‘pick up and play’ is lost, as you can’t always come and go as you see fit. You have to reach a clear stopping point, as the levels are all chained together with purposeful movement through the world outside the level – in that you follow the events of the films even when outside of proper levels. Free-roaming still has an objective: to get to the next stage in the story an trigger the next fully-fledged level. What this does mean is that it can be unclear where to call it a day and switch off, as you have to wait for the auto-save icon (which, rather amusingly, is a floating LEGO Voldemort head) or risk losing some of your progress. 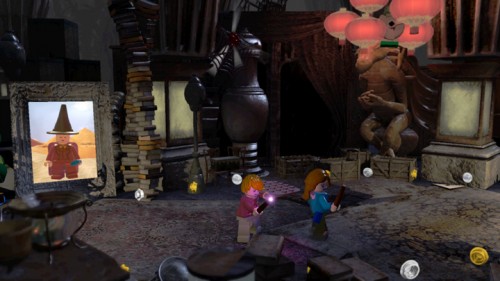 To guide you through Hogwarts or whatever other part of Harry Potter fantasy world you are exploring, the game gives you a ghost trail of studs to show you the way that furthers the story. This comes on top of various other glimmering and glittering effects which direct you or point out objects that can be interacted with.

However, this doesn’t prevent you occasionally running into problems and getting stuck for a short moment, especially in confined spaces where these directional cues aren’t present. The attention to detail is superb, with even smaller, less important moments from the films captured in LEGO. As with anything that tries to whittle down the subject matter to a more manageable length, though, many moments have been criss-crossed and combined. This can be confusing and lead to the aforementioned instances of getting stuck, as you aren’t sure exactly how closely it’s following events in order to judge what you’re supposed to be doing next. Many areas you will think you have gone over with a fine-toothed comb will reveal something not in the films after several minutes of being unsure what you need to do next.

The gameplay at the centre of it all is very similar to other LEGO games. A mix of platforming, action and puzzles awaits you, and these make inventive use of the Harry Potter universe with a spell wheel housing your gradually expanding knowledge of spells, potions to drink giving you extra abilities for a short time and puzzles referencing the skill sets of the franchises characters. The seamless two-player co-op returns once again, although so does the new split screen feature introduced a few LEGO games ago for multiplayer, which isn’t to my tastes. As the divide between the two players is constantly changing it can be disorientating, plus I think it shifts the emphasis away from teamwork. 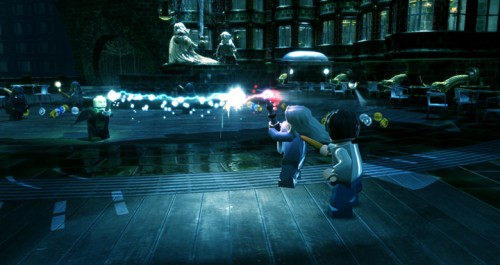 Visuals:
The likes of Hogwarts, Hogsmeade and the Ministry of Magic are captivating all on their own, so you’ll be pleased to know that Traveller’s Tales have done everything justice in the visuals department, with a world that seems to be, for the majority of the game, bustling with activity. The developers have applied the LEGO effect nicely where needed – such as the way Grimmauld Place builds itself with LEGO before your eyes – but like LEGO Pirates, they seem to have gone overboard with the sheen on the characters. They’ve tried to make it look incredible by having light reflecting off of the polished bits of plastic, but even real LEGO isn’t that shiny. Also, it can be hard to register what and who some locations and characters are supposed to be, particularly in the case of the latter where the one-size-fits-all minifigure proportions make it hard to tell.

Audio:
The soundtrack is made up of iconic tracks from the films or music inspired by the films’ musical score. There’s also the other sound effects from your surroundings and grunts from characters. Surprisingly, some of the grunts actually capture the personality of the real thing. Not that it makes a huge difference, others clearly don’t match the real thing, although when combined with the difficulty you can have telling who’s who because of the character models’ proportions, can cause you to have trouble working out who people are supposed to be. 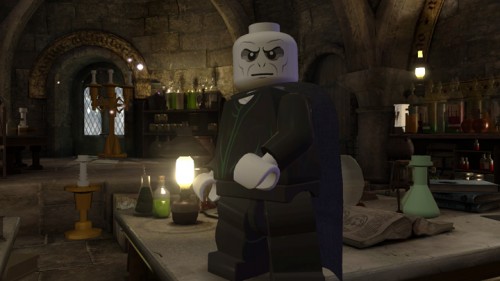 Overall:
Having a tighter structure that forces you to follow the order of events accurately works wonders for LEGO Harry Potter: Years 5-7 and, in tandem with the more dramatic nature of events, manages to make the game feel more like an adventure. It’s a return to form for the LEGO games, which I felt were flagging of late; the humour’s well-executed and the gameplay really lends itself well to the fantasy world of witches and wizards, even if the irritating split screen mechanic continues to feature (to the detriment of the co-op experience). The LEGO games may not be as enchanting as they once were, but Traveller’s Tales have delivered a magical adventure nonetheless.