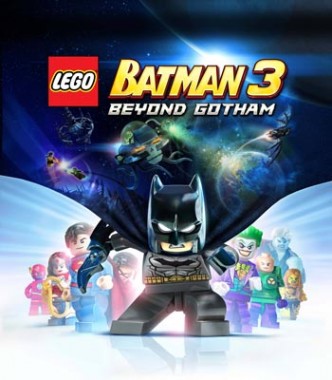 I love Batman, no secrets there. I also love just about everything else in the DC Comics line-up. I grew up watching Batman: The Animated Series and nowadays I have withdrawels waiting weekly for Arrow to air. I also love Lego and fondly remember playing with the colourful bricks all in my youth. Combining the two is often a dream come true for me – my Lego Batmovibile still sits proudly assembled from my 16th birthday and my keys are adorned with a Lego Joker keychain. However, I didn’t LOVE my time with Lego Batman 3: Beyond Gotham. Don’t get me wrong, as a celebration of Batman’s 75th birthday and a love letter to DC Comics it does a stellar job. But as a video game, and more importantly – a video game sequel, it is a few bricks short of a masterpiece. 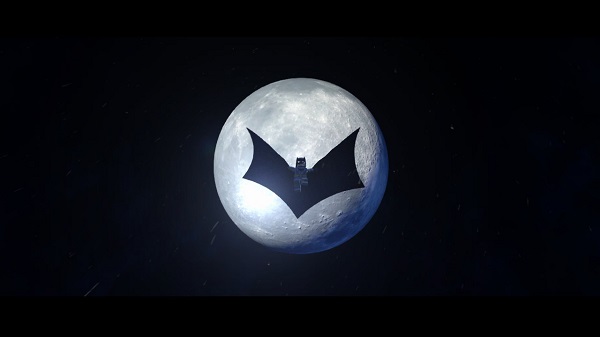 Following on a little after the events of Lego Batman 2: DC Super Heroes, Lego Batman 3 sees the universe being threatened by the inter-galactic collector – Brainiac. After attaining the powers of all seven lantern corps, Brainiac heads to earth to add it to his collection.  Brainiac’s arrival sets the scene for our game, where the Justice League are forced to team up with the likes of Lex Luthor, The Joker and Solomon Grundy who are all aboard the Watchtower (The Justice League’s orbiting satellite) in order for there to be a planet Earth left to return to. While it isn’t a particularly in-depth story, it is a pretty cool way to have some of our favourite heroes and villains team up together – and there are few villains in the DC roster who are better suited to the role than Brainiac (MAYBE Darkseid, but he could be a little TOO dark a character for a kid’s game). 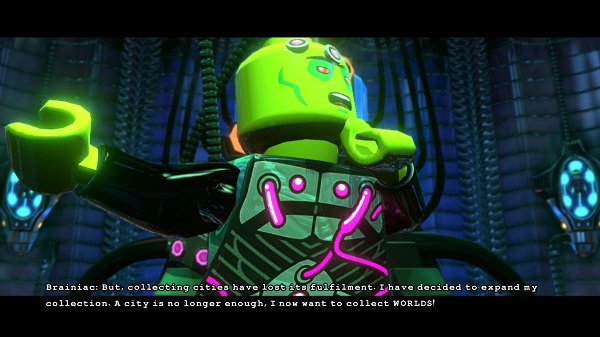 Lego Batman 3: Beyond Gotham, surprise surprise plays just like most other Lego games. You take on the roll of one of 150+ (no, not even kidding) super heroes and progress through the game’s linear story, doing some mild puzzle solving and combat along your way. The game takes place over 15 campaign missions, and during your first play through will not take all that long to complete, but Lego games are best off being shorter experiences to keep up with the attention of the target demographic.

Sadly, the free-roaming that was a huge part of Lego Batman 2: DC Super Heroes is long since gone, and while there are a few hub areas like the Bat Cave, Watchtower and a few planets here and there – these are minor in comparison to what’s come before, and the result is a much more linear gameplay experience. I found this to be a bit of a let down, especially considering that exploring the fully realised Gotham City was one of the best parts of Lego Batman 2 (and that version of Gotham was more fun to explore than last year’s Arkham Origins’ iteration). That sense of freedom and exploration has all but disappeared, leaving players to rely on the levels themselves to fulfill their need to explore, build and discover.

Lego Batman 3 also feels like a step back from more recent Lego Games, with the most recent comparison being with Lego: The Hobbit, which made great strides in creating a real RPG-style adventure for players, with its unique loot gathering/crafting mechanics. In comparison, Lego Batman 3 is a lot more bland and bare-boned, which left me feeling a little bit empty during my playthrough. While I am more than happy for Lego franchises to differentiate from one another, it should be that the mechanics between them are different, not that some franchsies have more toys than the others. 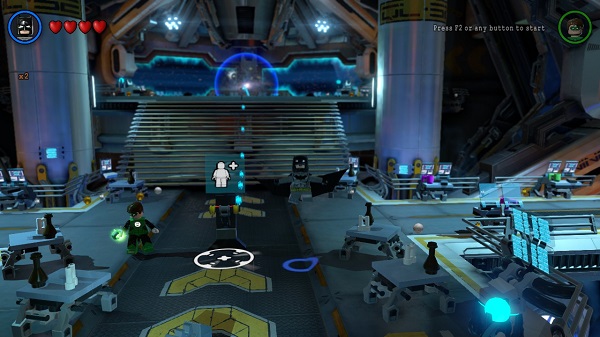 One thing that has always kept me coming back to the Lego games have been the incredible amount of collectibles to unlock. Not only are there 150 characters to unlock and use, but there are minikits to put together, Adam Wests to solve, studs to collects and upgrades to buy. While the story can be breezed through in only a few hours, players might have a little bit of a tougher time if they are completionists. However the sheer number of collectibles means jumping back into previously beaten stages is more of a joy than most other games – and being able to play as any currently unlocked character is always fun. 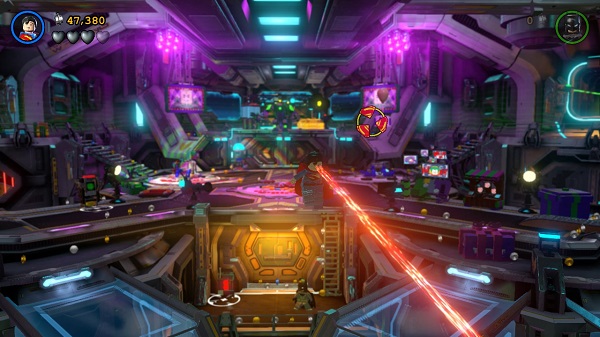 Batman’s trip to outer space isn’t without its flaws though, and lack of an open-world is not the worst of them. Lego Batman 3 is incredibly buggy. Oftentimes events won’t trigger, enemies won’t spawn or characters will just end up in places that they shouldn’t be which causes the gameplay to come to a sudden and immediate halt. On more than one occasion I was forced to quit out of the game and reload the level I was in from scratch after an item or event that was required to proceed never appeared.

For me, the game is most fun as a love letter to DC Comics. While the gameplay isn’t as stellar, the easter eggs, references and flat out allusions to DC’s long and storied history are absolutely brilliant. One of my favourite ever unlockables in a video game made it so that whenever I hit an enemy, the sound effects and comic “KAPOW” and “WHACK” text boxes from the old Batman ’66 TV series would pop up and it is the things like this that show the developers really care about the product they have created. 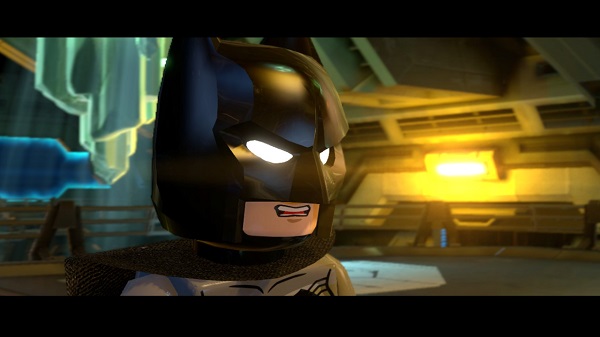 Like I said above – it is a Lego game, the visuals don’t exactly change much between games, and this is rightfully so because lets be honest TT Games nailed the Lego look and feel from the get go with Lego Star Wars, so why fix what isn’t broken. Much like every other Lego Game before it (bar The Lego Movie Videogame which had a unique look and feel among its brethren) the environments are made of a mixture of high-definition, fully-rendered backdrops with a bunch of interactible (see:breakable) objects being made of Lego.

Many voice actors from the previous Lego Batman games have reprised their roles, and they all do killer work. Not only does the consistency between games help keep the sense of continuity strong, but it has allowed some of these actors to really embrace their role. Troy Baker as always manages to steal the show as Batman (also to note – Baker is the only person in history to portray both Batman AND The Joker) but he is joined by an absolute extravaganza of voice acting talent, like Clancy Brown who IS Lex Luthor at this point, having portrayed the character in cartoons for almost two decades now. 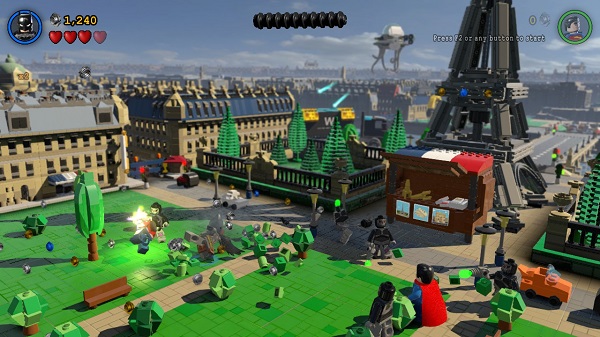 Where Beyond Gotham really shines is as a love letter to DC Comics fans, and a lot of this comes from the way that the game is presented. Firstly, by getting actors from as far back as Adam West (who voiced the Caped Crusader in the 1966 TV series) all the way up to Stephen Amell, (who currently plays Oliver Queen/The Arrow in the hit tv-series Arrow… which you should check out if you haven’t already) the developers show a lot of love to the entirety of DC’s history. Little audio cues like John William’s Superman theme or Fox & Gimble’s Wonder Woman TV theme playing then the characters take to the skies respectively are just flat out awesome and are sure to bring a smile to the face of anyone old enough (or fanatical enough) to remember watching the movies of television shows in their younger days. 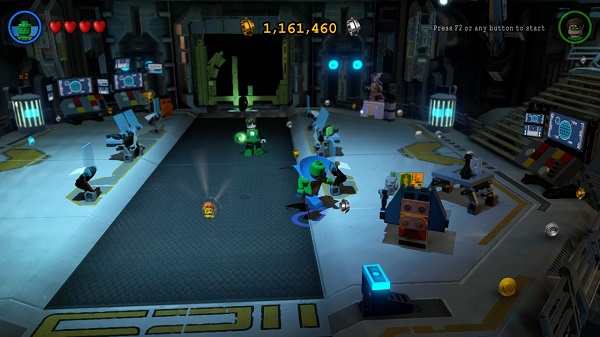 If you are like me and play Lego games every time a new one is released, and grew up reading DC Comics and watching Batman: The Animated Series then Lego Batman 3 is pretty much everything you want in a game but when you really think about itLego Batman 3 is a strange little product. It looks like it is trying to hit all of the target demographic checkboxes and in many ways feels like a love letter to the past and future of DC Comics. Adam West’s Batman, the old Wonder Woman theme, Kevin Smith as a playable character, and even TV’s Stephen Amell voicing Green Arrow all show a lot of care and love for the comic book giant, but at the same time they seem to appeal to people who would likely never play a Lego Batman game. This strange mix of kid-friendly mechanics with jokes and references that are sure to go WAY over their heads leaves Lego Batman 3 in a sort of limbo where only a tiny niche will truly “get” all of the game’s nuances.

As far as being a good game, Lego Batman 3 – Beyond Gotham definitely has its flaws. The removal of the open-world environment that Lego Batman 2 brought to the table (and other Lego games since have carried on) really make this one feel like a huge step back for the franchise. The game also glitches out rather frequently, often forcing the player to completely quit and re-enter the game for them to resolve. For all the steps back the game takes, the character roster is an absolute dream and lets you play as some of the greatest heroes and villains the world has ever seen. All in all if you love Lego and/or love DC Comics then this is the game for you – but if you didn’t grow up on them then be prepared to wonder “Why is this a thing,” an awful lot.