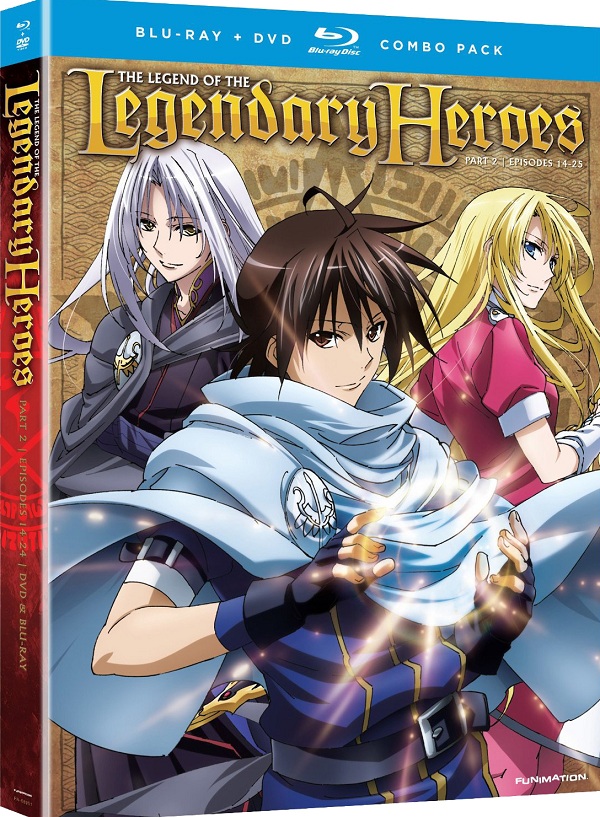 Overview:
Whenever the voice cast of any given anime is openly sarcastic about the anime they are working on’s name it is never a good thing. However with a name like The Legend of the Legendary Heroes it is difficult not to call the naming department out on the redundancy of this fact. Now while the name is bit of a handful, the first part of the Legend of the Legendary Heroes turned out to be quite a surprising journey with plenty of action, a likable cast and even some political maneuverings.

However it was consistently bogged down by slow storytelling and random plot tangents. Those more interested in reading the full review of Part One can find it here.  Released alongside the first half of the show can Part Two of the Legend of the Legendary Heroes bring this journey to a satisfying conclusion?

Story:
In Part One of The Legend of the Legendary Heroes we were introduced to the core cast of the series and their separate stories. Ryner has been tasked by his old friend and now new king of Roland, Sion, with finding long lost relics that were used by the heroes of legend long ago to shape the world as they now know it. As such Ryner must find these “hero relics” in an attempt to bring peace to a land in turmoil. 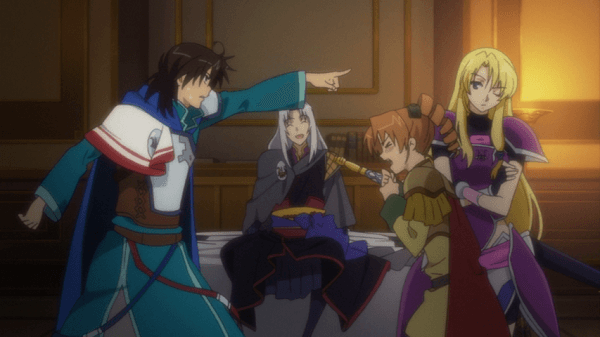 However Ryner is no ordinary person, in fact he is the bearer of the “Alpha Stigma,” a magical eye ability that allows him to instantly learn and copy any magical ability he witnesses and also allows him to unleash devastating magical power at the risk of going berserk and killing everyone around him, including his friends and foes. Sent along with him is the dango loving swordswoman Ferris Erris. While these two traveled on their journey at the forefront, Sion’s political dealings to keep Roland safe and prosperous, being the light of the nation while his subordinate Miran manipulates allies and enemies alike to assure that Sion is successful.

At the culmination of Part One Ryner and Ferris battled against another pair of travelers seeking the hero relics, Sui and Kuu. Not only did Sui and Kuu already possess multiple relics of their own, they knew more about Ryner’s Alpha Stigma than even he knew. When we last saw Ryner and Ferris however they had encountered a young Alpha Stigma owner and rescued him from certain death. The two had paused in their search for the relics in order to return back to Roland and find him somewhere safe to live.

However upon returning to Roland their journey immediately meets its end as the two become entangled in the web of politics that Sion has spun to keep the land of Roland prosperous, so prosperous in fact that the people have begun calling him the Hero King. However dark shadows are moving around the land as Roland braces for war against the Gastark nation. With the Taboo Breaker squadron sent to eliminate escaped human experiments, a new and extremely powerful Alpha Stigma owner appearing in search of Ryner and Sion’s own dream for a future where everyone can nap peacefully becoming one of shadow and destruction, what will happen to Ryner and Ferris? 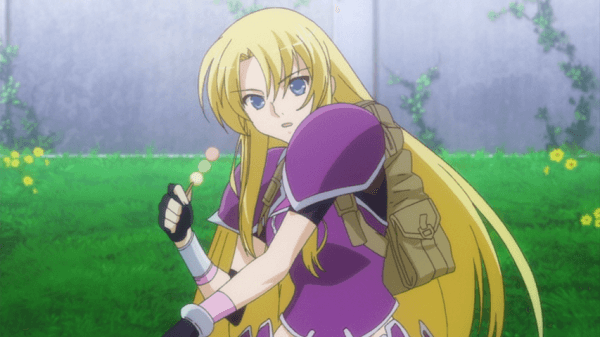 Multiple themes are explored throughout the second half of the series, including how the world treats those who are born with Alpha Stigmas with the treatment of the young child and what is revealed by the Alpha Stigma bearer seeking Ryner. Ryner, who usually would rather find a place to nap and believe that everything sucks (his own words) begins to come out on his own throughout the second half of the series as he begins to take matters into his own hands instead of letting the world pass him by.

Ferris and Ryner’s relationship is also explored further in Part two as the odd-couple pairing that began in Part One begins to flourish. Their interactions with one another are still the highlight of the series. Ferris’ past is also partially explained and the previously enigmatic swordswoman with a penchant for smacking Ryner around with her sword slowly comes out of her shell and sees Ryner as a true friend. 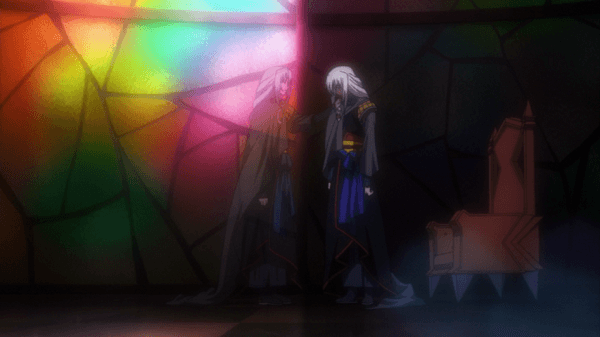 Multiple new elements are explained near the end of the series, including a large plot twist that ultimately ends with a “To Be Continued” feel. Now while this is understandable considering the light novel series that the anime is based off of ran for forty volumes, as such this is only part of the story, there has yet to be any sign of The Legend of the Legendary Heroes receiving a second season in Japan and thus viewers may never see what happens next despite the large cliffhanger of an ending.

Visuals:
The production values for Part Two remain very much the same as Part One though it is worth noting that Part Two features more action than the first half of the series, meaning that the impressive combat choreography and animation is all the more present in Part Two.  Magical attacks are impressively animated and powerful, though it does seem that, despite the large amount of spells available for his use, Ryner often re-uses certain spells to death (namely his lightning spell izuchi), with only brief uses of alternative magic and Ferris’ skill with a sword is the same as ever. 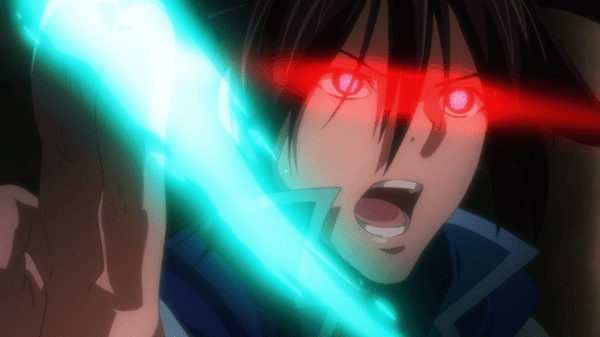 The show itself is full of lush coloring and beautiful background sets with a heavy medieval European theme. The characters themselves are well detailed and even undergo a number of outfit changes throughout Part Two which helps to freshen up the characters’ appearances after Part One.

Audio:
As one may assume, the same voice actors who handled Part One all retain their roles for Part Two as well. The English dub cast continues to deliver an admirable performance as they handle each character, with Ian Sinclair’s Ryner sounding better than ever. Luci Christian’s voicing of Ferris is exceptional this time around as we slowly begin to see Ferris show more emotion in her voice where there was none before. Part Two also contains the Japanese voice track for those who choose to listen to the original voice cast. 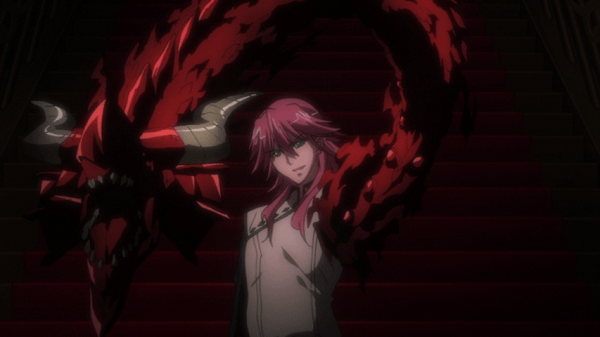 The background music for the show remains suitable and is at its best during the action sequences. There is one inserted song near the end of Part Two which did not receive any English translation, though it is still enjoyable as is. For Part Two we are given “Last Inferno” by Ceui as the opening song and “Filament of Light” by Takagi Ayahi as the ending song. Last Inferno has a suitable tone for a fantasy adventure title and is enjoyable to listen to, while Filament of Light is much softer and dramatic, making it a suitable fit for the series.

Extras:
The Legend of the Legendary Heroes Part Two contains a number of expected special features such as a clean version of the opening and ending song, the English trailer for this release and English trailers for past and upcoming FUNimation releases. Besides these few standard inclusions there are also two episode commentaries, one for Episode 21 and one for Episode 24.

Episode 21 features the ADR Director for the second half of The Legend of the Legendary Heroes, Joel McDonald and the voice of Sion, Eric Vale.  The two discuss other voice actors who are working on the same show as well as Eric’s convention experience with some unkind Jewelers. They spend a little bit of time speaking about the episode and about Sion, but mostly stay off-topic with some minor humor. 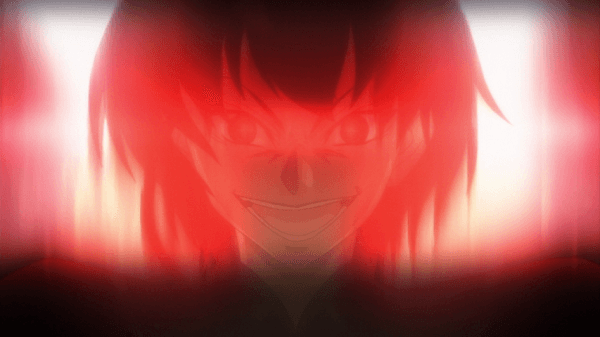 Episode 24 features the two main characters voice actors, Ian Sinclair as Ryner and Luci Christian as Ferris. The two can’t help but mention the redundancy of the title and mention how much they loved working on the show and acting out together as well as working together. The two discuss how multiple questions from their own little cheat sheet, ranging from how different the show is from past works, if they were affected by various scenes in the show such as the Alpha Stigma and Ferris’ past. This commentary is mildly humorous though it does not follow the final episode at all.

Overall:
The conclusion of The Legend of the Legendary Heroes Part Two will likely leave many viewers wanting more, despite the fact that there may never be a true conclusion to the journey of Ryner and Ferris. However this show is one of the best examples about how it’s not about the destination, but the journey itself. The fact that Part Two focuses almost entirely on Ferris and Ryner also is for the best, as their interactions with one another and character developments throughout the story is the best part of the entire series. By shedding the story presentation issues of the first half of the series, the story truly shines during Part Two, providing us an intriguing storyline with well-developed characters that will leave viewers hoping for a continuation somewhere down the line.