Overview:
There are many different types of games out there and one of the most diverse is the RPG genre. What began as a genre filled mostly as turn based titles which eventually became classified into JRPGs and SRPGs, the genre is now populated with action RPGs that even include watered down RPG mechanics to streamline the process.

There is another type of RPG that exists however, and that is the dungeon crawling one that is packed full of loot and in-depth stat management. While in recent years these types of games have become scarce, System Prisma and NIS America brought the ClaDun series to North American PSPs in recent years and now they have brought a PS3 based dungeon crawler in the form of Legasista. Does System Prisma’s effort to bring their stylized mechanics to the console create a worth experience?

Story:
In a world full of magic and ancient relics, a young man has traveled to the cursed tower for one reason and one reason only… to try and save his sister who has been turned into a crystal by a mysterious ancient relic. This cursed tower is the Ivy Tower which has been left alone for many years thanks to the fact that everyone believes that those who come near the place will die a horrible death. 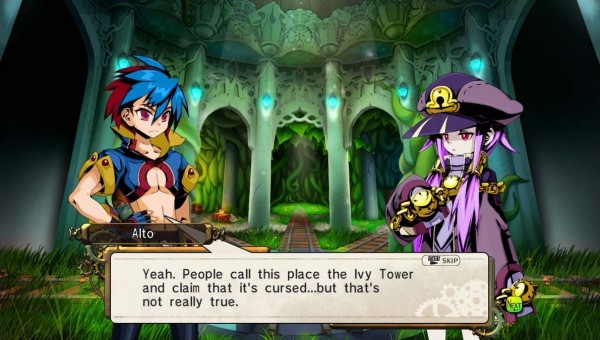 However upon arriving in the Ivy Tower, the young man named Alto Straiter actually finds the place to be quite hospitable, with strange sentient bean sprouts greeting him and mysterious young woman who quickly is nicknamed Ms. Dungeon. She quickly informs Alto that the device to save his sister is indeed within the many dungeons of the Ivy Tower but he should prepare for the dangers that await him.

Shortly after venturing into the dungeons he discovers the ancient weapon, a girl named Melize. However thanks to her millennium long dormancy period she has forgotten everything about her abilities and herself. Now Alto must try to recover Melize’s memory so she can break the curse upon his sister. However will things simply be that easy for this odd duo?

While Legasista’s storyline may be a bit simplistic at first, the game benefits greatly thanks to focus on only a small amount of characters and one central zone, only allowing dungeons as alternate areas. Because of this, players will be spending a lot of time learning about the Alto, Melize and the rest of the characters that they meet within the dungeons. 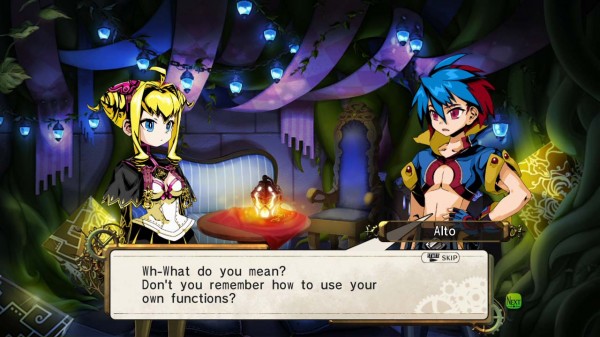 As such, Alto’s efforts to save his sister and Melize’s struggle with her feelings and past quickly become the focal point of the game’s storyline as the player begins to find themselves caring about their plight. Of course while the title may sound a bit dramatic, there are also plenty of comedic moments as well, with a nice balance between the two and a steady story progression to keep players eager to enter the next dungeon to find out will happen next.

Visuals:
With Legasista’s release on the PlayStation 3 the title is able to present some rather high quality, albeit simplistic, visuals. Most of the dungeons that the player enters will be quite colorful and varied with a number of different enemies found within their halls, though there are plenty of palette swaps made to extend the enemy roster. 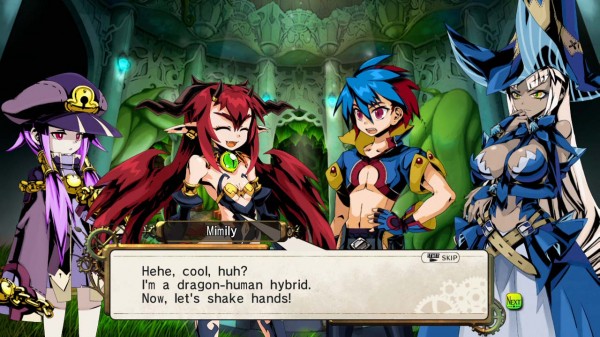 As for the characters themselves, their exploring sprites are also simplistic in nature, though this does lend itself well to the character creation mechanic which I will speak more on later. Where Legasista’s visuals do shine however is when the player witnesses a story segment as they are treated to some very impressive character designs with the main cast as their animated character portraits are highly detailed and expressive.

Audio:
It is worth noting that although NIS America usually provides an English dub for their releases of video games, Legasista only contains the original Japanese voice work. Of course this isn’t too much of a detriment to the title as the voice work done by the original team is top notch, especially when it comes to Melize and her childlike demeanor. On the other hand Legasista offers an enjoyable soundtrack with a number of different pieces of background music, though it is mostly your standard fare of fantasy styled music outside of a pleasant main theme song.

Gameplay:
At its core, Legasista is a dungeon crawling game where players will not only advance through the story by completing a number of floors within various dungeons, but also side-dungeons where characters can level grind and gather helpful items. As the player first enters the dungeons they are given a rather extensive tutorial which runs through all of the various intricacies of the dungeons, including the various trap types, poison types and even how equipment and other elements of the game work. This is a major boon to the title as it helps open it up to those who enjoy RPGs, but may not understand all of the intricacies of Legasista’s systems. 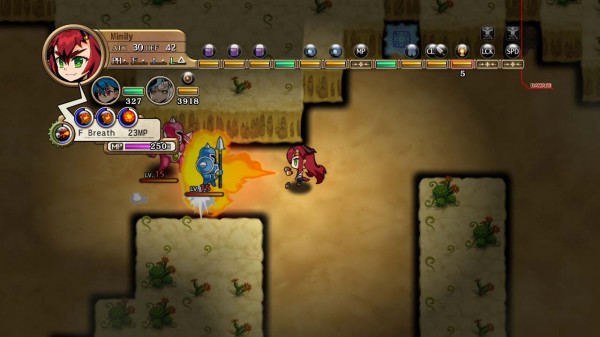 As the player fights through a number of dungeon levels they will quickly become accustomed to the title’s free moving battle system, often flanking enemies to deal more damage. While fighting against the various enemies in a dungeon, players will acquire a large amount of equipment as well as one-use items only usable within that floor of the dungeon.

In an interesting twist, most weapons cannot be equipped until the player returns to the Railyard (home base). Here is where some of the deepest elements of the game begin to come about, as players will have to make a number of complicated decisions revolving around how to equip and use their character. Rather than the more complicated Magic Circle used in past games of the same nature, gamers will need to worry about Legasista’s “Energy Frames” which allow players to equip a number of different items, such as their main weapon, various spells and armor that will help boost their various stats. 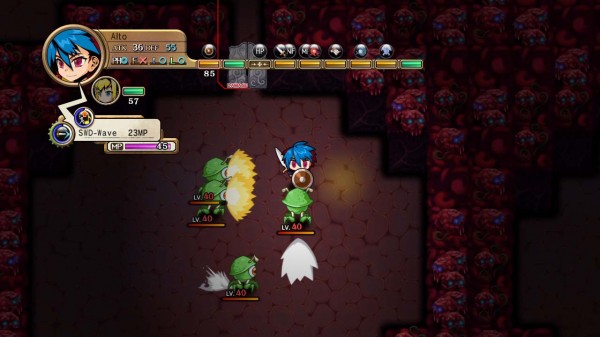 Energy Frames can be swapped out as often as the player feels like as most characters receive a number of different frames as they level up and most frames offer different bonuses such as certain types of equippable items to a larger Frame. This can often be quite an advantage to the player if handled correctly as the Energy Frame plays a double roll as a character’s health bar. While each Frame does contain a green health bar or two which can be healed from Heal Traps, items or spells, each equipped piece of equipment serves as a buffer between enemy damage and the player’s health. Though playing it safe with equipment also has its disadvantages as broken equipment is not usable within the dungeon, meaning if your weapon ends up busting then your character can be left nearly helpless.

Thankfully whenever the player enters into the dungeon, they are not alone. In fact players can bring a three member team with them later in the game where two of the characters will serve as support that can be switched to at any time, allowing for hurt members to recover or weaker teammates to gain levels safely. 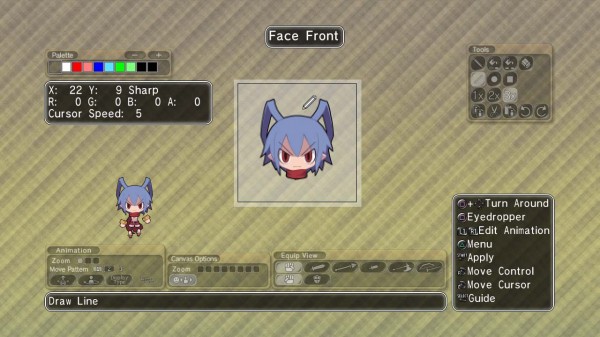 Thankfully, the player will never be lacking in allies as shortly into the game a character creation tool is unlocked. While players can take story characters into the dungeons freely, they can also take their own creations into each area to fight alongside them. The character creation tool is quite extensive, allowing players to easily create a dream-team of their favorite video game characters or even anime characters, though those who are artistically challenged or want special characters fast can simply import pre-built ones from their PC into the PS3 via a flash drive.

While Legasista does feel like it can become a grind fest, most of the difficult battles or dungeons the player faces are thanks to them being unfamiliar with the terrain or the enemy that they encountered. This means that some of these areas can be finished simply through smart tactical decisions or proper ally use, though grinding levels and equipment does help so those who prefer to avoid grinding games may wish to take note of that. 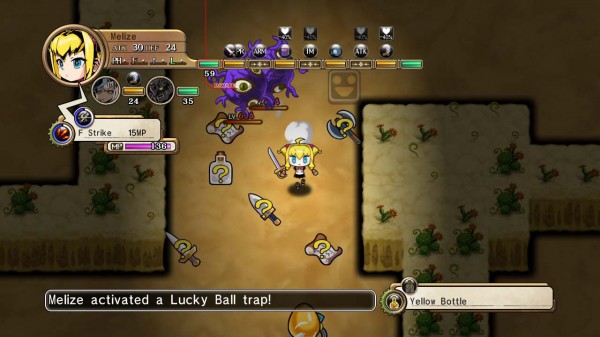 For those who enjoy grinding however, there is quite a lot to accomplish in the dungeons of Legasista. Outside of the main story dungeons, players can enter randomly generated dungeons called Ran-Geons which range in various difficulties and depth, allowing gamers to venture into deep areas full of difficult monsters and rare loot. With a level limit of 999 players can spend hours delving into a hundred floor dungeon in an effort to make their group the strongest around.

Overall:
Legasista takes a great dungeon crawling experience with a deep character creation mechanic and equipment management system and  combined it with a small cast of likable characters. By keeping the main world and set of characters nice and compact it helps players focus on what is given to them rather than what may be missing from the experience. While it may be a bit difficult for newcomers and those who don’t enjoy grinding for levels may be put off by the difficulty incline, Legasista provides countless hours of dungeon crawling enjoyment, moshi.