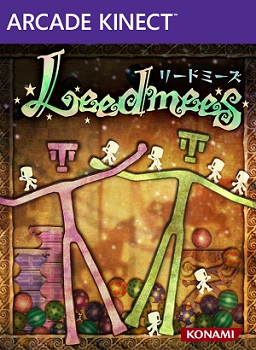 Overview:
Way back in 1991, video games were still starting out. A number of genres hadn’t even been discovered yet and many gameplay ideas were not even a blip on the radar. But that was the year something interesting was created. A game called Lemmings by DMA Design. Lemmings was a title that involved players providing ways through a level for little creatures, while also keeping them alive.

Fast forward twenty years and it is easy to say that the gaming industry has changed much since then. For example now we have the Kinect motion tracker for the Xbox 360, and Konami has a game with a number of similarities to Lemmings that makes full use of the Kinect’s abilities. Leedmees is the first Kinect Arcade title from Konami and the third ever released so far. Does Leedmees stand to make a name for itself with the combination of motion gaming and guiding small creatures?

Story:
Leedmee’s storyline is quite basic and pretty straightforward. As you begin your first level you will be greeted with a small bit of text which says that you were suddenly dropped into a mysterious world with no knowledge of how you even got there. You find that your body has been changed to a strange form and that these little white creatures are simply trying to go from place to place. 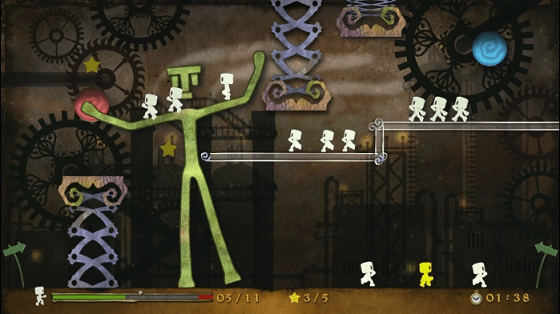 Only thing is, your body is now in their way. Seeing as you are blocking their way you feel that you should help these little creatures on their way as they seem to trust you to do so. The storyline is roughly as basic as it can get, but considering Leedmees is a puzzle title, it is enjoyable to see that there even is a storyline to go with the tiny puzzles.

Presentation:
Normally I would break this up into two categories, but it wouldn’t be really justifiable in this case. Leedmee’s graphics are relatively simple in the foreground, with the tiny white creatures and the player’s body having no complicated design. The backdrops are very interesting to see however, as they are well varied and are decent in quality.

The game’s music is suiting for a puzzle title such as this, with simple sounding music tracks varying depending what stage you are playing on. The little creatures also make a bit of noise when they grab onto you as well as when they are walking but you will be listening to the same music most of the time.

Gameplay:
At its core, Leedmees’ gameplay is quite simple, but most puzzles games are easy in description and difficult in execution. Players will play through different stages and each stage is designed differently. In each stage players must make sure that a certain number of creatures make it through to the red portal without too many dying in the process. 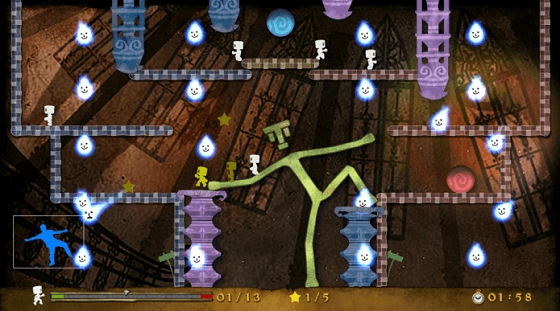 The creatures walk in a straight line and only stop to turn around when they walk into a wall or an upright limb, therefore you must create bridges and paths for them to walk around with by using your own body to pose for them. The player will do this in any way they can imagine, such as bending down so the creatures can climb onto their arm and then standing up with your arm extended to create a bridge or using your arms to create bridges, and any number of different ways.

If too many creatures die then you will be treated to a game over and must restart that stage. The creatures can die in any number of ways as they don’t pay any attention to their surroundings and can die from traps, falling a distance or even if you squish them yourself. While the first few levels may be rather simple, the puzzles do end up becoming quite hard as more traps are introduced and the time limit becomes a factor.

There are three different areas to play and ten stages in each. The puzzles can usually be solved in a few minutes, which is necessary as there is a time limit, which means that it is possible to finish all puzzles quickly. However, even though you only have to escort a minimum amount of creatures to the portal you can also have them grab one of five stars placed around the stage. Since each creature can only hold onto one star at a time, it creates quite a challenge to make sure you not only escort them all safely but also obtain all the stars in all the levels.

Besides playing the single player mode, there is also a multiplayer aspect to Leedmees. With local co-op only, players can bring a friend or family member and help escort them to the portal. This is made even more interesting when the portal is sometimes on one of the player’s body. Players must pass the creatures back and forth sometimes, but this can also be a bit of a furious endeavor. The Kinect seems to fail often when it comes to two player interactions and often misreads two matching arms or any number of actions needed to complete a level which can cause frustration and failure simply due to a problem with detection. 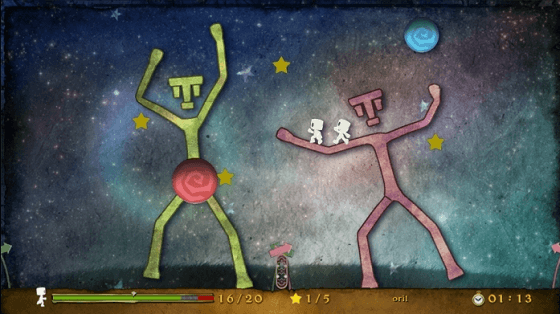 This is also a problem with the single player mode. Being a puzzle title that involves escorting a certain amount of the little white creatures to their destination alive within the time limit, there is a level of finesse required. While the Kinect performs admirably most of the time, occasionally your character’s movements will not follow your own and will jerk erratically which can kill any number of the little creatures through no fault of your own.

Overall:
Leedmees is an interesting little title which combines puzzles and full body motion tracking in a way never done before. The levels and stages are very interesting and although the game can possibly be quite short they can also be very complicated depending on whether or not you want to earn a perfect S ranking on each level. Plus any extended amount of gameplay can certainly cause a bit of fatigue on a players upper body simply because most of the poses with your arms extended out in various angles have to be held perfectly for a period of time, so sporadic playing is usually for the best.

If only the motion tracking had been a little bit better and the co-op gameplay didn’t have so many issues, then Leedmees would have been a great experience to play with a friend. Still despite these problems it is still a fun little title that puzzle lovers and those looking to get some use out of their Kinect will enjoy.