Overview:
Learn with Pokemon: Typing Adventure is Nintendo’s latest oddball Pokemon spin-off and takes the series down a path that honestly could never have been predicted. Just the idea of a Pokemon themed educational typing game seems somewhat ludicrous. Well as preposterous as it sounds, Pokemon: Typing Adventure is actually a pretty fun game, especially if you’re a kid.

This is certainly a game with an audience in mind. It isn’t necessarily a bad thing, it just means that it isn’t for everyone. For children however they won’t want to stop typing and it is all thanks to Pikachu and all his cuddly pals. 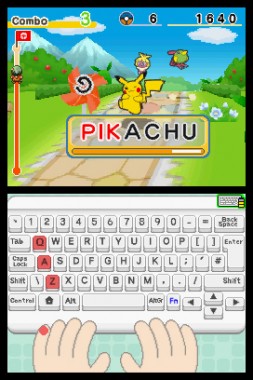 Gameplay:
Typing is something that has become a part of our everyday life with the rise of the home computer over the past 2 decades. As such, typing is just as important for children to learn now as handwriting is. There have been typing games in the past but none spring to mind that has such a colossal franchise as Pokemon attached to it. That is where the appeal of Pokemon: Typing Adventure comes in, it mixes lessons of typing with the colourful Pokemon world and its characters, to great success might I add.

While it is obvious that Pokemon: Typing Adventure is meant for children, there can be some fun to be had by adults even if they have already learnt to type. The reason being that at its core, Pokemon: Typing Adventure is an addictive game with puzzle and rhythm game aspects to it. For children they will find these aspects to be incredibly fun while also being educated in proper typing. It really is a winning formula.

The game essentially plays out pretty simply, with the player using a wireless keyboard that comes with the game to control the game and play the mini-games and catch Pokemon by spelling out their names. One problem that may be encountered with this title is its inherent lack of portability, it requires a table for stability to keep the 3DS and keyboard in place. But if you are learning to type you probably won’t be thinking of taking this game on to go with you. 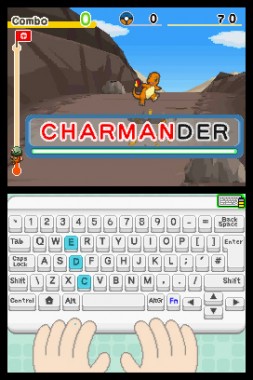 It is advised that you have at least a small amount of table space in order to play this game. This may be an issue to some who do not want a portable game that essentially defeats the purpose of portable gaming, but Learn with Pokemon: Typing Adventure is one of these games that defeats that purpose by being inherently lacking in portability. If you can get over this minor issue there shouldn’t be a problem with your experience. It would be strange however if you were planning on taking this keyboard around with you on the go.

Learn with Pokemon: Typing Adventure is truly an adventure, literally across the keyboard that comes with the game. As you progress through the game you play different typing missions for each key of the keyboard with a variety of Pokemon appearing depending upon what key you are on. You can capture Pokemon by typing their name in certain levels. Other mission types include typing the letter or key as it appears to gain points. It is all very simple yet so very addictive. Throughout the course of these missions you develop and earn more points for your trainer, with this the game tracks your progress as you learn to type. This is great as it gives you a means to look at how far you have come and everything that you have learnt.

Nintendo have really created a winning formula with Pokemon: Typing Adventure by bringing together a seemingly monotonous education lesson of typing and the magical exciting world of Pokemon. This game will no doubt be a hit with the kids and parents looking for a teaching tool that will actually hold their children’s attention, Pokemon will have no problem doing just that. 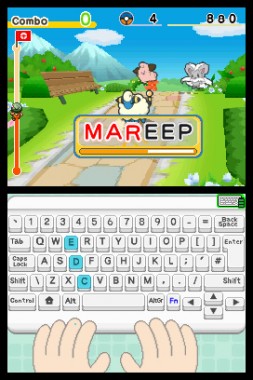 Visuals and Audio:
The aesthetics of Learn with Pokemon: Typing Adventure are very appealing for the younger audience with the art style of choice being super-deformed cutesy Pokemon. It may appear to be a little childish to teens or older audiences, but this game really isn’t made for them.

For the children that this game is made for the game does a great job visually and will no doubt enchant them as they learn to type with its colourful world and cute yet cool character designs.

Pokemon: Typing Adventure’s soundtrack is not exactly anything worth writing home about, though it does do an efficient enough job. The main theme of Typing Adventure is clearly the stand-out while the majority of other tracks in the game feel a little inconsequential and benign. At the end of the day however music won’t make too big of an impact on this game’s target audience. It does the job, but it’s nothing special.