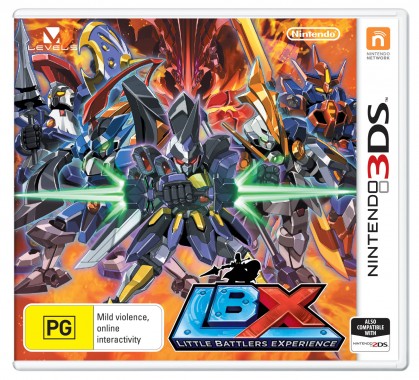 LBX: Little Battlers eXperience is an upgraded 3DS port of an upgraded PSP game based off the Japanese anime Danball Senki, known outside of Japan as Little Battlers eXperience. Unbeknownst to myself and most likely many others, the franchise has actually been in existence for about four years and spawns several other handheld titles, however this 3DS title is the first to receive a full English localisation effort. In what is basically a mix between Pokemon, Beyblades and Transformers, LBX centers around tiny customisable robot fighting machines that battle it out in a children’s game that soon turns into a battle to save the world. Is the game as exciting as it sounds? Read on to find out. 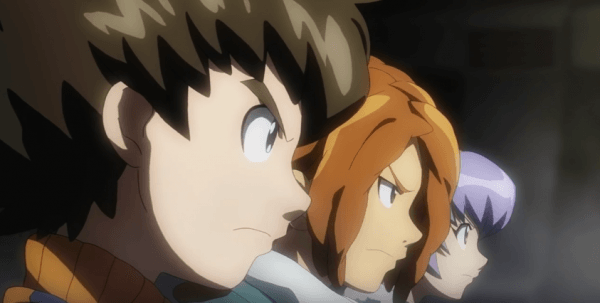 Young Van Yamato is an ambitious teenager who, along with everyone else in this game, loves to play LBX. Initially he doesn’t even own one thanks to his strict mother, but through a strange series of events he is sort of given one and the real story starts from there as it turns out Van’s LBX is very sought after. The story will drag you in with its many mysteries and enjoyable lore and is enough to keep you engaged and provide enough motivation to reach the next story objective. While most of the characters are pretty standard anime cliches these archetypes are done well enough here and you won’t hate any of the main characters, some may even surprise you.

Unfortunately as far as game modes go story mode is all there is apart from local multiplayer which thankfully can support up to 6 players at once as long as all of them have their own game card. Games with large array customisable objects always lend themselves well to online multiplayer allowing the user to express their creativity so it’s very unfortunate that their is no online option to speak of here which would have been great for replay value. There is a New Game+ option to help in that regard though. 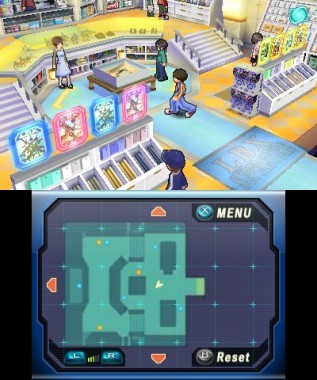 LBX is a very typical action JRPG. 40% of your time in game will be spent running around the over world talking to people to advance the story, another 40% will be spent in LBX battles and another 20% spent tweaking and customising those LBX.

The over world is well detailed with lots of varied locations and just enough events to help spice up the rather tiresome task of walking from place to place. It’s filled with unique NPC’s to battle, shops to buy upgrades from, side quests to complete and ‘dungeon’ areas where random battles ensue during story sections. These random battles work like Pokemon in that you don’t actually see anything jump you with only a text prompt to tell you that you are ‘surrounded’, which in my opinion is sorely outdated. The upside of these battles is they allow you to gain more experience which increases your player level and level of the parts you have equipped to your LBX, as well as obtain more pieces for your LBX in the form of random drops. They also allow you to play more LBX battles, which are one of the strongest points of the game. 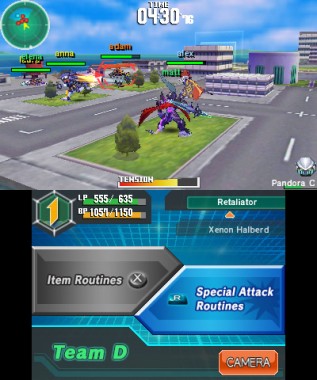 LBX battles are short bursts of 3D arena action and are really the only time action applies to this action JRPG. At the beginning your battles will basically be button mashing the attack button with occasional guarding, however as you progress and unlock more weapon types, abilities and special attack routines the battle system really opens up to new possibilities. Learning when to attack, run, jump and defend is crucial as is managing your battery (which when fully drained won’t allow you to increase the chance meter), tension (stamina, basically) and chance (a gauge which allows you to use special attack routines) meters. The battle system is exciting, fast paced and it’s relatively simple to learn thanks to the great job the game does at easing you into the what can be overwhelming amount of components of battle.

There are different rule sets for matches and different match types such as 2v2 and 3v3 that offer even more variety in the battles. The team battles are perhaps the strongest in my opinion, as you are allowed to swap control of any of your parties LBX while in the match on the fly. The opponent and partner AI is adequately adept, with opponents offering a decent amount of challenge and your AI buddies being able to themselves well without much babysitting from yourself. 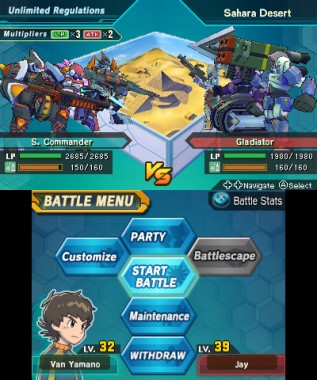 As for how your LBX actually feels to control in battle, this will differ depending on your setup. Sometimes it can feel a bit clunky to control the LBX, with jumping most notably feeling a bit on the stiff side with a heavy landing lag, but for the most part it’s fluid and responsive. The speed boost function allows you to quickly close the gap between you and your opponent or flee from them and is fun to use. The single attack button which can be held or pressed is used in conjunction with the control pad to offer a variety of different combos for the different weapon types on offer. As your skill improves you will learn which ones work best and which combos can link into your special attack routines which are satisfying to pull off. Something I wasn’t too big a fan of is dodging other players’ special attacks. When a player uses a special attack it freezes you in place, giving you one of three options to jump, side step or guard. This is fine as there is normally a clear choice to make depending on the attack, however this system brings the action to a halt and makes me wonder why non-cinematic special attacks weren’t simply handled in real time. Another issue is using the D-pad to switch lock on targets, which is cumbersome when you need to keep your thumb on the circle pad to keep control of your LBX.

This variety in battles is what keeps the game getting stale, and the main source of this variety is in the fantastic LBX customisation system, with 130 different complete sets of armour and 4000+ individual pieces. Customization is great, offering the player to change the head, left arm, right arm, torso and legs of an LBX. You then equip a weapon from one of 8 weapon types to each hand, with the game offering you the ability to include two weapon setups for each hand that can be freely switched between during battle. Then you have an inner chip set to customise which can increase your meters, grant special abilities such as increased damage output when attacking with a certain weapon and affect how many special attack routines you can equip. All this freedom lets you create an LBX that suits your play style and how you want your LBX to look. 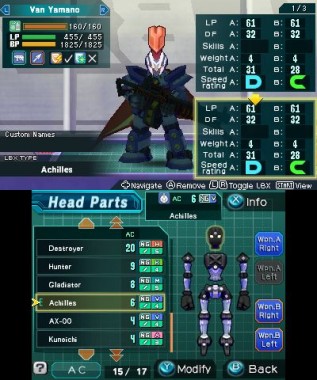 Customizing greatly affects the way you will play the game in a heap of different way. Different weapon combinations give rise to new strategies and combos but may have setbacks in other ways. For example, dual wielding swords give you access to more combos, however will lower your defensive capabilities. Equipping guns will make you play a more long range game, forcing you to keep distance from your opponent. Equipping heavier parts will increase your defense but also leave your LBX’s speed rating low, making it harder to move around the arena. It’s your LBX and you’re free to play your way. Players will appreciate the ability to save up to 30 different load outs which you can easily switch between at any time.

LBX sports two main visual styles. Animated cutscenes and the still character shots during talking cutscenes use a crisp traditional anime style. These scenes are animated really well and although there is a small loss in quality due to video compression, they still manage to look good. Then you have the main graphics which do their best to utilise the hardware capabilities of the 3DS. 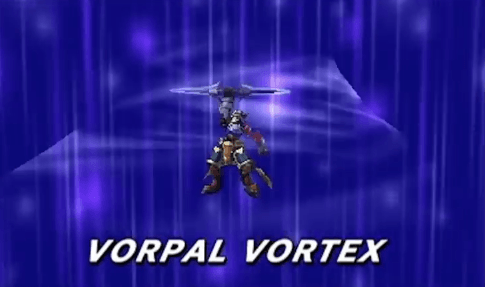 The 3D models and environments are well-detailed with what appears to be a slight cel-shading look applied to the characters and the LBX robots. The actual battle environments look a little more bland with a more plain 3D style, however considering the hardware they still look decent. I think applying a more stylistic graphical approach would have been beneficial but what we have now is decent enough. The LBX themselves have great style to them with many different looks to all the armour from knights to wolves to tanks and more. They are a joy to create and look at, making battling with them even more enjoyable.

A map of the world map on the bottom screen goes a long way to helping you never get lost and marks out useful information like NPC’s that can be battled, save points and n which direction to head to get to your current objective. For those that forgot why the 3DS is called so (I admit I haven’t touched the slider in a long time) LBX gives you a reason to put the 3D on. It really pops in LBX especially during battles, giving you a great sense of depth as to where your robot is placed in the 3D battle arena along with looking great. 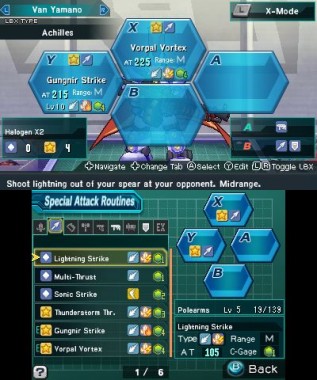 As with most Level-5 titles the music in this game is great, fitting the tone and pace at all times from cheerful over world to epic battle. The voice acting is also top notch, with everyone having a unique but fitting sound and delivering their lines well.

The audio for the battles is just as good, with all kinds of crazy and satisfying sound effects for the different weapons and special attack routines that can be pulled off. The announcer in battles also makes the whole thing feel like a massive sport, yelling battle start and the attack names whenever you start a special attack routine to give the game a cool, arcade feel. In a nice touch characters will also comment during battle depending on the situation, helping the player remember the robot is fighting in a tiny arena while its owner looks on from above. 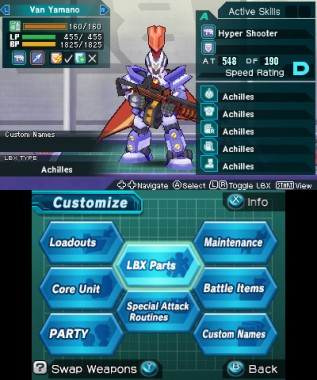 LBX features terrific customisation, an action packed (yet cumbersome at times) battle system and an engaging story mode. While local multiplayer doesn’t quite fill the void left by the omission of an online mode, the story mode and endgame is plentiful enough to keep you playing for hours on end. With decent visuals and great audio presentation for a handheld title, if you like typical JRPG’s, customisation or mechs then you should definitely give LBX: Little Battlers eXperience a go.