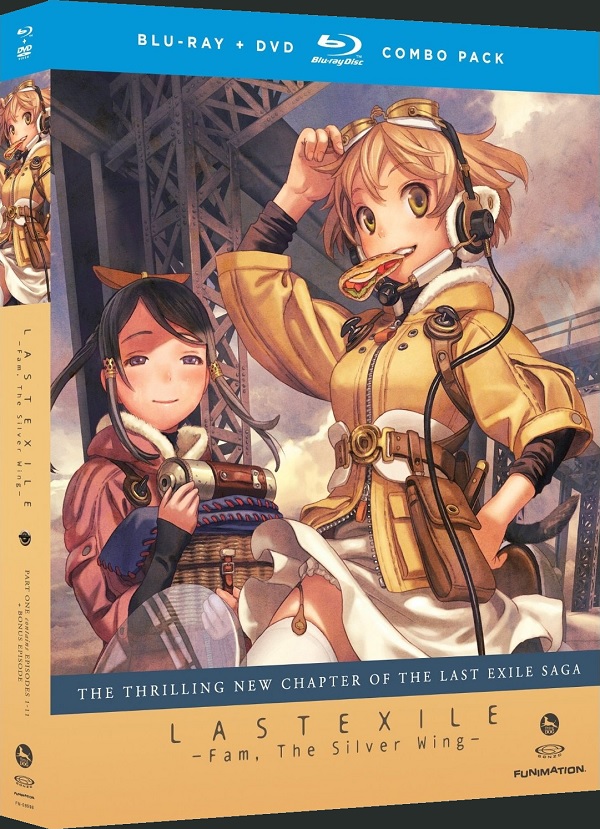 Overview
Gonzo used to be a well-known anime studio that produced numerous hit anime every year. Despite having some rather popular creations and adaptations, over their history, Gonzo has recently fallen on hard times. Lately the studio has been on the rise once again, but for a few years they struggled to produce even one anime a year. During this time frame they brought out a series many anime fans may have seen before, Last Exile.

Eight years after the first season aired, the studio brought Last Exile: Fam, The Silver Wing to anime viewers, and now a full ten years after the series’ debut, FUNimation has brought the series to North America. After being away from the spotlight for over a decade, does this second season of Last Exile manage to successfully continue the story?

Story
A few years after events of the first season, Last Exile: Fam, The Silver Wing Part 1 takes place on Earth where two girls are working with Sky Pirates in an effort to simply get by and enjoy life. Fam Fan Fan and her navigator Giselle are considered the best pair of pirates in the organization; with the two of them paired together they have managed to snag numerous flying ships with no casualties and great rewards. 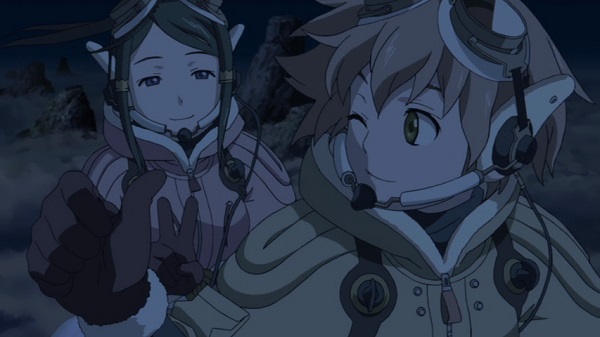 Living the life of Sky Pirates, the two are able to enjoy life as it is, paying little attention to the movements of the world powers. However when the Ades Federation, a powerful nation consisting of people who remained on Earth when many others fled the planet when things started going to hell, violates negotiation terms and ruthlessly attacks the Princesses of the nation of Turan.

Seeing not only the chance to land a massive score in the form of Turan’s flagship, but also leave the nation of Turan indebted to them, Fam, Giselle and the rest of the Sky Pirates make an attempt to save the Princesses, however they only are able to save the youngest princess, Millia, from the grasp of the Ades fleet. Despite their best efforts, the Ades Federation razes Turan to the ground, slaughtering most of its people, including Millia’s father.

With Millia being the last remaining member of the Turan royal family not dead or held captive, Fam swears that she will use her pirating skills to not only acquire Millia a fleet of warships, but also a chance to take her homeland back. However when their first target turns out to be one of the most mysterious ships in the world, the three find themselves with a stronger military might than they may have ever dreamed of. However with weapons capable of destroying cities and enough influence to slaughter naysayers in an instant with little care for the consequences, the Ades Federation proves to be an insurmountable obstacle in their path. 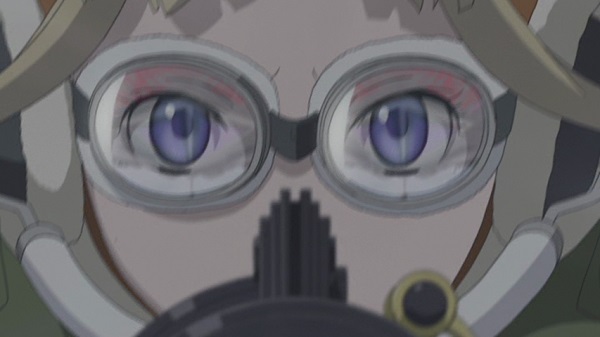 With only a paltry eleven episodes in part one, though a recap episode is included to try and balance things out a bit, pacing is a major issue with Last Exile: Fam, The Silver Wing. Rather than have transitional episodes or building storylines, the plot ricochets from place to place. While this is great since it makes use of the limited amount of time available to build the world and characters in the series, it does create a whiplash that may leave viewers double checking whether or not they missed something between episodes or skipped ahead on accident.

However thanks to the jumpy nature of the plot, Last Exile: Fam, The Silver Wing Part 1 has managed to establish a living and breathing world full of different kinds of people, numerous interesting tidbits to add to the mechanics of the plot and more. By focusing heavily on world building throughout this first half, viewers learn of the various nations that come into play and most of the reasons for their actions, making the Ades Federation worldwide conquest seem all the more grander thanks to the amount of effort put into establishing the world. 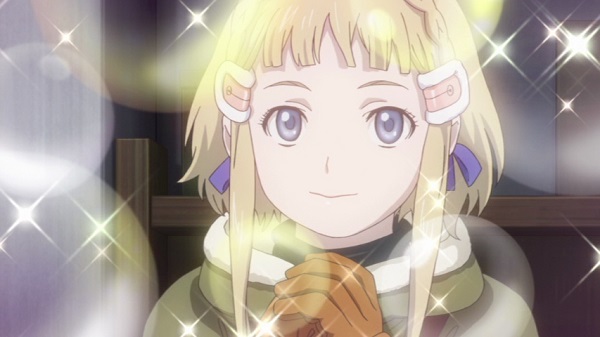 However thanks to the grand scale of things, the series’ focus of Fam, Giselle and even Millia at times feels like a bit of a waste. By presenting viewers with numerous moving pieces and establishing a well-developed world, these three and their goals feel small in comparison. Through this first half Millia’s quest for vengeance and the rebuilding of her nation feels half-hearted at best, especially with how quickly things go south for them at the end of this half of the series. By leaving viewers with a flashback into a whiplash of a cliffhanger outside of the flashback, things appear to be revving up for Part 2, though whether or not that will be the case has yet to be seen.

Visuals
At times, Last Exile: Fam, The Silver Wing Part 1 is gorgeous to behold with its steam punk take on flying ships, however other times everything feels very clunky and poorly blended together. You see, there is quite a bit of CG used in the series as every air ship is specially designed in CG and then the characters and the rest of the world are drawn using standard animation techniques. 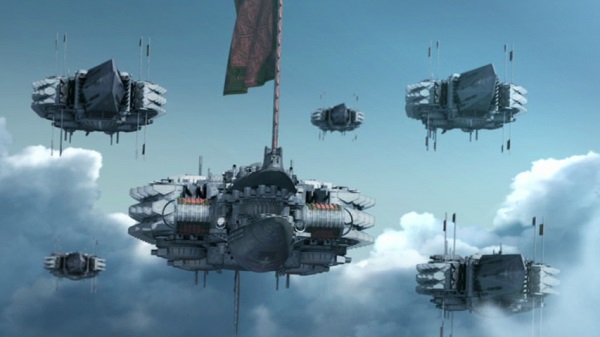 Thanks to this, many of the aerial battles can leave you at the edge of your seat as Fam’s smaller ship navigates around behemoths with cannons capable of demolishing cities. Outside of the battles, most of the scenery is nicely detailed and the characters are nicely animated, though there are some noticeable drops in facial animations in these non-combat scenes.

Audio
It is worth noting that by the time Last Exile: Fam, The Silver Wing Part 1 hits stores in North America, it is almost ten years after the series was first released in North America. As such, FUNimation did not manage to retain the same voice actors for the few returning characters from Last Exile and instead they have been recast. That being said, the English dub is nicely handled for the most part, though Greg Ayres’ portrayal of Dio leaves a lot to be desired. One nice touch that is worth mentioning is that there is some Russian mixed in with the English dub when the characters begin interacting with the northernmost region. 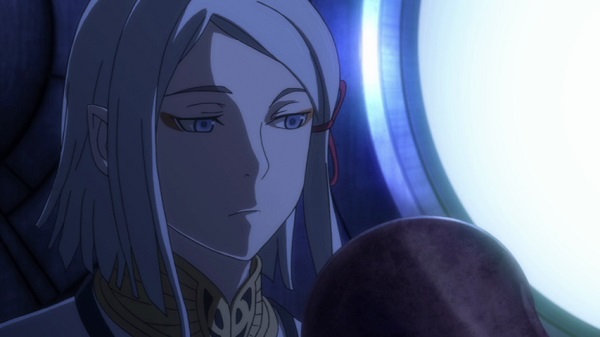 As for the first half’s soundtrack, there are numerous background tracks which are quite striking and these are used efficiently for dramatic sequences. The opening theme “Buddy” by Maaya Sakamoto and the ending theme “Starboard” by Hitomi Kuroishi are fitting for a series such as this, especially when a special version for the ending theme is used.

Extras
Last Exile: Fam, The Silver Wing Part 1 comes with a number of on-disc bonus features, though it is worth noting that nearly all of the content is original Japanese promo material. There are textless versions of the ending themes and opening theme, a commercial collection, a 3 minute long “Friday Night” anime CM series in Japanese, a promo video from the Fam Event and trailers for other FUNimation releases. 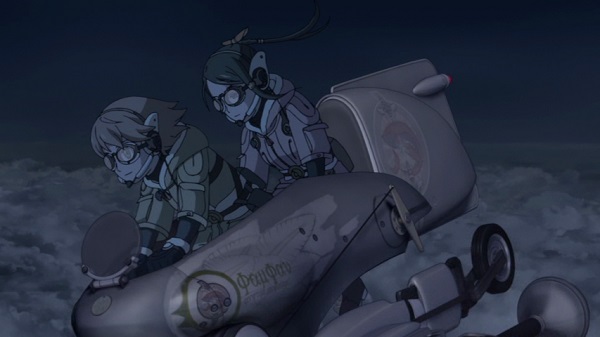 Alongside these standard inclusions there is the first part of an Anime Expo 2011 interview with the Japanese staff of the series and two episode commentaries. Episode 1’s commentary features voice director Christopher Bevins, Leah Clarke who voices Giselle, and Carrie Savage who handles the voice of Princess Millia. The second episode commentary is for episode 11 and featuers Jad Saxton, the voice of Fam Fan Fan, Jamie Marchi who voices Liliana and Duncan Brannan, the voice of Luscinia. Both of these commentaries are rather enjoyable to listen to and mostly include on-episode discussion.

Overall
Last Exile: Fam, The Silver Wing Part 1 helps establish a detailed world full of various nations and spices things up with some exciting and intense combat sequences and ludicrous but ultimately successful planning by the main characters in these situations, if only they felt actually integral to the story rather than simply moving within it. The series’ limited length leaves a lot to be desired in the way of pacing and character development, but lays the groundwork for plenty of developments to occur throughout the second half of the series.