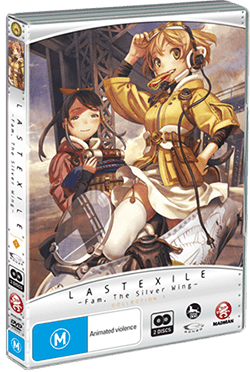 Overview
A number of years ago, the original Last Exile captivated us with its steam punk setting, airships bristling with cannons, compelling characters and a story that was quite literally out of this world. After a long absence the series returns as Fam, The Silver Wing, offering a sequel with a new cast of characters as well as some familiar faces.

Two years after the show originally aired in Japan, Madman brings the second season over with a fresh take on the Last Exile universe. Does Fam, The Silver Wing live up to fan expectations while staying accessible for newcomers? 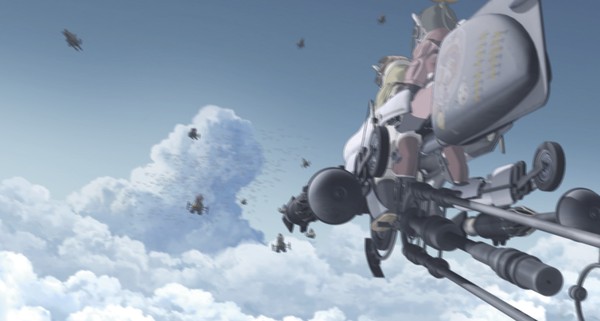 Story
For those new to the series, Last Exile: Fam, The Silverwing comes with an extensive back story. Several years after the climactic conclusion of Last Exile, the planet is once again clean and fertile. A vast portion of humanity has returned to the surface from orbit, after escaping on colossal ships known as Exiles. The plot centres on the young sky pirate, Fam, and her good friend and navigator Giselle as they roam the skies in their speedy Vanship searching for larger airships to snag and plunder.

Last Exile has a truly wonderful setting, combining steam punk with science fiction elements that fans of space operas and political crises would love. Just replace space with sky and spaceships with intricate airships instead. Fam, The Silverwing retains this originality from its predecessor but with notable changes. Technology has improved and so weapons and vehicles now look different. Gone are the more archaic airships with musket-wielding linesmen, replaced with sleeker but more heavily armed ships. This makes the series more realistic, as it only makes sense for a sequel set several years in the future to feature newer technology. 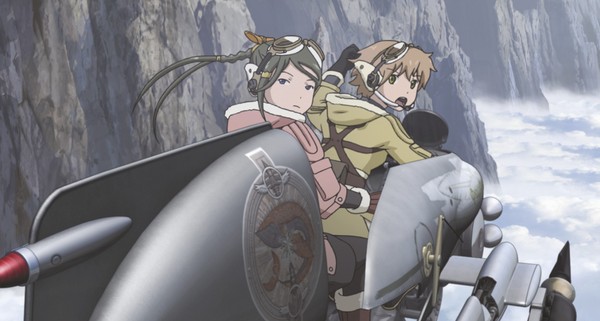 It doesn’t take long for Fam and Giselle to become caught up in a larger-than-life conflict, as the dominating Ades Federation, led by Luscinia, declares war on the smaller kingdom of Turan before swiftly annihilating it. Turan’s king is on his deathbed and so responsibility passes to two young princesses, one of which is captured almost instantly. Straight away you’re hooked in the plot, loving the chemistry between Fam and Giselle while trying to figure out the motives behind some really mysterious (almost alien) characters. Luscinia is a pragmatic and cold man, but he’s not a maniac. What is he trying to accomplish by reducing the world’s population, thinking that the planet isn’t ready to sustain the returnees? With Princess Millia representing the last bastion of Turan, she is an obvious target for the sweeping Ades Federation.

Part 1 establishes most of the relationships and narrative of the series, and it’s filled with intrigue from the second episode onwards. The plot becomes even grander when more nations are placed on the chessboard, including the Russian-speaking Glacies and the Anatoray Kingdom. Those who love strategy and tactical battles will savour every grand ship battle in this series. 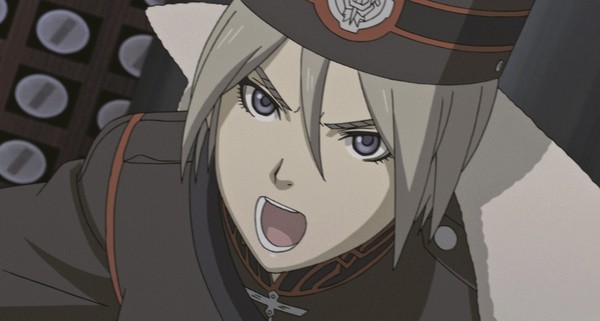 Returning fans will be glad to see several familiar faces, including Tatiana, Dio and even little Alvis, who is voiced by a different voice actress. Fam is your typical optimistic and stubborn, yet empathetic main character. She is dedicated to Millia and to see Turan rise again little by little, even if it starts from a small room on a ship.

Visuals
While earning something of a mixed reputation, Gonzo has done a great job with the Last Exile series and Fam, The Silver Wing is no exception. Range Murata’s character designs are beautifully animated and make you feel for the people in the show, despite being perhaps not as compellingly presented as the characters from the original Last Exile which felt tighter and more focused.

The interesting steam punk setting means that there’s always something new to see, as the world of the Last Exile borrows much from ours yet is incredibly foreign. CG is used heavily for ships and aerial battles but it presents an awesome spectacle rather than getting in the way and jarring the audience. 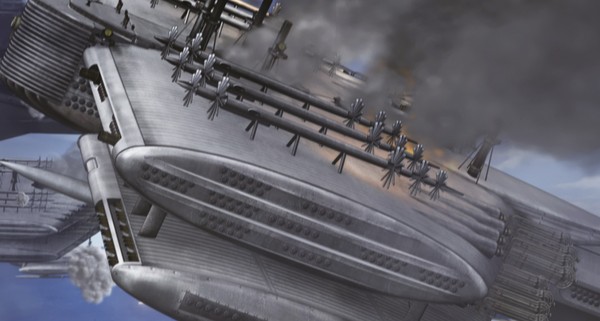 Audio
The highlight in the audio department is most definitely the sound track, with its classical folk-inspired strings, flutes and acoustic guitars making for a fantastical experience that puts you in a dramatic fairytale, whether it’s a fast-paced scene or a laid back episode.

The voice work is also handled well, but returning characters from the original series are voiced by different people in the English dub, as it’s been almost a decade since FUNimation released Last Exile. While most of the characters sound fine, Dio’s English misses the mark. 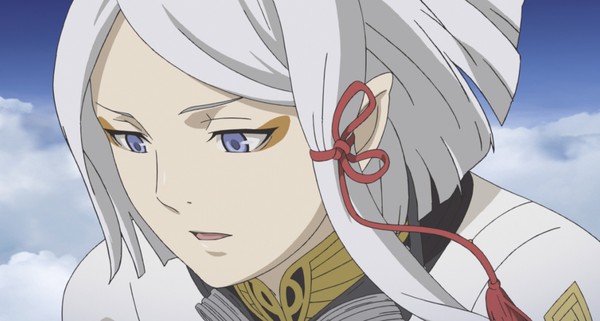 A great, exotic touch is the inclusion of Russian for the people of Glacies. Unfortunately, there is only one native speaker who voices Viola and sounds perfect, but the others sound completely garbled which is a shame. It’s still a worthy effort and it’s always a pleasure hearing other languages in anime.

Extras
Surprisingly, there are plenty of extras in Last Exile: Fam, The Silver Wing Part 1. Episode commentaries, textless openings and endings and trailers aside, buyers get a whole lot more such as Anime Expo 2011: Part 1, Fam Event Opening Movie and the spinoff anime CM series “Friday Night”, episodes 1 to 7 known as Kinyo no Yoru. This huge line up makes up for the relatively short first half of the series.

Overall
Part 1 of Fam, The Silver Wing launches what is surely an epic tale of political intrigue, war strategies and a fun, well-developed cast of characters. The turmoil and grand scale of events will have you on the edge of your seat but you will also be left feeling a little confused if you haven’t seen the original Last Exile. Being a sequel, it’s highly recommended to go back and watch it first. After seeing Part 1 it seems like Fam, The Silver Wing might not reach the lofty heights of its predecessor, but it’s still great when considering its fresh story and setting. 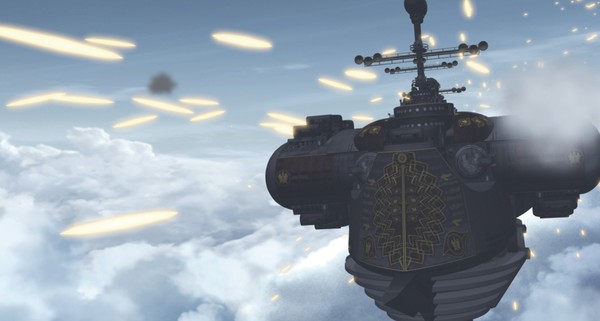 The pacing does suffer, however, as the odd number of 11 episodes and an unnecessary flashback episode causes the narrative to jump a little at the start of some episodes. There is even time for a bit of filler in some scenes, as Fam takes a break from the action to bond with her comrades. That being said, the intriguing mystique of the main villain, his plans for the world and the spectacular aerial battles will have you wanting to see more.