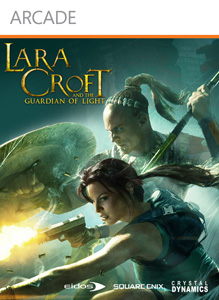 Story
“Lara Croft and the Guardian of Light is the first ever co-op multiplayer action/adventure game featuring Lara Croft. This brand new adventure combines the hallmarks of the Tomb Raider franchise, including exploration and discovery, platforming, and puzzle solving combined with character progression, fun fast-paced combat, and elements of human cooperation and competition.” [Via Xbox.com]

While the overall story isn’t amazing, there is a slight story there. You find the mirror of smoke, but some bad guys take it from you. Supposedly they didn’t know about the curse, and now have unleashed a great evil upon the world. It is up to Lara Croft to save the day. So while the story isn’t amazing, there is at least a small reason you are going through all these puzzles.

Gameplay
The main focus of Lara Croft and the Guardian of Light is the co-op, as well as the puzzles located throughout the game. Sadly, online co-op is unavailable until September 28th, so until then couch co-op will have to do. It may be hard, but managing to convincing a friend (or girlfriend *wink wink*) to come over and play this game with you is completely worth it. The game puts slight alterations in the levels in order to take full advantage of two players attempting to solve the puzzles. Have you ever played a single player puzzle game at your house, while you talk to a friend playing the exact same game over at his house? Well this game is a lot like that, except now you are playing together attempting to solve the puzzles. There is a lot of fun to be had, and quite worth the work it takes to get a friend to come over.

Throughout the game there are collectibles that will increase the strengths of your character. Collecting them can be as simple as finding them somewhere in the level, or as challenging as completing a reward challenge on the level. Reward challenges are small little tasks that can be as easy as jumping over the river without getting wet, or as hard as beating a certain boss in less than two minutes. Weapons can be obtained in the same manner, and you can outfit your character with up to 4 weapons at one time. If 4 weapons aren’t enough for you, you can always switch out by going to the menu and selecting other weapons.

The significant differences found in the co-op and single player modes prevents drop in co-op, but luckily all weapons carry over to either mode. You can always beat the game in single player and then hop over to co-op with a friend and bring all your awesome relics and weaponry with you. The ability to carry over all your stuff lets you show off just how awesome you are.

Leaderboards are also located in the game. While the main purpose of the game is to solve the puzzles and enjoy yourself, there are leaderboards for those of you who enjoy time trials. Compete against people all over the world for best times and best scores in a level. While leaderboards aren’t the most awe inspiring addition, there are many people out there who look forward to spending hours upon hours (or simply glitching) on the exact same level just be on top of the leaderboards.

Audio & Graphics
The audio in the game is forgettable. The voice acting is not as bad but the lines that are said are pretty cheesy and pointless. I don’t blame the voice actors for the cheesy lines since it is the writers fault, but having to hear a terrible one liner every time you kill a big monster or find something new gets annoying.

The graphics on the other hand are superb for an Arcade game. Admittedly the opening and ending scenes are disappointing slideshow style scenes, but the rest of the scenes are good. There is also a vertical feel to the levels, and each level is extremely cool to look at and admire. On the down side bodies fade into non existence, and shrapnel disappears shortly after forming but this is to be expected from an arcade game.

Achievements
Take note that I reveal the Secret Achievements below as well, but they just name 2 of the bosses and are progression based. The other achievements pretty much have you sampling everything there is to do within the game, whether it be finishing your first mission based reward challenge or obtaining a good score on any level. There is even an achievement for finding all 10 skulls on at least one level. There are some co-op achievements as well, which can be done with a second controller. It may require you to do some tricky controller use but it is possible. The final achievement “Tomb Raider” requires you to basically do everything within the game, and will take a while but will give achievement hunters a reason for actually collecting all the stuff in the game (Other than having epic abilities and weapons).

There are also two avatar awards that you can obtain by beating the game.

Overview
While the overall story is lacking, and the audio is forgettable the rest of the game is superb. The graphics are beautiful and the puzzles are great. With slightly altered levels for co-op it creates a fun experience for both single player and co-op. There are tons of stuff to collect and unlock, as well as bonus objectives to unlock even more rewards in game. While this game has a huge emphasis on co-op, the current lack of online co-op ruins some of the game for those who don’t have anyone to play with at home. Luckily the first DLC is promised to be free and 4 others are promised to be following it. September 28th is the current date when online Co-op will be patched into the game for free and when that date hits this game is going to get a whole lot better. Hopefully it won’t be too late.
I give Lara Croft and the Guardian of Light