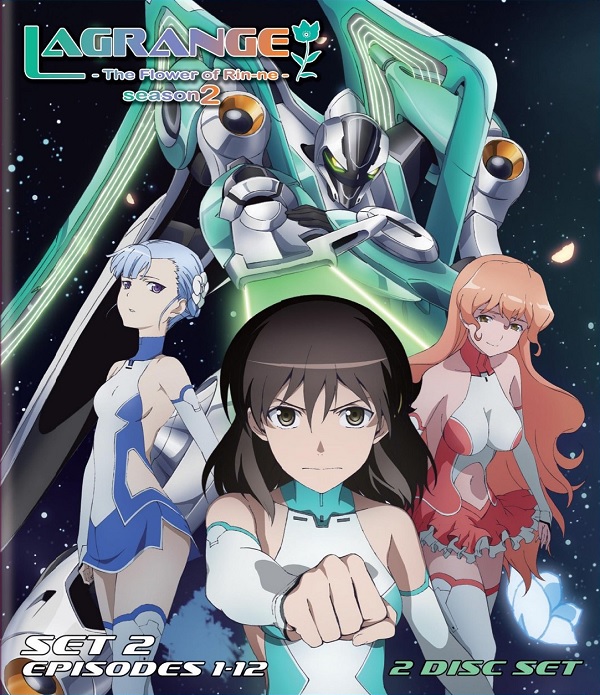 Overview
While the events that occurred during the first season of Lagrange managed to tell an enjoyable story of three girls coming together as friends despite their differences and the fact that two of the girls happened to be from warring alien forces. Despite having a decent ending, viewers were left with numerous questions by the time the first season ended and as such, the second season of Lagrange: The Flower of Rin-ne has been released to try and complete the story.  Is this second season as enjoyable as the first or does it lose its way trying to tie everything together?

Story
Now it is worth noting right away that this release does not contain the Kamogawa Days OVA that was released in Japan between the first and second anime season. This is disappointing as, while there are no major developments in this forty five minute OVA, it is something fans would have been able to look forward to as it covers showed a number of events that took place in the time that passed between the two seasons. 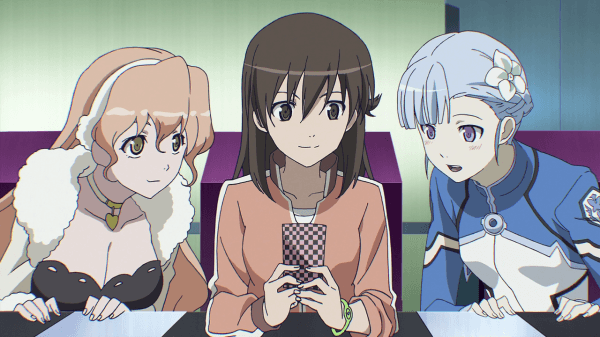 Anyways, Lagrange: The Flower of Rin-ne Season Two takes place a number of months after the events of the first season. With Lan back at home with the rest of the Le Garite forces and Muginami on the run with the De Metrio army, Madoka has spent the last few months trying to keep herself busy with all of the activities that The Jersey Club takes on. Despite how happy she seems on the surface, Madoka has no idea what to do with her future as evidenced by her teacher pestering her about what she will do after high school, and she is clearly distraught by the fact that her two closest friends are gone and she can no longer pilot the Vox Aura.

As luck would have it, both Lan and Muginami return to Earth one after another but this is far from the happy reunion that Madoka was hoping for. Lan has returned to seek Madoka’s help with something that her people require while Muginami is also working for her forces and looking to prevent Madoka from trying to activate her Vox ever again. Thankfully the fact that these three girls are at odds with one another is resolved within the first few episodes and the close-knit friends take asylum on Earth once more. 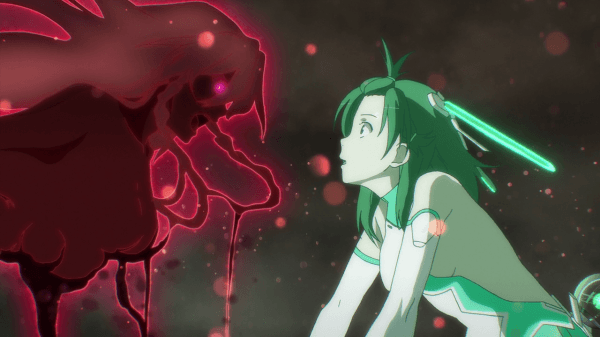 Instead of focusing on these three girls and their growing bond, the focus this time around is on a much larger scale as the leader of La Garite, Lan’s older brother Dizelmine, and the leader of De Metrio, Muginami’s “older brother,” Villagulio have continued to go after one another thanks to the fact that the planets that these two nations reside on are currently on a collision course that will destroy both planets. As such, with Dizelmine seeking a way to potentially destroy Villagulio’s planet with the power of the Vox Aura, and Villagulio doing what he can to prevent it, it is up to the forces of Earth and these three girls to try and act as mediators to this intergalactic war between two old friends.

As you may surmise, while the three girls are still the key players in the second season as they are always directly involved with the events taking place and the outcome is dependent on their actions. There are a number of secrets revealed and events taking place behind these girls’ backs to set a plan in motion devised by someone many viewers probably never would have imagined, despite a few very minor glimpses of his true character in the first season. Of course whenever the focus isn’t plot oriented, viewers still follow Madoka, Lan, and Muginami as they take part in various Jersey Club activities and continue to bond. 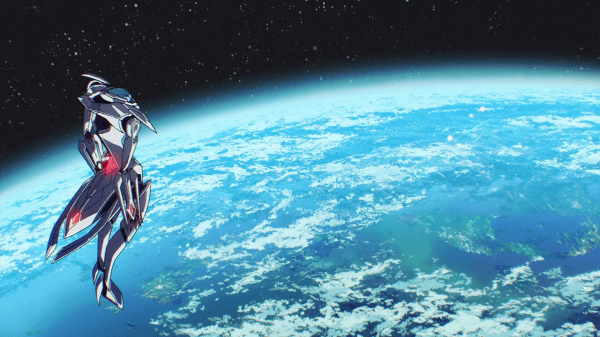 Almost every question the viewer has had since the first season is answered this time around as we learn the secrets about the events that took place 20,000 years ago during the first disaster that brought about the legend of the Vox and much more. With a certain character’s plans set in motion and the world about to be on the brink of disaster, even though the reason this character wanted to bring about such disaster should have been fleshed out in some way, Lagrange: The Flower of Rin-ne finds a satisfying ending that not only binds the trio of girls together but wraps up rather nicely.

Visuals
While I was able to see the first season on DVD, Lagrange: The Flower of Rin-ne Season Two is quite a treat to catch on Blu-ray. Thanks to the color coordination for the trio of girls, the show is vibrant with attractive character designs and detailed backgrounds. There also appears to have been more budget this time around as the character animation and mid-range shots retain their detail better than before. 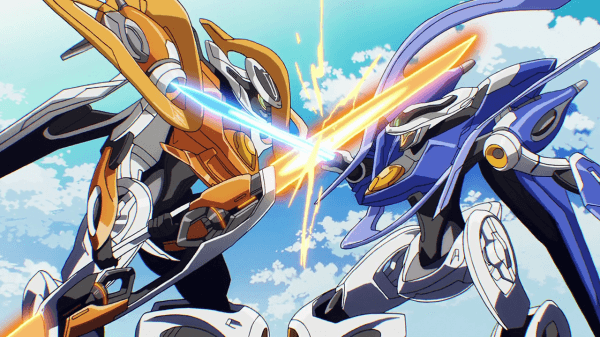 The Vox are used a fair amount this season, mostly towards the end, and their designs are just as good looking in this second season. There is some very mild fanservice in this second season, but it remains very harmless and the yuri undertones, outside of some teasing by Astelia, are also diminished as the three girls come off as inseparable friends with only a slight hint of something beyond that.

Audio
This being the second season of Lagrange, I found myself enjoying the voice acting much more this time around. You see, while I didn’t enjoy Karen Strassman’s Muginami, she really seemed to fit the role in this second season and the rest of the cast feels just as accustomed to their roles as they did the first time through. Of course for those that choose this option, the original Japanese dub is still available for viewers to listen to. 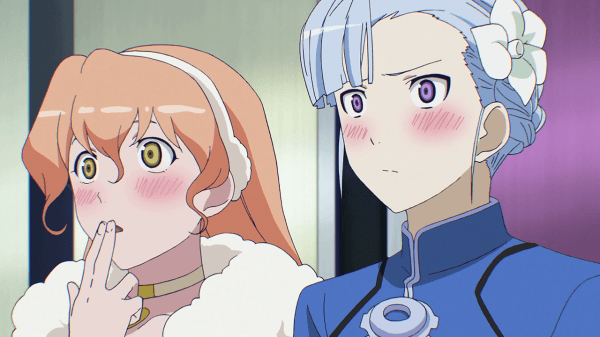 The soundtrack for Lagrange remains as impressive as the first season with a number of memorable pieces of background music along with a handful of forgettable ones. The opening theme, “Marble” by Megumi Nakajima, the Japanese voice actress for a side-character, is not only set to some stylized animation but is also an enjoyable listen, and the ending theme is split into three variations with a secondary ending used for dramatic episodes. The main ending theme is “Jersey-Bu Tamashi” which is sung by the main female cast with each of the Japanese voice actresses for Madoka, Lan, and Munigami taking turns, while the more dramatic ending theme is “Wasurenai yo.” also by Megumi Nakajima.

Extras
With the release of Lagrange: The Flower of Rin-ne Season Two viewers are treated to a number of on-disc extras that are mostly your standard fare. There are Japanese promotional videos, commercials, and trailers, trailers for other shows from Viz, and a clean version of the opening song and a clean version of every ending theme, there being three variations for each girl, and the secondary ending theme. 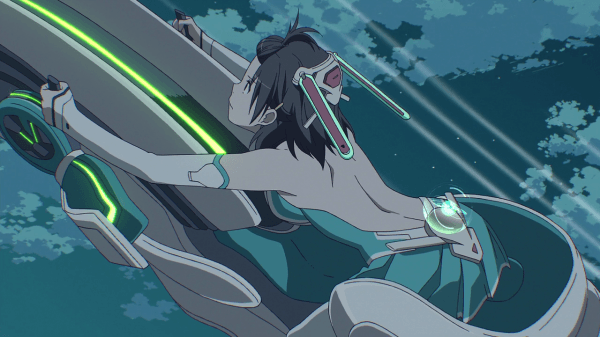 Finally there are the Kamogawa Drama shorts, comedic snippets from the lives of the cast outside of the main plot, which are presented with Japanese dub only and these shorts are roughly sixteen minutes in length combined.

Overall
Lagrange: The Flower of Rin-ne Season Two takes almost every question that viewers were left with at the end of the first season and answers them in an interesting fashion that sees the girls take more of a backseat to the main storyline as they tend to react to events rather than anything else. This isn’t that much of an issue however as the fast pace of the series and the way that the girls are never too far from the focus of the story keeps Lagrange just as enjoyable as the first season only now with more story focus, even if it does lack the abridging OVA.