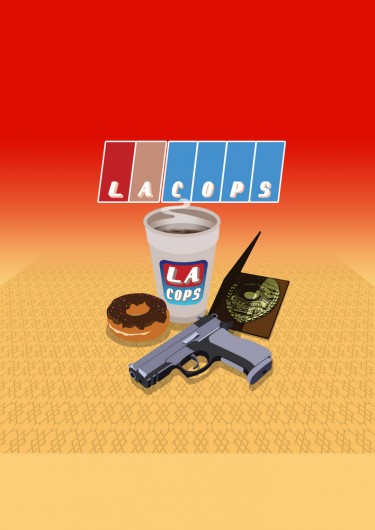 LA Cops is a top down shooter that is inspired by classic cop shows from the 1970s. Older TV viewers who have fond memories of the original Hawaii Five-O, Starsky & Hutch, and CHiPS will get a dose of nostalgia with LA Cops. The stylish game pits two police officers against criminal mastermind Hawaiin Mo and his thugs. 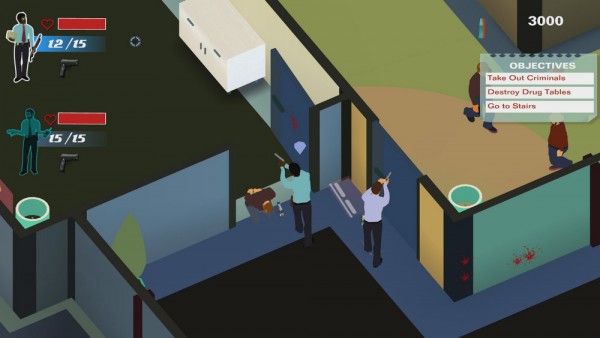 LA Cops lives up to its promise of the 1970s. The writing nails every major cop show tropes you would expect from a 1970s era show. Unfortunately, the plot itself is pretty shallow and forgettable, as it feels more like a bunch of tropes strung together to create a vague story. There are some extra missions in the game, but players are not treated to the same short cinematic that provides some plot between the action.

LA Cops gives players two police officers and a map full of trigger happy enemies. Death comes quick, as the player can die with a single good shot from an enemy. There are six available characters with different starting stats. Globally earned experience points can be spent to improve a specific character’s stats or armoury. The tutorial is pretty simple, preferring the player to figure out some mechanics and develop tactics on their own. 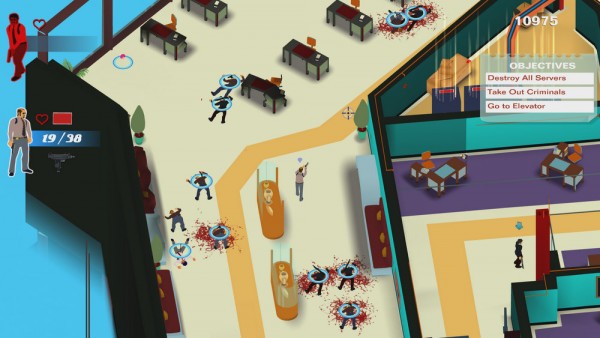 The game’s experience system needs to be better explained. The game does not properly convey that experience point is stored globally. It took a few levels to figure out that the reason why my lesser used partner was not gaining experience wasn’t that they kept dying, but rather I was accidentally spending all the points on my active shooter, thinking the same number of points was tied to my other character. Additionally, there is no way to add experience points to characters between levels. Players need to return to the main menu to distribute points then choose a new map. I would have appreciated the ability to simply assign points between missions without having to go back to the main menu. 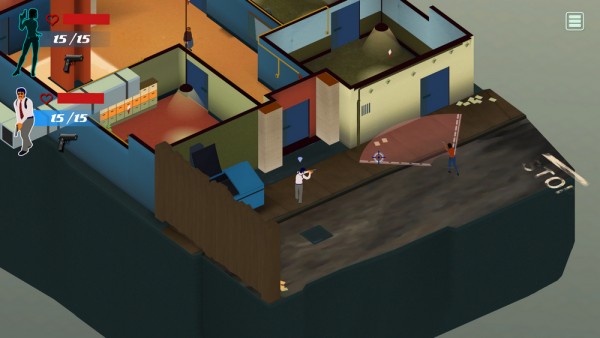 There are three levels of difficulty in the game. The two earlier levels allow for players to quickly lock onto enemies at various ranges, while the most difficult level will require the player to do all the aiming for themselves. The game is extremely challenging for a variety of reasons, some of them good, some of them bad. LA Cops is looking to mix tactical combat with fast paced action. A well-placed shot can take out a player character with one hit, which is a great source of challenge, as it forces players to think carefully about their approach. The game feels balanced towards using both characters for maximum effect, which further drives the tactical aspect of the game. Unfortunately, the tactical aspects of the game is hampered by the awful AI.

I found the enemy AI to be extremely unpredictable. Their line of sight and the hearing zones to vary wildly with little rhyme or reason at times. Bursting in a room and shooting all the henchmen could possibly bring half a map’s worth of enemies swarming onto the position while other times, absolutely nothing happened. 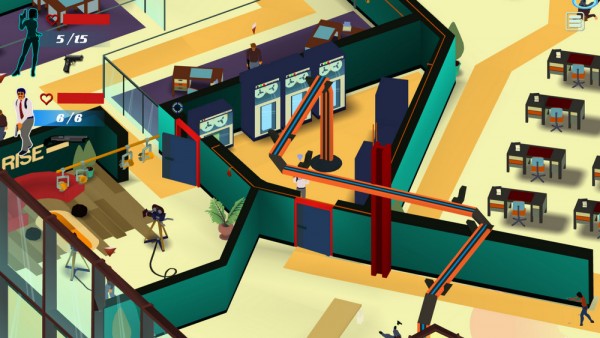 The partner AI is equally unpredictable and impressively stupid. Compared to the enemy AI’s almost instantaneous move and shoot behaviour, the partner AI prefers to move, stop to think, before firing their weapon in a vast majority of the time. Calling a partner to an area will cause the partner to move towards the direction of the area, but will they may not always turn in the direction of their movement. Instead, I counted multiple occasions where the AI preferred to shuffle backwards with his cone of fire pointed in the completely wrong direction. To ensure the partner would face the correct direction in preparation to burst through doors, I had to switch over to the partner and manually face them in the direction I wanted. This extra step really breaks the flow of the game. Avoiding collision with the player was not much better. If the AI stands in a doorway and the player tries to get through, the AI will simply stand in place without budging. Trying to get the AI to bust through a door with the player in a coordinated manner often ends up in a tangle of limbs and an anticlimactic death in a hail of bullets. The lousy partner AI just does not work with the game’s emphasis on tactical movement and makes the game’s controls feel about as manoeuvrable as a brick with wings. 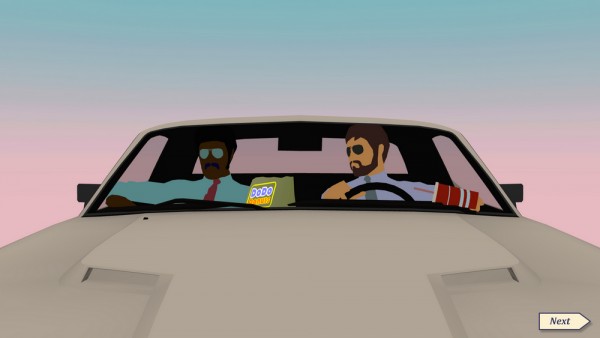 The weapon balance could use some adjustment. It quickly became obvious that the assault rifle is wildly overpowered. It is the go to weapon for the game. I found the pistol to be rather well balanced, encouraging accurate shooting for high rewards. The SMG felt a little lack lustre beside the assault rifle, while the shotgun did its job. The real disappointment was the most expensive weapon of the game, the grenade launcher. The fast paced twitchy nature of LA Cops does not lend well to the slight delay in firing and the slow moving projectile. It may be a great opener for those who can aim it well, but it quickly becomes too much of a detriment for any firefight that may follow.

Currently, the game has eight story missions of increasing length and five side missions. They can all be replayed in three difficulty modes and leaderboards are available for extra replayability. It only takes a few hours to get through the story missions, even accounting for many level restarts. 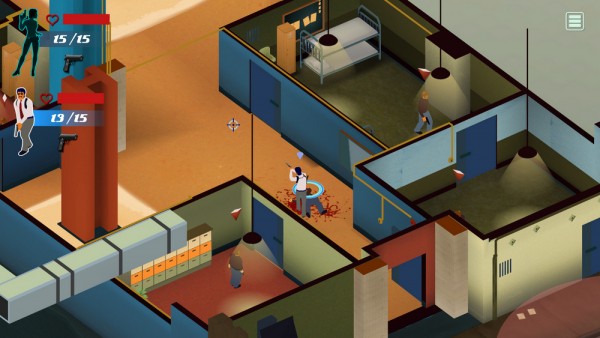 LA Cops has a great art style that is bold and memorable. Almost all of the details in the cut scenes have been removed in favour of a flat effect that is almost silhouette-like. The in-game graphics mixes a more detailed style with the flatter character style. The colours are the shades commonly associated with 1970s pop culture, giving it a great feel.

LA Cops hits the 70s cop show vibe spot on. The excellent rock soundtrack fits the era and the sunny Los Angeles setting perfectly. I wish there was a little more of it, as the riffs get noticeably repetitive as missions are restarted ad nauseum. The voice acting is B-movie grade, but since the game’s plot revolves so heavily around 70s cop show tropes, the cheesy voice acting actually works in LA Cops’ favour. The sound effects are solid, but the very few lines each character will utter in game quickly gets stale. I noticed that the only sound options provided are on/off switches, which is definitely inferior to a proper volume slider. 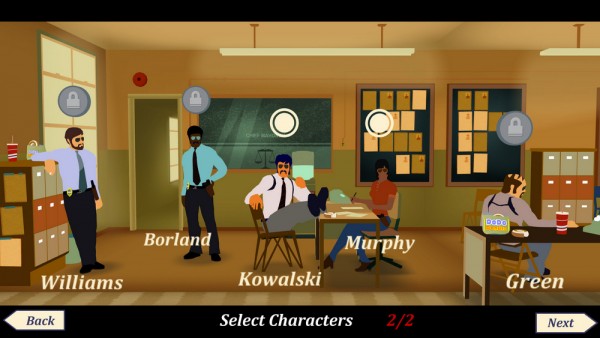 LA Cops is a hard game to recommend to anyone but the most hard core top down shooter enthusiast. The great audio and visual style of the game simply cannot compensate for the erratic and stupid AI. There is no feeling of accomplishment or progression with LA Cops, just the feeling of growing frustration and disappointment.