Kung Fu Rabbit is a fun little platformer from BulkyPix, makers of Jazz (read our review of it here), and it shows. The art style and controls are very similar to those of Jazz, and to the game’s credit. 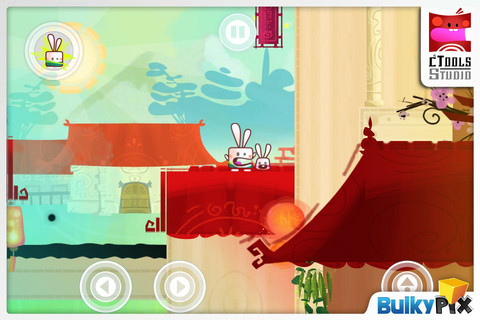 Some bad blob thingies have captured a load of little bunnies, and you’re on a mission to save them. Oh, and there’s some ufos involved. Or soemthing. The story is told through a few static comic panels at the start of each “world”. And while they look pretty, in BulkyPix’s cartoony style, it’s hard to figure out what’s actually happening in them.

But whatever. It’s a platformer. How does it platform?

It platforms pretty well. You’ve got left and right arrows on the bottom-left of the screen, allowing you to move the Kung Fu Rabbit left and right. These buttons kinda follow you around somewhat, letting you forget about where they actually are, and concentrate on controlling your character, a nice little tweak to the usual virtual buttons. You can also touch above the buttons, reaching all the way to the top of the screen, making it infinitely easier to find the controls. The character controls fairly well, although there are some odd moments when, if you’re standing anywhere near the edge of a platform, the game might just decide that you’re going to fall off.

There’s also jump button on the bottom-right with similar properties. You can slide down walls by falling near them and pushing the relevant direction button to lean into the wall. You can use this to jump away from the wall, and so bounce up parallel walls to reach higher areas, or just to slow your descent for a tricky jump you need to pull off. For some reason you can also keep leaning into the wall and jump to slowly crawl your way up, which feels a bit odd at times. Like you’re cheating or something. 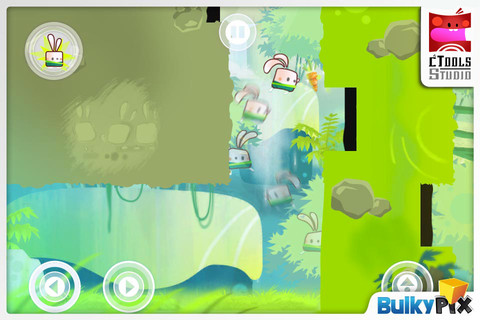 There are 3 carrots and one golden carrot to find in each level, which are then used to buy consumable power-ups from the armory at any time from the pause menu. One such power-up is basically a “continue”. You can place it down at any time, using the button in the top-left of the screen, and are essential if you are to make it through some of the tougher levels without pulling your hair out. But it kinda feels like the game is cheating you out of your hard-earned carrots. Other games just have continues; buying them feels like you’re being ripped off.

Other power-ups, such as “Power Aura” and “Death Ray” help you handle the enemies wandering around each level, clearing the level of bad guys, and such. But these are kind of expensive, and only work until you inevitably die due to some slip up, or the game deciding you slipped up. So all-in-all, youll probably end up just buying a ton of “Soul of the Rabbit” power-ups (the continues), and giving up on the others.

Each level is carefully layed out, with goo stuck to walls, and an array of enemies peppered liberally throughout. The enemies can be taken care of by touching the lit blue areas on particular parts of their bodies. Hit any other part, though, and instant-death for you. The wall gunk, similarly, means instant death. And with some of the levels being quite long, you’ll definitely be reaching for the continues, or suffering the start-from-the-beginning consequences. 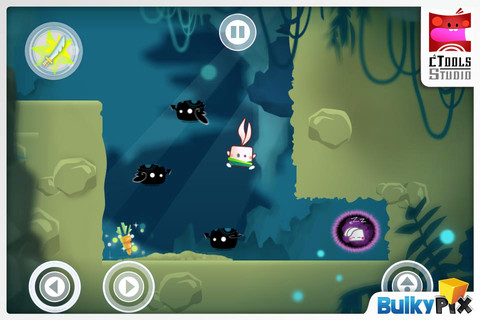 Remember I said it platforms “pretty well”? Yeah. Pretty well. The controls work… until the game decides to throw a wobbly. And the levels are well made, though without a built-in checkpoint system, it feels like they are way too long. And the majority of the power-ups are kinda useless.

So… the gameplay is okay, but there’s a few annoyances and bugs that keep it from really shining.

The art direction in this game is nicely done. It has a simple, cartoony, oriental kinda feel to it; with a limited, though bright, pallette, that changes as you move onto the different worlds. The animations are also simple, but effective.

The music is pretty cool, fitting the oriental style of the game in general, as well as fitting the various world mileux. The sound effects are cutesy, also fitting the game’s stlye. The pitter-patter of rabbit feet is a great little soundbyte, keeping up the fun and cute atmosphere. 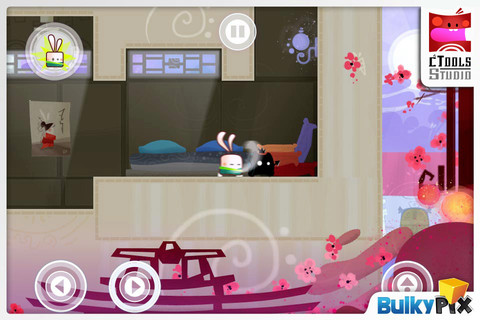 This game looks and sounds fine, the controls being easy to pick up, as opposed to getting in the way of actually controlling the Kung Fu Rabbit. But the few oddities that pop up in-game from time to time are really quite frustrating. And the power-ups are hardly worth using, apart from the continue item, which is so necessary to complete levels it’s strange they didn’t just have it included in the game.

That said, there is some fun to be had here.