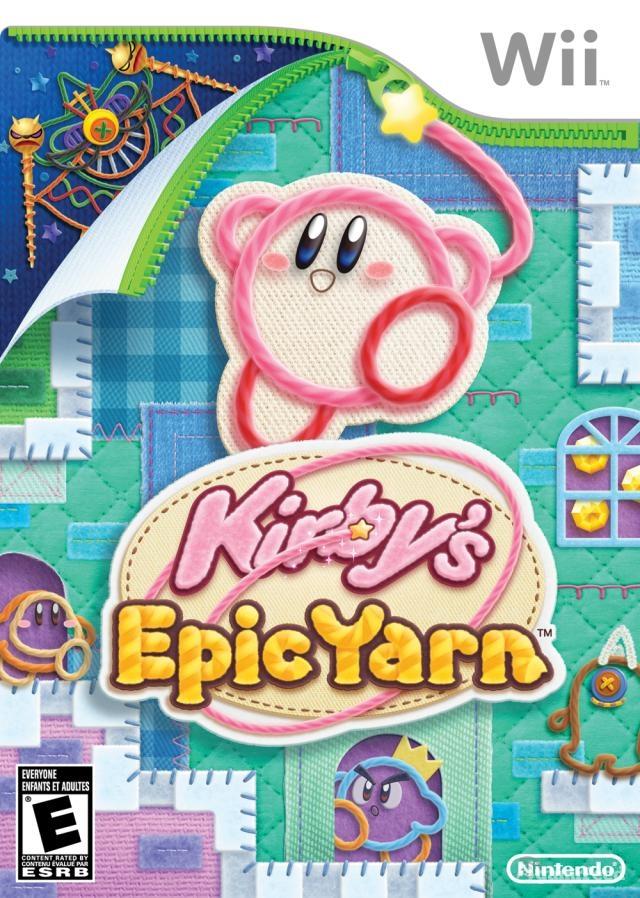 After receiving high praise at 2010’s E3, the heavily anticipated Kirby’s Epic Yarn is now out for the Nintendo Wii. Kirby is back and must help save Patch Land from the evil Yin-Yarn in this brand new adventure. Kirby himself is now fully threaded as he dives in the mysterious world made of fabric, assisted by his new friend Prince Fluff. The game is magical and I will explain every aspect below and try to make as few fabric or string puns as possible, so without further ado, here is my review for Kirby’s Epic Yarn. 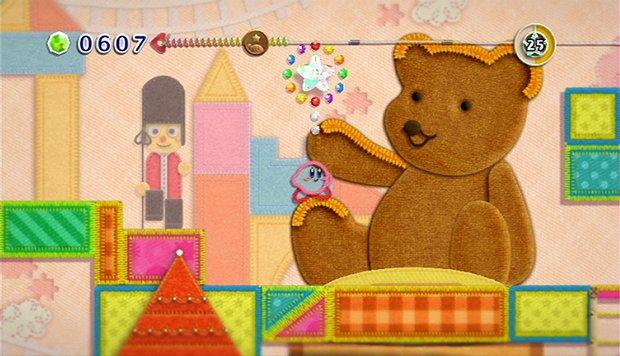 Story
Kirby is happily bouncing around in Dream Land when he encounters an odd tomato. Of course Kirby, being gaming’s favorite glutton chows down and soon angers the evil Yin-Yarn, who the tomato belonged to. Yin-Yarn sucks Kirby into his magical sock and straight into patch land, where the world is made of fabric and all of the creatures are made of string and yarn. Soon after, Kirby encounters Prince Fluff who is in quite a panic because Yin-Yarn has separated all of the patches that make up his world. Kirby decides to embark on a journey with the young prince to restore Patch Land piece by piece and stop Yin-Yarn once and for all.

As friendly as the story sounds, the narrator also does a great job of telling it. Every cutscene is told like a storybook with the narrator not only giving the main story, but voicing the expressions of the characters. The whole experience is relaxing and calm yet kept humorous by the witty dialogue and puns. Kirby fans will be in nostalgia heaven as many characters from the past make appearances throughout the game as enemies or quick cameos. Overall, the story fits extremely well with the whole friendly and colorful environment and has charm in every cutscene within the game. 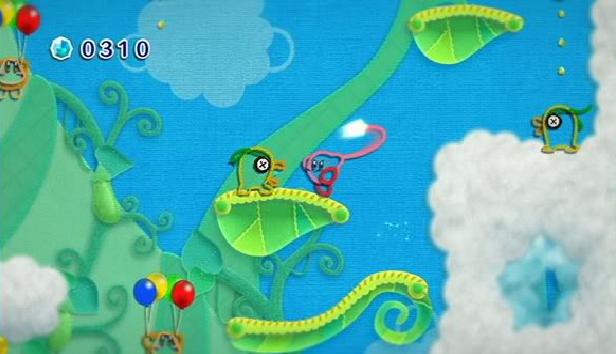 Gameplay
In most Kirby platformers, Kirby sucks up an enemy and either spits them out or absorbs their power. This time, since Kirby is a bit hollow, so most of the trademark moves are gone. This is nothing to distress over as now Kirby has a new arsenal using his yarn body. Controls in the title are done with just the Wii-mote keeping every action simple to perform. The first is Kirby’s whip. Kirby quickly extends his yarn-like arm out to attach to enemies and either pull them apart, or wrap them up into a ball which he can carry and throw at will. This also comes in handy with the environment as you can attach the yarn to buttons, zippers, and various other items to pull down platforms or open up new parts to the level. This is all one quick and is very effective.

The next power Kirby has is the parachute. When Kirby is falling, a simple tap of a button turns him into a parachute, letting you glide across to certain platforms or make a safe trip down below to the ground. There is also parts the game that let Kirby catch a breeze and drift into new areas of the level. Kirby’s other move is to turn into a car and quickly travel through areas by performing what was known as the run command. Every action is easy to do and a lot of fun to use while you are playing.

As you move through levels, you must keep an eye out for three treasures hidden throughout the fabric environments. There are also beads to collect which are very important as the ranking system on what you rank on each level, whether it be wood, bronze, silver or gold, rely on how many you pick up. That brings me to the next issue of gamplay, simplicity.

Players who are looking for a hardcore challenge are not going to enjoy the game in my opinion as the game was not made to be played to be beaten. You cannot die in the game at all, no HP gauge is present. When you get defeated, you simply lose all or some of your beads and move back to the point you were at before. The whole game is simple and on the easy side with the challenge increasing a bit throughout the game, but never really becoming overbearing in the hardness department. I never thought about the want of a challenge the whole time I was playing as the game was such an experience that it is clear that it is to be enjoyed rather than quickly beaten. 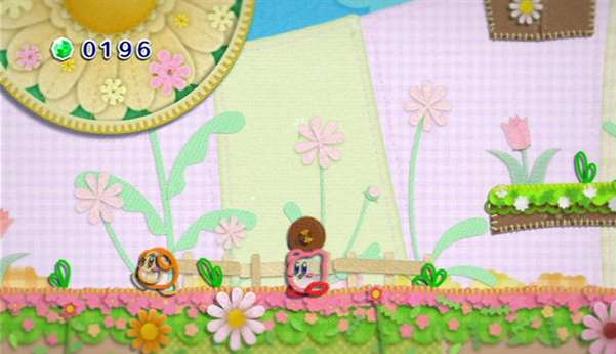 Each of the Patches, or Worlds so to speak, require you to beat them in old Kirby fashion, beating one level and moving to the next with a boss door opening up at the end. In all, I spent about 6 hours on the games overall story. Many levels switch it up with various powerups such as the returning “UFO” and the brand new Kirby Tank which change up the gameplay and are just as fun to play with as the standard platforming used mainly throughout the game. There are many other power-ups, but I won’t list them all for spoiler purposes as half the fun is discovering the new ways to play.

The bosses are a lot of fun to fight as well, each have their own method to be defeated and every boss battle plays somewhat different than the next. There is a lot to do after you complete the game aw well. The treasures you collect open up mini-games which can be played to earn beads and 100% the game as well as your very own apartment you can decorate with items by purchasing items from a store found on the overworld level using your beads as currency. There is also local co-op mode, which places the second player as Prince Fluff for the entire game. Prince Fluff plays exactly like Kirby and if you have ever played New Super Mario Bros., you are sure to enjoy this co-op mode as well as they are very similar.

Graphics/Audio
The graphics in Epic Yarn are amazing. The cloth environments are beaming with color and life in every level and detailed heavily to look like different pieces of fabric stitched together to make up the whole game. Interacting with these environments and peeling back layers is visually pleasing as well as it is done realistically and smooth every time making finding a button or stitch to unravel that more rewarding. Kirby can also travel underneath the fabric at certain points creating a indent in the cloth which looks just as sharp.

As far as Kirby and the other character’s appearances go, the transfer was done perfectly and the characters remain easily identifiable and retain the charm from past Kirby titles. Sometimes I caught myself stopping to admire the detail that went into the textures as everything is so unique and fitting it made each level a whole new experience with no dull moments. 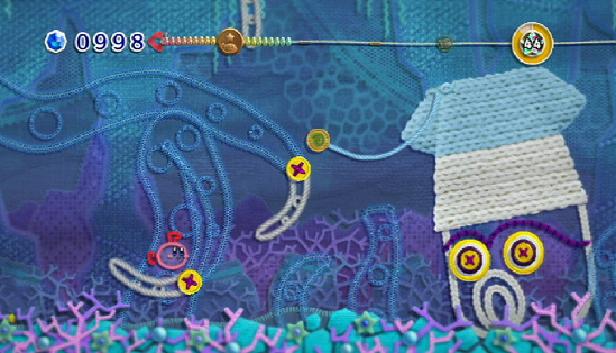 I have played a lot of Kirby titles before, and the music has always been well known and stands out above many series, at least for me anyway. With that said, Epic Yarn may have the best soundtrack to date. With many light instrumental melodies made up of piano and soft instruments, the soundtrack is stunning from beginning to end. Each level has it’s own melody which are memorable and perfectly fitting into the soft, colorful world. This is game where you would actually want to go out and own the soundtrack as from the first opening sequence up until the music played in the credits, the musical scores bring one masterpiece after another.

Now that the soundtrack is out of the way, the sound effects are also a large part of the game as well. Kirby sounds as cute and happy as ever which is to be expected. The narrator is just as important though since he is telling the story of the game. The soft tones used keep the game from taking any serious route and make it feel like this adventure’s story are being read from a book which fits well with the storybook presentation of course. From the squeak of a Waddle Dee, to the lightning strikes of Kracko, every enemy sounds great tying into the music and brings the whole vibrant world to life.

Overall
Being a huge fan of the Kirby series, Epic Yarn was really a very special title for me to review. The game is in my opinion an instant classic and gives a whole new life to our pink hero without destroying any of the charm from the older titles. The way the whole fabric and string-filled world is set up is very imaginative and innovative and stays fun to play all the way through. The soundtrack is amazing and even older tunes that fans remember can be heard in a whole new way as well as offering up newer melodies which are just as memorable as the classics.

As I said, this game is simple for most of the way through which is sure to be great for those new to gaming but with the new twist on platforming and just how fun and solid the whole experience is, Epic Yarn is sure to bring the hardcore in for a brand new yet familiar adventure with Kirby once again. This title will make you smile all the way through and is relaxing and a bit of fresh air compared to the much more serious titles on the market. With all of the extra content and mini-games to play as well achieving gold status on all stages, there is also plenty of reason to go back in for more. Kirby’s Epic Yarn is one of the best titles on the Nintendo Wii and a pure definition of a “system seller”, so to any gamer who just enjoys the “fun” aspect of a game, I highly recommend not only playing Kirby’s Epic Yarn, but experiencing the fun and imagination found in every stitch.

I Give Kirby’s Epic Yarn: