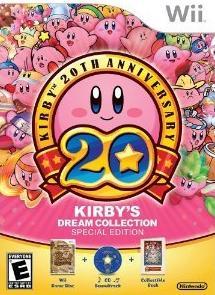 Overview
As a long-time Nintendo fan, no series holds a more special place for me than Kirby. The franchise as a whole is simple, light, and has always been about innovation and quality with every release that HAL have delivered during the past two decades. This year marks the 20th Anniversary of the series, and Nintendo want to celebrate their mascot who has mainly played third fiddle to the likes of Mario and Link over the years with one jam-packed compilation by the name of Kirby’s Dream Collection: Special Edition. Yes folks, this one is for the fans and encased in love, but is it enough? Do these 6 ports and bonus features warrant a purchase on a console that is on it’s last leg? Consider this the only answer you will need.

Gameplay
Ah, the games. As I mentioned, Kirby’s Dream Collection features six complete titles – which were chosen to represent the best traditional platforming experiences our pink fluffball has seen over the years. Each are raw ports of their original forms, with not one change made except for method of control. To make things convenient, Nintendo have included support for nearly every type of controller for the Wii, with support for the Classic, Gamecube, and WiiMote controllers for each title. The Game Boy titles in the package work well enough considering the jump to a television screen, and the more button-happy titles that hit classic Nintendo consoles are just as accessible, playing exactly the same as the Virtual Console versions. 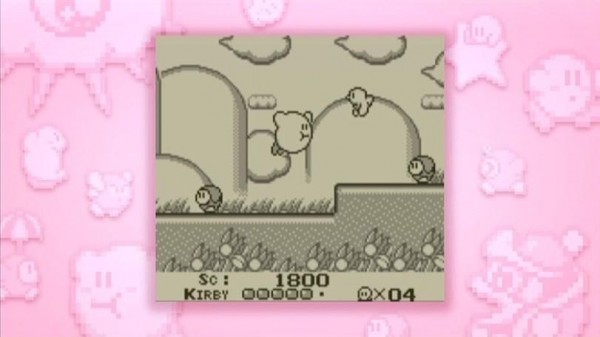 Kirby’s Dream Land is where it all started, and is the shortest romp on the disc with around an hour of playtime to be had for a first run-through. Now, the lack of ability stealing can be seen as a flaw, but everything still feels bubbly and still very Kirby throughout, so most should be able to forgive that minor shortcoming due to how solid this twenty year old game still feels. Kirby’s Adventure was actually the next title released and seen life back on the NES. Ability stealing made it’s debut within Adventure, and the soft colors keep the game looking timeless. Dream Land 2 brings us back to the Game Boy yet again, but this time with a bit of a gimmick at work in the form of animal buddies. Kirby can now hop onto (or into) Kine the Ocean Sunfish, Rick the Hamster, and Coo the Owl. It’s definitely the most superior of Kirby’s Game Boy outings, and one of the most underwritten titles in the franchise that in my opinion should be played first for those who missed out years ago.

Based on it’s more recent popularity on the DS and the mass amount of content within, the most fulfilling experience on this collection is without a doubt Kirby’s Super Star. A lot of people rank Super Star as one of the greatest games of all time, and for good reason. The hefty amount of Kirby hats, new partner system, and more refined visuals pull together one of the finest outings of the franchise, while introducing elements that can still be seen in the more recent entries. Is the DS version better? Yes, but that doesn’t mean that a good amount of entertainment can’t still be had. 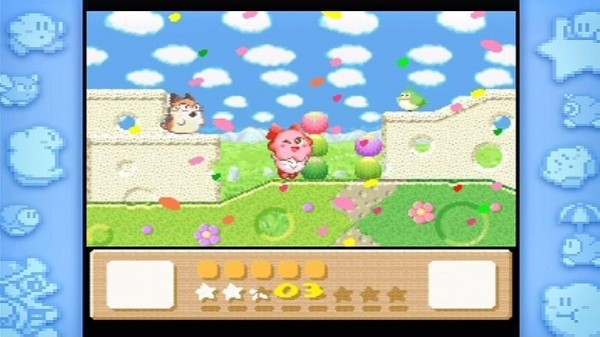 Dream Land 3 was another Super Nintendo release that acted as a curtain call for the console, and it is certainly a very unique Kirby platformer. You see, this title brings back the animal buddies, adds in some oddball partners, and introduces a pastel art style for one unique and memorable experience, through and through. The level progression system plays a bit like (the also similar) Yoshi’s Island, letting players go through a tile based map, instead of the usual star door stage entrances. A lot of these elements were carried over to Kirby 64: The Crystal Shards, which is just as charming, and in my opinion paved the way for what we now call the “2.5D platformer. Combining abilities is a lot of fun and brought a fresh burst of air to the line-up, and while it is a bit sluggish in comparison to the 2D platformers, it still remains strong in terms of charm and quality. 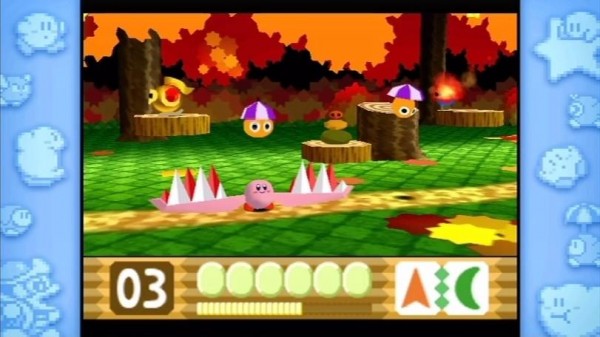 As you can tell, there are a lot of classics on display, and each are sure to be played over and over by new and old fans alike, as this franchise doesn’t show a lot of age when it comes to it’s gameplay. Yes, HAL Laboratory have made some more creative titles since Kirby 64, and the lack of the spin-offs does raise a few questions, but value wins when it comes to the six titles on display here due to how much one would typically spend trying to obtain all six original, or even digital versions of these games. I said there wasn’t a lot of wrinkles or grey hairs, but one must realize that each one of these titles, especially the Game Boy duo, have all had their formula perfected with remakes and ports since seeing a release, so jumping from one title to the next is something a lot of fans are sure to participate in until they find their favorite among the lot. If you do hit that home button to reset a game, the game automatically saves from where you left off though, letting you jump right back in at a later time.

Bonus Features
Last year when Kirby’s Return to Dreamland launched on the Wii, I fell in love with everything about it. The pure happiness gleaming out of every stage, solid gameplay, and return to traditional antics of the pink wonder made it one of the highest points of Kirby’s history, and Dream Collection includes a bonus mode with all of the above packed into new challenge stages to act as sweet icing on this layered birthday cake. At the start of each stage, the player is given one specific copy ability and must try to gather points by killing enemies in the most effective way possible. Magalor can also be raced in true Gormet Race fashion, which furthers the Challenge levels’ replay value even further. 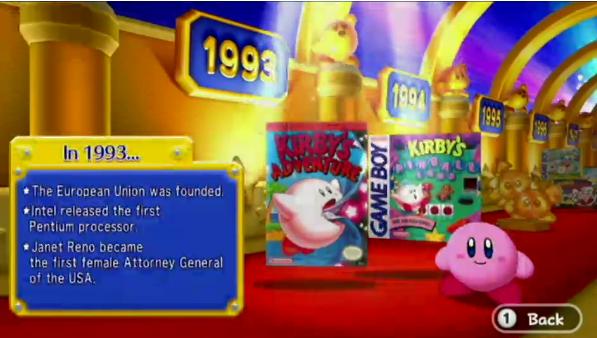 The next bonus honestly would be worth the full asking price alone, and that is the history timeline that tells the story of each Kirby release to date. Kirby can run along his own timeline where every release is shown off and fully selectable for a quick history lesson of sorts. Each game has random facts, such as the events of the release year, as well as a full video of the said title in action and viewable boxart. It may sound plain, but there was obviously a lot of work that went into creating this lesson of sorts, and fans are sure to eat up every second of it. During the timeline, three full episodes of the animated series “Kirby: Right Back at Ya!” can also be viewed, which isn’t all that bad, to be honest. For the “Special Edition” of the Dream Collection, a short but sweet paperback book was thrown in that has full color pictures of a lot of the art from most of the series, along with a wondrous soundtrack featuring 45 fantastic tunes that are candy for the ears.

Visuals and Audio
When it comes to the presentation for the menus within Dream Collection, expect a fully animated, red-carpeted delight for this party. Much like the whole series, this collection has Kirby’s charms stitched into the backdrops for games, which assist in recreating the experiences for today’s current displays. One of the biggest losses of the collection comes in the lack of HD however, as time has made our mascot’s hit titles appear dated by age through the brightness of the visuals. It’s not too damning by any means, but as I stated, memories of the more recent Kirby remakes are the main drawbacks of playing the raw releases. This franchise still has a timeless art design though, so most fans can easily overlook the lack of HD as even with the lower grade SNES, NES, Nintendo 64, and Game Boy graphics, there is still a lot of color and beauty for the eye to see within any game you so choose to play. 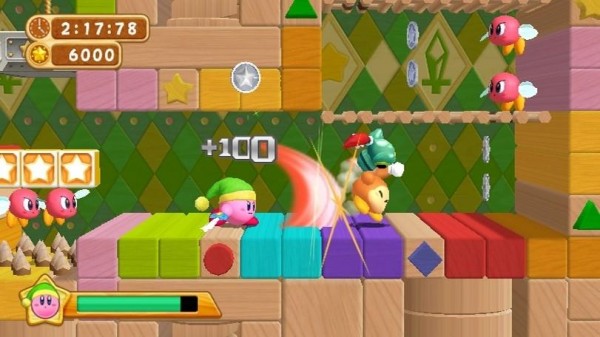 As far as the music goes, well..this category is a no brainer. I mean, there is a fully featured soundtrack bundled in the Special Edition for a reason, after all. Even after all this time, fans are sure to get giddy when roaming through Dream Land all over again, and Kirby’s little squeals of joy and poppy melodies are sure to bring a smile to any sad Waddle Dee’s face.

Overall
Nintendo are not really known for putting together compilations for their classic titles, which is probably due to the Virtual Console’s existence. That being said, this is one collection that any owner of a Wii must not pass up, as there is enough in Kirby’s Dream Collection to satisfy the appetite of the hardcore fanbase, or introduce a new player to the round chap that swallowed up our hearts 20 years ago. Sure, there could have been more, but for the price-tag, you can’t beat what is on our plates here, and much like every other Nintendo console, it seems Kirby has left another platform with an unforgettable entry. Happy Birthday, old friend, and here’s to many more.