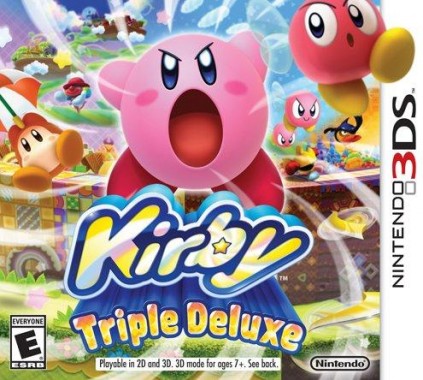 Overview
Out of all of Nintendo’s intellectual properties, Kirby is the one I hold near and dear. Sure, it wasn’t my first, and I don’t get addicted to the titles like I do to the likes of Pokemon, but no other mascot can take me to that special place that the pink fluff can. Fans like myself have been waiting for Kirby to land on the 3DS for a good while now, and without missing a beat, that star has fallen onto the platform in the form of Kirby: Triple Deluxe. Now with new modes, new abilities, and that same, easy-going gameplay, does this title mark a high point for the franchise, or is it wading in those safe waters that a lot of other franchises have took? Lets find out. 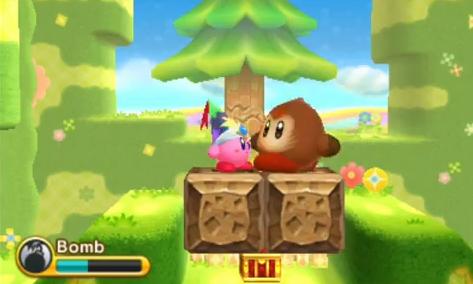 Story
I’ll be the first to say that Triple Deluxe does not have a deep, meaningful story, but what Kirby game does? This title, just like all other installments of the franchise carries itself with a carefree plot about a small, pink hero simply trying to save the day. This time, an evil force has kidnapped King Dedede, and Kirby must run up a beanstalk through a number of worlds in order to catch the foe and free the king. 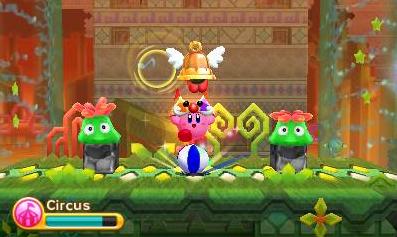 Yeah, Triple Deluxe does not go out of its way to tell you a tale for the ages, but why should it at this point? Kirby titles are all about speaking volumes with charm and imagination, and this one is no different as it effortlessly captures a delightful atmosphere. We see so many titles try to do this time and time again, some going out of their way to present some convoluted backstory just for you to like the main protagonist. Kirby simply puffs along and greets the player with a wave, jumping on a star where you can’t help but attach yourself to him and take off on a brand new adventure. Its a special achievement that very few titles in this industry can capture, but Kirby manages slam down that welcome mat and put a smile on your face within minutes, awaiting for you to come on board and just play.

Gameplay
Kirby titles – or the more traditional platformers for the brand, have always stuck to nearly the same formula since 1991, relying on smooth and easy-going gameplay to take the player throughout each level, with a great number of abilities to utilize for everything in-between. Triple Deluxe is the same in that aspect, as the controls are second nature to anyone playing just seconds after starting the game. If you have even touched one of this title’s predecessors (or even Smash), you know what to expect. Jump, puff up, float, inhale, exhale, run, and slide. Its that simplicity that gives Kirby his core, and makes the series so accessible to the masses. Sure, its easy, but that is the charm. Hal build the world and foes within around the formula, so the “new” experience comes with the content within. 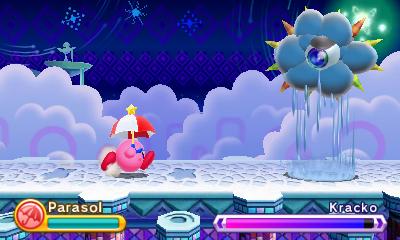 So lets talk about the content. The first new thing in the main game for fans to check out will be the brand new abilities. Along with the returning favorites such as cutter, wheel, whip, leaf, and so on, Kirby can now don the bell and circus hats. The bell ability allows Kirby to chuck bells at opponents from afar, or pull out a bell and beat the beats out of the unsuspecting foe. Circus is more of an acrobatic ability, giving the pink wonder the power the evade with quick reflexes, blow up deadly but humorous balloons, and juggle to nab enemies from below. Much like Return to Dreamland, there are not a lot of past or new abilities that are required to proceed, but this gives the player that element of freedom, where you simply move on with the power best suited to your own preference. Some might complain that this makes the game even more simple, but with the large array of abilities, the fun factor overwhelms that issue entirely – allowing you to make your way up the Dreamstalk to the beat of your own drum (or bell). 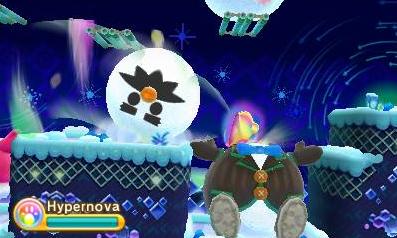 Another awesome addition that pops in quite often is the Hypernova ability. I would have categorized this with the other hats, but it happens to be a bit more special. When Kirby touches a magical plant, he instantly is granted the power to suck up every enemy in sight, along with parts of the stage and everything that isn’t bolted down to the ground. Sure, it sounds a bit gimmicky, but it works and is one of the most devastatingly charming techniques to appear in a Kirby game in years. The utilization of this power also makes it stand out, as players can move heavy pieces to solve environmental puzzles or deflect large attacks. For instance, one stage will have you pull a snowman’s head to its body, where it joyfully rewards you with stars once connected, while other moments will lead to Kirby pulling on lasers to melt ice from above, opening up a new pathway for the sake of progression. 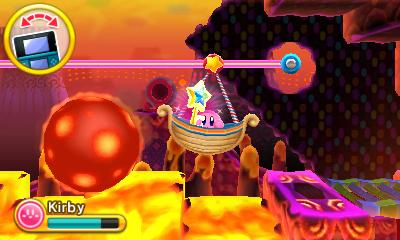 The stages themselves also add a great deal of freshness to the formula. If you have played any platformer in the past few years (namely Shantae), you may have noticed that a lot of developers have been toying around with the idea of going into the backdrop of the stage. Well, Triple Deluxe is layered and attempts this as well, and in my opinion executes it to a great degree. By jumping on a specific warp star, Kirby can ride into the background, where he can explore the stage in a whole new way and discover secret stars and items buried within the fauna of the stage. Starting out, I kind of thought that this would be a rare occurrence, but as it turns out, nearly every stage within the game uses this concept. Sometimes the player will have to take a cannon and clean house to clear a path in the background, before swapping sides and enjoying the safe travel zone they creates. Other moments will have you bouncing back and forth constantly. Its clever and chaotic, but also a blast to experience when bosses are tossed into the mix. 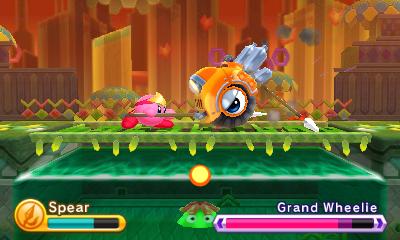 So you have all of these layers. The standard, fun platforming we got with Return to Dreamland. The new element that allows Kirby to jump in and out of the foreground. A Hypernova ability that allows Kirby to suck everything up in sight. Even a gyroscopic control scheme enters during moments of the game, but never comes off as intrusive as it has been in other titles for the same platform. You would think as “easy” as these titles are, that everything would be cake due to the amount of ideas working at once. Well, not entirely. Kirby Triple Deluxe earns its name by blending its ingredients into one savory entree, where the player is rewarded by…get this…PLAYING THE GAME! If you go in with the mindset of beating the game, you will be done in around three to five hours – tops. If you want to go in and collect every item, it could take you a great deal longer. There are a few stars amongst each stage, and some are hidden quite well. Keychains also litter the landscape, and have fun little homages to past titles with original art and sprites. It is a completionist’s paradise in many ways, and it only opens up more after beating the game once. 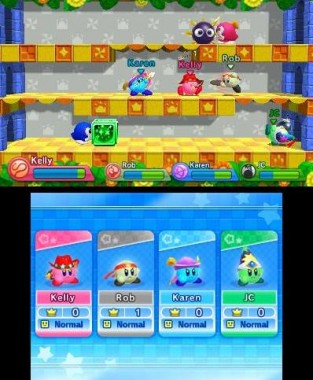 From the start however, players can grab some friends and play the new mode deemed Kirby Fighters, which is kind of like Super Smash Bros. meets your standard HP based brawler, but with only Kirby hats and abilities. The mode is ridiculously fun, but also teaches us that some hats will always top others. Its honestly really interesting just to think where this idea could go, as with a little more work- I could see this as its own product one day. Dedede’s Drum Dash is more of a rhythm based platformer where the big bird must land on drums to the beat to gain height and collect coins. Fun, but not nearly as engrossing as Kirby Fighters, I must say. Players also have a boss rush mode to compete in and have the option to play as Dedede in a speedrun of the main game, which by the way is fantastic. As I said, there are a good number of layers to this title, and the 3DS is thankfully a welcome home to Kirby and all of his tricks here.

Visuals
I never thought I would say this, but having exceptional graphics may be the only thing that slightly hurts Kirby on his 3DS debut. Much like a lot of the gameplay itself, Triple Deluxe looks a lot like Return to Dreamland, which came out on the Wii a couple of years ago. The colors are vivid and happy, the models and environments are smooth, and the textures all pop with the elements working together, but my big qualm comes that this title looks too much like that Wii title. That isn’t a bad thing, but when you are in an age where people are not buying the Wii U because it seems like a Wii or are skipping out on Mario because it has the same visual style of the last, it will probably make some think that like Donkey Kong Country Returns 3D, this is just a portable remake if they don’t have the gaming education to presume otherwise. Trust me, its a far cry from that game, but I could definitely see some confusion due to the visuals alone. 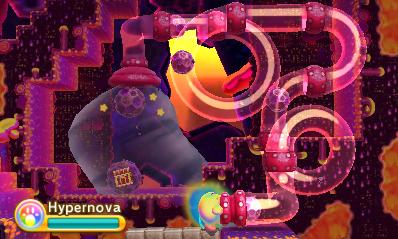 There are so many charming animations in the game however, that its hard not to let out the biggest grin imaginable while playing. For instance, one of the most memorable moments for myself were these two little Waddle Dee that were joyfully playing in the background. I just obtained the Hypernova, and noticed a straw-like pipe that connected the areas together. Without hesitation, I made Kirby inhale like crazy, and the Waddle Dee latched onto a rock, holding eachother’s hands until they met their quick demise just seconds later. Its that attention to detail that gives this title its heart, and gave me some memories that simply bring joy in retrospective. 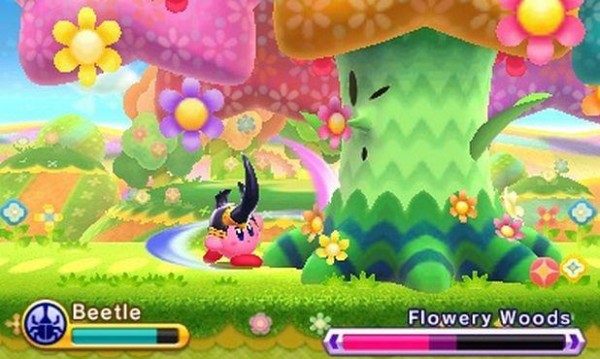 Audio
The audio is also wonderful, with a lot of the same tracks from past games, along with new and remixed tunes to present this title as a new experience. Quiet, melodic beats give icy areas a peaceful atmosphere, while fast, chaotic tunes are sure to keep you on edge while going against a giant boss. Kirby also still has his lovely little voice and the effects are all pure quality, so its another great thing to see that the audio was handled with care for this portable entry. 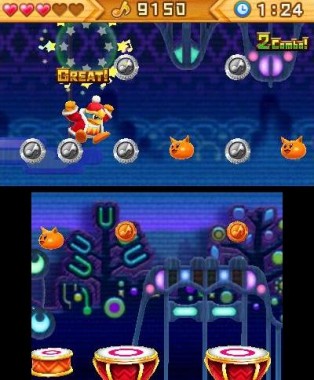 Overall
Kirby Triple Deluxe is an exceptional portable platformer. I am sure other critics would choose to disagree due to the low difficulty, but why can’t a game just be a game for once? Over the past few years, indie platformers have been in heavy rotation, tying together archaic gimmickry to make a new product, only to be wrongfully labeled innovative as a result. This title doesn’t want to change the world, it just wants you as the player to have fun. What is the best part of Kirby titles? The abilities, of course. So when you increase the inhale by 100x and create a never-ending smorgasbord for the player to take advantage of for no reason other than that magical little “F” world, we as the player get everything we could want in what is a decently packed cartridge full of charm and care-free entertainment. Triple Deluxe is platforming perfected that leaves plenty of room for dessert, and a pretty great lesson for newer developers on how to reward your consumer by simply giving them what they paid for. 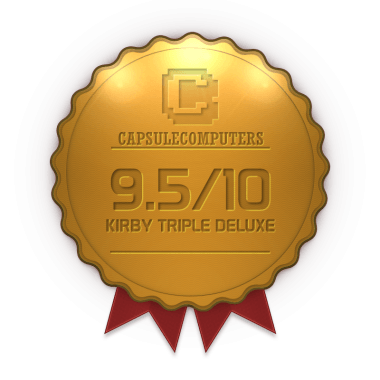