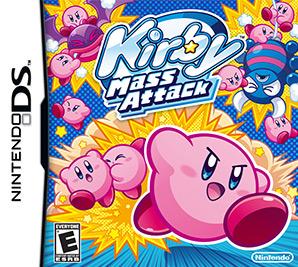 Out of all Nintendo’s mascots, none are as lovable as Kirby. This little pink fluff has now starred in more titles than both Link and Samus and has appeared on every single platform Nintendo have released in one form or another. One of the best aspects of the franchise as a whole though have been the many spin-offs that break from the traditional platforming fare and offer up new gameplay mechanics for players to embrace. Sticking to this trend, Kirby Mass Attack divides our cuddly protagonist into 10 and has players control the swarm in a platforming adventure by only using the Nintendo DS’ touch screen. So how does this title fare with 10x the cute? Here is my review for Kirby Mass Attack. 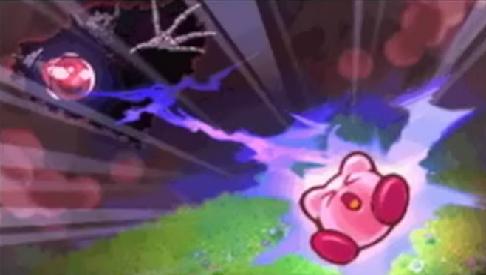 Story
The colorful plot of Mass Attack starts up with an evil wizard by the name of Necrodius invading the land of PopStar. Being the hero of the land that he is, Kirby is the number one target of the evil wizard as he alone is the only thing that stands in his way of pure domination. Necrodius strikes Kirby with a spell that divides him into 10, as ten weaker copies are much easier to defeat than one and quickly defeats the squad in just a short time. The world would have been doomed for sure, but thankfully one Kirby still remained and with the help of a little star, we see our hero set out to gather all of his copies and save PopStar yet again.

Yes, it’s a very simple plot, but Kirby’s ability to captivate the player remains present throughout the whole game and gives easy incentive to progress. It would take a very cold soul to not let a grin shine through while playing, as this squad of ten all possess that same innocence and charms that the series is known for. Even while my entire ensemble were attacking a poppy little creature by essentially beating him to death, I still found myself rooting for my team and just wanting to find the next fluffy creature to destroy in the same maniacal manner. That is the magic of Mass Attack though, as this narrative feels fresh to the series but yet still keeps that familiar atmosphere to let the player know that they are playing a Kirby game. 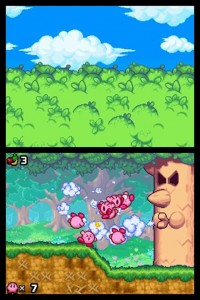 Hardcore fans of the Kirby universe will also be delighted to know that many familiar faces have returned in one form or another. This includes the likes of Whispy Woods, King Dedede, and even a certain member of the Squeak Squad that is ready to assist the player in finding secrets in the game’s world.

Gameplay
Aside from there being multiple protagonists at once, Mass Attack at first glance appears to fit right in with all of the other more traditional Kirby titles. This would be true, but players do not actually control any of this pack of pink’s movements manually. Instead of using the D-Pad or face buttons on the DS, players must control their squad by using the touchscreen. Dragging a star along the screen will infatuate the Kirbys and they will follow wherever your pen touches. Holding down the stylus will bunch all of your crew together and you can then draw a line to let them hover to a higher platform or out of danger. The whole touchscreen only scheme may scare some away at first, but after a short time it becomes second nature as this mechanic actually makes it easier to keep up with all of Kirbys at once. 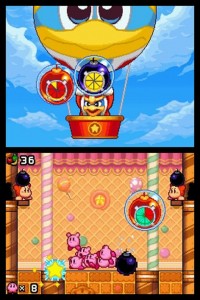 This concept for control goes a bit further with the enemies and environments within the game. By quickly flicking the stylus in any direction, the player can instantly toss a Kirby across the screen. If this is done at an enemies direction, your little pink puffball will latch on and pummel the foe until shaken off. To better the odds, you can flick multiple Kirbys at once and watch gleefully as they pound away in unison until victorious. Certain enemies can change up this combat system as well as some foes have defense mechanisms that can protect them from being latched on to. Yes, there is a fine layer of strategy in Mass Attack, and the game attempts to keep this combat system fresh by not introducing new techniques, but instead new hazards that the player must find a way around by using the mechanics provided.

This “pick and flick” method is also used to progress further in levels as well as your team can be fired like projectiles into walls, blocks, or barriers, which in turn smashes the obstacle and clears a new path. At times, vines will also be draping down where you can fling a Kirby onto and watch as he pulls fruits or other goodies out of the level itself. Whenever you collect fruit, a point meter at the top grows larger and once it reaches 100, a new Kirby will join the pack, which makes these tasty treats pivotal to eat. As you would expect, the more Kirbys you have, the more damage you will do to enemies or obstacles. Level progression is also affected by the number of Kirby you have, as later stages and even areas within levels cannot be accessed until you have a large enough group. 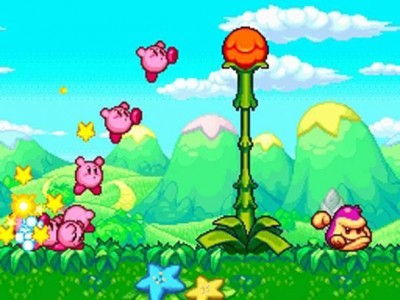 It really isn’t too tough to take out many enemies within the game, but keeping everyone in your pack happy and healthy can be an entirely different ballgame altogether. If one on your Kirbys are hit, they will instantly fly back and turn blue. If they are hit again, they will grow wings and slowly make their way up to that great big Dreamland in the sky. Luckily, death isn’t permanent and you can actually flick a member of your squad at a spirit to revive a fallen ally. Some environmental obstacles though can literally crush your entire team at once unless dodged correctly, which can lead to feelings of sheer panic as you frantically try to use the remaining Kirbys to drag these angelic puffs back to earth. This also brings up the only flaw in the game that I found, which lies in camera itself. I had one moment where I was on a moving platform and my team was scattered about with some of the members located off-screen. Before I could even try to gather them up, the stage squeezed the life out of them and they floated off while I remained helpless. I can say these moments were a little bit frustrating, but they don’t occur enough to put a damper on the overall experience. 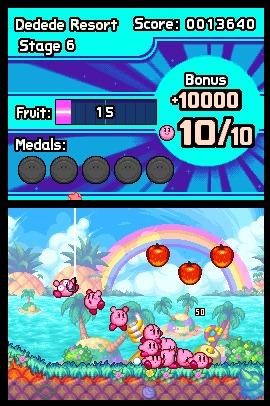 The finest feature of Kirby Mass Attack is the amount of level variation within. There are five differently themed worlds that the player will have to traverse altogether, with a set number of levels in found in each one. Now the main objective of for every stage is simply to make it to the next door and continue through until the exit is found. To keep things fresh along the way, the player is treated to utilizing different mechanics to progress through. For instance, one level has your squad ride a giant turtle while cracking away at his shell to reach a door in the center while others can put have your pack cruise up an elevator while dodging incoming hazards. I could go on, but nearly every stage provides something new so it would be a like completing an essay to make mention of it all. Boss battles are also very present, and add in some of those familiar faces into the game that usually require a bit of thought and strategy to conquer.

Each stage also possesses one of the greatest rewards you can earn, with that being gold medals. Why are these so great? Medals collected will unlock mini-games that can be played through an extra menu. Some of these include a Whack-a-mole type game where the player must tap enemies that pop out of holes, a full blown top-down shootemup, and even a turn-based RPG themed romp. There are ten different mini-games in all, and finding enough medals to unlock the next can feel like Christmas Morning due to how well these games were crafted. This is also where the true challenge of Mass Attack comes in as well, as a lot of these gold medals are cleverly hidden and can require a lot of effort to actually find. To take it a step further, 35 achievements can also be unlocked by performing specific tasks. It’s pretty easy to fly through the entire game a few hours, but finding these medals and aiming for every achievement can lead to multiple playthroughs and allow players to revisit worlds several times over just to get that coveted 100% completed label.

Graphics/Audio
If I were to best compare the visuals in Mass Attack to any other Kirby title, it would probably be to that of what we seen in Squeak Squad as the 2D art style resembles the past title greatly (and should definitely be taken as a compliment). Each world delivers eye candy with bright and colorful environments that all feature detailed and stunning backdrops for players to gawk at. Your pack of Kirbys are also a joy to watch, as their bubbly and energetic animations keep the game light-hearted and perfectly compliment the game’s upbeat atmosphere. I was also pleased to see that character models were also given extra love this time around, with each bearing faces that are full of expression and life. 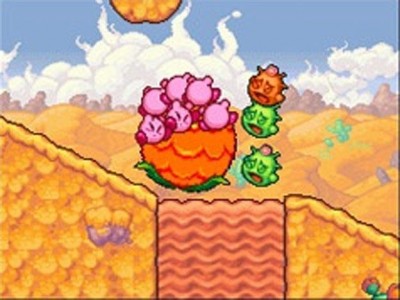 As with nearly every title the franchise, the soundtrack here is just as phenomenal as one would expect. Every tune in the game captures the essence of each stage perfectly. Some of the music within will instantly be familiar to followers of the series as it’s ripped straight out of older titles such as Kirby 64. As a testament to the greatness of these beats, the developers even took it a step further and put in a jukebox as a mini-game so you can re-listen to any melody at anytime. Kirby and his 9 other copies are also a noisy bunch themselves, but hearing their high pitched squeals, cheers, and even screams is now ten times more delightful and is sure to put a smile on your face as you progress through the lively world of PopStar.

Overall
Touchscreens these days may be considered “old technology”, but Kirby Mass Attack takes on this control scheme and executes a flawless performance during the entire journey. This type of gameplay may new to the series, but it still stays easily accessible through it’s simplicity and remains fun for the entire ride due to the heavy amount of variation tossed in. Content is also something given by the barrel in this title as well, as the mini-games and medal collection beg the player to revisit this colorful world many times over. With a fun little plot to follow and ten little Kirbys that are oozing with charm, Mass Attack is yet another fantastic spin-off from the franchise that made a name for it itself by taking risks and being successful while doing so.

I Give Kirby Mass Attack