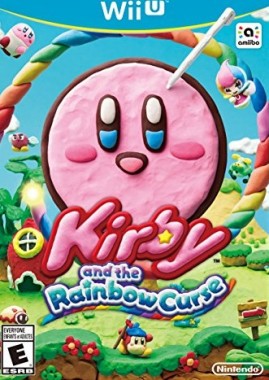 Overview
Kirby may have had a great number of releases, but Nintendo have waited a bit before having the lovable mascot debut on the Wii U. Maybe the reasoning behind that was due to the development of Smash, but its also because Kirby titles have to have nothing but quality before releasing – and while the platforming is great, HAL have always enjoyed putting our pink hero in new situations with gimmicks galore. After Return to Dreamland and Triple Deluxe brought us more foundation for the franchise, Kirby and the Rainbow Curse calls for something more unique. Utilizing the same mechanics as Kirby’s Canvas Curse and Yoshi’s Touch and Go, this release is out to please visually, with a bit of a sturdier challenge than before. How does it fare for the Wii U? Let’s find out.

Story
Kirby and the Rainbow Curse starts out like most Kirby titles, with our little hero innocently playing with Waddle Dee in the fields of Dream Land. Just a few moments later, the sky opens up and a new villain by the name of Claycia drains the world of its color, sucking the life out of every living thing in sight. That is where we meet Elline, a magical little paintbrush who falls into the world, restoring Kirby and Waddle Dee so they can put a stop to the menace once and for all. That is the little plot that awaits, and its quite charming. Sure, it doesn’t take any risks for the series or deliver much outside the norm, but Kirby fans will be pleased as the same atmosphere is completely in tact, inviting the players yet again on a memorable little adventure that is played in a brand new way of sorts. 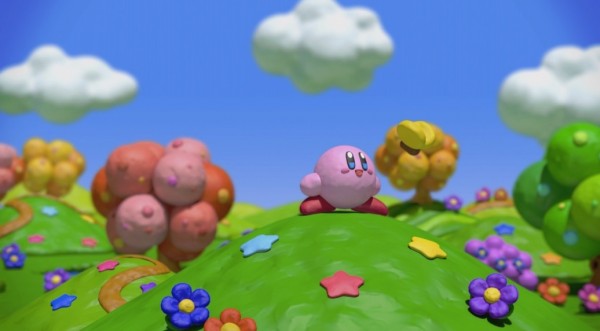 Gameplay
Rainbow Curse is very similar to Canvas Curse in many ways, but the two titles really shouldn’t be compared. Instead of copying abilities from enemies, Kirby has to smash into them at a certain speed, gaining momentum from your magical little stylus controlled paintbrush. Yes folks, you will be just using the Gamepad for this title, as everything you do is stylus controlled, with the gimmick being a rainbow colored rope that the player must create for a ball-shaped Kirby to roll on. Making ramps, loops, and allowing Kirby to gain speed is how stages are finished, with a great number of little puzzles to figure out throughout each stage. For instance, water may be pouring down to slow Kirby to a halt, but with your rope you can get the little guy moving and also paint another rope to block the waterfall entirely to keep everyone nice and dry. Another scenario you will see are spikes that can take out Kirby quickly unless you draw a path to keep him protected. Its a simple mechanic, but one that requires the player to pay attention to every piece of the stage so they get the most out of the playthrough. 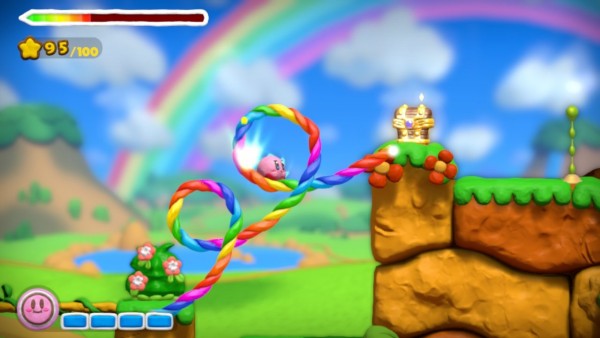 It isn’t all about rolling along your own thread though. While that works fluidly and the stylus is very responsive, the player also gets to take part in vehicular stages of sorts, with Kirby transforming into a Rocket, Tank, and Submarine. We saw these types of vehicles before in titles such as Epic Yarn, but with the gimmick on display, it does give a new way to enjoy them. Those wanting a little something extra will be happy to know that Kirby does obtain a power-up, allowing him to grow and shoot at a very fast speed, destroying anything in his path for a short amount of time. It only costs 100 stars to perform this tactic, which gives players a better reason to collect every star they see throughout each stage as the maneuver is very useful as a good number of secrets and collectibles can be found using the extra power. 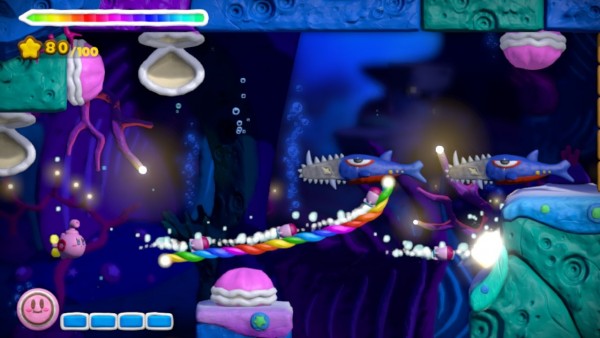 Exploration is something that is rewarded, and those who take the time to toy with their surroundings will find a prize in every corner. Collectibles such as figurines can be found in treasure chests, which are hidden well in every stage. Sure, this is a Kirby title and it is not going to be a sturdy challenge, but when you set out to obtain everything such as stars and chests in a particular area, the difficulty does go up greatly as there are plenty of items that are placed in dangerous areas. Boss battles end each area well enough and are done in a great way. For instance, a standard bout with Whispy Woods is not exactly what the player will find as new obstacles make themselves very present to make for a more unique take on something we have experienced in just about every Kirby game to date. I still don’t know how that stupid tree gets himself on the opposing side of Kirby every time, but its a quirk that assists in providing familiarity to an already blissful experience. 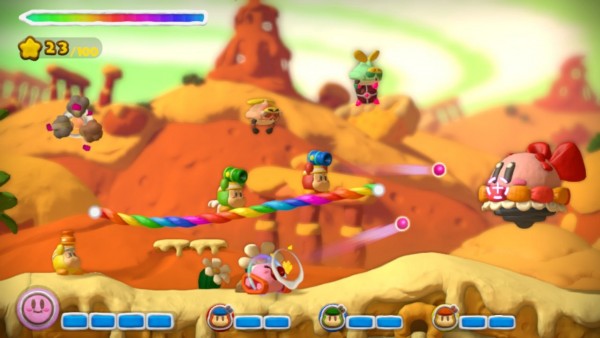 Those who want a bit of extra meat can look towards the multiplayer, where local players can assist through Wiimote control, taking the roles of Waddle Dees. The Dees don’t do alot other than pick up Kirby and attack enemies, but it is a fun little extra. Challenge mode brings a lot of content with it, as these short stages allow players to collect medals by quickly creating a rope to solve an environmental puzzle. I’ll be honest, a good number of these are tough – which makes me wonder why HAL didn’t add that difficulty to the story mode. With that said, hardcore fans wanting to test themselves will find a lot to do after beating the main game through this mode. Amiibo support is rather minimal as it just gives Kirby power-ups, but that is just fine as the little bonuses act as a way to make the game easier and allow for more interesting second visits to each stage.

Visuals
The clay aesthetic bodes well in Kirby and the Rainbow Curse, giving us a world full of color. Cutscenes appear to use stop-motion animation, with doors stretching out frame by frame to lay out the next area and Kirby literally making a splat when falling from a long jump. Its different, but quite endearing. Personally, I never was a fan of clay in the art world, but it works with Kirby’s universe, giving this particular release a gimmick to call its own. Every bit of this world really is made of clay and while the mechanics never bring that into the mix really, the stages are definitely beautiful little art pieces from beginning to end. I guess I also should bring up that you are required to look at the “non-HD” Gamepad for this adventure, but honestly, this title is made for the Gamepad. Sure, you can look up and see it in a better format, but the mechanics are more important than the visuals here, and you can enjoy them all the same on the smaller screen. 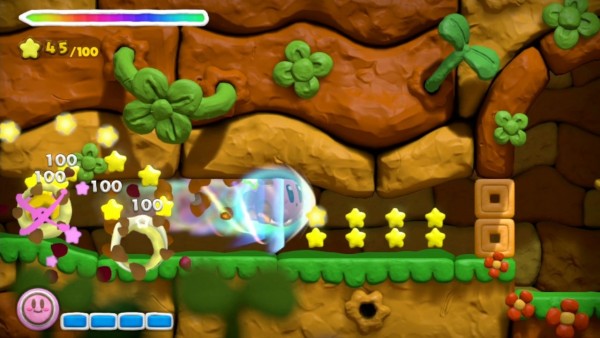 Audio
The soundtrack for Kirby and the Rainbow Curse is very pleasant. I wouldn’t say it was the best set of music for Kirby ever as most seems to be tracks that have been remixed to better fit in this world, but fans will enjoy what they hear and be whistling to the tunes in no time. The sound effects are also well crafted, with Kirby’s little yells and environmental noises bringing Dream Land full circle. Its all about the same as before, but again, the gameplay is so much of the forefront of this title that the rest, while great – simply paints a more complete picture of a world much traveled.

Overall
Kirby and the Rainbow Curse is a fine debut for the pink mascot on the Wii U. While it doesn’t provide an entirely original experience, it still is refreshing and a joy to play. Nintendo seem to use Kirby to test the waters for other titles, and with this being the first real touch-screen only adventure for the platform, I must say that what we have here is an effort that paves the way for the merging of the handheld and console market for Nintendo. Rainbow Curse is a charming and fulfilling game that slides right into that “hidden gem” category, giving yet another high mark for a franchise known for its consistency.