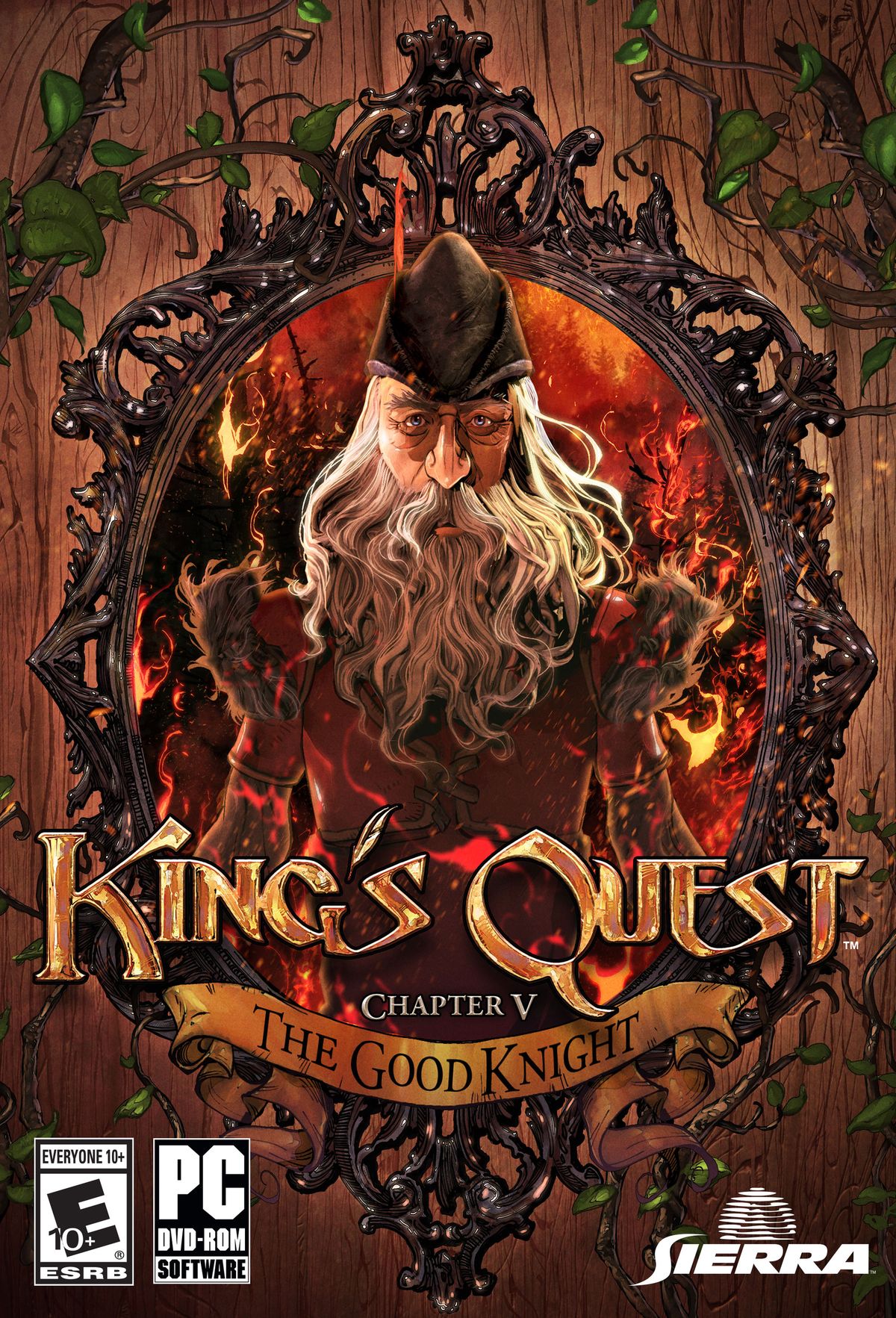 The King’s Quest reboot is finally wrapping up. “The Good Knight” serves as King Graham’s final adventure to cement his legacy and save Daventry one more. In this chapter, Graham and Manny’s rivalry will finally come to its stunning conclusion and we will discover who will inherit the throne of Daventry.

King Graham is fighting his body for one last grand adventure. Unable to leave the bed and his memory fading, Graham is insistent on trying to tell Gwendolyn about all the details he’s forgotten all these years while retelling the story of his latest adventure. It is clear Graham is obsessed with his legacy and is worried he will be forgotten as his predecessor King Edward was. As Graham’s final story kicks off, Manny interrupts Graham’s plan on an epic adventure. In a rather childish “if I can’t have it, then no one can” attack, Manny sets fire to Daventry and agrees to engage in one last battle of wits against Graham. Manny forces Graham to prove he is still quick and witty before the pair buckle down for one final deadly showdown of wits. 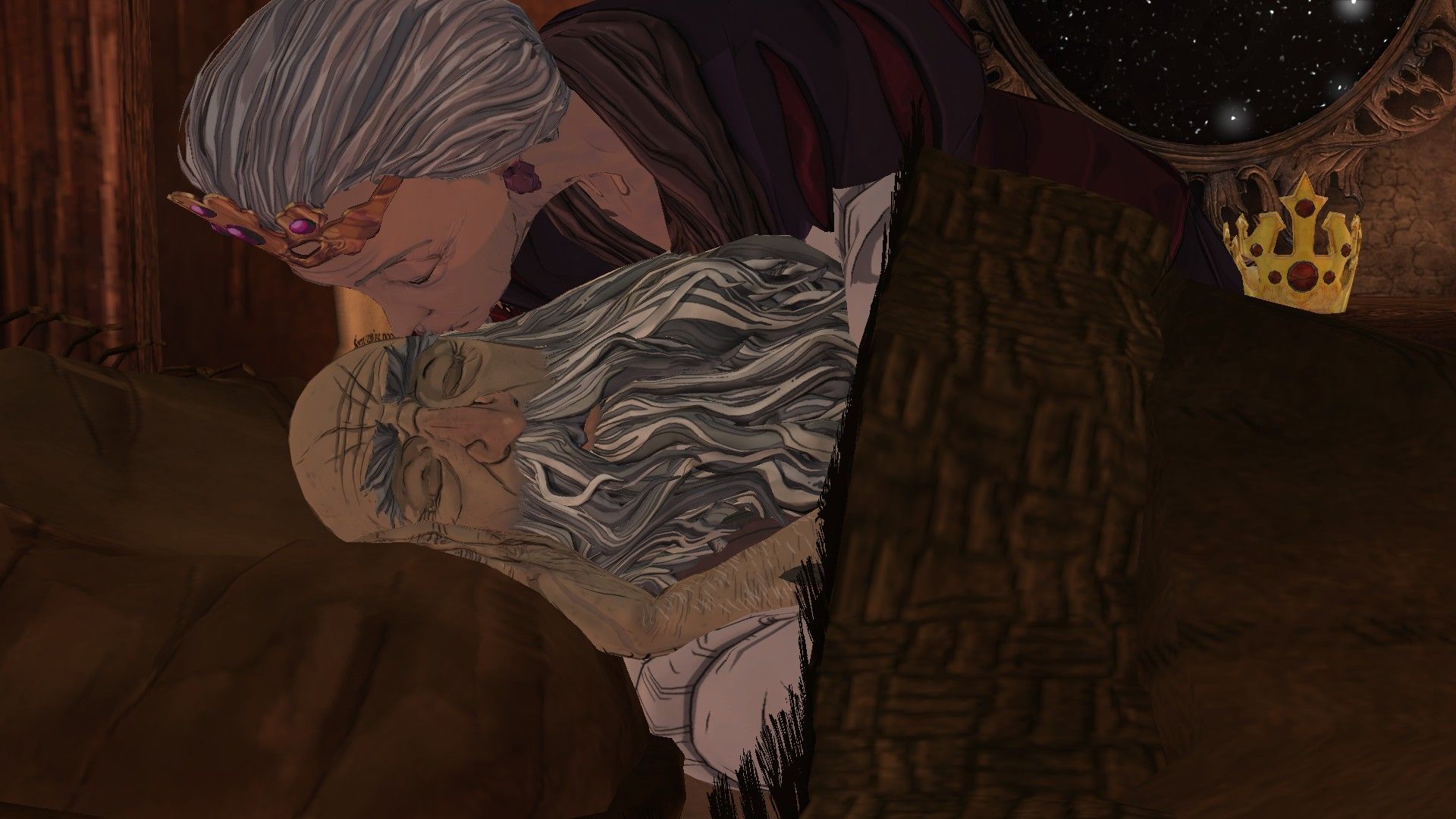 I love how King Graham’s worsening condition is conveyed in words, gameplay, and visuals. Places are covered up in white to represent Graham’s failing memory and there are inconsistencies in certain places when Graham is unable to remember the details. Without a doubt, it is one of the best storytelling devices in the entire series that The Odd Gentlemen have pulled out of their sleeve.

“The Good Knight” is just as much about King Graham coming to terms with death and discovering the legacy he wishes to leave behind as it is about concluding the long running rivalry between Graham and Manny. Watching Graham struggle with having that last adventure is like watching an addict looking for one more hit as they insist this will be the one before they quit. Whether Graham’s actual desire for that last quest is an actual addiction to adventure, an inability to stop and appreciate what he has, or a way of refusing to die is worth a lengthy argument in its own right; but the theme is a great choice for the final chapter of the game. The story is without a doubt one of the stronger plots so far, putting it very close to “Snow Place Like Home” in terms of quality. The only thing that would have pushed it to become the best of the five chapters is if more time was spent on plot development. I feel that the game was simply trying to jam in too much in a very short period of time. 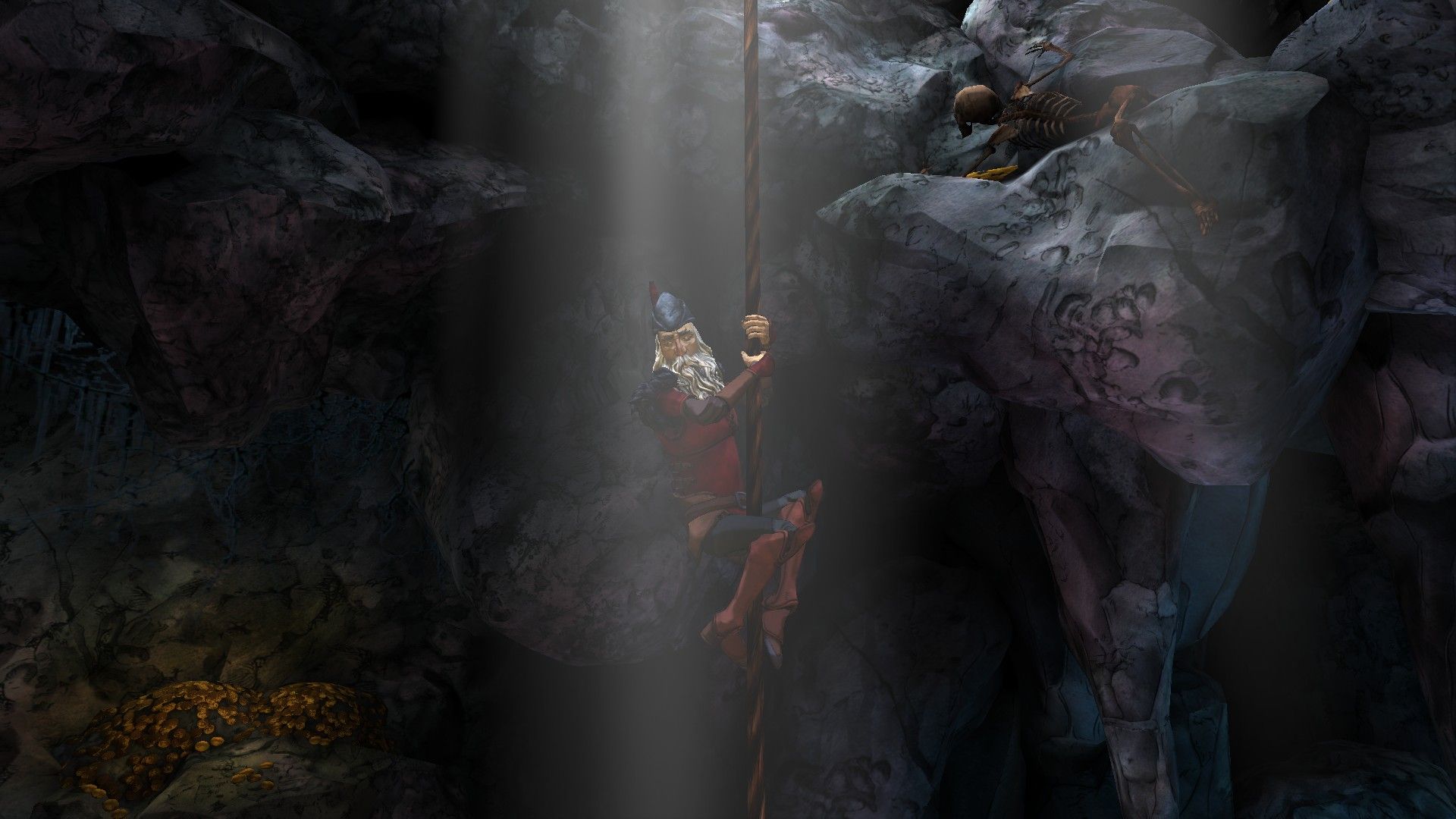 “The Good Knight” is sporting one of the most varied set of puzzles in King’s Quest, making the chapter a lot less stale than “Snow Place Like Home” or “Rubble without a Cause.” There are a couple of puzzles from previous chapters that makes a return, but overall the mix is very good. All the item fetching to find the four keys is a bit dull, but The Odd Gentlemen make up for it with some neat puzzles like the commemorative plates and multi-step numerical padlock. I did have issues with the controls for the “Snow Place Like Home” puzzle, as I discovered the borders were on the unforgiving side compared to what the screens displayed. Although not technically a puzzle, the throwback to 8-bit and 16-bit King’s Quest titles easily was the most memorable moment of the game. 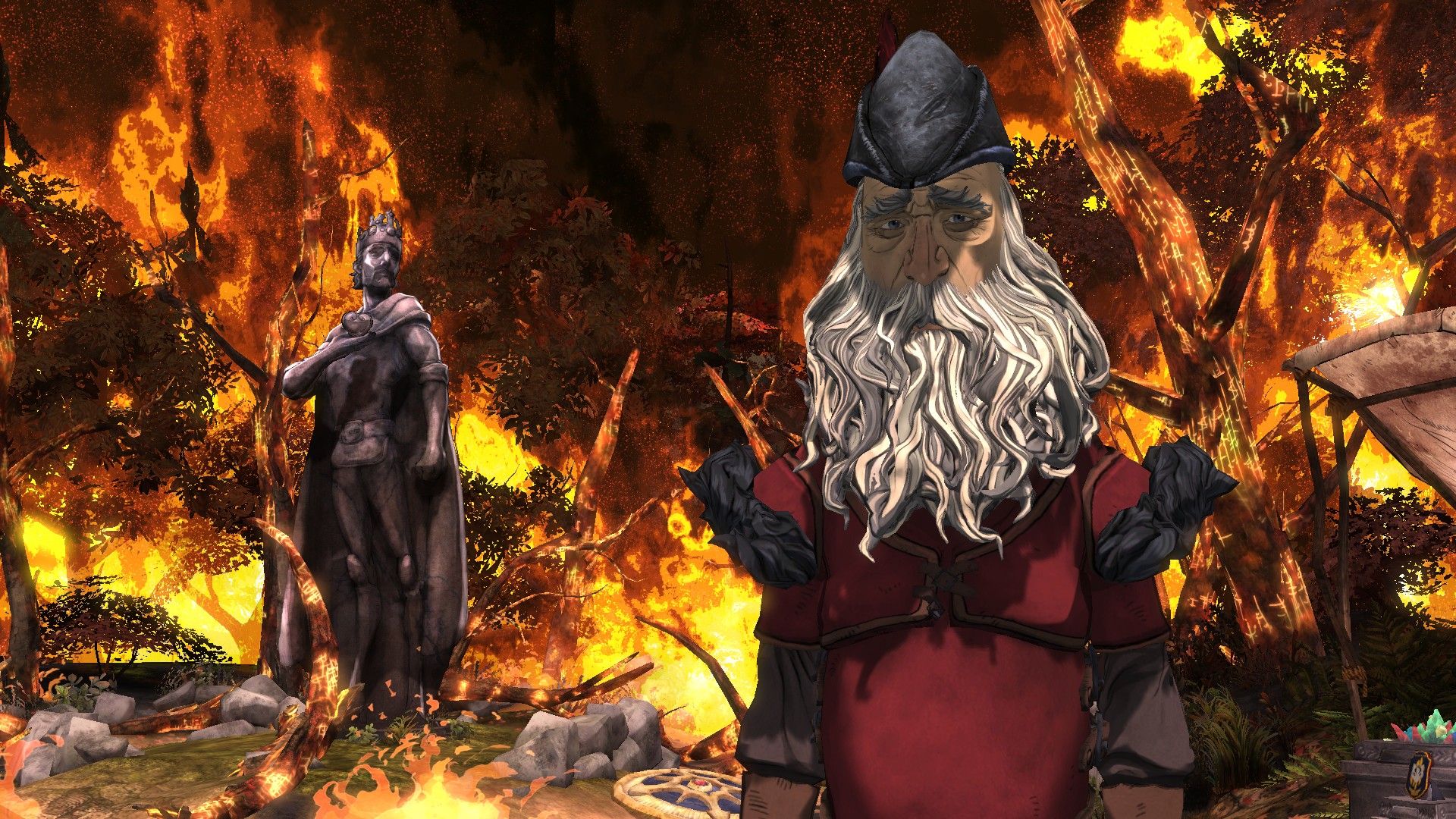 King’s Quest continues to be an excellent looking game. The art style is gorgeous and the graphics continues to be solid. I like the fact that the animations in this chapter have been tweaked slightly to reflect Graham’s advanced age. Small touches like Graham panting after climbing up a ledge is a huge change from the young and vigorous Graham players have become used to from the last four chapters. I think it is a great, subtle way to help tell the story. 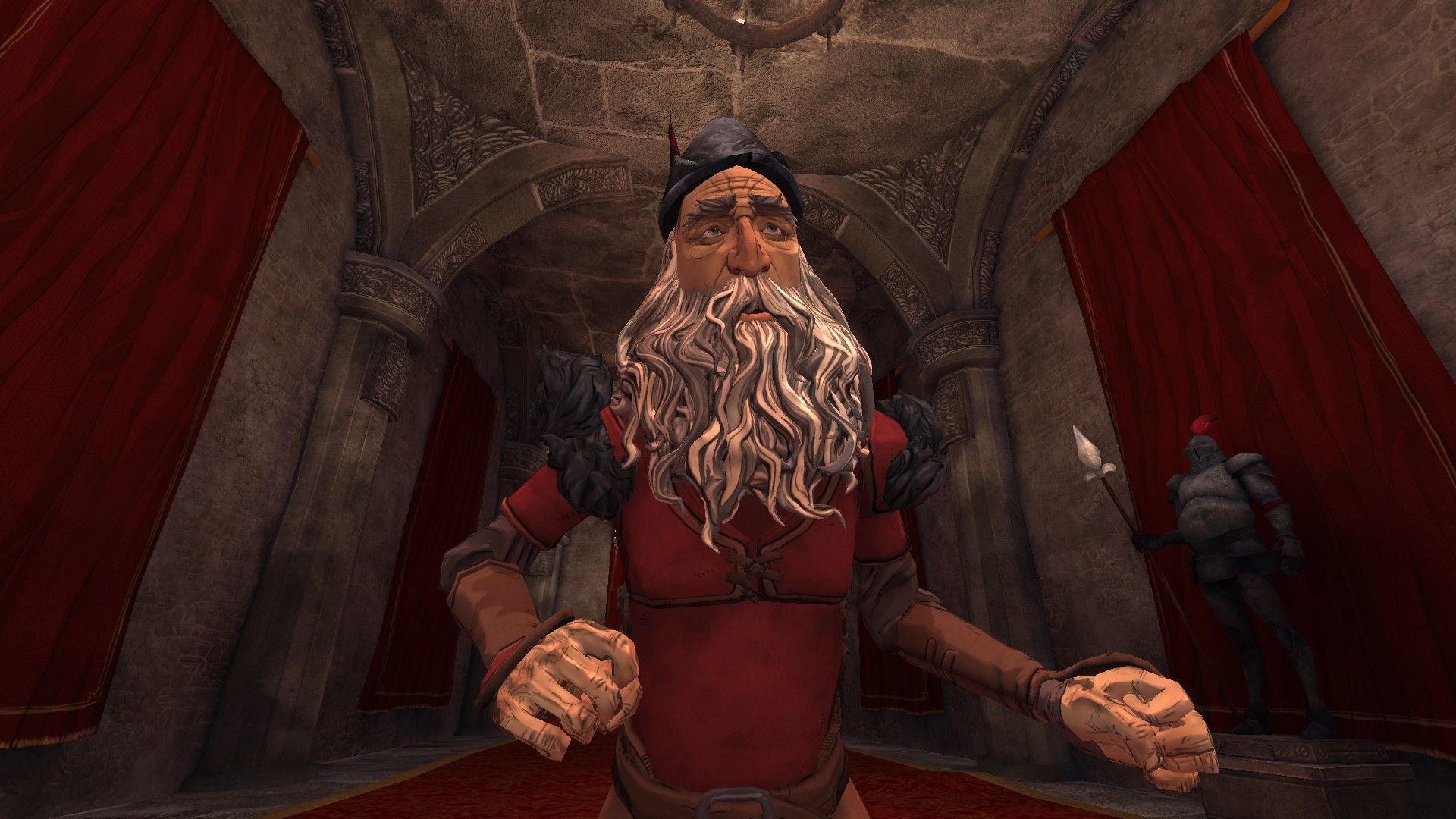 It seems like The Odd Gentlemen have saved the best audio experience for last. “The Good Knight” puts Christopher Lloyd’s acting front and centre, as the voice of young Graham is no more. Lloyd puts on a wonderful performance as the aged Graham, making me wish he played a larger role in the previous four chapters. While the sound effects are good, the soundtrack outshone the sound effects. The music hits all the right emotional notes just at the right time, serving as the perfect pairing to the game. 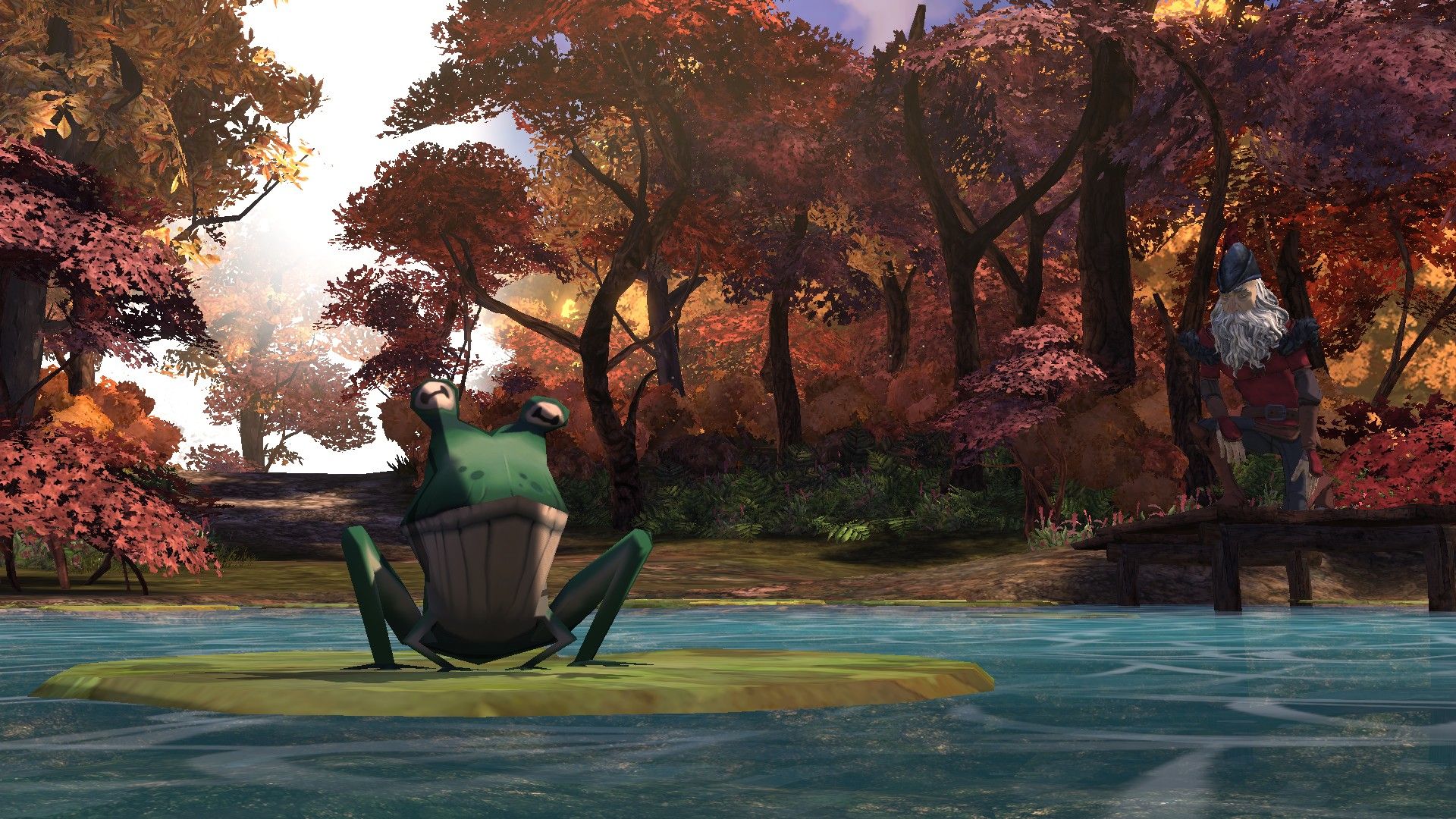 The King’s Quest reboot has had its struggles. It started strong, but it soon became apparent that The Odd Gentlemen had a serious issue with consistent quality. I am thrilled to see that King’s Quest is ending on a high note with “The Good Knight.” The chapter has one of the better stories, a great variety of puzzles, and an excellent delivery that pays homage to previous games.