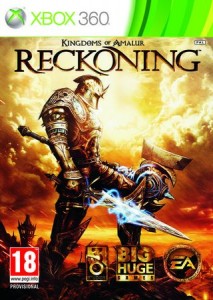 Reckoning takes all of these tenets into account, but it never truly grasps them. Instead it allows them each to be decided by the player, giving gamers an unprecedented level of choice in what they get out of this game.

What do you look for in an RPG? Reckoning wants to know and it’s willing to provide. Your fate is entirely in your hands, welcome to the Kingdoms of Amalur. 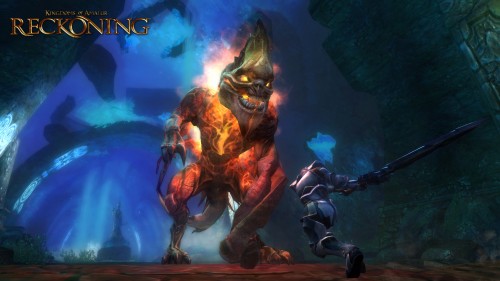 Story:
Kingdoms of Amalur: Reckoning doesn’t so much feature a plot line as it does a concept and universe. The story begins with the player awakening after having been thought dead, you are the only person in the entire world who is not bound by fate. From that point the player holds the fate of the world and themselves in their hands.

The universe of Amalur is a vibrant, expansive and well conceived one at that. It’s a world filled with intrigue and adventure, all waiting for the player to choose which path they will take.

The Kingdoms of Amalur world is massive and as such features an almost unfathomable mythology, arguably more so than other Western RPGs on the market such as Skyrim and Fable (Both of which have clearly positively inspired the world of Amalur in one way or another).

Fantasy lovers will find themselves in utter glee as they explore and uncover more about the history and mythos of the Kingdoms of Amalur and even the most complacent of fantasy fans can appreciate the scope. 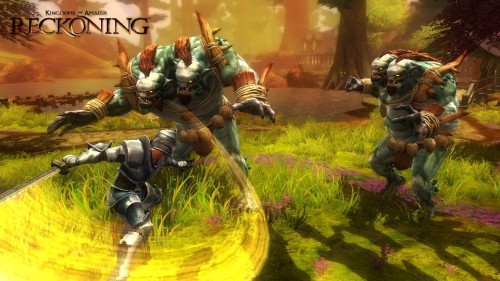 Gameplay:
Reckoning plays like most RPGs. You fight monsters, tackle dungeons, level your character, grow stronger and explore. It may seem like another generic RPG fare there but believe me when I say that it is far from that.

The game begins with the player having resurrected and looking to escape the dungeon you are trapped in. Throughout this first dungeon, players are given a taste of every possible play choice available in the game. You are given a chance to try out every fighting style available throughout the game, leaving you ultimately to decide which way you want it.

That choice right there from the very get go of the game is crucial to what makes Reckoning so very unique. More than anything the emphasis is on deciding your own fate in Reckoning. That is the main focus of the gameplay, particularly in the combat side of things.

Combat in Reckoning is put simply; amazing. There is so much customization and a plethora of different fighting style available, from the fast paced or stealth based fighting of Rogue classes to the more spell based fighting of the Magic using classes. This gives players a real MMO feel in the sense that there is multiple different ways to play with an incredibly deep level of customization to weaponry, spells, moves, etc.

This customization is capped off with what is without a doubt a revolutionary idea for an RPG – the ability to change class and fighting style by just pausing the game and flipping it over. It’s so simple a concept yet so effective in it’s execution. If there is a boss who is weak toward magic for example, but you play as a Rogue mostly and are having difficulty taking him on, you can simply swap to a magic user (pertaining you have magic gear) and adapt to the action.

If you love ploughing through dungeons or fighting monsters, you are sure to be pleased with Reckoning’s customization and emphasis on combat. This emphasis is pure indulgent fun, as it rightfully should be.

In terms of storyline and quests however, things don’t hold up as well as the combat system and customization. That’s not to say there are major problems, it’s all simply minor. For example a lot of the side quests are rather repetitive (a problem that plagues a lot of Western RPGs), but there is enough variety that it shouldn’t bother players too greatly.

That brings me to the other facets of the game. There are a few minor glitches and bugs, as you’d expect from a massive game such as this. The worst problem I suffered was a troublesome camera that would rapidly fly about with a life of it’s own when battling in narrow parts of dungeons which made it rather difficult to fight, but it wasn’t anything that lasted. It was only a brief and small problem. Other glitches are mostly graphical and nothing on the level of Skyrim thankfully.

Kingdoms of Amalur: Reckoning is an RPG fanatics fantasy game, there is a multitude of choices available as to how you want to play this game as well as a combat system that is by far one of the best ever implemented in a Western RPG. There is just so much unbridled fun available to players in Reckoning and that’s what people will take away from this. 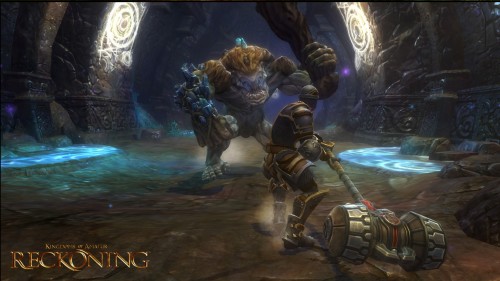 Visuals and Audio:
On an aesthetic level, Reckoning is a visual feast for the eyes. The world is filled with vibrant colours and well conceived character designs alongside unique environments that just beg players to explore.

The graphics are certainly up to par and the universe of Amalur is so well designed that you will definitely find yourself immersed in the wonders and small eccentricities hidden within this giant world. It’s a place players want to spend their time in and that is certainly in part due to the spectacular visual aspect of the game.

From an audio stand point, Reckoning features work from the great Grant Kirkhope of Rare fame. He has composed an amazing soundtrack that provides the right atmosphere to Amalur no matter the situation and should be praised for that feat.

All in all, Reckoning is a lesson in how visuals and audio should be in a modern day video-game. 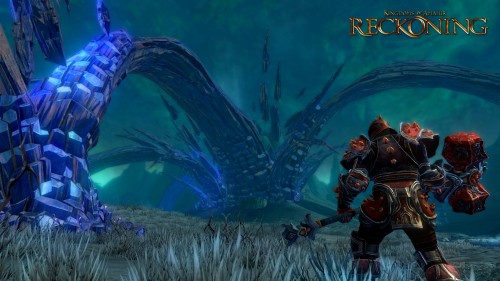 Overall:
Whatever choice you make, Kingdoms of Amalur: Reckoning is a brilliant game and a great start for what promises to be an impressive new franchise in the making.

Getting back to my original question, what is it we look for in an RPG? Well, whatever it is you are looking for in a role-playing game, Reckoning can give you that, and then some.

Kingdoms of Amalur: Reckoning has proven itself to be the hottest new RPG on the market and one that reminds players that it’s not always about the nitty gritty, but about the fun of gaming. Reckoning is pure enjoyment and is an experience that must be had. Journey into the Kingdoms of Amalur, it’s the right choice in a world with so many possibilities.