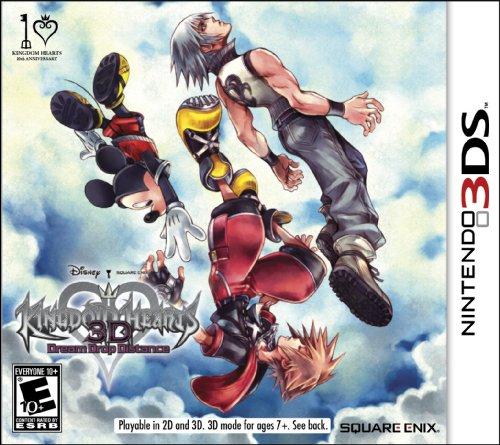 Overview
One decade ago, Square Enix did the unthinkable and released a unique and refreshing Action-RPG on the Playstation 2 by the name of Kingdom Hearts. At the time, there was nothing like it. This monumental title threw all rules out the window and utilized some of the most loved characters in the Disney Universe to tell an engrossing and deep plot with a cast everybody could relate to in one way or another. After seeing a sequel that matched the first Kingdom Hearts’ own greatness, Square and Disney decided to branch out the then highly successful franchise even further – by going portable.

I know..I know, there are many out there who love the handheld entries, but I personally got lost as these side games contained sub-plots that only seemed to cloud the focus of the tales the main offerings so proudly displayed. Yeah – they were decent enough fillers, but a great deal of us have been waiting for the true return of Sora for sometime now, and Dream Drop Distance for the 3DS looked to be that missing piece that would bound the series back together. Kingdom Hearts: Dream Drop Distance, or 3D for short, is the 7th installment in the franchise and joins both Sora and Riku as they set out to become Keyblade Masters. The question is, does this journey finally feel as epic as the first two Kingdom Hearts games, or is this just another filler until better things come forth? Let’s find out. 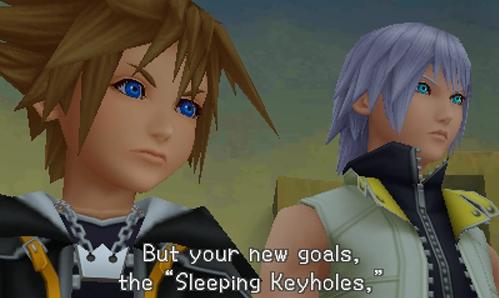 Story
To describe the plot of Kingdom Hearts 3D is kind of like describing a complex piece of art, hung in a museum. Now, I’m not by any means comparing this title’s narrative to art, but what I mean is that I feel each person that plays this game is going to take away a little something different from the next. The general story is that Yen Sid (from Fantasia) is putting Sora and Riku through a series of tests to become Keyblade Masters in order to stop the returning and devious Master Xehanort. Along your trek to unlock seven sleeping worlds, a lot of past faces show up, such as Mickey, Goofy, Donald, and the usual KH crew. New characters have also been introduced into this installment as well, with the likes of the protagonists from The World Ends With You, and a good selection of new Disney characters we haven’t seen cross paths with our hero thus far. 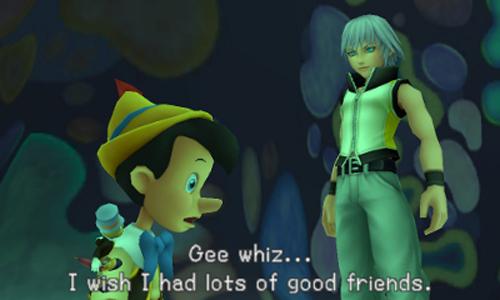 At first, I thought the plot was progressing swimmingly. I mean, it’s not too hard to pull off such a simple plot device and for that story arc alone, Dream Drop Distance succeeds in deliverance. The problem with the story as a complete package however is that there is a lot more going on from the side, and unless you have heavily followed the franchise down it’s recent twisted road, you are more than likely going to find yourself stumped with what is going on. Drop mode doesn’t really help matters, as it’s a newly added mechanic that switches players between Sora and Riku abruptly, quickly taking the player out of one plotline and into another. We’ll get to that in a moment, but without saying too much, this is still an easy enough story to follow, but it’s a difficult task to truly understand everything that comes your way.

Gameplay
Now if you have been craving that magnificent combat that we seen on consoles so long ago..you know, that fast and fluent hack-n-slash action, then you will undoubtedly be pleased with what Dream Drop Distance has up it’s sleeve. Sora (or Riku) can be controlled with the slide pad and never miss a beat when it comes to your standard exploration of these lush Disney worlds. When fighting the new enemies in the game (known as Dream Eaters), it’s pretty much an all out button slapping fest you would expect to see from the game, with a nicely organized command list in tow for your special attacks and healing. The Keyblade still has that satisfying element that keeps the combat from becoming dreary or tedious, and the many upgrades players will encounter only improve it’s uses as the game flows on. 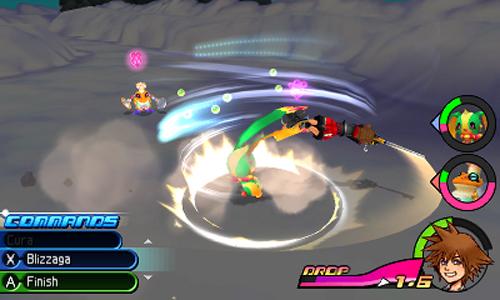 Speaking of flow, that in itself is a major part of the combat scheme within this game. Flowmotion is a new ability that lets our main protagonists jet in the air at full speed; whipping around poles, bouncing off walls, and usually smashing into enemies with all of that momentum in a hefty parkour flavored spectacle of sorts. A simple tap of the Y button is all that is needed to trigger this mechanic, and while I did have a few moments that a set off like a rocket when just trying to perform a dodge (they both have the same input), Flowmotion proved to be a both competent and enjoyable addition that blends nicely with the tight control layout.

Yes, the flow is with this one without a doubt, but other elements feel a bit too stapled in. Instead of having party members like Donald or Goofy, 3D partners our heroes up with spirits that can assist in battle. Players can create up to two of these magical little beasts at once, and link with them to get the edge in battle. It all sounds great on paper and the thought behind these Poke-esque allies is there, but I found that the fine details that are needed to properly use these spirits can quickly boggle the experience down due to the system’s unnecessary complexity. To up the stats of your beast, you must partake in little mini-games that resemble a generic pet sim – with all of the stylus petting and photo taking you could ask for. To do this, you must head to a menu, pick your pet of choce, run through a large variety of options, and then get to the tapping on the screen. There are a good number of power-ups and abilities that each spirit can possess and all of your efforts can greatly pay off, but the 3DS’ gimmickry attached just makes these little creatures feel like more work than their worth.