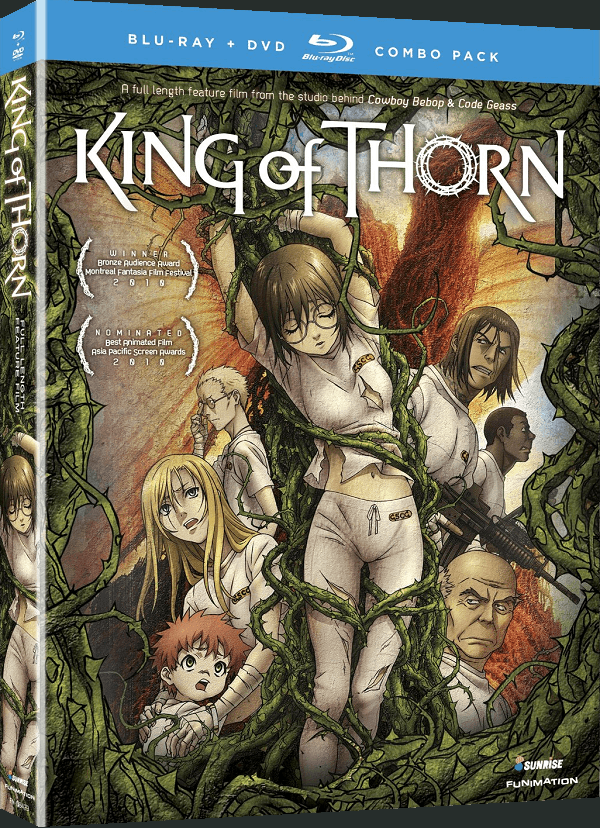 Overview:
The end of the world can come in many different forms, what with global warming becoming a more prominent issue in recent years, a meteor simply hitting the Earth and wiping out all life on the planet or even an unstoppable virus could spread throughout the land. End of the world style media has been around for quite some time, and while most versions of this genre focus on the undead rising up for flesh, there are many other flavors to be explored.

Enter the King of Thorn film which happens to be an adaptation of Yūji Iwahara’s manga of the same name. Originally created back in 2010, FUNimation has since brought this movie to English speaking shores. Does King of Thorn provide a gripping story throughout its length or does it falter in presentation?

Story:
The year is 2012 and a strange disease has begun sweeping the globe. The disease is called the Medusa Virus and it is unlike anything the world has ever experienced before. With a 100% mortality rate, anyone infected with the disease will begin incubating the disease within them, infecting everyone near them, before suddenly turning into stone and crumbling away into dust. 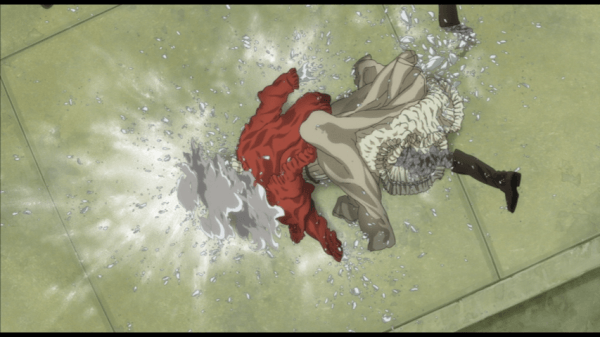 Being that no one has ever seen this disease before or even knows where it comes from, the world has absolutely no way to treat the rapidly spreading virus. Entire families become infected and die, cities and social order begin to fall apart as even the President of the United States becomes petrified by the disease. With stone statues slowly beginning to outnumber living humans, it seems that the end of mankind is upon them.

However one company has a plan to try and save a hundred and sixty of these infected people by entering them into a special facility that will allow them to be put into cryogenic sleep, placing their bodies in a dormant state that will not allow the Medusa virus to advance, and only awakening them once they have found a cure for their disease or once a hundred years have passed.

With only a limited number of people accepted, the company has taken a selection of people from all around the world, with an interesting mix of children, teenagers, adults and even the elderly of all different races.  Among these 160 people, a young girl named Kasumi has been selected to enter the cryo sleep; however her twin sister Shizuku was not selected. With only an AI system named ALICE monitoring those who have been put to sleep, these 160 lucky individuals go to sleep with the hopes of a cure. 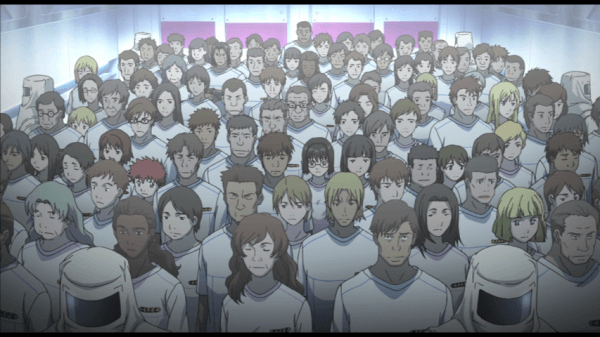 However, once everyone wakes up suddenly, they find the facility overrun with strange thorny vines and dilapidated. As Kasumi and the rest try to figure out what happened to them, strange creatures appear and start killing a number of the survivors. With survivors dying left and right, Kasumi and a small group of survivors must try and make it out of the nightmare filled facility and try to understand what has actually happened to them.

With King of Thorn only being a movie and a little under two hours long, the plot moves ahead at a blistering pace, though it does feel a little bit formulaic with how certain survivors are easily singled out by the fact that they are the only characters who were given any semblance of attention before going into cryo sleep. Thankfully the fast paced survival theme of the movie lends itself well to these shallowly developed characters, as viewers are given just enough information to care about them, such as what they left behind and what they are striving for. 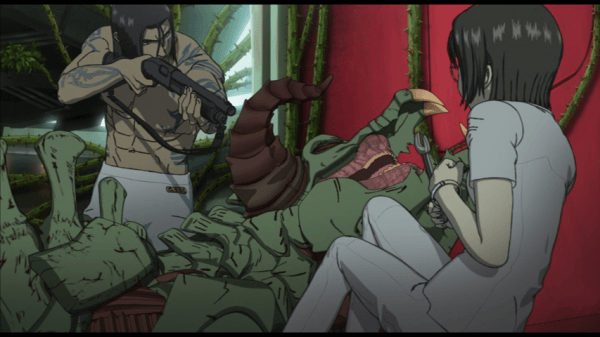 As it stands however, the high-speed developments and survival theme of the movie works well with the plot, which takes a number of unexpected twists and turns which can catch the viewer completely off-guard, though it does feel like there are more than a few things left unanswered by the time the credits roll.

Visuals:
Interestingly enough, when Sunrise decided to create King of Thorn they chose to combine a rather appealing blend of CG animation and standard animation. While the majority of the show and the characters themselves are often portrayed in standard animation with usually satisfactory results, all of the creatures in the show and various vehicles are implemented with the use of CGI. 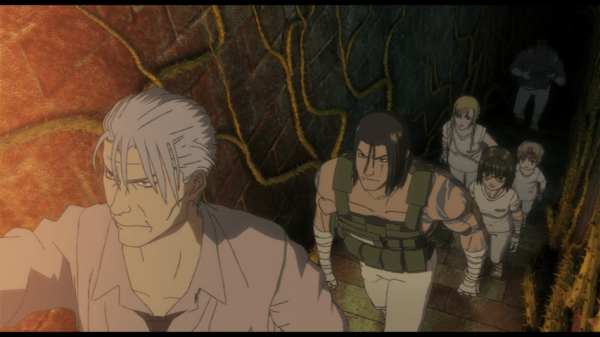 During some action scenes, the characters themselves are also presented in CGI usually with middling results that often stand out, but at least keep the same level of detail. Sunrise did a splendid job weaving together these two styles which often stand out far too much from one another and because of that viewers are given a pure treat for the eyes.

Audio:
As one would expect from a FUNimation release, the film has been given both the original Japanese dub as well as the new English voice track. As such viewers can choose to view the anime however they feel like, though it seems that FUNimation paid extra care to the voice actors in King of Thorn as every character feels rather believable with their performance. Remember how earlier I mentioned how the survivors were taken from all over the globe? Many survivors have been given various accents to fit their region and these accents sound as real as one would experience in real life. 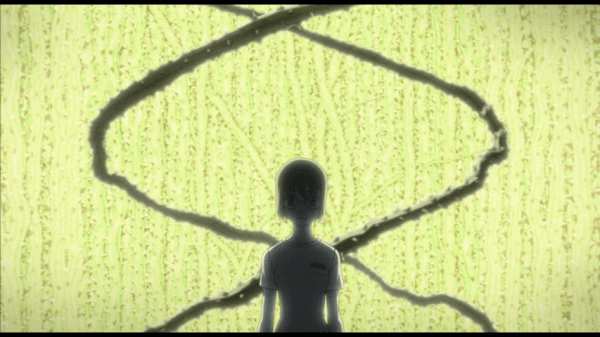 As far as background music goes it always feels appropriately used with the tracks matched excellently with the action. This level of quality is retained with the movie’s sound effects as well as all of the creatures and sounds of death, destruction and desperation combine to create a hectic and worrisome atmosphere that works wonders with the fast paced story.

Extras:
As far as bonus features go for the King of Thorn movie, those expecting a slew of special features may be a bit disappointed as most of the special features are your standard fair. This includes things such as trailers for past and upcoming FUNimation releases, original Japanese trailers of the movie and a television spot. 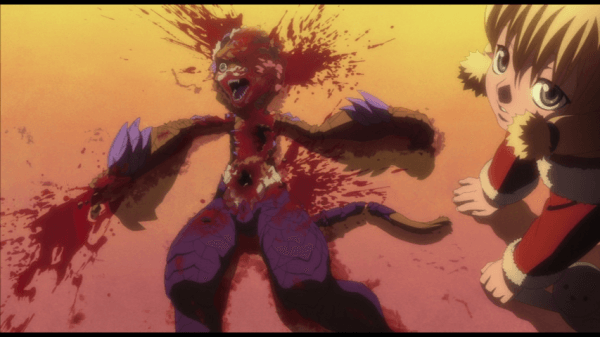 To round out those small inclusions we have a talk event with the director and producer of the film as well as an interview with the director himself. These are slightly informative, especially the talk event where the audience is allowed to ask the questions. It is worth noting that these two specials are in Japanese however, so English subtitles are required.

Overall:
King of Thorn may hold a few similarities with other apocalypse titles, it provides a fast paced survival story that holds as many twists and turns as the vines wrapping the facility in the movie. Viewers are taken on a roller coaster ride of adrenaline packed survival. Combine this with the fact that the movie is a treat for both the eyes and the ears and you have an excellent anime movie that should not be passed up.