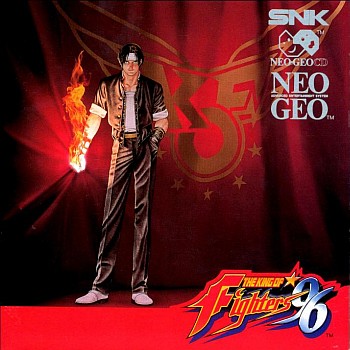 The King of Fighters can be described as SNK’s answer to the highly successful Capcom franchise Street Fighter. With the first game released way back in 1994, the series has featured various original and established characters of the SNK world fighting for supremacy and to be named the King of Fighters in a tournament that took place across the world. This is a first in King of Fighters ‘96, the third game in the series. It has been re-released as part of the NeoGeo Station on the Playstation Network, alongside Metal Slug 2. It is a well-developed game, with excellent gameplay, well-drawn sprites and environments and well-created music. It doesn’t offer anything new as a re-release, but that doesn’t deter from the enjoyment. 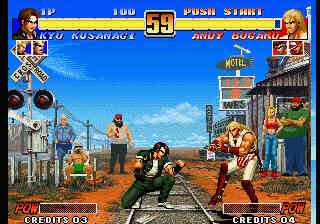 Gameplay
The King of Fighters ‘96 core mechanics emulates that of every fighting game that was conceived during the boom of the 1990’s. Players will use the face button to perform a weak and strong punch and a weak and strong kick. Each character also has their own arsenal of special attacks. Like any other fighting game, this is usually in combination of a directional button (or multiple directional buttons) and a face button. What King of Fighters ‘96 includes is the ability of charging up one’s power. When one holds down the Left Shoulder button, the fighter charges themselves and a bar at the bottom of the screen fills until it flashes blue. Another way that this bar fills is taking damage.

There are three modes of play: Team, Single and Survival. Team Mode is taking a team of three fighters through the King of Fighters tournament. Single is the same as team but the player only has control of one player. Survival is what the mode suggests, take one character and fight until your health is fully depleted. Instead of the four difficulty settings other NeoGeo re-releases offer, this is on a nine number scale. This is great seeing as the player can tailor their skill level to a more in-depth difficulty system. The game also features versus mode over ad-hoc.

King of Fighters ‘96 also features an array of characters for selection. Like any fighting game, each character has their own distinctive fighting style. Each character is separated into teams. Now, some of these teams contain original characters, but also characters that have appeared in other SNK franchises. For example, King of Fighters ‘96 features characters from Metal Slug and Ikari Warriors. This is quite different as characters that are mashed up are usually in the mash up spinoffs, like Marvel vs Capcom or SNK vs Capcom. It gives the game a different feel. Of course, if one is not familiar with the characters of other SNK franchises, then this fact will go pass them like an uninteresting conversation.

Each character has their own move set, which is common in fighting games. This gives the characters a sense of individuality. Of course, the moves range from being basic inputs to very complex. Also, each character has their own Super Moves. There are two conditions that allow the player to execute the Super Move, of which one must be met: the power bar is at the maximum level or the player’s health bar is at a critical level, signalled by the bar flashing red. However, if both conditions are met at the same time, then the player can execute a more powerful version of the move.

Overall, the gameplay, despite being much of the same of any other fighting game, is still entertaining and enjoyable. There is a certain level of excitement and satisfaction in playing this game. With a cast of great characters and simple moves, the gameplay lives up to the King of Fighters name. 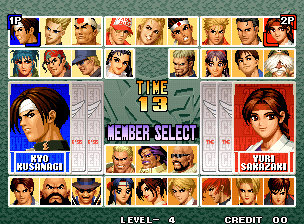 Visuals
The visuals are simply amazing in terms of their age. Each punch, each kick and each move runs smoothly. I did not encounter any slow down or lag during gameplay. The sprites are well drawn. Updated from the previous two games, I would say it is a job well done. It reminds me of the other 90’s fighting games, such as Street Fighter. In fact, I would put the designs as high as those from Street Fighter. Every little detail, whether it will be their facial features and clothing is captured brilliantly. The backgrounds of the stages, as well as the stages, are well designed. Other than that, there is not much I can say about retro visuals other than they are great. I would suggest that 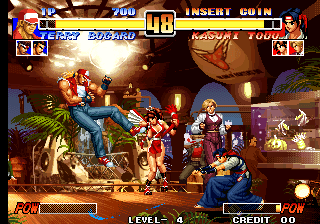 Music
The music of King of Fighters ‘96 is a great collection of tracks to listen to. The main theme is nice to hear. Each team has their own themes and some of them are quite awesome. As a re-release, it retains the classic sounds of the original. Most tracks fit the overall theme of the game, that of fighting. They pump the player for the battle that they must face. Of course, as with previous NeoGeo Station releases, there is a soundtrack feature where the player can listen to the whole soundtrack. This can be accessed at the main menu. 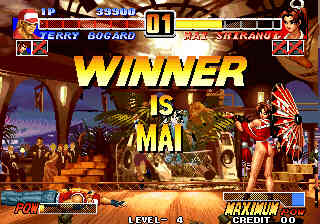 Overall
This is a great game if you want to have a nostalgic trip down memory lane… if, of course, the player did own the original copy. What makes this game enjoyable is the excellent gameplay, which caters to the fans of the fighting genre very well, the well-drawn visuals, which were updates to the previous two games and the awesome music that is heard during the fights. Of course, this is only a re-release untouched, but it is a well-built game that deserves the download.