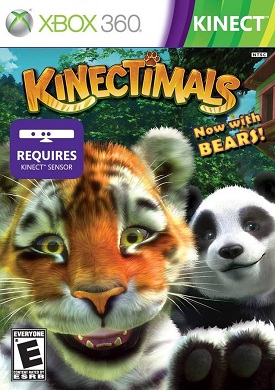 Overview:
Kinectimals was first released as a launch title for the Kinect sensor with the aim of giving players – mainly kids – a virtual pet to interact with on their new system. After Nintendogs on the DS showed that a lot of people were keen to have a pet on their new hardware, and even the success of the handheld tamagotchi toys before that, Microsoft gave Xbox gamers a taste of virtual animal-human friendship by offering a choice of cubs from the cat family to select as a companion. More or less a year on and Kinectimals is back, this time with bears. It isn’t a completely new game, more of an expansion pack, as owners of the previous game can download the content for 1200 Microsoft Points from the Xbox Live Marketplace. But for those who missed out first time around, it’s an opportunity to play the original cat adventure, as well as an all-new, albeit very similar, adventure a bear.

Story:
Helped along by an English-speaking, lemur-fairy guide, you learn that it has been a while since the animals have had someone to play with, after the explorer who first found them has left on another adventure. You simply get to know your cub, be it bear or cat (or both, as the two separate save files can co-exist perfectly fine), learning about new parts of the island as you form a stronger bond with your animal companion.

Gameplay:
As it was originally a launch title, the gameplay is very much geared towards showing you what the Kinect can do. Just as much as Kinect Adventures, which comes bundled with Kinect, lets you get to grips with the new technology, although this wasn’t packaged with the system it still teaches you new ways that the Kinect works. Going back to it with Kinectimals: Now with Bears, you realise that Kinectimals had somes ideas and ways of using Kinect that have barely been used since.

For example, stepping around in an arc changes the angle at which you view your animal, which often comes into play in activities where you need to aim, or can just change the area where you are petting your creature. Although Kinect’s focus is on movement, using the entire space in front of the camera is surprisingly underused by most Kinect games. Many have you standing on the spot the whole time. Another use of Kinect that features in the original and Kinectimals: Now with Bears which isn’t made use of in other games is object scanning. Not only can you scan in promotional items to unlock extras (something which won’t apply for most unless you buy the cuddly toys of have pre-order bonuses), but you can scan in items and poses for the Kinectimals to recognise in future. 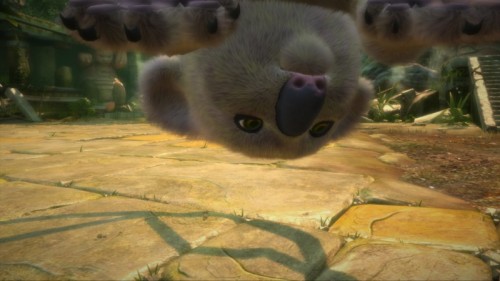 There are a choice of 5 bears initially – black bear, grizzly bear, cinnamon bear, panda bear or polar bear – and much like with the cats, more are unlocked as you progress. Gameplay is broken down into a number of interactions and activities to do with your newly selected infant bear: you can feed a water your Kinectimal; you can get out toys to play with, such as a ball to play fetch with (who knew Panda bears like to play fetch); and you can pet them and teach them new tricks. Each interaction earns a certain number of coins, which act as the currency, as a shop allows you buy new food and items to give to your cub, in addition to furniture to kit out your home space.

Tricks are performed by your pet mimicking the actions you do, such as jumping -or rolling around on the floor as you will have seen on the advert – although not all are gestures. Some can be controlled with voice commands, even the aforementioned ‘playing dead’ one, which is a welcome option as it saves you from picking up unwanted carpet fluff on your clothes. Menus and choice screens can also sometimes be navigated using the Kinect’s in-built microphone. Caring for your creature isn’t mandatory, although both the bears and cats are quite sweet, so youngsters will enjoy stroking them, cleaning them or feeding them. The addition of bears is a good one; don’t get me wrong, the cats are cute, but they seem elegant and ever so slightly more aloof than the cuddly bears.

Contests and challenges are activated either by getting out a certain item – such as a ball triggering a set of targets to hit or items to smash – or by moving to a specific area where the activity takes place. An easy difficulty ensures theses challenges aren’t a problem, but there are set scores you have to achieve in order to win gold, silver and bronze medals. The type of challenges, however, don’t differ much for bears when compared to the ones for cats. In fact, the whole adventure is very similar, albeit modified for the new species with a few new aspects thrown in. Most of the appeal of bears will be visual and down to preference rather than any gameplay differences. 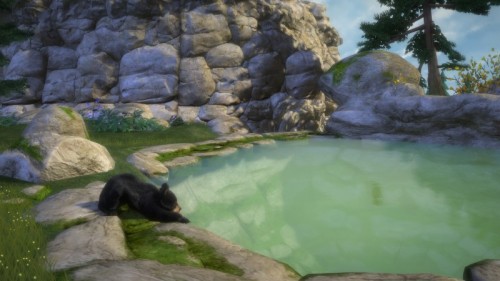 Visuals & Audio:
The tiger and lion cubs were always cute, but the bears manage to be even cuter. The visuals make their fur look sleek and soft, even though, as your hands are hovering in the air and making no physical connection when bonding with your Kinectimal, you can feel a bit distanced from them and a lack of interaction. Still, their faces and movements are warm and welcoming, and your island surroundings are pretty stunning. It’s an island paradise to frolic with your Kinectimal friends.

The subtle sounds and music combine with the relaxing surroundings to create a great feeling of safety. Everything is clearly explained by your guide (for some, it will come as too many interruptions) and the slow-paced, laid-back style of play suits it really well. The game never truly rushes you on; for the most part, it is content to let you interact with your Kinectimal and move through the game at your own pace. 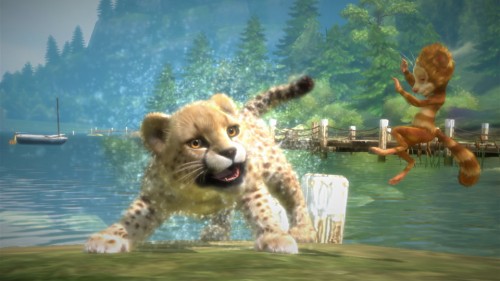 Overall:
Given that Kinectimals: Now with Bears got a retail release, the average consumer would be forgiven for mistaking it for a completely new game. Instead, it’s like a large expansion pack that effectively doubles the size of the game with the addition of bear cubs to the existing tiger/lion cubs. It’s also available as DLC for those who own the original, but with regard to whether this group should pick it up or if those who had Kinectimals but have since traded it in should pick up the retail package, it comes down to personal preference.

The game itself isn’t all that different, with a similar structure and many of the same activities with bears as with cats, but if you (or, more likely, the younger people who will be playing it) have a soft spot for bear cubs it’s irrelevant, as bonding with the virtual bear cubs will still seem fulfilling. Plus, although the wow factor of the game has since worn off since the launch of Kinect and the original game, it’s still a worthy new experience for younger gamers who missed out first time around.