Kinect is Microsoft’s creation for the new generation of gaming. Microsoft has placed tons of funds into advertising Kinect, from their over the top reveal at E3 using Cirque du Soleil to the many commercials and promotions trying to bring in both casual as well as core gamers. Microsoft is the last console owner to release its version of a motion controller, and they decided to go all out by completely removing the controller and just leaving the motion.

Kinect comes with a bunch of features, such as three cameras and four microphones. I’m not exactly sure why there are four microphones but supposedly it has something to do with Kinect’s extremely good voice recognition. With the three cameras, Kinect is able to catch the motion of your body. You can wave your hands, move side to side, move forward or back, move your head, move your legs, jump up and down, and pretty much any other motion. If your avatar is currently tracking your body movement, then that avatar will copy what you do. The reaction is instant, and it’s like seeing an avatar version of yourself. The only complaint I had was that it can’t tell if you turn around, it gets all glitchy if you try it. What reason would you want to play backwards? I don’t know, but I’m sure you can find one. As for the voice recognition, it is superb. Even people with lisps or even a heavy accent can use Kinect’s voice recognition without any problem. Microsoft has gone through a lot of trouble to enable it for everyone that speaks english.

What can you do with total motion control and voice recognition? Many games are implementing both, and the Kinect Dashboard lets you go through and look at all your stuff using only your voice or your hands. You can also surf through videos and music in the improved Zune app on the Xbox dashboard. This makes it extremely easy to navigate the Xbox without ever having to pick up your controller. Of course, if you actually want to play a game that needs a controller, you are going to have to pick up the controller once the game loads. 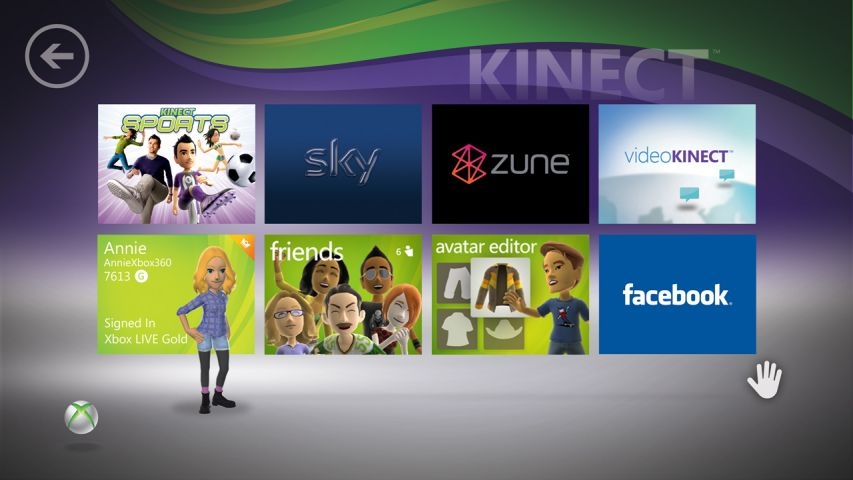 One of the more subtle but awesome additions is Kinect’s Video chat. It basically works like a new and improved video chat using the Kinect software rather than a basic webcam. Since it uses the Kinect software it is able to track you movements. As you walk around the room talking to the person over the internet, Kinect will keep you in frame. If someone else joins you, Kinect will adjust to fit both people into frame. This video feature shows a lot of the capabilities that are within Kinect.

This brings me to the biggest problem that is found in Kinect: It requires a large empty room to be used successfully. If you live in a small apartment or plan to play this in a small room, you are probably going to run into problems when using it. Kinect requires a certain amount of space to be used correctly. All games require a different amount of space; however, the average is about 7 feet. You have to be able to stand 7 feet away from your the device, in order for it to work properly. Aside from this, you also need a big empty space to move around in, so say goodbye to that coffee table of yours. If you want to play with multiple people, you’ll need even more room. Most people don’t have this kind of space in their house, but it is required to use Kinect properly. As an example, in order to use Kinect in my small room, I had to get rid of my bed frame, move my dresser, slide my desktop closer to the wall, prop my mattress against the other wall, and then center my television. After all that, my back is still only about 6 inches away from the wall behind me. 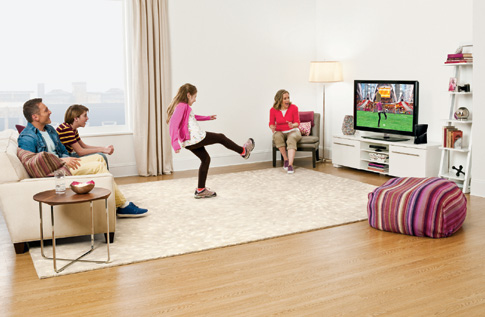 Believe it or not, there are some complaints about the fact that the ever present eye of the Kinect is a little creepy. Since the Kinect is always on as long as your Xbox is on, it is as if it is always looking at you even when you aren’t really using it. Three Cameras can do a lot, especially when connected to the internet. Since it also has the ability to record video and snap pictures, not knowing what your Kinect is doing at any given moment can be kind of creepy. My friend actually has a towel on top of his unit whenever he isn’t using it. I on the other hand don’t really care. It’s all a preference thing.

While Kinect is an awesome technological feet, what is really going to make or break Kinect is the games being released on it. Currently all games that are coming out seem to be geared towards a younger, more casual audience. Kinectimals for instance, isn’t even a viable choice unless you have a younger sibling or little kids in the house. Like all motion controlled games, these aren’t intended to be used to unwind and relax. They require a lot of activity and can leave you out of breath a lot of the time (well, except Kinectimals…)

Any worries you may have had about Kinect can be wiped away. Aside from the need for a spacious playing area, Kinect works like a charm. All the kinks have been worked out and with the easy setup, anyone can plug it in and start playing. The price is exceptionally expensive at $150 (USD), but the slightly lower game prices ($50 USD) should help ease the tension on your wallet. With the current Selection of games, Kinect is perfect for the family or a younger sibling with a few scattered games for the older audience. Kinect is a lot of fun with a bunch of potential. Based on the future games, Kinect can really become the future of controller free gaming.

I give the Kinect