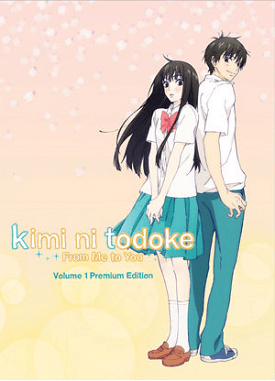 Overview:
When it comes to the romance genre, there are plenty of different routes that an anime can travel down. There is your relatively standard and popular harem route where multiple girls try and will then focus on one girl in the end, there are others where someone may just be too dense to understand the others feelings and then there are those that have a very slow build as two characters realize that they love each other over a long period of time.

kimi ni todoke -From Me to You- originally started as a manga back in 2005 and is still being published today after winning numerous awards. Since then it has received two anime adaptations and NIS America has brought us the first volume of the first season of this shōjo romance. With plenty of fans waiting for a great romance anime, does kimi ni todoke deliver?

Story:
Bearing a resemblance to a popular movie star may be a great way to start a conversation or make friends easily, but bearing a resemblance to one of the most feared characters from a popular horror movie actually can cause the exact opposite to happen. Sawako Kuronuma may be just your average high school girl but unfortunately she has one thing that sets her apart from everyone else, and that is her resemblance to Sadako the feared character from the Japanese version of The Ring (not the American remake). 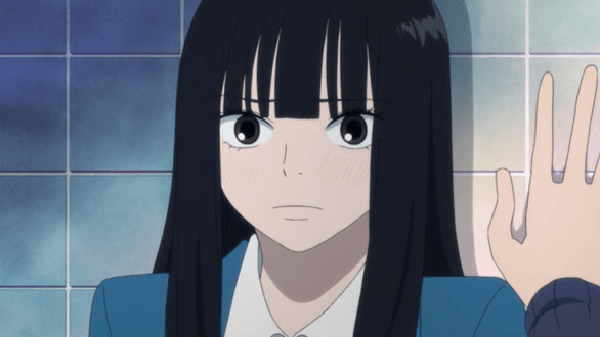 Because of her appearance she is feared by everyone around her and no one wants to spend any time near her for very long for fear of being cursed or having ghosts haunt them. However this is not true at all and Sawako actually is a very sweet and kind girl who just happens to never have been able to make any friends before and thus has very poor social interaction skills so despite her best efforts to be friends with her classmates she is shunned by all of those around her.

However this all begins to change once she meets a boy named Kazehaya who is always cheerful and willing to talk with everyone he meets.  Upon meeting Kazehaya Sawako begins to emerge from her shell and start to act a bit more like a normal person as she begins to interact more with those around her. The story then follows Sawako’s many firsts and experiences as she begins to discover more about herself and make friends. But most importantly, can love blossom between the awkward but endearing Sawako and the popular Kazehaya? 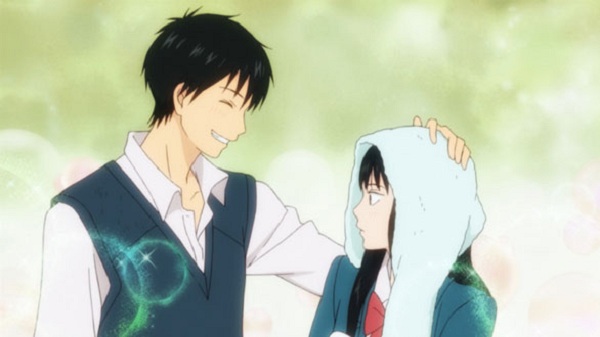 kimi ni todoke -From Me to You- provides a more realistic type of romance that you wouldn’t normally encounter in most anime. To be honest, plenty of shows involve various situations that are either completely outlandish or involve characters that have had horribly troubled pasts that have left them scarred in some way. When it comes to the characters in kimi ni todoke delivers in spades. Sawako has had a troubled past but isn’t anything entirely unbelievable and with the story revolving around her moving past her limitations the amount of character development she receives is extraordinary.

This is only helped by a likewise believable supporting cast. The main male lead Kazehaya is a normal type of guy who just happens to be very popular and good at baseball which humanizes him in a way that most male characters don’t see which is a breath of fresh air, especially when it comes to the shōjo genre which is full of clichés.

As for the rest of the cast we see two girls who become fast friends with Sawako, Chizuru and Ayane. The two may seem like an odd pair for the quiet girl at first but their personalities work perfectly with one another as Chizuru is your tomboy type of girl but is also moved to tears whenever something simple happens, usually involving Sawako. Ayane loves to play pranks on people but has a good heart and tries to help Sawako the most out of the rest of the characters in the show aside from Kazehaya. 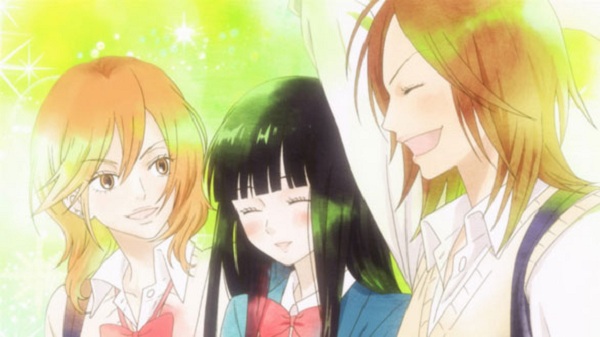 Finally we have Ryu who is a very quiet man who rarely interjects in conversations but whenever he speaks he usually has a point to make. The only real conflict begins when a rival for Kazehaya appears in the form of Ume and her numerous attempts to underhandedly sabotage Sawako’s relationship with her friends and especially with Kazehaya so she can replace her by his side.

While some people may enjoy a slow building relationship, the kimi ni todoke can sometimes slow down to such a slow crawl that an entire plotline may not be finished for multiple episodes, or not even finished in the first volume at all. There are slow and strong anime and those that eventually become a bit boring due to their slow development speed. While this is mostly alleviated thanks to the amount of humor that the show can provide.

Now while this isn’t the most humorous show in the world, there are still plenty of laughs to be had, though mostly it as at Sawako’s expense as we see her social missteps occur often or whenever she happens to scare the daylights out of someone that mistakes her for Sadako from The Ring. This means that most of the humor is situational and there are plenty of sight gags as well rather than actual jokes being told. 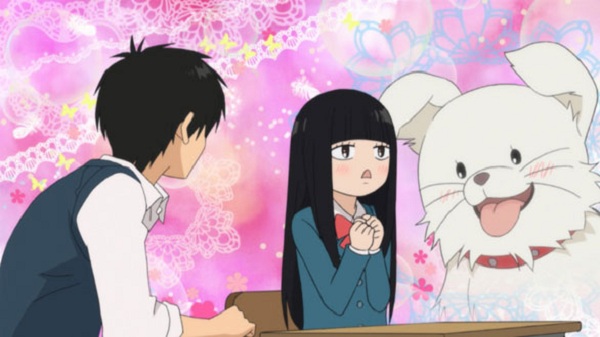 Very few romance shows, even in the shōjo genre, take a realistic look at romance in the world and create understandable and relatable characters. However kimi ni todoke -From Me to You- provides a heartwarming story that avoides the feel of forced drama as we see a simple and slow paced (almost to a fault) story of a girl coming out of her shell and feelings developing between her and Kazehaya. Considering that this is simply volume one, it makes the need to order volume two all the more necessary as viewers who are touched by the story will be eager to see how everything turns out.

Visuals:
To say that the color palette used in kimi ni todoke is soft would be an understatement. Everything shown to the viewer uses very soft colors and beautifully detailed backgrounds to make each scene stand out. That doesn’t mean that there aren’t plenty of visual clichés though as the series tends to display multiple close ups on character’s faces with a pink or similarly romantic backdrop with sparkles or hearts to show whenever a romantic feeling is in the air. 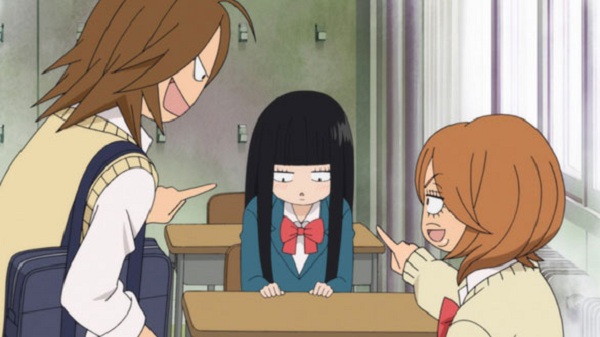 The art style used by Production I.G. focuses heavily on facial expressions to help heighten the atmosphere for any given moment and this is especially true when used for sight gags. The quality of the art is also very consistent with characters having an average amount of detail for their bodies and animation. Also prepare for plenty of chibi transformations for the sight gags, especially when it comes to Sawako, as it happens usually once every few minutes.

Audio & Subtitles:
It is worth noting now that the only language track available for kimi ni todoke -From Me to You- is the Japanese one, meaning that the only way for most people to watch the show is with the English subtitles turned on. The English translations for the subtitles seemed to be quite accurate and unobtrusive to the show itself. 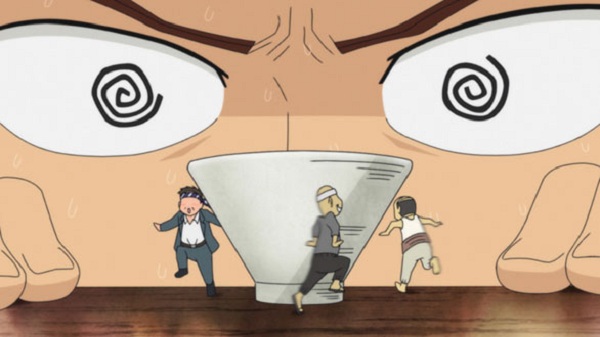 As for the Japanese voice actors we are treated to a rather enjoyable cast of characters, especially with Mamiko Noto performing the role of Sawako. Mamiko’s performance will be one to remember as she delivers Sawako’s personality perfectly which is exactly what one would be looking for in a main character. The opening song is called “kimi ni todoke” by Tomofumi Tanizawa and is rather enjoyable and matches the animation perfectly. The ending song is performed by Chara and is called “Katamoi,” but unfortunately it is likely to be a song that most will skip through as they make their way to the next episode. 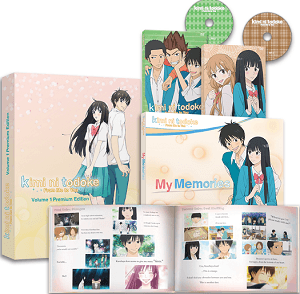 As per standard with any first run release of an anime from NIS America they have released a premium edition version of kimi ni todoke -From Me to You- Volume 1 which contains a few off-disc bonuses. This includes an oversized hard slipcase which features Sawako and Kazehaya on one side and Chizuru, Sawako and Ayane on the other. If you were to display this case, I would say that the artwork for the three girls would be preferable as it displays a heartwarming image of a joyful Sawako. The release comes with two slimpack DVD cases that contains both a DVD and a Blu-ray disc that contains a certain amount of episodes each depending on which version you watch. The only bonus material on disc unfortunately is a clean opening and clean ending song, and while the opening animation is definitely worth a few watches, the ending on the other hand is not.

Also included is a hardcover art book that contains 28 full color pages and is called “My Memories.” For the first two pages the main characters are given a brief summary with some minor spoilers of course but after that the art book takes a unique turn. Being that the art book is called My Memories it is stylized after a scrapbook that displays various screenshots from each episode as well as a few quotes and Sawako’s personal thoughts. Between every few episodes is a scenery collection where some artwork of the backgrounds is displayed. While some may find that this art book is lacking, the art book follows the theme of the anime perfectly. It is as if viewers are able to see how Sawako remembers all of her first experiences as she documents how she is finally coming out of her shell and being sociable.

Overall:
kimi ni todoke -From Me to You- Volume 1 provides a glimpse at a new more relatable type of romance that most anime do not deliver. Of course this may have to do with its shōjo genre so viewers who dislike romance or shōjo will likely want to steer clear of this series. For everyone else however there is plenty to love, especially when it comes to Sawako’s amazing personality. Still, with a story that progresses extremely slow many may grow a bit frustrated with the pacing and wish for something to happen, which is a bit damaging, especially considering this is only half of the first season of kimi ni todoke. As mentioned before this is only volume one so there is still plenty more to see once the viewer finishes this set, and believe me, you will be eagerly waiting for volume 2 once the last episode finishes playing.