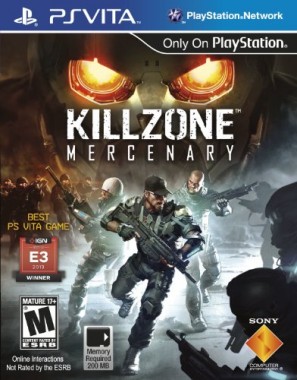 Overview
Since the initial release of Sony’s PlayStation Vita platform in February 2012, one thing has been on the forefront of most mobile gamers’ minds. “With dual joysticks, the platform is ripe for portable shooter games!” Unfortunately, the previous attempts have failed to live up to players’ expectations, leaving everyone feeling like half-baked design was doomed to haunt the portable platform. With Guerrilla’s newest title, hopes have renewed that the platform may indeed be able to support a fully featured first-person shooter experience. How does Killzone: Mercenary hold up? Has it saved the day or did it take the money and run? Let’s find out. 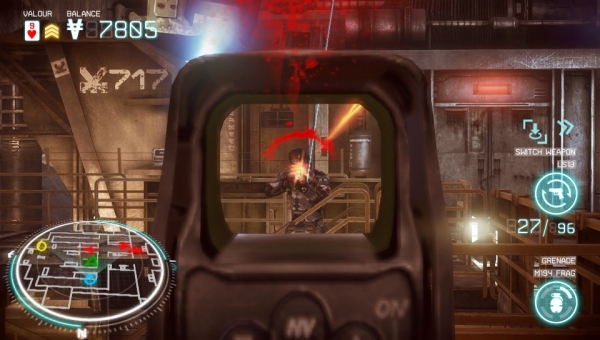 Story
Just after the end of the original Killzone, the ISA and Helghan forces are embroiled in war over the planet Vekta. Gun-for-hire Arran Danner and his squad of mercenaries will take on any mission for the right price, and they’ve been chosen to spearhead the attack on the Helghan homeworld. After a relatively routine mission to extract a Vektan ambassador that goes awry, it becomes apparent that the ambassador’s son could hold the key to victory, and both sides will go to great lengths to get him. With desperation driving each side to greater and greater lengths, Danner begins to wonder if the price of victory is worth the paycheck. 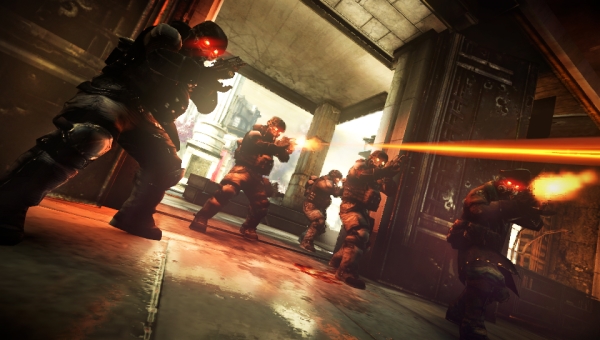 The Helghans want you gone

Gameplay
First thing’s first. For those of you out there who are wondering, “Did they finally do it? Is this the first person shooter we’ve all been waiting for?”, the short answer is a resounding, “Yes.” Killzone: Mercenary isn’t some half-baked quick money mobile games port. This is a deep, rich, fully featured first person shooter that delivers on everything you’d expect from the genre, all wrapped up into a nice package for Vita owners who’ve held on to their system this long.

One of the biggest questions on everyone’s mind is, of course, the game’s controls. Did the good people at Guerrilla manage to squeeze everything down into the portable system? Well, everyone can rest assured Mercenary feels spot on. They’ve managed to really get the feel of a console Killzone game onto the portable with no loss in fidelity or response. You’ll aim and shoot with the shoulder buttons, as you’d expect, and the dual joysticks allow you to maneuver and aim just as well as you would with a Dual Shock. The touch controls are also intuitive and immersive without feeling invasive. It is worth mentioning, though, that folks with larger hands will want to limit their sessions with the game to avoid hand cramping. 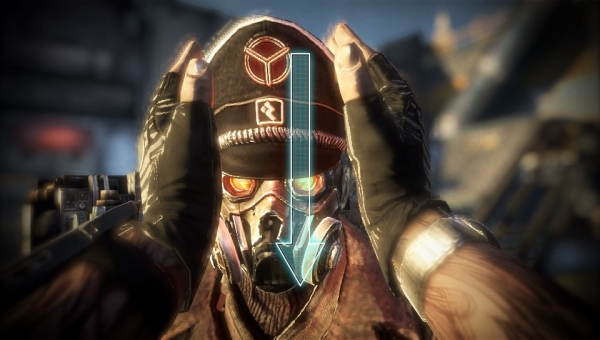 This officer got a little too close

The gameplay itself feels great. You can sprint, slide, take cover, operate turrets, and more. Mercenary carries the same sense of weight and maneuverability fans have come to expect of the franchise. The intense melee kills are back as well, delivering all the brutality you crave, and getting you involved in the process. Anyone who enjoyed the big console releases will still feel right at home here.

The single-player offering for Mercenary is a meaty experience that grows as you play it. There are nine single player missions to work through. Once you complete the basic playthrough of a mission, three separate challenges known as “Contracts” open up for you to play. This brings the total effective mission count up to 36, giving you plenty of hours to enjoy with the game. 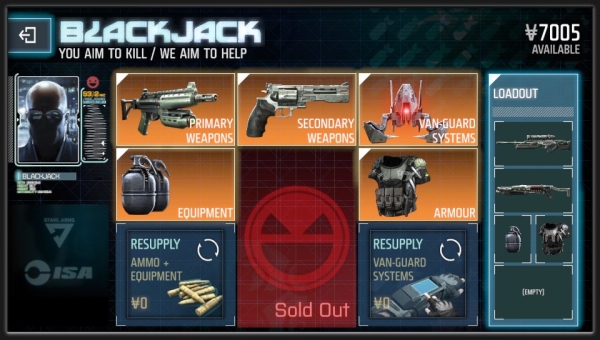 The contracts typically include three different ways to go about a mission. These include “Precision”, “Covert”, and “Demolition.” Each one requires very specific equipment loadouts and contract completion requirements (so many headshots for a precision mission, a certain number of backstabs in the covert mission, or a specific level of destruction for the demolition missions). Each mission will also award you with money to equip your armory.

Given that you take on the role of a mercenary, it’s only appropriate that everything you do is done for money. Mercenary is drenched in ways to reward you for every task you complete. Kill an enemy and get cash. Execute them out with silence, style, or long distance and you’ll be rewarded. If you can take out several quickly you’ll get a cash multiplier. You also get cash rewards for hacking terminals or interrogating officers. Watching your funds climb ever higher provides a fantastic feedback loop that will have you pumped to continue to the next room of baddies. 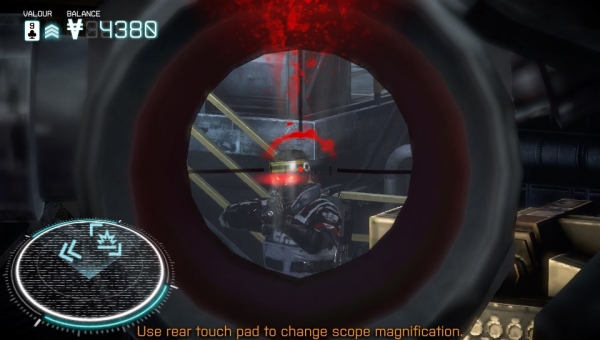 Reach out and touch someone

During your downtime, you’ll get a chance to dive into Blackjack’s wares and build your own custom loadouts. Taking the money you earn, you’ll build yourself up with a variety of rifles, pistols, shotguns, rocket launchers, and more. You can even buy a variety of armor, grenades, and AI systems (called Van Guards) to suit your style, whether assault, assassin, or something in-between. There really is a lot to choose from, and the customization makes spending your hard earned credits feel substantial. It’s great to invest in your character and see how that impacts your experience.

Visuals
Killzone: Mercenary is easily one of the best looking games to be released on the Vita to date. From the first minute, you’ll feel like you’ve been dropped in the middle of a PlayStation 3 game. It’s really impressive to see in motion.

Pound for pound, Mercenary does a great job keeping pace with its console siblings. Environments convey a great sense of the war torn future, with bombed out buildings and thick metal sliding doors everywhere. The Helghan forces still look as menacing as ever with their red, glowing eyes leering at you from behind a great variety of character models. The game even goes above and beyond, utilizing intelligent UI design to accommodate for touch screens. 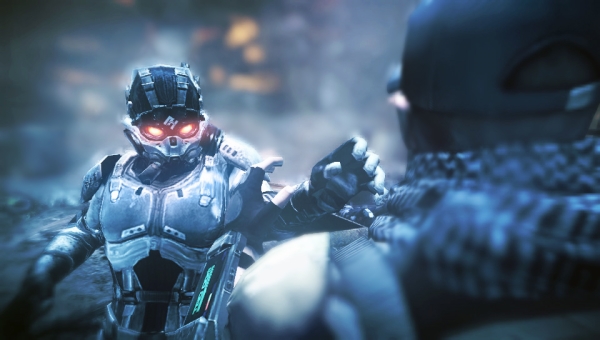 It’s worth noting that, while the game looks wonderful most of the time, hardware limitations had to become a factor at some point. Smoke and fire effects often look lower resolution, which can be quite jarring in such a beautiful world. Everything can also become pretty grainy when a lot of enemies and effects are on the screen at once. It isn’t enough of an issue to stop you from playing, but it can take you out of the experience on occasion.

Audio
The audio design is well done from the ground up. The music fits the atmosphere and drives the action, the voice actors do a great job delivering the story through the eyes of their characters, and the sound effects all carry the appropriate weight and atmosphere with them. You’ll definitely want to make sure your headphones are handy so you never have to miss out.

Overall
Killzone: Mercenary is, without a doubt, the best shooter on the Vita right now. It’s clear that time and care were put into the game by a team of very talented, dedicated people. The game looks incredible and sounds great, the story is well told and has excellent pacing, and the gameplay is solid as a rock. Despite occasional graphical bugs or hand cramping during long sessions, Killzone: Mercenary is well worth the time you’ll put into it. Anyone with a Vita and an itchy trigger finger will undoubtedly want to pick this up.