17 years… it’s been 17 long years since Killer Instinct Gold. Many thought we’d never see another Killer Instinct again, but others held out hope. After Microsoft bought out Rare Ltd. in 2002, its fate became less clear. Then from April of this year, its revival announcement was a mere formality… Microsoft and Fox settled a dispute over the trademark, with the publisher renewing and then proceeding to (finally!) reveal the existence of the Xbox One launch title at their E3 2013 showcase. Now we have our hands on the new Killer Instinct, pulling off combo breakers and ultra-combos like the good ol’ times… but is it just like old times?

At launch, the Killer Instinct: Ultra Edition comes with 6 characters, an exclusive accessory pack for each, Versus, Xbox Live (Ranked and Exhibition), Survival, Dojo and Practice Modes, and Killer Instinct Classic – a port of two arcade versions of the original. In January, Spinal will become available, and in March, Fulgore. Beyond that, there will be a Story Mode released, recreations of classic Killer Instinct costumes, another batch of unique accessory packs and more yet to be confirmed. It’s therefore tough to review this edition when it is practically incomplete, but I have to consider what is on offer now, but also what is in store for us in the future in regards to value for money. Supplementing the listed features above is an extensive KI Store where you spend Killer Points (KP) to unlock all manner of extras, from concept art to skins. 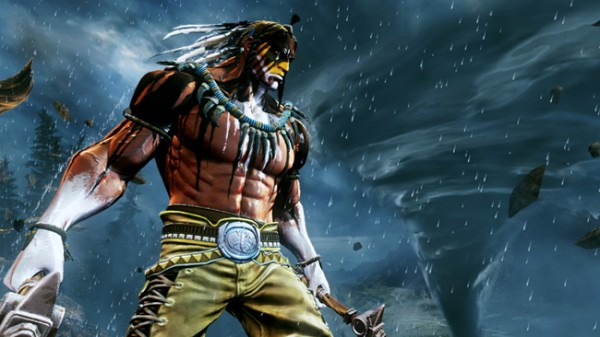 KP are earned by achieving Fight Titles, which are mini-objectives for each character included. For instance, you may earn 50KP for pulling off 3 ultras with Orchid. There are literally hundreds of these building throughout multiple ranks. They can be tracked in the Fight Archive, along with your replays, achievements, fight stats and fight profile. Your fight profile is that customisable banner visible to other players displaying your gamertag, single-player rank and multiplayer rank. The text taunt, icon and background of the profile can be customised to your liking. Dojo Mode is an exhaustive exploration of the basics of the fighting mechanics, all the way to tournament level lessons such as learning how to read light, medium and heavy attacks, and understanding hit boxes and mix-ups.

Dojo Mode is the best way to get acquainted with the game. You can also jump into Practice Mode, set your options – regenerative health on/off, dummy actions, etc – and develop your skills further before heading online. Survival Mode has you take on a seemingly infinite order of enemies, with your meters carrying on between them and a portion of your health regenerating post-fight. Eventually, you will be snuffed out… unless you play on Beginner with Jago, in which case you’ll probably die of boredom first. The gameplay is all about combos. The chain goes like this: opener, auto, linker, auto, ender. This can be extended of course, and true timing-ninjas can supplant manuals into there to make it tougher for their opponent to read and counter. 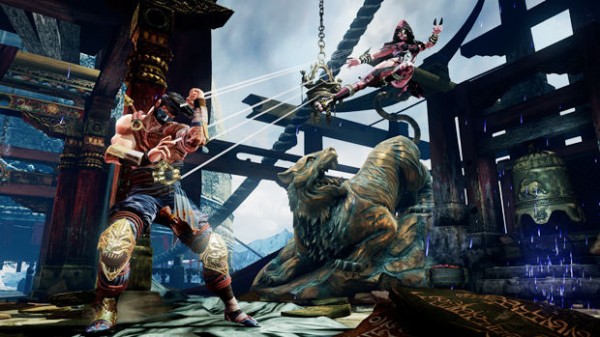 Potential damage builds with each hit, and your combo meter communicates how close you are to dropping a combo, indicating the optimal time to finish it strongly with an ender for maximum damage. Combo breakers are back, as are ultras, although some new mechanics have been added to the system. Counter breakers allow you to counter a combo breaker attempt; shadow counters allow you to counter an attack with a shadow move and instinct mode offers unique properties and abilities when triggered, burning meter as time passes. As for the fighters themselves, Jago – the free starter – is the most well rounded, easy to pick up member of the roster, with a screen-crossing Wind Kick, anti-air Tiger Fury and Endokuken projectile.

When considering Jago is the character used throughout all of Dojo Mode, don’t be surprised if you gravitate towards him more than everyone else at first due to the familiarity. His instinct mode enables regenerative health upon each blow landed. Sabrewulf is the resident rushdown fighter, able to run in with a high Jumping Slash or low Hamstring attack. He can execute double autos which incidentally makes his animations harder to read and easier to drop combos unintentionally. His instinct mode gifts a 20% damage boost. Glacius is the range fighter of the bunch and is thus decidedly difficult to master. His throw is useful in that it creates good distance, and his instinct mode gives him one-hit armor. 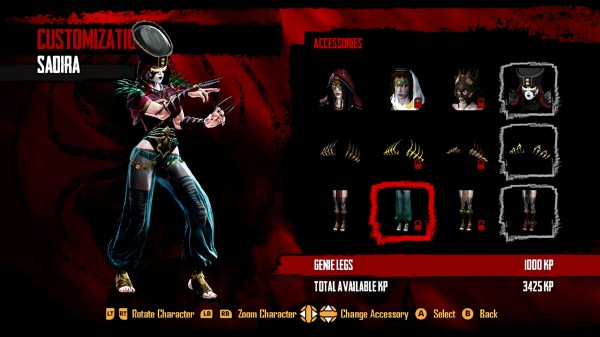 Sadira is the sole brand new character and air-juggler. She has a couple effective launchers and recovers quick after completed animations. Her instinct mode allows the deployment of Web Traps that freeze combos just as they do your opponent. Thunder is a plodding grappler who struggles outside of his extremely close up range. However, when initiating instinct mode, he can double dash substantial distances at a high speed for improved mobility. Finally, Orchid is the second most well-rounded, her arsenal running the gamut. She’s also the single fighter with an air throw that follows up with an automatic floor-bounce. Each fighter has their advantages/disadvantages and although a singular chaining formula applies for all, they each control and play differently, requiring time and effort to truly establish your go-to style and master the appropriate choice.

Killer Instinct is a digital title with AAA-quality, although there are graphical elements that are slightly lacklustre. Character models look good with a certain strong quality to their colouring and the slate of accessories allows some creative mix-and-match customisation. But, ignoring the art style Double Helix has chosen to follow, there is a particular blockiness and blandness to Glacius and Thunder’s stages respectively. Up close, textures are not as detailed as they could be and the terrain’s geometry comes across quite flat and unremarkable. Otherwise, Double Helix’s proprietary Hex Engine can do some very impressive things. 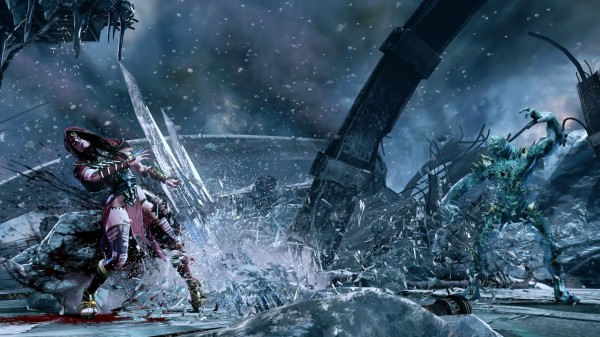 Stages break down and change as the fight wears on, with Jago’s Tiger’s Lair crumbling and a huge storm brewing over Thunder’s Devil’s Landing being prime examples. And leading on from this, artistic and particle effects is where it’s at folks. This is what makes Killer Instinct look next-gen. The shattering ice, the exploding fireballs, the sparks flying all over the place and the individual droplets of rain. They all have physics applied to them as well, so they don’t just disappear after a second, but bounce of the ground and interact with their surroundings. And artistically, the striking shadow move effect and the screen-warping during a combo-breaker add to the perceived force and gravity of these epic encounters.

Australian composer and sound designer Mick Gordon is a self-confessed Killer Instinct superfan, so when he got the offer to work on his dream project, there was no way conceivable way he would pass that up. His top priority in creating the music for this new Killer Instinct was to pay homage to Robin Beanland and Graeme Norgate’s work on the former, iconic entries, whilst bringing its sonic landscape out of the 90’s and into the modern era. And he has done just that. His love for the series is proven at every turn. The main theme is built upon a shortened section of the original drum beat, but maintaining the signature melody. The select screen music is the most preserved, although it’s also the most simple being a 4-bar loop. Mick made some really inspired choices for the stage themes as well, such as learning Tibetan throat singing and incorporating that into Jago’s ‘Tiger’s Lair’ theme. 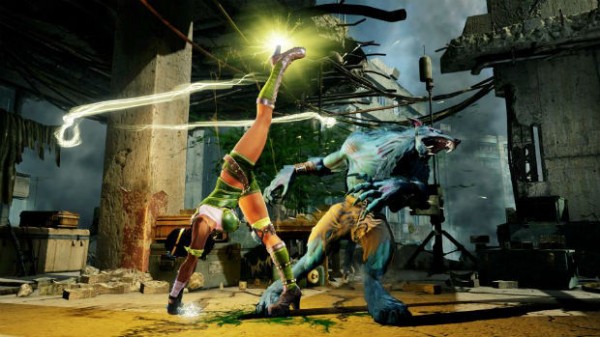 Thunder’s ‘Devil’s Landing’ theme features live recorded Native American chants and is more respectful to the culture of the character than his past incarnation. Glacius’ ‘Crash Site’ theme communicates the new focus on his honorable side well with a hint of “To Galaxy” from Halo 4. Sabrewulf’s ‘Alchemical Lab theme is described by Mick as if the beast himself was ripping apart an orchestra as they struggle to keep playing, and the erratic Frankenstein-esque strings certainly reflect that. Sadira’s ‘Assassin’s Cave’ is metal-heavy, with bends that would make Alice in Chains jealous. And finally, Orchid’s ‘Rebel Outpost’ is a pop/dance track – in the vain of the original – although it brings a harder, less sexist edge to the messaging replacing the lyrics “touch me, feel me” with “touch me and I’ll break your face!”

There’s also a little aural secret hidden within each piece that hardcore fans will appreciate. Each track could stand on its own as a unique listening experience, with a little tightening of course, and hopefully a Killer Cuts album is on its way. The in-game versions adapt to the pace of the matchup and Ultras have a musical element to them – a unique beat for each that adopts the soundscape of the level they are performed on. All of the music from Killer Instinct 1 & 2 can also be unlocked and switched to in Practice Mode, which is a neat inclusion. There’s also a second announcer that can be unlocked and it’s a doozy: Chris Sutherland, the original voice of the franchise! As you can tell, there’s a lot to the audio which is a big part of Killer Instinct‘s DNA, and respect is the key word here; perfectly treated by all involved.

Killer Instinct is a smart, technical fighter that is entirely respectful and inspired by the prior games, smoothly bringing the franchise into a new era. The fast combo-focused combat, the characterisations, the music and the tone have all been expertly tweaked for a different time. The only downside at this moment is the immediate overall lack of content, however the great thing about the pricing and release scheme is you decide how much you want to invest. Personally, with the low-floor/high-ceiling gameplay, the plethora of unlockables, constant player rewards and promise of Spinal, Fulgore, a Story Mode, classic costumes, accessory packs and more, the Ultra Edition is well worth it. ULLLTRRAAAAAAAAAAAA!