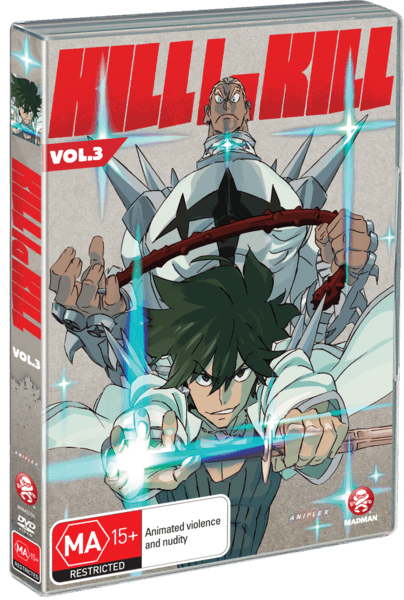 This volume takes us past the halfway point of the series. The action, the sheer insanity and every other aspect of it have all remained consistent so far, for better or worse. Some episodes have been better than others, but the creative team always manages to find some way to make every episode entertaining. This volume promises more violent action that the previous volumes, so do these five episodes maintain the same level of quality of the previous nine episodes, or is the action unnecessarily violent and over-the-top?

After defeating Ira Gamagoori in the first battle of the final round of the First Naturals Election, Ryuko is now up against Houka Inumuta. Using his skills of data collection and analysis, he is able to dodge many of Ryuko’s attacks. Comparatively, this battle seems to be over far quicker than all the other matches, but it becomes clear that this fight did not take place so Inumuta could defeat Ryuko, but rather so he could gather more data about her fighting abilities for future reference. She then immediately faces Nonon Jakuzure, who uses the power of sound to overpower Ryuko and leave her and Senketsu unable to focus on formulating a plan to defeat Jakuzure. Ryuko then gains the power of flight and takes off like a rocket, eventually winning by using Jakuzure’s own power against her. Uzu Sanageyama is the last member standing of the Elite Four; the other three members are now sitting rather intimidatingly next to the hyper-energetic Mako Mankanshoku. 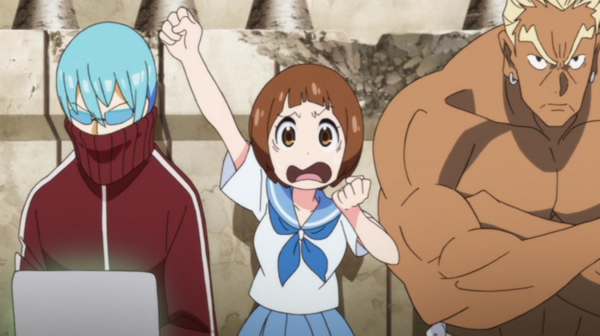 As the final battle is about to begin, a new character who had previously only been shown during a few brief shots is introduced. This person turns out to not only be an enemy to Ryuko, but an annoyance to Lady Satsuki as well. Her name is Nui Harime, and she possesses the ability to de-thread a Goku uniform without even breaking a sweat. Although Ryuko does not realise who she is at first glance, Harime wields the other half of the scissor blade and reveals to Ryuko that she was the person who murdered her father. Unable to control her rage, Ryuko continues to fight to such an extreme level that she loses almost all of her blood, essentially becoming a zombie as a result. She continues fighting, but is unable to formulate a strategy to defeat her father’s murderer. The best points in the series are not where there is relentless action and violence, but where the other side of Ryuko appears, the side that views Mako as a friend and part of her will to fight. This can be observed in the scene in which Mako brings her back to her senses. Following the conclusion of the battle, Satsuki reveals her ulterior motive for holding the First Naturals Election, and we then see Honnouji Academy’s finest soldiers taking over the Kansai region, all while Ryuko faces a serious dilemma of her own. 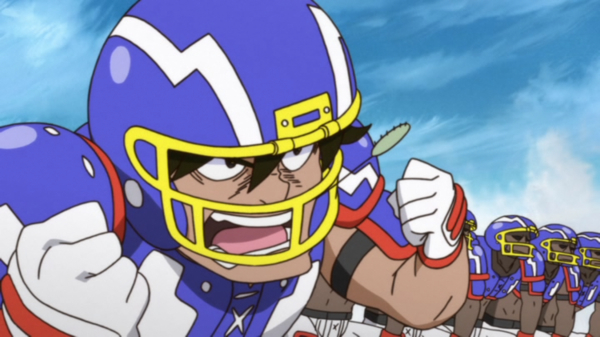 The visuals are still consistent, and the animation is fluid even during the most fast-paced action scenes these episodes have to offer. There is an slightly increased reliance on still frames, though, suggesting that there may have been production issues caused by a low budget or time constraints. However, given the insanity of the show, it could just as easily be an intentional stylistic choice.

Female sexualisation is still prominent and frequently thrust right into the viewer’s face. There is some ‘equal opportunity’ ‘fan-service’ with the male transformation sequences, which still continue to be censored by the sourceless ray of light that fans of ecchi anime will be familiar with, but this does not make the objectification of the female characters acceptable. The male nudity raises questions about what is and is not morally acceptable at Honnouji Academy and the surrounding district; Ryuko’s teacher Aikuro Mikisugi again displays his nipples, which inexplicably produce a bright purple light. Also, Ira Gamagoori is almost completely naked next to Mako following his defeat in the First Naturals Election. Houka Inumuta, a fellow member of the Elite Four, gets told off by Gamagoori for wearing a tracksuit, because this show does not often like making any sense. 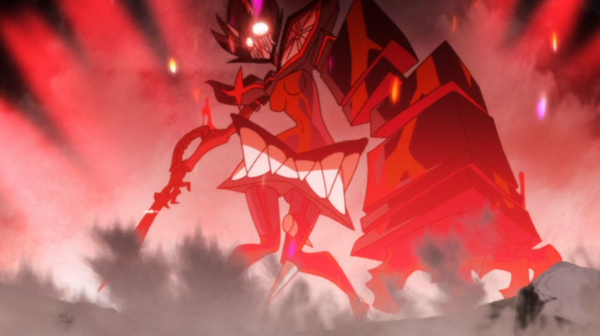 The violence in these five episodes is ramped up to a new level; copious amounts of blood spurt out of Ryuko’s body in what would realistically be a long enough period of time to render her dead. The choice to depict Ryuko as a zombie during this period of time is interesting, and may be an accurate representation of her mental state at the time. Fans of the slapstick violence seen so far in the series will likely find Mako’s method of bringing Ryuko back to her senses quite hilarious, if not completely over-the-top.

The audio remains as excellent as ever in these five episodes. The high-quality background music by Hiroyuki Sawano continues to be put to good use, although some pieces of music are used far more than others. Certain pieces are only used once throughout this entire volume. Any fans who have been having trouble deciding whether or not to pick up the CD soundtrack may want to get it while it is still available after watching this volume. 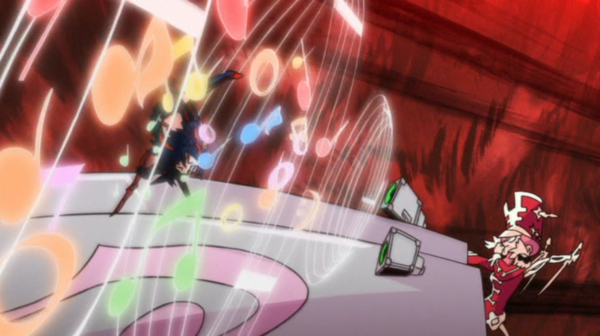 The voice-acting is also consistently good; minor characters and main characters alike are cast perfectly. There are, however, two negative things to note about the English dub. The names of character names and Japanese locations are horribly mispronounced, especially Mako Mankanshoku’s name, and many characters use more coarse language than they have previously.

The textless opening and ending animation sequences are included on this disc. 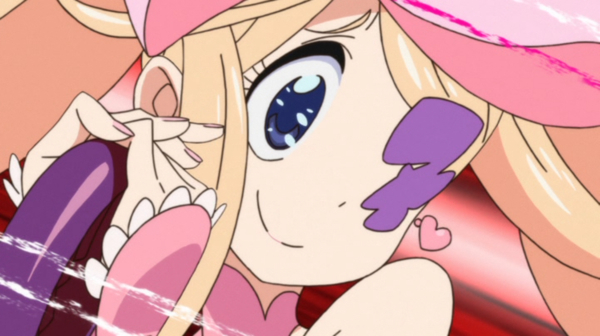 The episodes featured in this volume of Kill la Kill continue to entertain with the same level of action, bad-mouthing, drama, comedy and sheer craziness that has been the norm thus far. The insane and impossible amounts of blood shown in one episode in particular may put off some people from deciding to watch this series, as might the increased amount of swearing. For those of you who have been watching since episode 1, however, this volume will provide you with two hours of enjoyable entertainment.