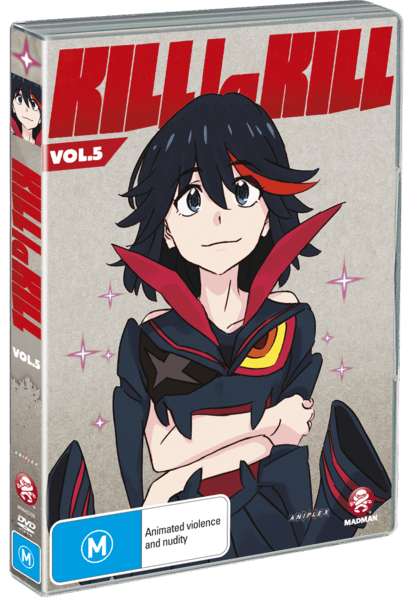 The majority of the episodes included in the previous volume of Kill la Kill took the series to new extremes. Those episodes featured extremely disturbing scenes that unapologetically featured and glorified incest and sexual abuse. The levels of violence were higher than ever before, Now, the final volume of episodes has been released. With five episodes and one OVA, does Trigger manage to end this series in a memorable way?

Ryuko has learned about her origins. Being someone that is neither human nor clothing, she is struggling to come to terms with who she is and who she was. Due to this change, Ryuko refuses to listen to the words of anyone who tries to help her, even her hyperactive and ‘crazy’ friend Mako Mankanshoku and her Kamui Senketsu. Ryuko then decides to leave everyone behind and go off on her own. Bent solely on getting revenge on her evil mother Ragyo Kiryuin, she walks right into a trap by heading to Honnouji Academy. Nudist Beach has to focus their efforts on rescuing Satsuki after discovering that she is being held captive by Ragyo. 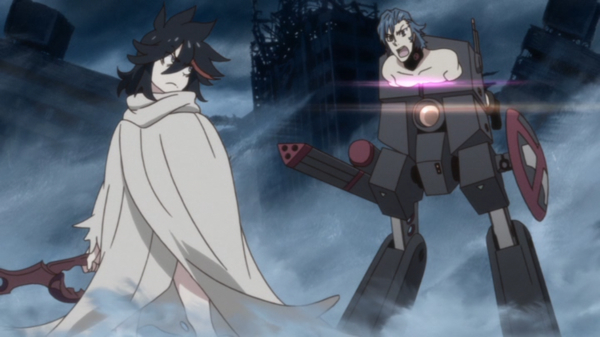 Ragyo forces Ryuko to wear the Kamui Junketsu and brainwashes her to give her false memories. Believing that Ragyo was a good mother and was always there for her, Ryuko joins her new ‘allies’ Ragyo and Nui and finds a new goal in killing her sister Satsuki. Now that Ryuko is more powerful than ever before, Nudist Beach must now work together as a team in order to execute Satsuki’s secret plan to strip Junketsu off of Ryuko. Even Mako helps out under the careful direction of Satsuki, and the team follows every step of the plan perfectly. Through their actions, it is shown just what can be achieved when people work together. Eventually, Ryuko recovers from being brainwashed and takes Junketsu off despite the enormous strain that doing so will put on her body. Remembering that Nui Harime is her enemy, she formulates and executes a plan to deal Nui a crippling blow. Nudist Beach now has a moment’s reprieve. Everyone joins together to share a meal together, but the conflict between the two sisters Ryuko and Satsuki has not yet been resolved.

Through the Elite Four’s devotion to Satsuki, Ryuko realises that she needs to carefully consider who her real friends and allies are and who her real enemies are. No matter how crazy her friends may be, they are still her friends and they are the ones who genuinely care about her and love her. She has acknowledged this truth and come to terms with who she is, so she is now ready to join Satsuki and fight Ragyo. 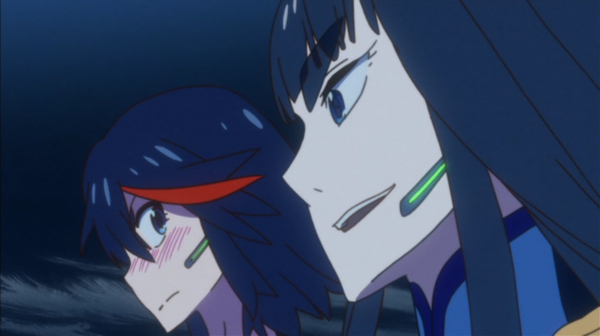 After four volumes, Kill la Kill finally manages to make meaningful points not only about clothing, but also about adolescence, friendship and teamwork as well. Its “you wanna get naked?” comments, as well-timed as they may be, are not helping to make any point about clothing. What does help make a point is the extreme lengths to which the employees of Revocs go to serve the Life Fibers. The term ‘fashion-slave’ has been around for a while, and but rarely has this term been explored to such extremes. Revocs’ employees offer themselves up to the clothing in order to help it completely take over Earth and wipe out humanity. This can be compared to the lengths in which some people go to for fashion, although Kill la Kill does not make even a single point about how the media is one of the major reasons why women feel the need to wear clothing that is unnecessarily revealing and often ill-fitting to the point of being physically uncomfortable to wear. On a final note, Trigger does not make it clear whether or not Mako has any romantic feelings for Ryuko. It is possible that, somewhere in that hyperactive brain of hers, there exists some deeper feelings for Ryuko. Trigger evidently has no intention of making everything clear to the viewers. To paraphrase Ryuko, nonsense is how they roll, and that is not necessarily a bad thing. 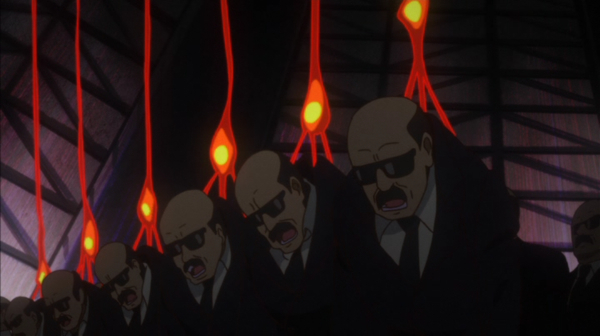 The visuals are as high-octane and crazy as ever. The animation continues to frequently shift from being fluid to purposely limited, even combining the two alternatives in the same frames as if to draw even more attention to how crazy the series is. There is a lot of full nudity in this volume, but genitals and female nipples are not drawn, with the exception of Mako’s younger brother. The reason why Aikuro’s nipples emanate a bright purple light remains unexplained. There is also a lot of blood and gore in this volume, with copious amounts of blood frequently spurting from various characters. This is something to consider if you have not yet started watching this series, but for those of you who have been following the series so far, this may not be a problem at all. 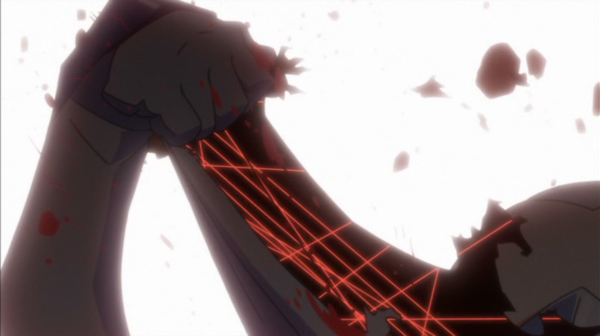 Hiroyuki Sawano’s music is used effectively throughout these episodes. As fantastic as always, it is used at the right times, as is musical silence. The voice acting is excellent, but the one thing that continually brings the English dub down is the incorrect pronunciation of the names of most characters, especially Mako Mankanshoku’s name. In some cases, English voice actors are better suited to their roles than the original Japanese seiyuu are. This can be found with Ryuko, Satsuki, Aikuro and Senketsu’s voice actors for example. The English dub script has clearly been adapted from the translation, but it is effective overall. Ragyo makes one good point, though, which is that Ryuko does not speak like a normal 17-year-old.

This volume features a few on-disc extras, the majority of which are not listed on the back cover of this release. The 30-second web version previews are again listed as being included on this disc despite not actually being present. The previews in the extras menu are the same 15-second previews that appear at the end of each episode. The extras that are included are the textless animation sequence for the second opening and ending songs, the textless ending animation sequence from episode 24, the OVA episode 25 and a recap of the story narrated by Aikuro Mikisugi. The latter is in Japanese with English subtitles only and does not feature any new animation, but it is entertaining. 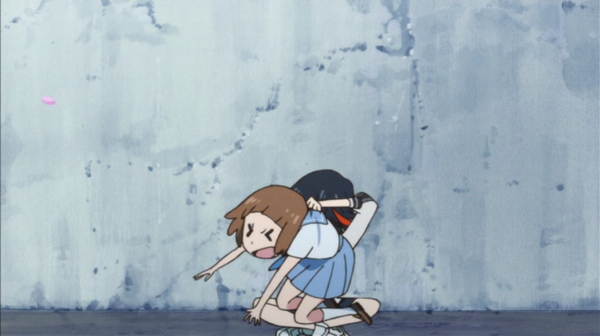 The final four episodes and the OVA episode of Kill la Kill end the series on a relatively high note. Through the very well-executed combination of comedy and drama, these episodes provide a random and crazy yet highly entertaining experience. The comic relief hits all the right notes and is used at all the right times in this volume. There is another problematic scene glorifying incest in an episode featured in this volume, but Trigger does not take things to the uncomfortable extremes that they previously have. The scenes depicting the series’ traditionally high levels of blood and gore are frequent yet never gratuitous, owing to how utterly ridiculous they are and to the fact that the enemies are often the ones sustaining the attacks. If the evil depicted in the episodes included in volume four does not bother you, then consider picking up this volume along with the rest of the series and joining Ryuko on her quest to avenge her father’s death. If you have already collected the first four volumes, then get this volume and complete your collection. Kill la Kill is one of the most unique anime series to be produced in recent years.