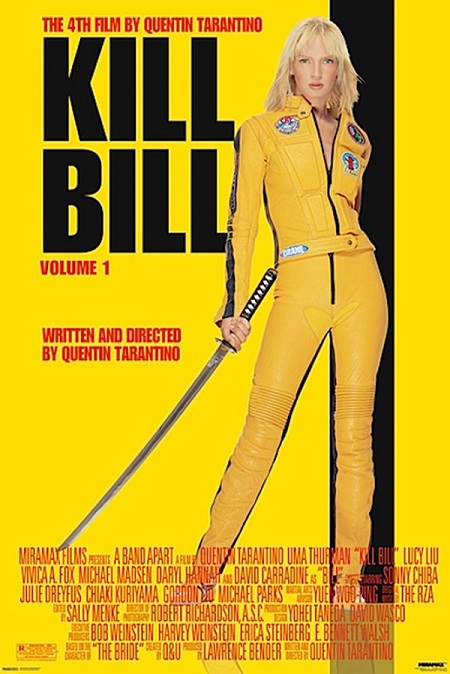 I’ve long been a fan of Quentin Tarantino’s work and I find his work to be quite enjoyable. I remember watching the Kill Bill films some time ago and fell in love with it’s pastiche of so many different film genres and styles. It should not come as a surprise to anyone that Tarantino is a huge film geek since it clearly shows in his work. In preparation for the In the House double screening of the two films, I sharped my katana to a killing edge and rode on down to George street cinemas.

Our hosts for the evening were David ‘Quinny’ Quinn and Jill Wall who opened up the proceedings, in typical In the House fashion, with a game of scissors, paper, kung fu. After this lively game, they sat down to speak a bit about the films that we were about to watch. A point Quinny mentioned which stuck with me was that Tarantino had said no music was featured in these films which had not been in another film before. I find that particularly because it speaks to a certain quality of Tarantino’s films whereby they draw upon a shared knowledge of film genre and play with them to great effect. 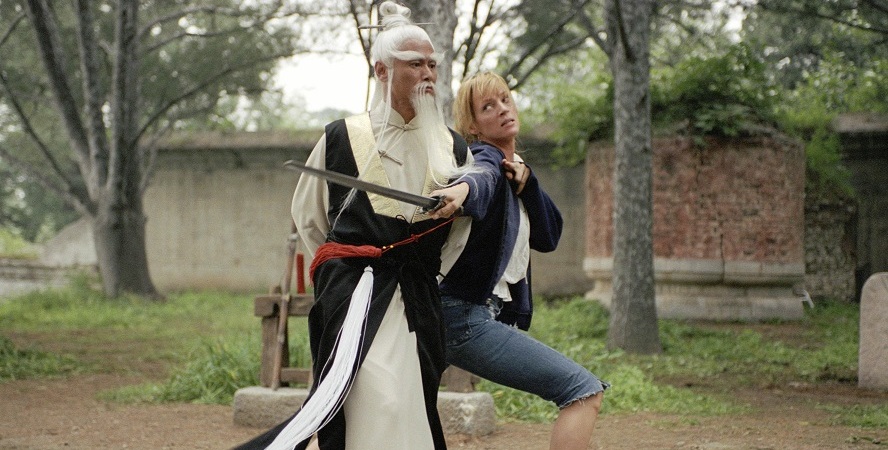 The narrative of these two films is fairly simple: The Bride (Uma Thurman) is on a quest for revenge against a team of assassins lead by the cruel and eponymous Bill (David Carradine) who attacked her during a wedding ceremony. She, of course, survived their attempted murder but suffers injuries which make her lose her child and put her into a coma for four years. Motivated purely out a desire for revenge against her former comrades in the name of the wrongs done to her, she goes on a murderous rampage which involves travelling the world, obtaining legendary samurai swords, and participating in ultra-violent but visually stunning fight sequences. We understand that, although her destination might be quite straightforward, it’s the journey and the obstacles that she has to overcome which keep you captivated. 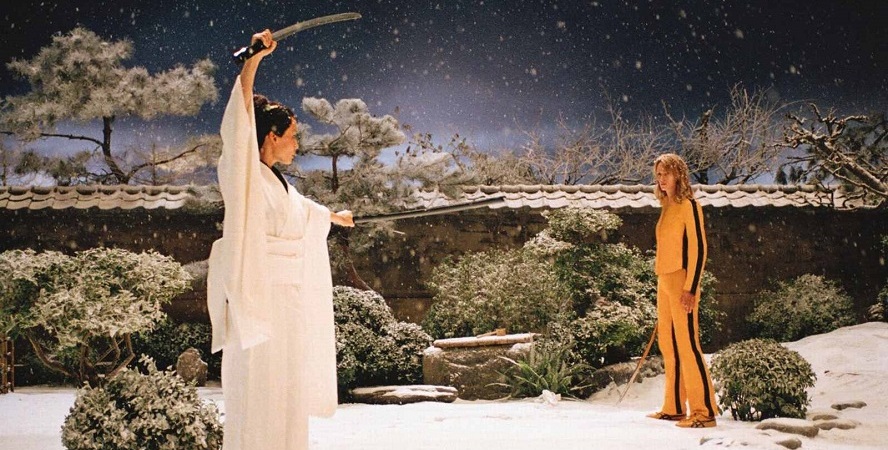 I am in two minds about Tarantino as a screenwriter. On the one hand, I appreciate that he is a master of naturalistic dialogue which both feels grounded in the everyday but is still quite humorous and we see it here on display. The way he pulls this off seems almost effortless but it something which so many screenwriters repeatedly fall at the hurdle of. On the other hand, this same dialogue can really kill the mood when used out of context for a character. This is also on display, somewhat, with the film’s climax and the build up leading up to it. When the final confrontation with Bill happens, my companion and I for the screening felt that it was undercut a bit Tarantino’s signature dialogue. Instead of a faceless and near mythical villain, we end up with an underwhelming cowboy who likes to think about comics.

Thurman carries the role of the bride with equal parts grit, determination and vulnerability. Throughout the film, we can see, feel, and believe that she’s on a single-minded quest for vengeance. This is especially important since for most of the runtime, all we know about her character is that she’s out to kill a bunch of people. With Thurman’s performance we feel every kick and punch that’s both given and received alongside the vindication that comes when she finally gets at one of her chosen targets. What we see of her before her homicidal quest also makes for interesting character development as we see the drastic change of a cold blooded killer who finds out that they are pregnant. 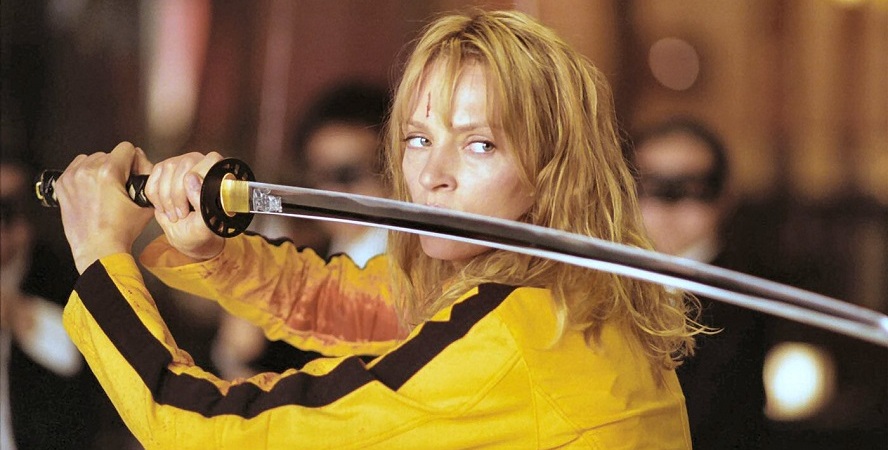 In terms of the rest of the cast, pretty much everyone puts in a solid performance in the ensemble. Truth be told, there isn’t too much to explore with the characters outside of their origin story and current situation so the actors pretty worked with what they had and turn things up to 11. Lucy Liu does particularly well as the proud O-Ren Ishi and gives the role plays the role with both restraint and abandon. Daryl Hannah as Elle Driver does a good turn as a nemesis to the Bride and she gives the limited character a distinct presence which, if not memorable, is at least recognisable. Michael Madsen is similarly engaging as the contemplative Budd, but besides delivering his lines in a cool way, there really wasn’t much more I could tell you about his character.

Two of the real showstoppers in this ensemble, however, were Chiaki Kuriyama and Gordon Liu. The characters they play, Gogo Yubari and Master Pai Mei respectively, were bit roles but were without a doubt some of the most memorable parts of the film. Kuriyama’s Gogo is all kinds of creepy and crazy and she absolutely sells it as this homicidal yet demure psychopath. Liu’s Pai Mei hits the mark with what most people imagine a kung fu master to be with capricious cruelty and snide humour. His exaggerated movements and mannerisms are what make Pai stay with you after the film’s run time. 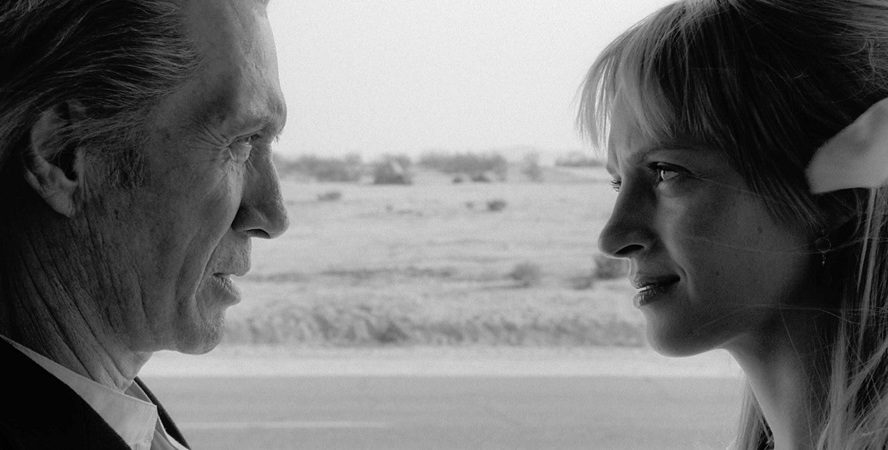 This film is pretty much a showcase of Tarantino playing with film. The first volume especially takes to playing with the cinematic styles of traditional American grindhouse, Japanese Western, Japanese anime, and of course samurai films. Where the sections meet and crossover is quite clearly delineated and you become hyperaware of the fact that you are watching a film. For some, this may break your immersion but for me, I found no difficulty in pretty much just jumping right back in.

The action sequences are expertly made to be bother entertaining and beautiful in it’s own macabre fashion. Tarantino uses gore almost as much as Raimi does in the Evil Dead series but whereas Raimi uses it for comedy, Tarantino uses violence the same way an artist uses paint. He lays out a scene of bloody carnage and finds the beauty in even the most macabre and bloodthirsty scenario. 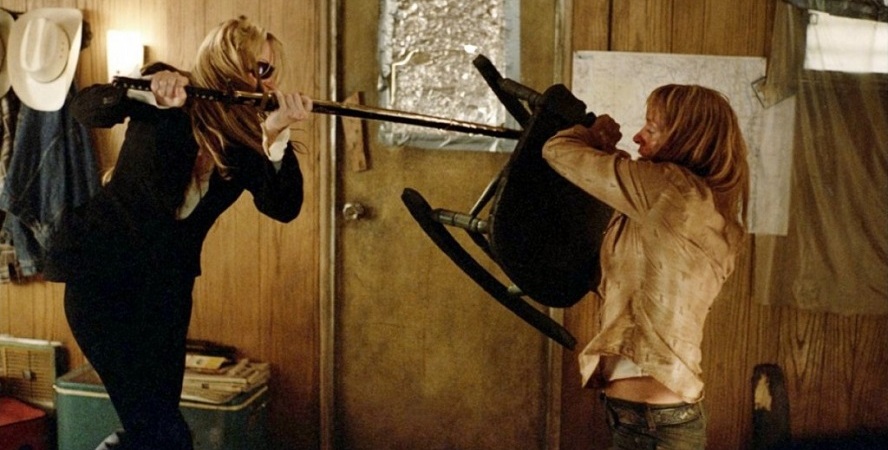 Tarantino is a master of combining film and music together in innovative pastiches which are a heady mix of contemporary and classical genre soundtracks. The soundtrack features a range of items including everything from orchestral pieces to 70s pop and even a Spanish guitar number which sounds like it belongs in a Western. None of it might be making their debut in a film but they are certainly given new life by this film.

There is pretty much no point in time where the film’s sound design has been left to its own devices and you feel as though even single sound and moment you hear has had effort put in and applied to it. Even in moments of relative silence, we are made hyper aware of the film’s sound design with just subtle tones and sound effects. If you are interested in how distinct and effective sound design in a film can be, the Kill Bill films are a masterclass. 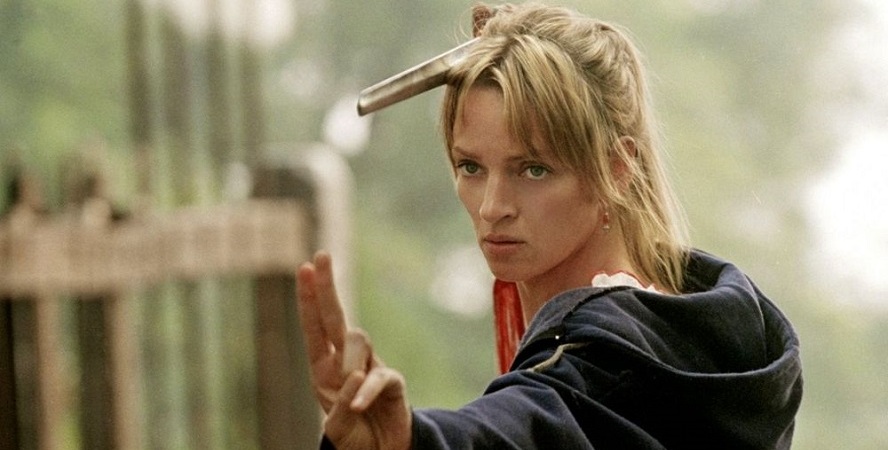 Overall, I found a lot to love about these films and had a great time during the screening. The characters, writing, and performances was almost consistently quite good albeit with one noticeable exception. The visual direction and action sequences were expertly crafted with an eye for the beauty of violence. The film’s sound design is similarly composed to not just match and accentuate the film’s images but rather to serve as a further element of the film’s experience which is no less integral. It was a different experience to finally see these films up on the big screen and I am sure Tarantino would agree that it would be the only correct way anyone should ever see any of his films.

Kudos to In the House for screening these two cult classics!

The Kill Bill films are expertly crafted under the careful attention of a true, undisputed auteur to create a true cinematic epic.
9