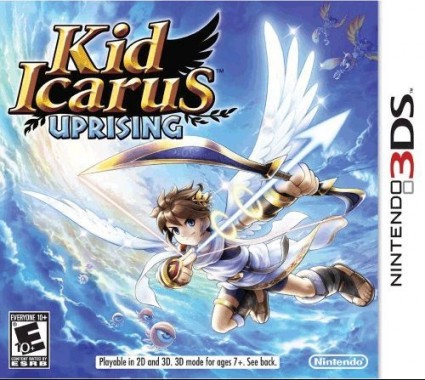 Overview:
It has been 25 years since Kid Icarus was released on the Nintendo Entertainment System. A quarter century later the franchise has finally, FINALLY, been given the continuation it always deserved. In that entire 25 year span since the series conception there have been 3 Kid Icarus titles, including Uprising. The second of which was a Game Boy game that has mostly been forgotten in the annals of time.

So why after so long did Nintendo decide to revive what was essentially a dead franchise? Well it all traces back to Smash Bros. Brawl for the Nintendo Wii. When deciding the character roster for the game, Nintendo decided to include Pit, the protagonist of Kid Icarus. Defying all expectations, Pit became a fan favourite character and amongst the most played characters online (overshadowing even special guest characters such as Solid Snake). The fans wanted more of Pit, they wanted more of Kid Icarus. Nintendo gave them what they wanted, and then some.

Kid Icarus: Uprising is more than any fan could’ve asked for. It is to Kid Icarus, what Metroid: Prime was to Metroid. It has taken all the elements fans loved about the original and took it to a whole other level. Pit is most certainly back and thank the gods for that. 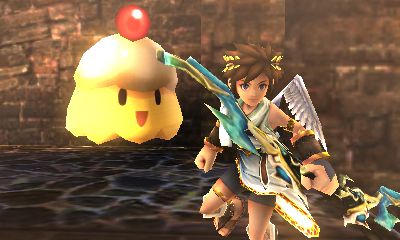 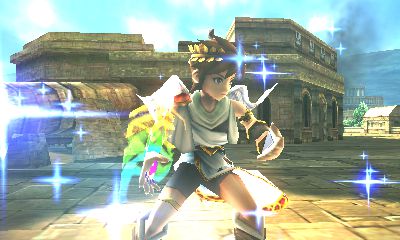 Story:
Nintendo have shown in the past that they are quite capable of telling deep stories in their games through multiple different methods. Kid Icarus: Uprising is possibly their most admirable story effort to date. Like Starfox Adventures and The Legend of Zelda: Skyward Sword before it, Kid Icarus: Uprising features a complex plot, a strong cast and a remarkably deep mythology underneath it all.

Pit proves himself to be a worthy hero in his own right, but more so an interesting hero. A large portion of the plot revolves around the question of whether or not Pit’s actions are justified. Is he right in killing these creatures, because he deems them evil? Or is he the one who is evil in the eyes of the creatures? This is further amplified once Pit’s dark self is brought to life. Pit’s dark self, named Pittoo, beckons Pit to realise his darker side, to embrace that his actions will never be good in the eyes of everyone. When it comes to war, everyone is wrong.

Honestly I was shocked at the level of depth and profound meaning of this game’s plot. I expected something far more simple, what I got was instead yet another further push from Nintendo to express a message in their games. I was definitely reminded of the whole ‘animal cruelty’ plotline from Pokemon: Black and White. It’s certainly an interesting direction Nintendo have been taking and I must say that I found Kid Icarus: Uprising as mentally stimulating as much as it was pure enjoyment, striking a unique balance that Nintendo needs to keep implementing moving forward. 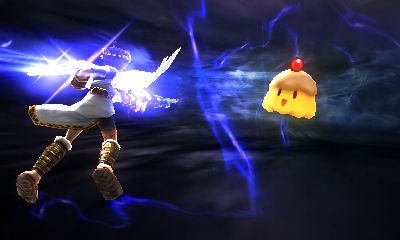 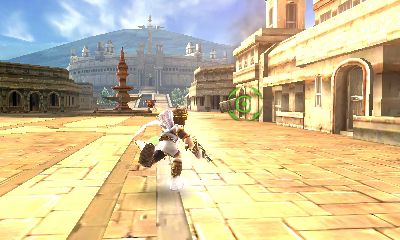 Gameplay:
It’s hard to discredit the Nintendo seal of approval. They have made a name for themselves that has transcended the industry itself. Everyone knows Nintendo and seeing that name tagged on the case of a game is usually all that is needed to let people know that it’s a quality title. They have just built up that mind share with quality title after quality title. Kid Icarus: Uprising is no different.

Uprising marks yet another in a long line of brilliant Nintendo games. The game implements a unique yet incredibly addictive formula that truly feels fresh amongst the plethora of rehashes and remakes that have flooded the market as of late.

The game has a lot on offer for players. With Solo, Multipler and Training modes  there is a lot to see and do. The Solo mode is where you will play through the story mode, collect different gear (usable in Multiplayer), customize said gear and receive accomplishments throughout the mode.

Jumping into this mode first of all I found it a little jarring at first. The control scheme is without a doubt a unique one and has a rather steep learning curve. While playing through the Solo mode, you will pick up on it pretty quickly though, but this could be a deterrent for those looking for something familiar. It’s anything but familiar, but it plays excellently if you can wrap your head around it. 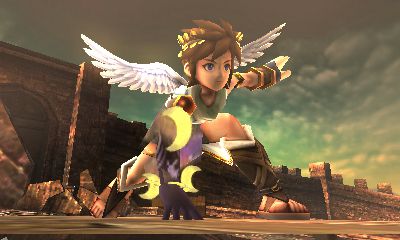 As for the story mode itself, each level follows the same structure, a flying portion followed by a land portion and then ending with a boss battle. In the hands of a lesser developer this could become repetitive and tiresome, however here it is absolutely addictive and flat out fun. The level designs are each unique and a pleasure to explore, especially when backed by the interesting plot and character banter that overlays the experience.

For those concerned that the story mode would be short, fear not it is as a matter of fact incredibly long. There is a great deal to do and see and the plot just continues to get thicker and thicker as you go on and when you think it’s over, think again.

The Multiplayer mode is a rather enjoyable little mode, that could do with a few more match types, but the two it has are good enough to keep players enthused for quite some time. There is the Light vs. Dark match type, which is essentially a Team Deathmatch type mode, pitting (no pun intended) teams of players against one another for an allotted period of time with players eventually becoming Light or Dark Pit, who must then be killed in order to win the battle. It plays well enough, and the arenas are each creative and distinctive. My only qualm against this mode is that the inclusion of the Light and Dark Pit was a little unnecessary for what should just be a straight up Team Deathmatch. There is also a Free for All match type which is pretty much the same thing except you can kill anyone. I found this match type to be more enjoyable as the pacing was faster and much more simplified.

Finally, we have Training mode which is an enjoyable little playhouse for players to test out their weapons. It does it’s job, but could’ve used a bit more variety in enemy interaction.

All in all, Kid Icarus: Uprising is a bona fide quality game. If there was ever a reason to own a 3DS here it is. This game is pure enjoyment and is the game to own on the Nintendo 3DS. 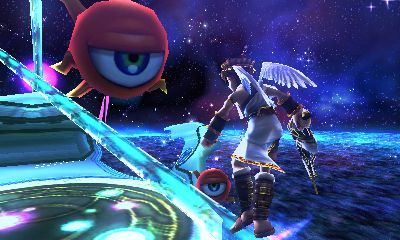 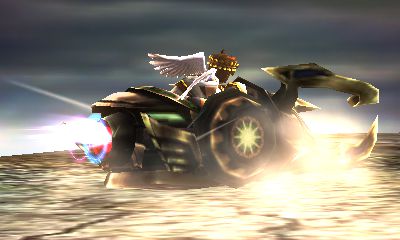 Visuals and Audio:
For a 3DS title, Kid Icarus: Uprising does not disappoint at all aesthetically or aurally. It’s amazing to see how far handheld gaming has come and Kid Icarus: Uprising is a beauty to behold, with visuals superior to the majority of Nintendo Wii titles. The environments, character models and effects are gorgeous and really compliment the presence of Gods and Goddesses in the game. Visually it is one of the best the 3DS has to offer, second only to Resident Evil: Revelations (which looks Xbox 360 quality). Unfortunately however the 3D effect does not add much to the experience and actually becomes somewhat distracting during long playthroughs.

Aurally the game’s soundtrack and voice acting go above and beyond the call. This is not just your average voice work, this is career defining voice acting, with Antony Del Rio deservedly earning a shout out for his amazing portrayal of Pit. He perfectly conveys the moral compass as well as inner conflict that comprises Pit and carries a lot of the story on his shoulders. The soundtrack itself is beautifully orchestrated and harkens back memories of that little game on the NES 25 years ago. That little game that has finally gotten the encore it’s fans always wanted. 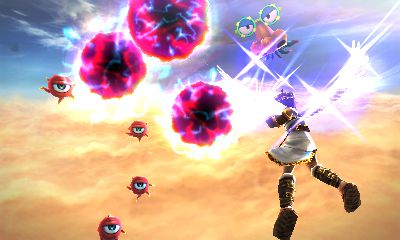 Overall:
Kid Icarus: Uprising is a remarkable game that not unlike Metroid: Prime before it, takes a beloved 2D game and turns it into something special. Something that does not come along everyday. It’s something that so many companies couldn’t do when the 3D wave hit and that is to successfully transfer the feeling of the 2D game into the 3D realm and push it beyond all expectations.

The game itself is a revelation. It’s fresh, exciting and above all a lot of fun. It’s been a long time coming for Kid Icarus fans and it’s my pleasure to say that this game has taken the Kid Icarus franchise to the next level. This is the game to have if you are a 3DS owner. Nintendo needn’t leave luck to the heavens with this one, as they have a massive hit on their hands. After 25 long years, Pit and the Goddess of Light have finally, and I mean FINALLY, taken flight.