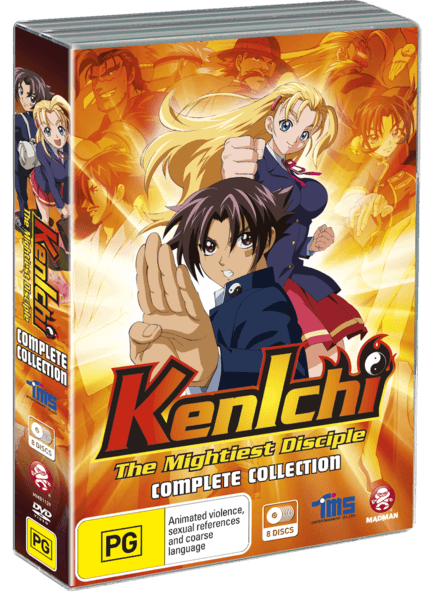 Overview
Everyone wants to be stronger. Whether to fight enemies or protect friends, people strive for power. It’s a fact of life. People are judged and grouped on their abilities, interests and demeanour. So what happens when a coward breaks that system? What will it take for him to become the Mightiest Disciple? 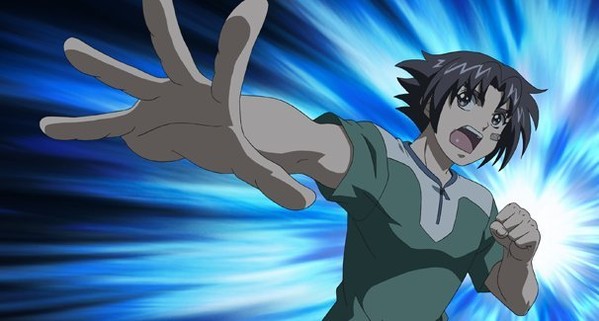 The strongest coward you’ll ever meet

Story
Kenichi Shirahama is just about the wimpiest person you could ever meet. He runs from everything and lacks any kind of athletic skill. But he wants to change. He even joined the Karate Club in the hopes of becoming stronger. Unfortunately for him, the club doesn’t want “Weak Knees” Kenichi ruining their image, so they challenge him to a fight…not good. However, luckily for Kenichi, he recently became friends with Miu Furinji and she kicks ass. After witnessing Kenichi’s courage, she agrees to introduce him to the masters of the Ryozanpaku Dojo.

After proving himself worthy of their tutelage, Kenichi becomes the First Disciple of Ryozanpaku. Learning from each of the five masters, he strives to become stronger. He is taught Karate, Jujutsu, Muay Thai, and Chinese Kenpo, using each discipline to increase his strength exponentially. The series focuses a great deal on the intricacies of various martial art styles taught and strives to explain the mechanics behind each move Kenichi learns. For example, rather than simply show the classic anime “flash step” the series explains that it is a quick dodge technique called “Kouho Haiho”. Though the masters possess ungodly powers to express their mastery, it all stems from these simpler skills. Rather than a simple power up or new transformation, Kenichi improves through learning new skills. Though he is nowhere near as powerful as his opponents physically, Kenichi’s knowledge of various styles grants him a certain air of unpredictability. 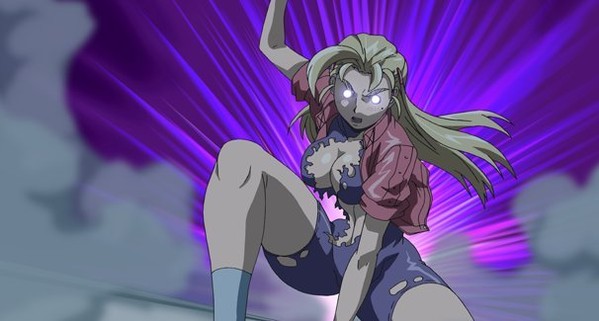 The series constantly touches on the theme of effort. Certain characters that are introduced claim to have a natural affinity for the martial arts. Athletic, strong, relentless. These traits lend to a great fighter, but it isn’t enough. Rather than Kenichi being some legendary fighter he’s just very, very determined and trains really, really hard. The subtle time jumps, usually a week or month, also show that Kenichi is improving fairly realistically, rather than immediately being imbued with martial arts knowledge.

As the series progresses and Kenichi grows stronger, he gains the attention of a street gang called Ragnarok. With names based in Norse mythology and the power to back those titles up, they prove to be a constant source of stress and struggle for our hero. Each of the higher ups of Ragnarok possesses their own unique and powerful fighting style, forcing Kenichi to train harder and learn faster. What began as a goal to become stronger transforms into a quest for survival. The situation escalates further when Nijima, school-yard information broker and personal enemy/friend to Kenichi, suddenly takes an interest our Mightiest Disciple and adds fuel to the fire. A lot of fuel.

Towards the end of the Ragnarok Arc, the story begins to delve into the more spiritual side of martial arts. Characters begin to explain the concept of ki, intimidating enemies  into submission with their killing intent alone and seeing their opponents movements with their inner eye. These spiritual abilities cause the fights to escalate in intensity, increasing the speed and power of each combatant immensely. Whilst these elements lend to the reveal of a larger story that continues after the anime ends, the series doesn’t feel like it’s cut short. Finishing at the end of an arc adds a sense of finality to the plot, whilst also leaving the idea of a future open. 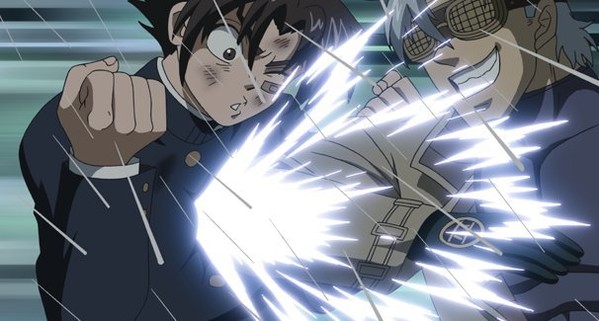 Visuals
Since the show is so focused on the technique of martial arts moves themselves, a lot of slow motion and freeze frames are involved during the fights shown across the series. These moments are generally narrated by one of the combatants, presenting it as a view through their battle trained eyes, rather than just slowing it down to show you a cool kick. Freeze frames are also generally used during the final strike of a combo, emphasising the power behind it. These moments don’t get in the way of the action too much, as they explain the martial arts moves which are the core of the show. During some of the more important strikes, the animation receives a slight bump, becoming more intense and detailed to convey the intensity of the moment.

Whilst in combat, it is fairly common for fighters to be set ablaze by their fighting spirit. Each character generally has their own colour associated with them, expressing their ki and fighting spirit. This is generally a sign that someone is angry, or about to hit someone. Hard. Another constant visual throughout the series is glowing, pure white eyes. This generally appears to show that a character is intimidating or angry and can escalate to the point that their eyes look like headlights. Demonic headlights. Of death.

On the lighter side, Kenichi spends a majority of his time in chibi form whilst training. This style is used whenever he is beaten down or defeated by a master…which is a lot. This style is a good sign that whatever is happening is just for fun, so when a training sequence is animated normally you know it’s important. 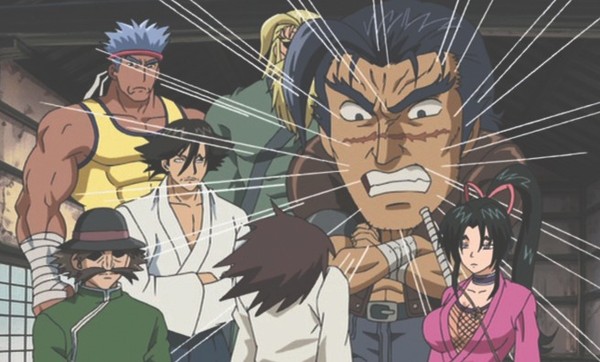 Sakaki always did have a big head…

Audio
The soundtrack definitely suits the overall feel of the series. The audio is extremely varied and fits well with the different moments. During the sombre and reflective scenes, the soundtrack relies heavily on violin and piano to convey the intensity of the situation. The more humourous aspects are aided by the use of more comical sounding instruments, such as the xylophone and even clapping. Even 8-bit chiptunes are employed at certain times. But when you hear a guitar…something cool is about to happen.

The English dub of Kenichi is great. Avoiding the classic problem with certain dubs, each character sounds unique and retains a great deal of emotion in the dialogue. From constantly angry, to hyperactive or rarely heard, the Ryozanpaku masters are…different. Each one is voiced well in their respective style, adding to the personalities of the characters. Even a character who is supposed to sound bored and monotone is voiced well, in that you can tell it’s intentional and not due to a lack of skill. Kenichi, being the character that he is, constantly sounds worried, jumpy and all around wimpy…until you hurt his friends. The character changes and he gains a far more furious tone. Josh Grelle (Kenichi’s voice actor) apparently also possesses a talent for mimicry, copying the voices of other characters at certain points in the series. Sound is also a defining trait of a particular member of Ragnarok. Believing in the music of combat, words like “allegro” are thrown around constantly. A lot of “lalala” and humming is also fairly common. The character even sings dialogue to the tune of Beethoven, adding more culture to say the least. 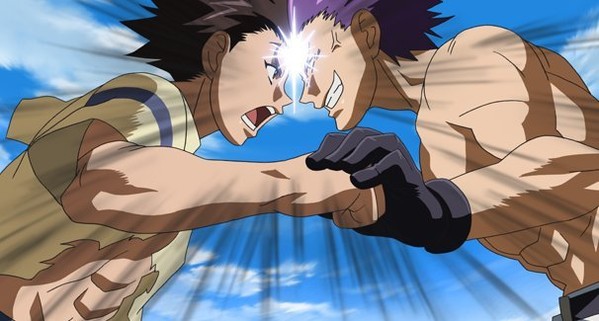 Extras
The Kenichi collection features the standard extras of an anime release. Disc 4 includes textless versions of the opening (“Be Strong” and “Yahhoo”) and ending themes (“Catch Your Dream” and “Run Over”). Also included are trailers for other series. Disc 8 contains the same extras, adding a textless version of the new ending (“Kokoro Kara no Message”) to the list. The trailers are also identical to those on Disc 4.

Overall
Kenichi: The Mightiest Disciple is fun and interesting. The explanation of each move gives you an added insight into the fights, not present in other animes. It also makes you feel as if you’ve taken away a little self-defence knowledge for yourself…not that you should start any fights to practice. For an anime so crazy and intense it feels fairly grounded, centring on an average guy and his quest for strength, along with highschool jerks and overly intense masters. Kenichi is a cool anime that continues to escalate and just keeps getting cooler. I mean, there’s a fight on the roof of a speeding bus, and it’s not even a major fight. Awesome.