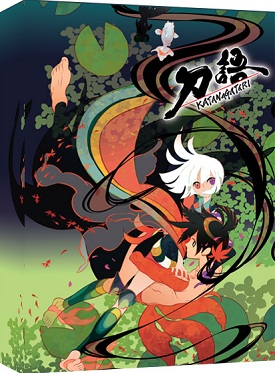 Overview:
Earlier this year in July an anime series was released that was unlike most of the other shows we have seen in North America. While the story may have been a bit formulaic the show contained one of the most unique art styles that I had ever seen and that show was Katanagatari. Katanagatari’s rough English translation means Sword Story and it was originally a Japanese light novel that was written by Nisio Isin back in 2007 and was finished in that same year.

Now the Katanagatari which I reviewed in July was only part one of the series, and NIS America has now released their English subbed version of the second half of the series effectively bringing the storyline to a close. In this final volume, does the story of Shichika and Togame reach a satisfying conclusion? It is extremely recommended to read the first part of the series’ review first.

Story:
With one half of the series down, Shichika and Togame are also halfway through acquiring all of the swords (Klesha Bringers) that Togame has set out to find. However one of their biggest threats begins to loom, Shichika’s sister Nanami who has managed to acquire one of these swords for herself. To make matters worse the Maniwa Ningun and Princess Denial who is Togame’s rival all begin to move towards acquiring all of the swords including those already obtained by Togame. 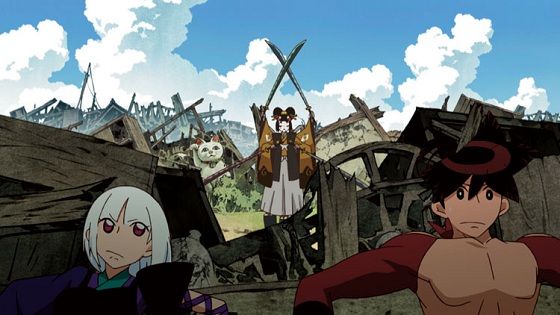 With all three forces moving to gather Shikizaki Kiki’s Klesha Bringers tensions rise and the battles will only grow to be fiercer. So many forces are beginning to clash at once but only one can remain the victor. The only problem is, will Togame and Shichika be the last owners of the mysterious swords or will they fall to the rest of the forces moving against them? And what is the reason that everyone seeks the collection of twelve Klesha Bringers?

In my review of the previous season I went into detail about how each episode of Katanagatari followed a rather rigid formula. Now while the formula is still here, where every episode involves Shichika and Togame encountering a Klesha Bringer owner and defeating them. However there is much more going on in the background than in previous episodes.

Namely the other factions moving around including Princess Denial heighten not only the tension but also provide constant chances for interactions between the rival groups that could explode at any moment. The appearance of Shichika’s sister finally begins to reveal that he is much more than just a living weapon and this is quite apparent towards the latter half of the series as his emotions begin to take shape. 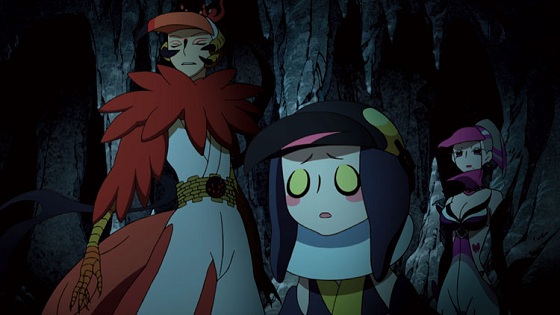 One of the biggest draws to the storyline of Katanagatari is the developing relationship between Shichika and Togame. Over the course of the series we have seen the two become quite inseparable and the
transformation of their interactions with one another is something that is great to see in every episode. Unfortunately for this, the amount of dialogue that is presented at any given time is something that seems to always separate the viewer from the experience. Nothing is left to be inferred, everything is explained and given and this can cause a significant separation emotionally from any scene.

This is all the more apparent near the very end of the series as an emotional roller coaster comes out of nowhere. While some viewers shouldn’t have any issue feeling the impact of the drama that they are seeing on screen, some will simply just wonder why an ending like that would have happened. For those that do feel the impact however, it will be quite heavy as Katanagatari does end quite satisfyingly and the ending will stick with you long after you have ejected the discs from your player of choice. 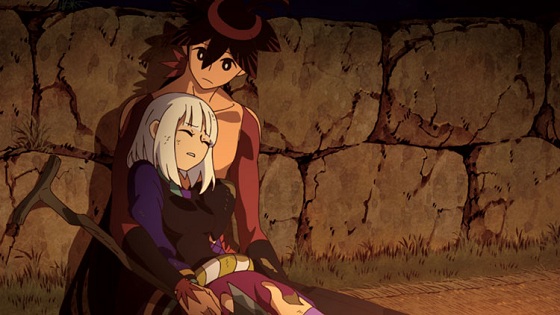 Artwork:
There is plenty that can be said about an artist that stays true to its art style. Thankfully Katanagatari is a series that has taken its art style and made it their own without changing anything over the course of the series. Every character has a unique and amazing look about them, something unlike anything you have seen before. This doesn’t even touch upon the artwork available in the art book which only heightens the pleasure one can derive from this series’ artstyle.

While man shows can pride themselves on having a very complicated and detailed artwork, but few can take such basic designs and make them something great. Everything in the world of Katanagatari is made to look like something one would find in an art book, whether it be the environment that the characters are currently in or the battles that occurs in every episode. Those looking to see a series with a unique appearance need look no further than Katanagatari.

Audio & Subtitles:
The series continues to provide exemplar music. Each episode has a different ending song and animation which is stellar for a series with as much quality in the music. The reason the music is such a pleasure to the ears is that it mixes both modern music and classical music to provide an amazing atmosphere and usually ending songs blend well with the animation. To top it off, the fighting music is absolutely perfect as it seems to have been recorded to go along with the actions that the characters would be taking in the fight. 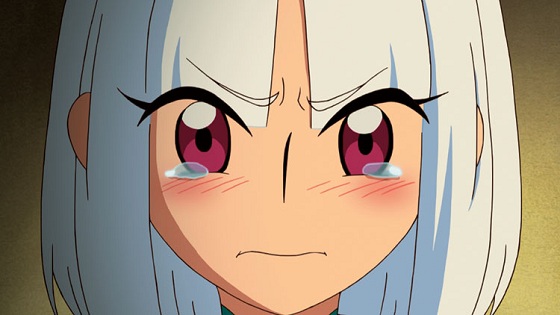 Now the voice actors are all the same for the main characters, and the newer characters that we are introduced to are provided great voice work that manages to fit the character well enough. This is a must for a series that is so dialogue heavy that viewers will become disinterested if the voice actors didn’t pull off as great of a job as they did here.

Now it shouldn’t come as much of a surprise as volume 1 of Katanagatari was only English subbed with Japanese dubbing, but the only voice track in volume 2 is for Japanese. Which of course means you will need to read along with what the characters are saying to understand what is happening. Thankfully the subtitles are easy to read and did not contain any grammatical errors that I was able to discern from watching each episode.

Extras:
NIS America’s release of Katanagatari Volume 2 comes with a combination pack of two DVDs and two Blu-ray discs. Each one of the discs contains some of the series’ clean ending animations and songs which is a plus. Each part of volume 2 is held within a slim case each with a nice piece of artwork on the cover but that is nothing compared to the collective hardcover slipcase. The slipcase contains amazing artwork for the series which rivals that of the first volume, making it a challenge to see which one should deserve a place on your shelf.

The hardcover artbook for volume 2 is named ‘The Epic of Shichika’ and what an epic it is when you open up the pages. The artbook is the same size as the slipcase and is full of amazing artwork as well as song lyrics, episode breakdowns and a glossary for any complicated words or references that could be difficult to understand. If there is anything that can be said about the way that NIS America creates their premium edition’s it is that they create bonus content that no buyer will have remorse over.

Overall:
Katanagatari Volume 2 provides the series with a needed boost to help bring the story to a close. While the amount of dialogue can sometimes provide some separation from the characters to the viewer, the developments in this latter half of the series helps dispel some of the problems which plagued the first half. The series shrugs off some of the formulaic ways of volume 1 and provides a very enjoyable storyline with amazing action, a wonderfully unique art style and a satisfying ending.

I give Katanagatari Volume 2 Premium Edition: