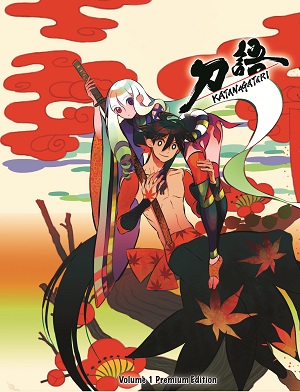 Overview:
There are many series that contain a certain a certain unique style about themselves, it could either be the characters involved, the way the show presents itself or even the art style. The other half of NIS America’s first offering of a Blu-ray and DVD combo pack is Katanagatari. Katanagatari means Sword Story and was orignially a Japanese light novel that was written by Nisio Isin back in 2007 and was finished in that same year.

Not only does Katanagatari come with the standard premium edition packaging, but it also has a unique feature all of its own. With episodes lasting fifty minutes long instead of the usual twenty five minutes, the series has plenty of content to watch. With the first six episodes in Volume 1, how does the series present itself?

Story:
The story of Katanagatari follows a man named Yasuri Shichika. He is a self proclaimed swordsman who actually fights without a sword. He is hired by a woman named Togame to collect twelve legendary swords scattered across the country. These swords were forged by the legendary blacksmith named Shikizaki Kiki, who made 1,000 different swords during his lifetime, with every one of them being a practice sword to perfect his craft and create the twelve best weapons in the world.

Yasuri had been schooled in the martial art of Kyotoryuu which means that he is the best fighter who could join with Togame to complete this dangerous mission, as such he agrees to journey alongside her and assist her in defeating the owners of the twelve blades. Earlier I mentioned that the name of the series, Katanagatari roughly translates into sword story which is certainly a proper name for the series. 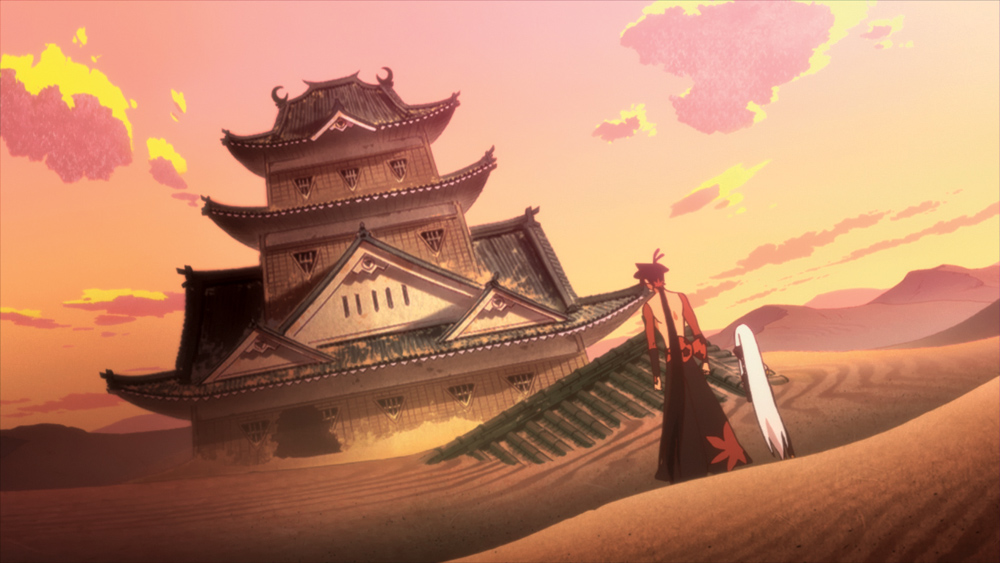 This is because the main plot of the story follows the journey of these two characters as they not only have to do battle with these other samurai to obtain the blades, but also the consequences of what will happen because of their actions. The major feature about these fifty minute episodes is that each episode tends to focus on one of the owners of the twelve Deviant Blades. The fact that the episodes are fifty minutes long helps to make these sequences actually very well done, usually following the same formula of character development for most of the episode and then finally a battle. The enemies, though usually focused on one at a time, are fleshed out thanks to the fact that they often get some background information revealed as well as why they are holding one of the swords.

Something that some viewers may find a bit problematic however is the fact that the series is very dialogue heavy. Katanagatari’s story style explains practically everything that happens or is going to happen. The vast amount of dialogue at times can be a bit too much and it may overwhelm the viewer with a bombardment of information that will be hard to digest, let alone understand at first. Though when the dialogue isn’t explaining something and is interaction between the characters themselves, then it is actually a major highlight of the series. Though be warned, with the vast amount of spoken dialogue here, the average viewer may grow tired of just constant talking without anything going on in any given moment. 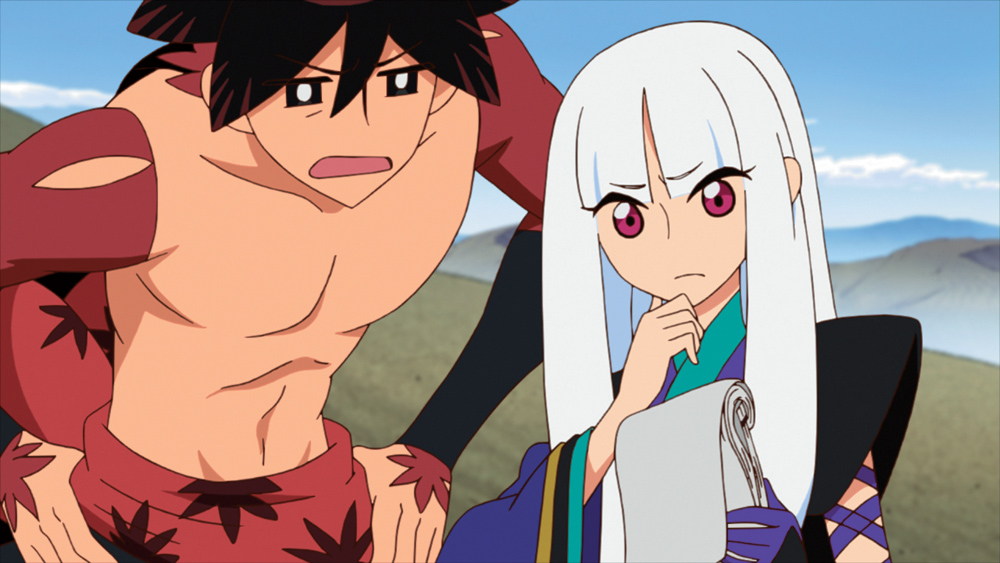 Mixed in with all of this dialogue however is a lot of humor. The humor in Katanagatari is a bit unique however as a lot of it is meant to be simply deadpan. This means it tries to get laughs through failed attempts at humor which only make things funnier. This can either come from a character’s ineptitude, sexual themes being unacknowledged though blatantly obvious among others. This does help brighten up the mood during long periods of dialogue.

Artwork:
Although the anime itself is supposed to be set in feudal times, there is little to no historical accuracy present in the character designs as well as a few weapons themselves. The clothing that some characters wear is extremely colorful and unique, which is certainly a point in the shows favor. If it were plain clothing set simply for that time period, it would lose much of its charm. Instead the series comes off like a fairytale in its design and is all the more wonderful for it.

The character designs themselves can feel a bit plain at times, though thanks to their unique outfits and coloration this helps to offset the designs themselves. The character’s facial animations can be seen as too simplistic at times, and the art direction is obviously not going to be everyone’s cup of tea, but the series manages to pull it off swimmingly. Meaning that if you can tolerate the character’s facial animations then you will be in for one of the most unique looking recent anime in 2011.

Audio & Subtitles:
For a show that puts as much stake into dialogue as this one, it also requires a very good crew of voice actors to go along with it. Thankfully Katanagatari contains a stellar crew of voice actors. At first, Shichika may sound like a very poorly voiced character, until you realize that that is simply his personality and that his performance grows on you as you watch the episodes. This is certainly a hard feat to perform, but it is made all the better with the rest of the cast delivering a masterful delivery of the dialogue. 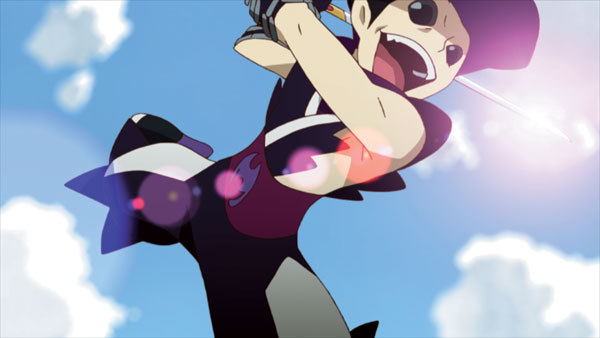 Katanagatari is a bit different as far as Opening and Ending music goes. Sure the Opening song is relatively good and most viewers won’t mind hearing the music from time to time, each episode features a different ending song. This means that all six episodes contain a different song, though some may not all be hits, it will be difficult to not find at least one song that you will adore thanks to the variety implemented here. The background music for the show itself is well exceptional thanks to masterful application. Every bit of background instrumental is used at the proper moments and enhance the scene for the viewer’s enjoyment.

NIS America’s release of Katanagatari is an English subtitle only release which means that there will be a lot of reading involved. This shouldn’t put most viewers off, but it is something to watch out for. The subtitles themselves do a good job for the most part, though there are a few jokes that will likely go over the viewer’s head due to the way things are described and Japanese names are preserved.

Characters:
Katanagatari focuses heavily on only two characters throughout the first six episodes. This being Shichika the man who has been trained to fight without a sword and instead uses his hands and legs as sword-imitations to deal out damage. Shichika is a man who has had very little dealing with the rest of the world and is very bad at dealing with emotion and understanding certain aspects of the outside world. Because of this he simply views himself as a weapon who Togame can wield at will for her quest.

The other half of the duo, Togame is a self proclaimed strategist. She requests that Shichika falls in love with her because she believes that is the only way to assure that he won’t betray her. Although she is only self proclaimed, she is quite intelligent but is also clumsy. This often places her in situations where she is most likely to be embarrassed and provide humor to the viewer. 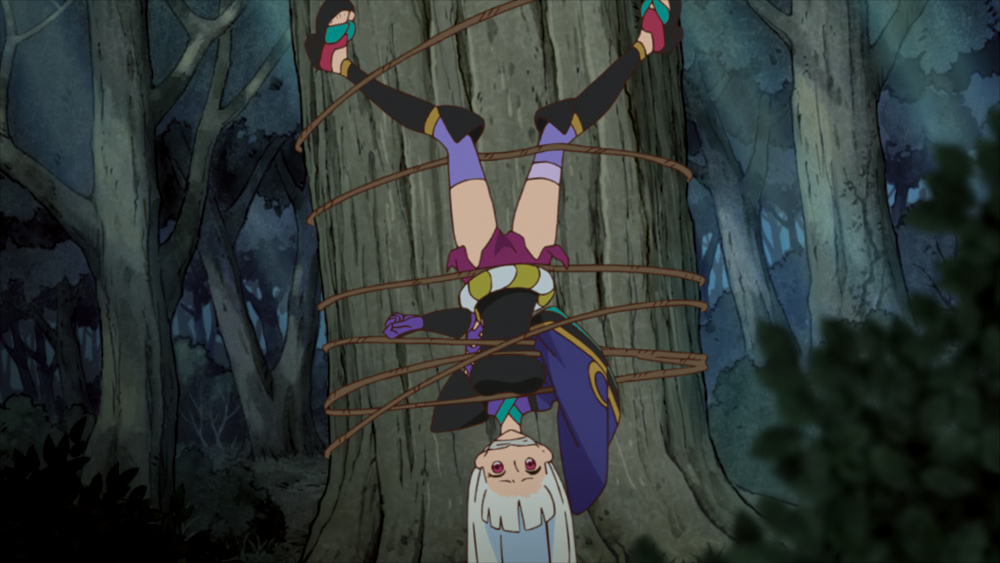 This duo works extremely well together and their personalities do a great job of feeding off of each other. While Togame can be seen as a tsundere type character and it is easy to place Shichika in the idiot category, they break these molds by their actions and developments. Considering most of the other secondary characters see little long term development the fact that these two work so well together is a necessity.

Extras:
NIS America delivers yet again with Katanagatari Volume 1 Premium Edition’s contents. As usual their package comes in an oversized, tough collector’s box that contains two slip cover DVD/Blu-ray cases as well as a hardcover art book. The hardcover art book is named Togame’s Travel log and contains a number of proffesional artwork as well as episode summaries, a glossary of terms and more. 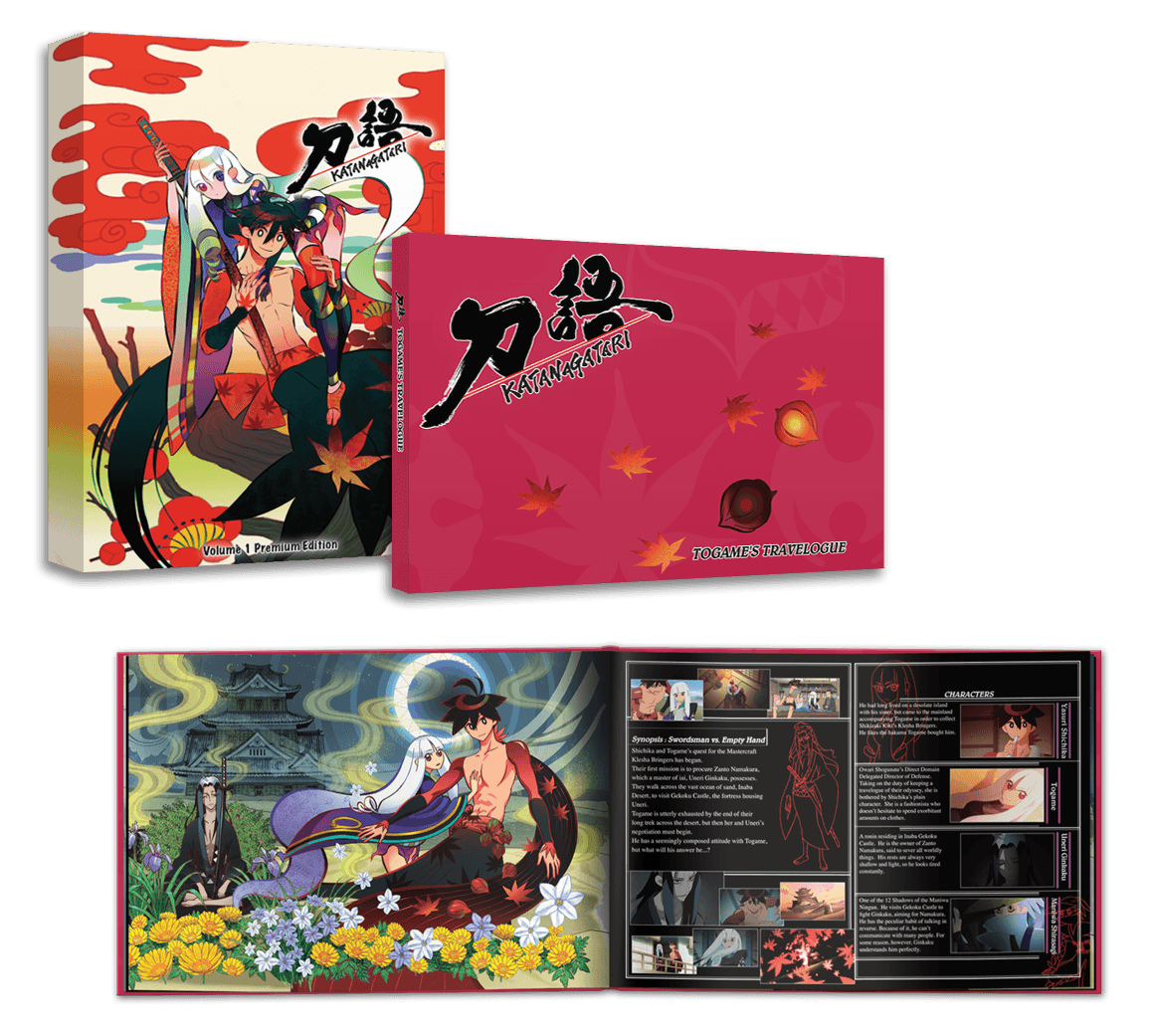 The DVD and Blu-ray bonuses are rather slim however as the only bonus content on these discs is they only contain the clean openings and endings for the series. This is a bit of a let down but the premium edition comes with plenty of extra content already, and the fact that the Katanagatari Volume 1 Premium Edition’s collector box has the same styled artwork on the cover as the rest of the anime, it is a work of art in and of itself that is almost a shame to tuck away into a shelf somewhere.

Overall:
Katanagatari can take the prize for containing some of the most unique looking art styles you can find in an anime. It also contains plenty of narrative and storytelling with amazing combat and a pair of characters that work well together. Still the focus on discussion can put some viewers off and, even though the series looks great for some, not everyone will enjoy the style used. The series itself cuts off in the midway point and will be leaving fans waiting for Volume 2 to be released later this year. With the amount of emotion and enjoyment that can be derived out of simply watching the first volume, anime fans would truly be missing out if they ignored picking up Katanagatari’s volumes.

I give Katanagatari Volume 1 Premium Edition