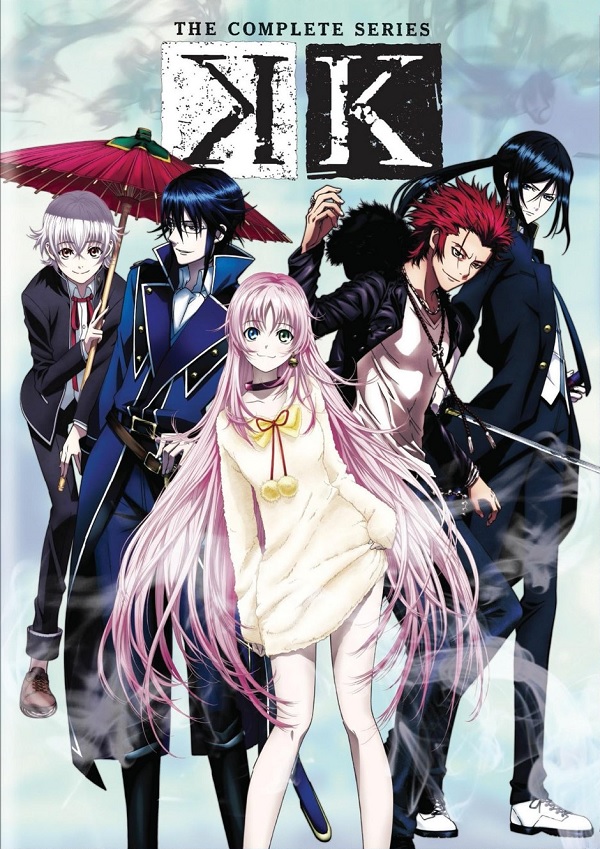 Overview
In a time where anime and manga series tend to feature titles that are so long that simply spelling out the full title would be longer then this sentence, there are still simplistic sounding shows such as K. In fact, with such a simplistic name the title was mostly presented as K-Project so that anime fans would remember what GoHands and the rest of the advertising team was talking about. Anyways, now that Viz has released K in North America is this one letter anime worth picking up?

Story
Yashiro Isana is a bit eccentric as he always carries around an umbrella and lives a care-free teenage life as he enjoys attending high school with his friends. His partially normal life is shattered when he is suddenly assaulted by men wielding red fire who seem to be out for his head. He manages to escape them with the help of another strange man named Kuroh. 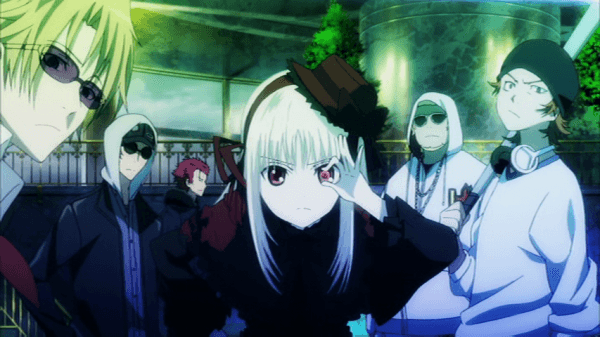 Unfortunately for Yashiro, Kuroh’s assistance was only meant to be a delaying tactic as he too is after Yashiro’s head. The reason for this is that Yashiro is a dead ringer for a man who murdered one of the red group’s clansmen in cold blood and because of this, they are after his head. You see, in the somewhat futuristic setting that is K, there are certain people who have been given special abilities and are deemed Kings.

These Kings wield different powers and often form a gang that consists of their fellow clansmen. Kuroh is the servant of the previous Colorless King who has been tasked with judging the worthiness of the next king. After witnessing a video showing a person looking exactly like Yashiro murdering a red clansman and declaring himself the new Colorless King, Kuroh has deemed Yashiro to be an evil king and wishes to take his head. 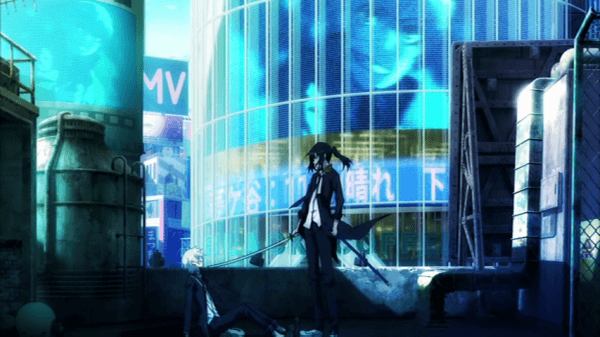 Only through the manipulations of Yashiro’s friend Neko, that happens to be a cat turned human with special powers, he manages to escape from this predicament only to be found once again by Kuroh. Claiming that he is innocent, Yashiro must prove to Kuroh that he is not the man in the video and save his life. While this is occurring, there is a war brewing between the outraged Red King’s Homra clan and the Blue King’s Scepter 4 clan, one trying to track down the killer of their fellow clan mate and the other seeking justice and attempting to keep some semblance of peace.

K is a series that presents viewers with an interesting premise and places all of its cards on the table within the first two episodes. With the Red Clan hunting for Yashiro’s head, the Blue Clan fighting against them and also searching for Yashiro while trying to keep the Red Clan’s King prisoner, and Yashiro attempting to prove his innocence to Kuroh, there seems to be a lot happening in K and things only become more complicated later on as the story begins to introduce a handful of plot twists and new Kings appear. 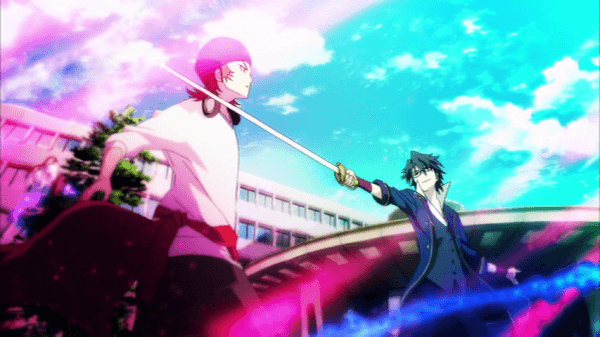 Unfortunately while this is true and K’s story is interesting in its own right, the end result is a series that, despite being thirteen episodes in length, feels rushed and is riddled with plot holes. This problem lies in the fact that despite introducing the interesting concept of the Kings and their clansmen, the series leaves too many things unexplained. The source of the King’s powers are given a once over but is left vague whereas the numerous characters that are introduced and are given quite a bit of screentime mostly feel like filler members.

Sure we are presented with how close the Red Clansmen were to their murdered friend and what he meant to them, but nothing else is touched upon despite there being hints dropped everywhere and drama involving these groups that is meant to drive the viewer’s feelings, but if we have only briefly been given a reason to care about the Blue Clan, why should we care? 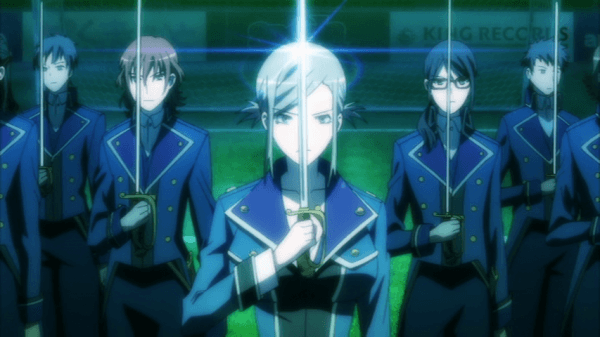 That isn’t to say that K is a bad show by any means, as it still offers an intriguing storyline with a likable cast of central characters in Yashiro, Kuroh, and Neko, as well as the bonds between the clansmen but in the end it feels like the story was rushed towards the ending with too many things trying to be tied up all at once and leaving too many threads dangling.

Visuals
All one needs to do is take one look at K to see that the series is absolutely gorgeous looking. GoHands has done an incredible job with the series as everything from the characters to the environments that they move through are stunning looking and detailed with something always happening. The use of color in K makes for a nice mixture of styles that will keep you glued to the screen. Now a quick note about Neko, while her character seems to be a fan-service magnet, the series never presents any major nudity and she plays a pivotal role in the story. 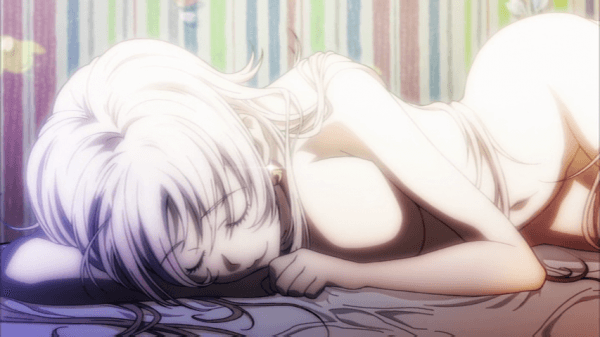 It is also nice to note that with all of the battle scenes in the show, which mostly occur between Kuroh and the Red Clan or the Red Clan battling against the Blue Clan, is incredibly fluid without any noticeable drop in quality. The fights are impressive looking and although most of the battles take place using the special abilities given to the Clansmen, a certain character’s fighting style with his skateboard is something that has to be seen.

Audio
As with most of Viz’s releases, K is presented with its full English dub as well as the original Japanese voice track. The English cast handles their characters rather well and whenever a certain body jumping character appears the voice actors handle the personality shifts well. Sam Riegel makes for a believable sounding Yashiro and Stephanie Sheh’s Neko actually sounds more impressive than her Japanese counterpart. 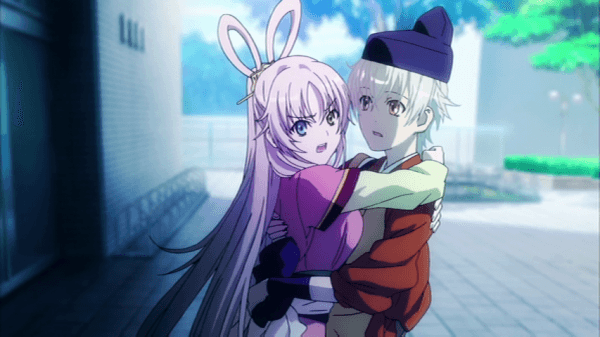 As for the soundtrack in K, it is my pleasure to say that while there are a few forgettable pieces of background music in the series, the majority of the musical pieces are delightful and fit the scenes perfectly. It also helps that there are a number of vocal insert songs scattered throughout the episodes, though it is unfortunate that they are not subtitled. The opening theme for K is “Kings” by Angela which is a nice fitting theme while three different ending themes are used throughout the series. “Tsumetai Heya, Hitori” by Mikako Komatsu (the Japanese voice actress for Neko, is the main ending theme which is soft in tone and a suitable closing theme but “Circle of Friends” by Yuki Kaji and “To be with U!” by Angela are also used as one-shot ending themes.

Extras
As this is the DVD version of K, the release only comes with a few on-disc extras. These bonuses consist of the clean opening theme, a clean version of all three ending themes, trailers for K and other Viz anime and finally the “K Events – US Convention Highlights” which is about three minutes long.

Overall
K is a series that has its flaws, but it also has some of the best animation and style that you will find from Viz’s library of recent releases. By presenting the audience with an intriguing storyline with a bit of a supernatural sense and plenty of action, K kicks things off with a bang only to sputter around near the end before giving viewers a satisfying ending, albeit one that is poised to be continued later this year.