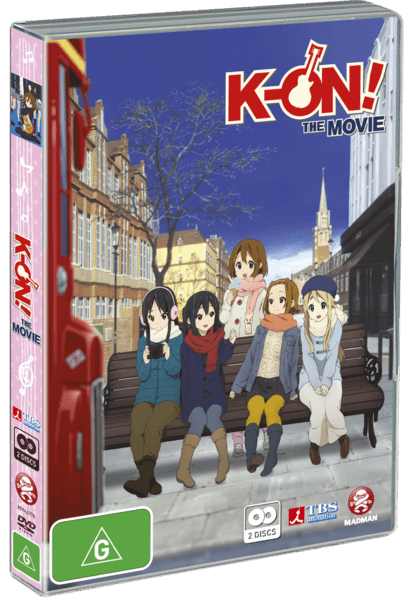 Overview
Everyone remembers school. The friends, the teachers…homework. OK, so not everything was fun, but we still look back on it fondly. Something that K-ON! series and K-ON!! sequel tried to remind us of (reviews of which may be found here, here, here and here…there’s quite a bit). Unfortunately, not everything can last forever, as the girls of After School Tea Time are finding out. With one week until they graduate, the girls set off for one last adventure, an encore to their high school years. But what happens when the Light Music Club ventures international? 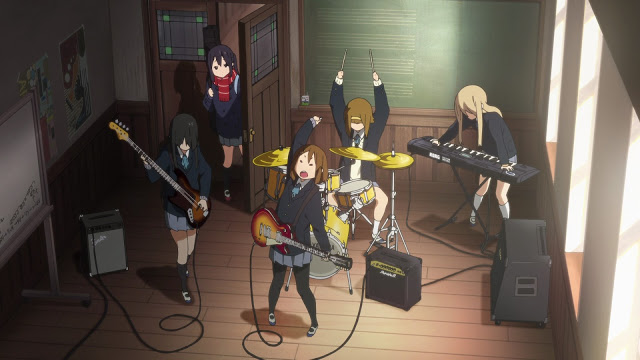 Story
Graduation time is here and the girls of Sakuragaoka Girl’s High Light Music Club are all set to go to college. All except one, underclassman Azusa. Being younger than the rest of the girls, she will be a student of Sakuragaoka for a little while longer and the new president of the Light Music Club. Knowing that they won’t all be together after graduation, the girls decide to get Azusa a present, to remember their time together. Accidentally, Yui knocks over Mustang, Azusa’s guitar, and causes it to make a sound which she interprets as “song”. With a sign from Mustang, the girls resolve to write a song for Azusa to memorialise their time together. Unfortunately, their lack of skill hiding secrets results in Azusa becoming suspicious, causing her to imagine all manner of terrible outcomes. Not much later, the girls hear that other school clubs are taking graduation trips to celebrate, the girls decide to take one of their own. Naturally, each girl wishes to go somewhere different but after some disagreement, some trickery and help from a turtle, they settle on a destination: London. England. In Europe. The girls gather up their luggage, instruments and all, and set off for the birthplace of the British Invasion.

With five days to spend, the girls waste no time exploring the sites of London…Once they manage to get in a taxi. After heading to the wrong hotel, the girls make their way across London, taking the city in. After seeing a sushi place, they decide to see what a Japanese restaurant is like in England. Due to some misunderstandings and a complete lack of communication, the Light Music Club winds up on stage. Naturally, they’re a hit. Unfortunately, they leave hungry. The girls later learn that they mistakenly took their gig from another Japanese band. The next day, they receive a call asking them to perform in a Japanese Culture Festival to be held in Jubilee Gardens. After some debate, the girls decide to accept the offer and play. The Light Music Club don their school uniforms and play on an outside stage, in the view of the London Eye. 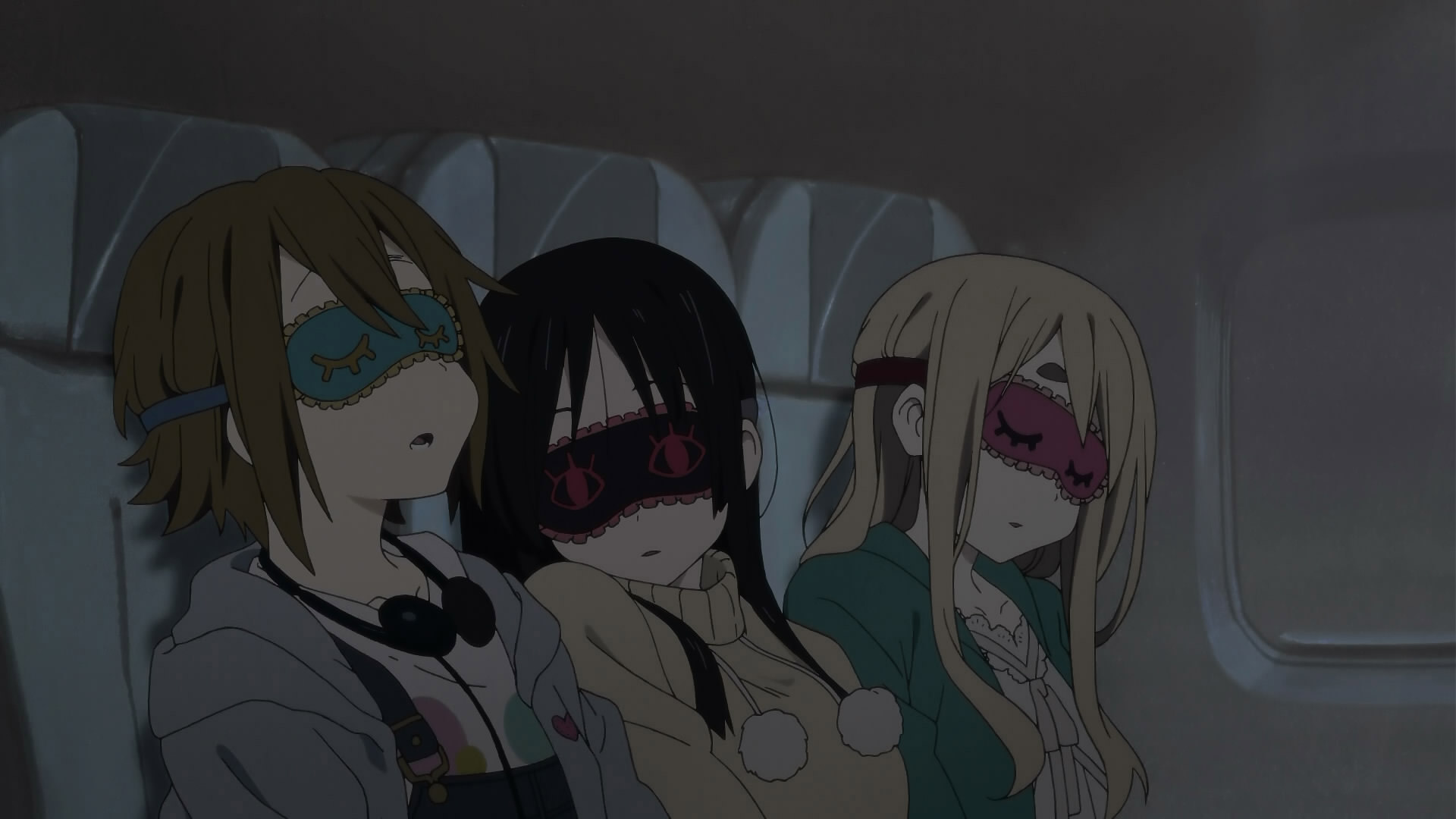 The end of the film sees the girls playing one last concert before school, under the protection of Sawako. The girls also finally manage to play Azusa her song, leaving behind one last present as everyone goes their separate ways. With Azusa’s graduation in one year, the girls wonder where their next trip will take them.

Being a slice of life anime, K-ON! The Movie deals with some of the more mundane elements of travel, such as Yui shorting out an appliance by failing to use a power converter. Language also plays a big part in the story since, as Japanese school girls, the Light Music Club knows very little English. Fortunately for them, situations resolve themselves and the trip is a success. The overall story is a classic graduation story. Fearing leaving what they know behind, but also excited by the possibilities of the future, they decide to have one last encore performance. The story focuses more on the relationships between the girls, rather than a complex plotline, staying true to the nature of the series, focusing on music and friendship. What else could you want? 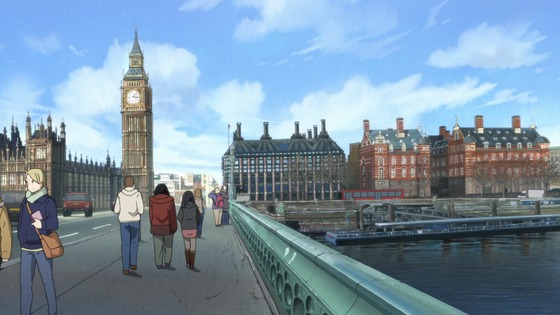 Visuals
K-ON! is…cute. Like, it-doesn’t-look-like-these-girls-are-old-enough-to-graduate cute. They bounce, they run, they fall. They are all very energetic and the visual style helps back this up. The animation itself is very fluid which produces a sense of flow. This style also blends very well with the music, adding a vibrant visual element to compliment the soundtrack. The characters themselves also appear rather soft. The defining lines of characters are not overly dark and often round out rather than meeting at points. This style suits the characters overall cute and innocent personalities.

Outfits are also an important element of the visuals. Just as in the series, the girls tend to go through a few costume changes over the course of the film. Though this is true of the time spent around London, it mostly applies to when they are performing their musical numbers. This further emphasises the visuals during their songs, keeping up with the music itself. However, despite there being a few outfits during the film, the girls tend to default to their classic school uniform, at one point turning down brightly coloured ninja costumes to retain their Sakuragaoka garb. 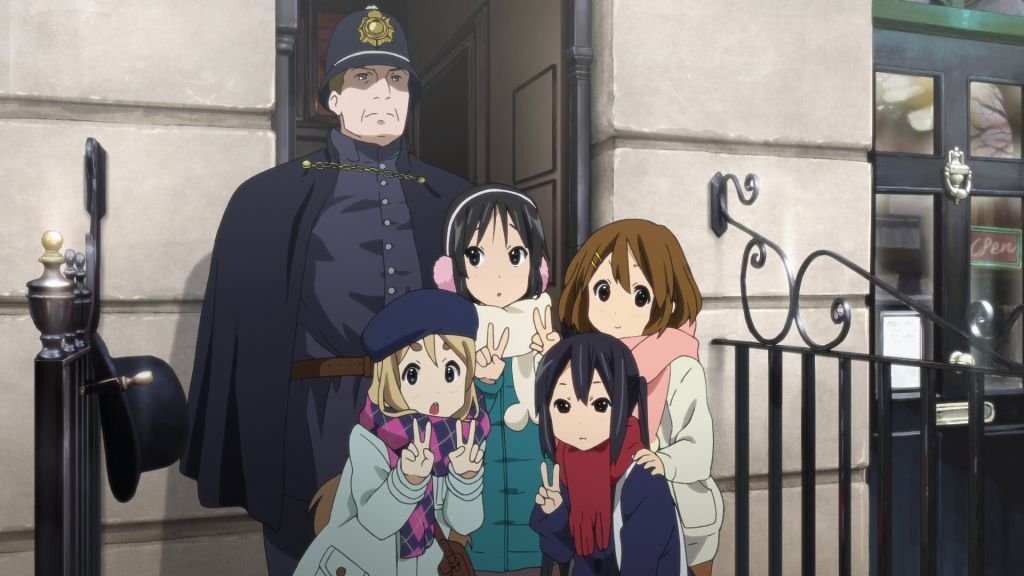 One more, he wasn’t looking at the camera

With London being one of the main focuses, and defining elements, of the film, a great deal of attention was given to the cityscape. Big Ben. The London Eye. Even places like Earls Court and Heathrow Airport. Each of these landmarks makes an appearance and their representations remain true to life. These locations, whilst also consistently in the background, are depicted during the many sight seeing montages of the film. With a soundtrack and some quick cuts, the girls travel around London, at one point even walking across the famous Abbey Road. These montages also include a number of different angles. A scene will sometimes show only the girls’ legs as they walk or even blur out certain characters, akin to a camera focusing. Even the classic night to day fast forward transition was used at one point. This adds a sense of variation to the visuals, keeping it interesting and adding a sense of flow.

Another visual element to note is the written text shown whilst in London: It’s English. Correct English. While this may not seem like a big deal, it shows that a great deal of attention was put into the details, preventing poor, or humorous, misspellings and mistranslations. 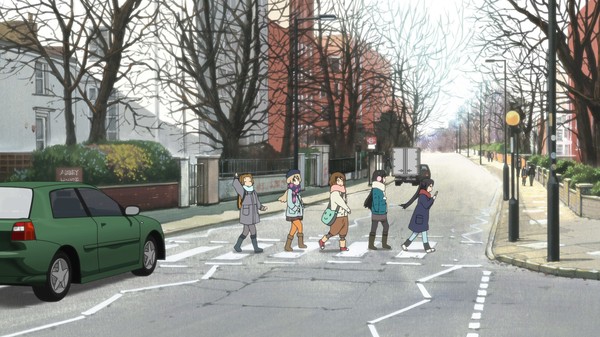 Audio
What it’s all about. From rock to punk, jazz to swing, K-ON! runs the gamut of musical styles. They also throw in a bit of speed metal, courtesy of the former Light Music Club band Death Devil. During their various London montages, the girls are accompanied by some of these archetypal musical sounds. Trumpets, guitar, keyboard, even bagpipes at one point. This adds to the over all worldwide music theme that lies at the heart of the film. Just as in the anime series, the film also features an opening and ending theme. “Ichiban Ippai” serves as the opening whilst “Singing!” plays during the credits, complete with music video.

Being a K-ON! film, the Light Music Club also plays a few songs over the course of their London adventure. Regardless of the dub listened to, the songs remain their Japanese originals. The songs “Gohan wa Ozaku” and “Fuwa Fuwa Time”, from the series, can be heard along with “Tsubasa wo Kudasai”, modified to be Azusa’s song. These songs are all subtitled so that English fans can still fully enjoy the songs and understand the lyrics. 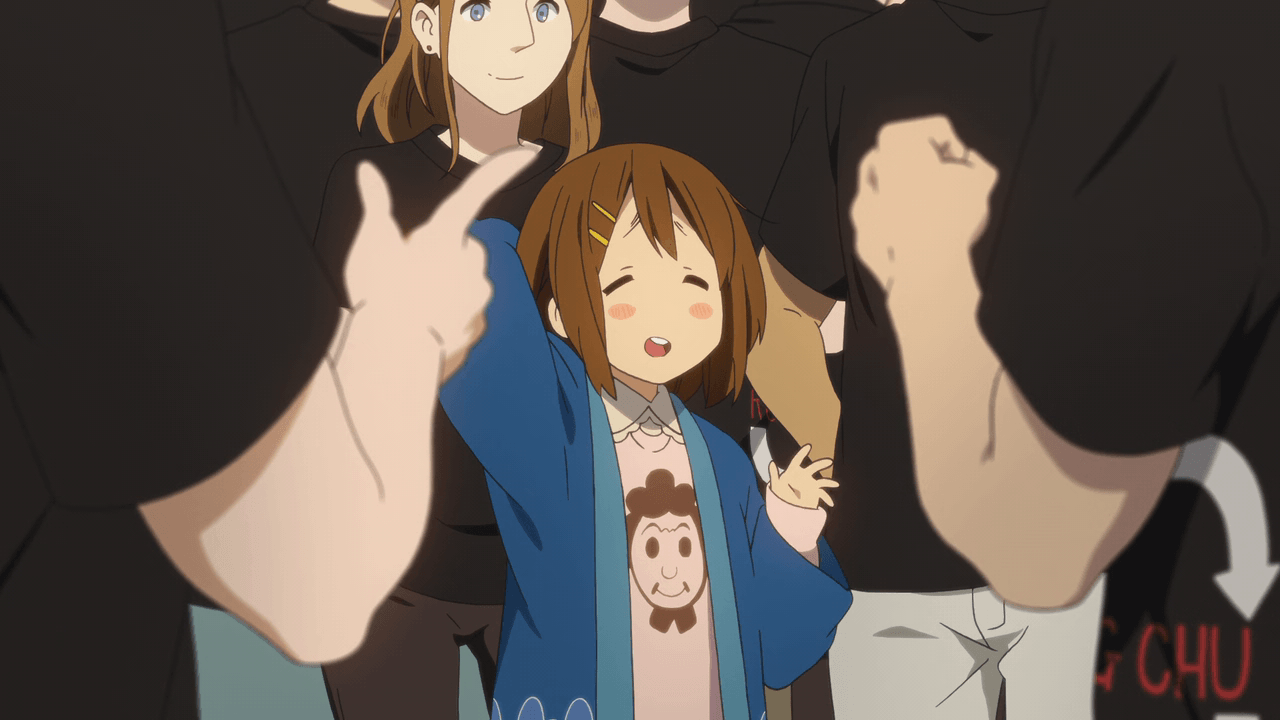 The film also contains both a Japanese and English audio track. As it is a major component of their travels, the Japanese dub clearly represents the language barrier of five Japanese schoolgirls in an English speaking country. Each British character speaks in actual English, as opposed to it being implied. When confronted with this, the main characters struggle through their sentences of fragmented English, often giving up or failing to understand what they said. The fact that two different languages are actually used, adds to the realism of their London holiday. However, this fact doesn’t exactly pass over to the English dub. Since they already speak English, the scenes where the girls supposedly don’t understand English can become a little confusing. The characters will also sometimes use one or two Japanese words to represent this, though its not common. Each resident of London is also given a British accent, in order to substitute for the two language present in the Japanese dub. 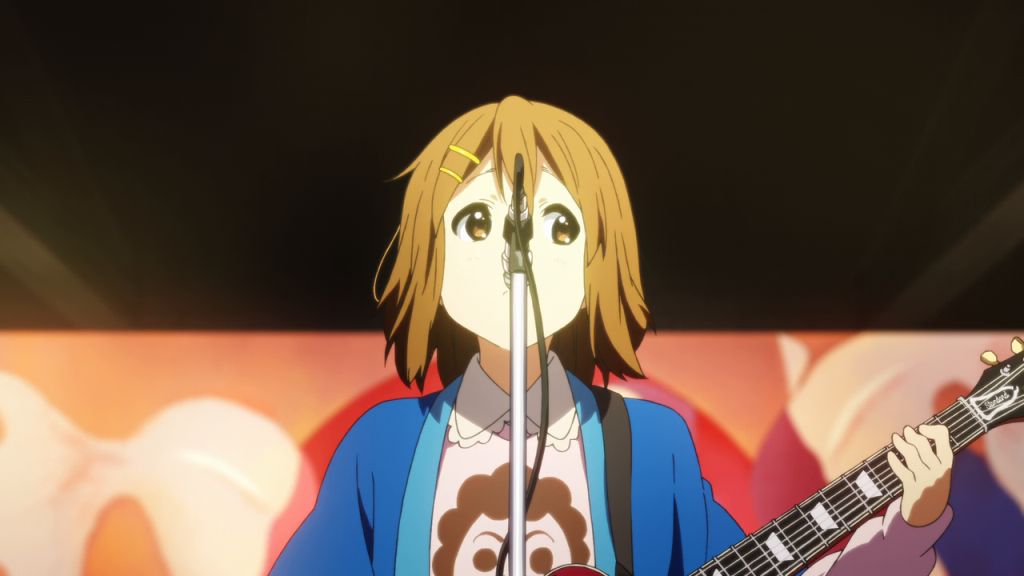 Extras
K-ON! features a long list of extras, a number of which feature the voice actresses for each member of the Light Music Club. An interview of the cast, conducted by Minami Tanaka, delves into the process of Japanese dubbing, as well as seeing how well voice actors know their tongue twisters. Also featured is footage of the premiere of K-ON! The Movie, showcasing a press conference of the cast and the appearance of a double decker bus. More questions, footage of a live concert by After School Tea Time and a rundown of the K-ON! series also features. Director Naoko Yamada’s sightseeing and ‘scenario hunting’ in London is also shown. The extras also feature the promotional Japanese trailers, teasers and television spots for the film, along with trailers for other anime films. Finally, a textless version of the film’s opening “Ichiban Ippai” and closing “Singing!” are also included. 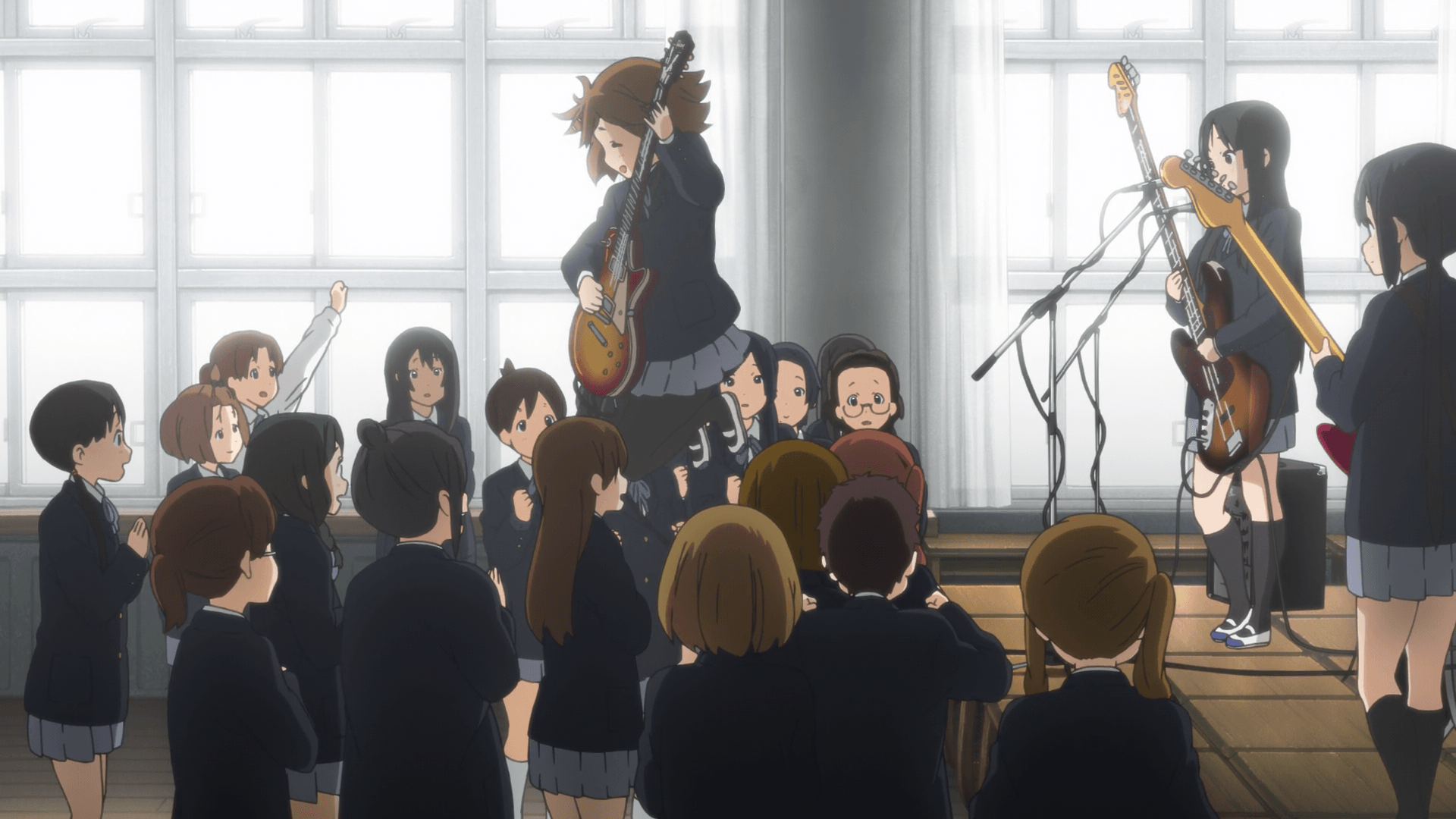 Overall
K-ON! The Movie is…fun. A slice of life story about five friends and their last trip together before graduation separates them. Being a K-ON! movie, music is important, to both the plot and the film itself. Jazz, rock, j-pop, it’s probably in there somewhere. This definitely makes for a lively and varied soundtrack, staying true to the idea that it’s a film about a music club visiting a city of musical history. The animation is also very fluid, especially considering that the visuals feature fairly normal subject matter. Combined with the music, it creates a very upbeat and free atmosphere. All in all, K-ON! The Movie is the series on the world stage. While fans of the show will definitely enjoy the film, others may find the slice of life style a little bland. The film also does assume that the audience already knows the characters. That being said, it’s a fun, cute story about five friends and the time they spend together.