Overview
During the past two years or so, Minecraft has become an utter phenomenon. Yeah, it’s so simple it hurts when it comes to the dig-in-dirt concept, but no one can deny that the game taps into one’s imagination and if you are creative enough, the possibilities are truly endless. Like many successful products, clones have begun to come in droves for Minecraft, with the latest being Junk Jack for the iOS. Junk Jack takes a lot of elements from the popular formula, and throws a 2D spin into the mix with a great deal of options offered to the player. Does Junk Jack dig up enough of it’s own charm to make a name for itself, or is it just a lackluster clone that is just wanting a piece of the pie? Let’s find out. 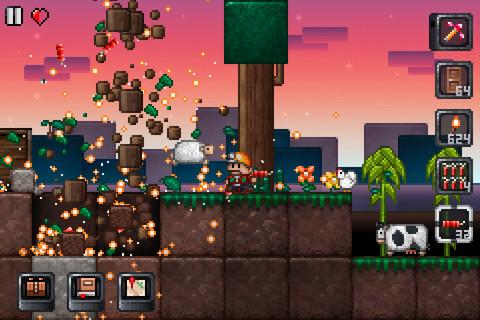 Gameplay
When Junk Jack’s pixelated world begins, you are out in the middle of nowhere and can do just one thing. Dig. Yes, there is no hand holding or sense of direction, but for those who have played Minecraft or this title’s closer kin known as Terraria, you should feel right at home. All of the basics are available right from the get-go, with our little miner ready to bash through the world and find every bit of loot possible to dress up your own creations. During the day, the player can spend time on the top of the world, simply exploring the many side-scrolling biomes of the 2D environment. Each of these landscapes are rich of mineral, building materials, artifacts, and other toys, which makes exploration the backbone of this game’s genuine charms. At night, things are more about survival, as blob-like enemies come out to stick a fork into your plans and test out your own defensive techniques. It’s nothing new from any other clone of the sandbox genre, but Junk Jack has a ton of offerings to keep itself interesting, and if the player can get over the limited space, the game can get quite addictive.

As far as control goes, nearly everything is done by tapping or swiping. Need to dig into a wall? TAP! TAP! TAP! Want to hit an enemy? Swipe! Both methods of control are effective for the most part and make digging up the gems of this crust a simple yet satisfying duty. Moving Jack is a bit more troublesome however, as the player must drag and swipe to move their character from side to side or up and down. It’s really not a bad method of control for the most part, but there were a few times I found myself digging holes and struggling to jump out. The inventory system is also a bit of a chore to navigate, as even though dragging and dropping is all that’s required to equip an element, it can be a bit tough to do so precisely. This is partly due to the fact that I have large fingers and have always been a bit impatient when it comes to touchscreens, but if anyone expects to just flick their way through Junk Jack on the fly, they might need to learn a bit of patience and precision when it comes to grabbing up the goods. 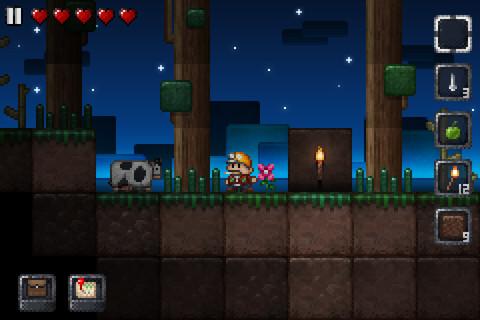 Concept and controls are nice to talk about, but do they truly matter? Junk Jack is all about building and luckily, Pixbits have given enough tools and options for crafting (where you can combine multiple items to make something better) that it is almost impossible to go bored based on choice alone. I started out doing the usual, and building a little house. Soon, my little underground retreat turned into tunnels that all featured paintings, furniture, and even a Nintendo room with some homemade sculptures of gaming’s famous faces. These are just a few examples of what one can do while they create, and the handy inventory can travel to other save files as well, meaning alternate maps can be specifically used for living and mining. Due to how accessible everything is as a whole, it only takes a few minutes for everything to click within Junk Jack and once that happens, it can be nearly impossible to put the game down.

Visuals/Audio
Even though Junk Jack works as a creative playground well, the most enjoyable feature are the colorful and oh so lovable worlds and sprites. Jack himself looks like he was pulled straight off the NES, and is hard for anyone to hate due to his oversized hard-hat and beady little eyes. The blobs and other enemies are a bit generic, but this is more than made up for by the lighting and gorgeous textures that make up the world both under – and above ground. Sunsets are a stunning sight to watch, and discovering a new biome or area makes exploration a true treat and prolongs the length one would spend with the game by miles. 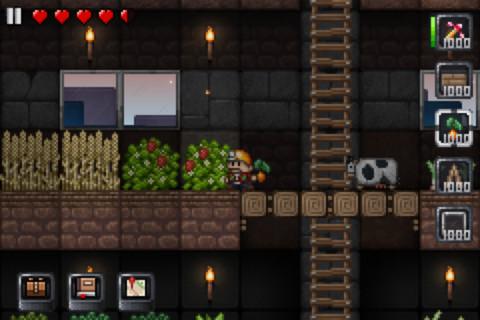 As far as the soundtrack goes, expect some nice chiptune beats that blend well into the background and fit perfectly into this 8-bit world. The true star of audio in my opinion however is the sound effects. Much like Minecraft, each little block has it’s own little “digging” sound that makes each tap feel effective, and the times of deafening silence bring out an intense feeling of doom as you hear enemies gather around you. Subtle touches can work wonders in little titles like this, such as hearing Jack scuffle across the landscape, but it’s obvious a lot of effort went into creating a cozy and inviting atmosphere for the overall game with the mellow tunes and soft effects, and all of this adds up to yet another reason why Junk Jack is so soothing and addictive to play.

Overall
Junk Jack is technically a clone of Minecraft or Terraria, and it really never tries to hide that it’s concept is unoriginal. That doesn’t really matter though at the end of the day, as Pixbits have learned well from the frontrunners of the genre and were able to put their own charms and unique stylings into the game to make it feel distinct. Junk Jack isn’t going to change any minds of those who don’t care for the sandbox genre, but if you are looking for a cheap – yet satisfying experience where you can build and survive on the go, it’s offerings are certainly worthy of a purchase as with all of the continuous updates, Jack is one little mascot who seems to be ready to carve out a name for himself.