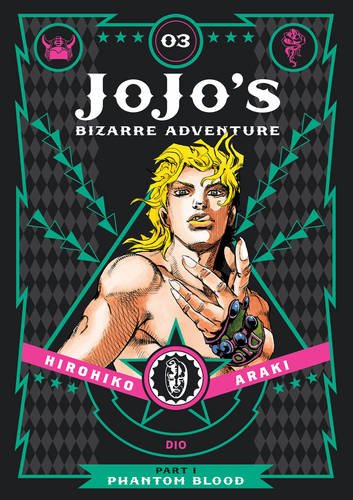 JoJo is in the middle of his fight with Tarakus and the Dark Knight Blueford. Although he faces an immense challenge, he uses what Baron Zeppeli has taught him about Hamon and eventually emerges victorious with the help of his friends. Now he must face his greatest challenge yet: Dio himself. With his ever-growing army of mutant zombie monsters, Dio first plans to take over Wind Knights Lot. Can JoJo kill his adopted brother and enemy and prevent him from taking over the world?

Jonathan Joestar is working towards a goal that will require sacrificing much of what he holds dear. He makes friends with all kinds of unique characters and is on an important quest, during which he will continually be required to push his superhuman strength to the limit. These points will undoubtedly be familiar to anyone who has ever read another shounen series or watched an animated adaptation of one. In its favour, JoJo’s Bizarre Adventure, or at least the Phantom Blood arc, does not simply feature a character with superhuman strength who spends the whole time just fighting various enemies of increasing strength and capabilities. It features supernatural elements and is set in a real time and place. It is not common for shounen series to be specifically dated in the history of Earth, let alone be set in a real location. It is this use of time and location by Hirohiko Araki that helps make this series stand apart from other popular shounen series while following a now-familiar formula.

Araki uses a technique common in realist fiction but uncommon in Japanese series, which is the use of newspaper excerpts to provide evidence of the supernatural occurrences. This technique is, of course, not employed here to actually add credibility to the story. As a supernatural adventure series, you are either going to suspend your disbelief and go along with what the narrator says and what you see happening, or you are going to think that this story is a bunch of bizarre nonsense. This story arc manages to dance the fine line between the former and the latter while moving towards a dramatic climax.

As with many shounen series, revenge is an important aspect of the plot. Equally important are the themes of sacrifice and death, both of which are featured in this volume. Many characters have died already, and the deaths are not going to stop as the plot ceaselessly moves towards the conclusion of this arc. Araki shows just how strong the bond of friendship can be between people; even knowing that they face certain death in doing what is necessary, the characters never falter in their conviction that what they are doing is right for their friends and for the good of humanity.

Another important element of shounen series is the incorporation of a character’s back-story into the plot. In this volume, Baron Zeppeli goes through some important character development. During his flashback, the Baron reveals how he learned the powerful Hamon techniques that he has honed over the years. We find out how he became involved in the plot of the phantom mask and when he resolved to do whatever it takes to destroy it. The flashback occurs during a rather odd time, that being right in the middle of the action, but it helps round the Baron out as a character. It is important for characters in shounen series, and indeed in any series, to be round instead of flat so that readers can understand what the characters’ motivations are. The quality of storytelling here goes to show why Hirohiko Araki’s series has been published for nearly three decades and why it is still receiving anime adaptations and video game tie-ins. Phantom Blood may be a tragic story, but it is told far more effectively than almost all other manga series are these days.

Shounen series are known to be violent, but Hirohiko Araki takes things to a whole other level. The depictions of blood and gore are even more extreme than before and the monsters that Dio creates are even more disgusting and horrifying than before, so be careful when deciding whether or not to pick up the volumes comprising this first arc. Some of the panels can be rather crowded with highly detailed artwork of the characters, making the backgrounds generally less notable than they were during the beginning of the first volume. The rest of the artwork is both typical for a shounen series and very out of place at the same time. Baron Zeppeli’s character design, especially his hat, is very uncharacteristic of such series. He would presumably have been considered quite eccentric if such a person had actually lived in England towards the end of the nineteenth century.

As with Viz Media’s previous collected volumes of Phantom Blood, this volume features an interview with Hirohiko Araki. In it, he discusses how he initially conceived the character of Dio and other facts that will interest fans of the series.

The Phantom Blood arc has been a great introduction to the JoJo’s Bizarre Adventure series. It proves that the tropes common in shounen series have not changed much, if at all, over the past three decades. However, Hirohiko Araki is skilled at taking familiar tropes, combining them with historical references and time-specific pop-culture references and creating an engaging story with them. It may become a little disturbing at times with the animal/human hybrid monsters that Dio creates, and with Dio himself, but those of you who do not mind such things may find reading this arc to be an entertaining way to spend an evening. Although it concludes relatively well, with only one important plot point being left ambiguous at the end, it will be interesting to see what Araki does next when the Battle Tendency arc begins its first ever publication in English before the end of this year.