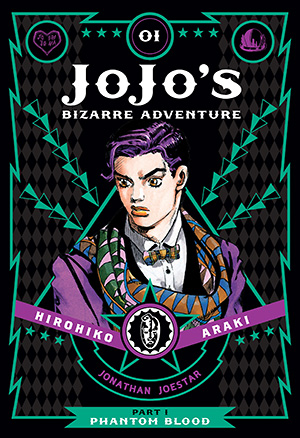 JoJo’s Bizarre Adventure has been around since the 1980s. Over 100 tankoubon volumes have been released within the series, covering several story arcs. Unlike long-running series such as Pocket Monsters, One Piece and Naruto, this series has not taken off in the West like it has in Japan. The third part, Stardust Crusaders, only received an English release 10 years ago, 16 years after its initial release in Japan. It is only in this year that the first volume of the first story arc, Phantom Blood, has become available in print in English. Has this manga from the 1980s stood the test of time?

A tribe of Aztecs possessed a cracked mask with supernatural properties. Should a drop of blood seep through its cracks, it would immediately send out curved spikes. From this description, it is easy to imagine how this mask may be used as a torture device, but there is more to it than that. Should a person be wearing the mask when it is activated, it will obviously kill them. However, death is not the end for the wearer. The dead person will become a vampire-zombie hybrid, gaining superhuman strength and the ability to drain the blood of a victim by touching them. The vampire-zombie’s brain has already ceased to function properly by this point, so they cannot comprehend the significant impact that their new-found strength is having on their own body. As is stereotypical of vampires, sunlight is lethal to them. Although the mask was lost for centuries, it was eventually discovered buried in Mexico and is now in the hands of the Joestar family.

The story now takes place in Britain. Dario Brando is a degenerate who steals from others, not to make ends meet or buy the medicine he needs later on, but because he is greedy and wants to get more alcohol for himself. He comes across a gentleman who ended up in pretty bad shape after his carriage crashed, and instead of helping him or tending to the baby that has lost its mother, Dario steals the man’s wallet and rings. This man, Lord Joestar, promises to repay his ‘kindness’ in ‘saving’ him. The story now skips ahead to 1880. Dario, on his deathbed, tells his son Dio to become a part of the Joestar family and obtain their fortune. Evidently having heard nothing of Dario’s character since their encounter, Lord Joestar welcomes Dio into the family without any suspicion of his character. Jonathan Joestar, nicknamed JoJo, almost immediately forms a negative opinion of Dio, and we soon find out that Dio will stop at nothing to ensure that he gets the Joestar fortune all for himself.

Inheritance is an important theme in Victorian Britain. One may wonder why Dio believes he must discredit Jonathan in order to gain an inheritance since he has been accepted into the family, instead of being able to simply receive an equal share of it. There are two parts to the answer of that question: he is an extremely selfish person, and inheritance is not necessarily given to those born outside of the upper-class. Unfortunately for Jonathan, Dio outwardly appears to represent the ideal of Victorian gentility. He discredits Jonathan right in front of his own father, but this is not enough for him; Dio is extremely violent towards Jonathan, and later has the intention of killing him in order to gain an inheritance.

Dio uses his power, socially and physically, to steal Jonathan’s friends away from him. Jonathan’s only companion now is his dog Danny, so he is pleasantly surprised when Erina, a girl he tried to save from a group of thugs, suddenly appears and leaves a basket of grapes for him. The two meet the next day, and immediately hit it off. They quickly become close friends, but when he carves a love heart on a tree and carves their names inside it, she becomes uncomfortable and walks off. This is when we learn that Dio will not only psychologically torture and physically beat Jonathan to try and destroy him. He forces a kiss from Erina, and to add insult to injury, proceeds to smack her to the ground with the full force of his strength. This molestation has the psychological effect Dio intended it to have on her. Exploration of how a victim of molestation feels is extremely rare in a Japanese story, but it was not explored here anywhere near as carefully as it could have been. She is seen just one more time, but how Dio’s molestation of her continues to affect her is unknown, demonstrating the narrative importance Hirohiko Araki places on male characters but not female characters.

The character designs are very different to the style seen in modern manga. Jonathan and Dio’s designs are distinct and unique, and their outfits are quite detailed. In typical shounen fashion, they both end up with ridiculously muscular bodies after the next time-skip. There is a lot of blood and gore in this volume, and the violence against the dog, Danny, is likely going to be confronting for some readers. Likewise, the molestation of Erina is particularly confronting.

The detailed illustrations of houses, carriages and the horses pulling them go a long way in making the setting look realistic. As for the text, Viz’s translation of the sound effects is generally unobtrusive, but there are at least two errors in the text: a word is missing from a sentence on page 89 and a comma is missing from a sentence on page 197. It is easy to figure out what should be there, but issues of this type are always unfortunate. Fortunately, the rest of the translation is free of any obvious errors.

At the end of this volume, there are two pages of bonus content. The first of these two pages features a black-and-white version of the illustration of Jonathan from the front cover and a few details about him, and the second page features an interview with the author, Hirohiko Araki. Araki discusses the invention of characters and also answers a question about the art on the back cover of the book, which will confuse readers after reading the prologue. The first few pages of the prologue are presented in full colour, and the rest of the prologue features orange-tinted artwork.

The theme of inheritance, the depiction of London as a breeding ground for gangs and criminal activity and the representation of the difference between social classes in Victorian Britain create an unusually high level of realism for a shounen manga series. The horror elements may turn away some potential readers, but this volume provides an excellent starting point for what could be one of Japan’s best fictional works of the 1980s. The fact that Madman’s release is an import of Viz’s almost perfect hardcover release makes this worth picking up even more.