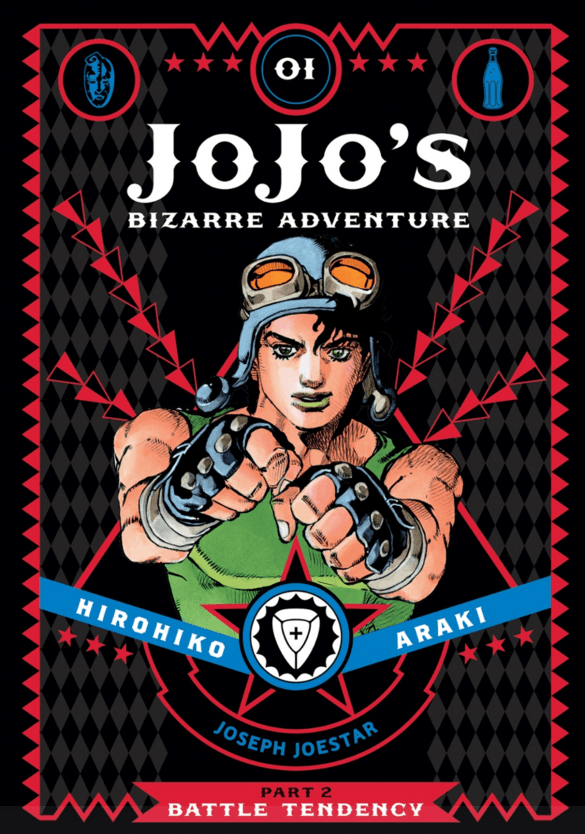 Following the events of the Phantom Blood arc, Speedwagon is now an oil tycoon in North America and Straizo has succeeded Tonpetty as the master of Hamon. Excavators from the Speedwagon Foundation have uncovered something disturbing in Mexico. Speedwagon and Straizo meet up and travel to the location of the discovery in order to find out exactly what it is that must remain unknown to the public. Meanwhile, Joseph Joestar, the grandson of Jonathan Joestar, is in New York with his grandmother Erina.

The plot of Battle Tendency is a continuation of the events from 49 years earlier in the story, but it stands up well on its own. Time skips are not always handled carefully in manga or any kind of Japanese fiction. However, Hirohiko Araki has already proven himself as a skilled storyteller in the first arc, and he has once again proven that he knows what he is doing with the plot. His skill is not only evidenced by his depictions of physical locations but also of historical settings. Araki depicts a realistic New York, using elements such as car designs and direct or parodic references to real-life commercial products to make it look like a snapshot of what things might have been like in those days. His specific choice of time period was also carefully made; setting the story in 1938 gave Araki the opportunity to explore political topics and contemporary discussions involving race. JoJo’s sidekick is an African-American person named Smokey. He stole JoJo’s wallet, and the scene that follows is a reference to a particular scene in Phantom Blood in which Lord Joestar, Jonathan Joestar’s father, makes an incredibly kind gesture towards someone who does not seem to deserve it.

Joseph may look similar to his grandfather Jonathan, but the two are entirely different characters. Jonathan was a typical Victorian gentleman, while Joseph is a reckless adventurer who enjoys messing with people who he thinks deserve it. He is also rather destructive and does not seem to have any qualms about causing major damage to the property of others, but this serves to distinguish him from his grandfather more than anything else. He also has a curious ability that allows him to predict what his opponent’s next move will be and what they will say next. Smokey goes through a small amount of character development, but like Erina, he is not an important part of the action or the story. Speedwagon is about the same as ever, but he does take a significantly more proactive role in this story arc than he did in Phantom Blood.

Those who are familiar with twentieth century history will observe that 1938, the year in which this plot arc is set, is just one year prior to the beginning of World War II. The precursor to this major global event is cleverly tied into the plot that follows on from Phantom Blood. It is now publicly known that the Nazis conducted horrific experiments on humans, and Araki utilises this fact in order to place his story in a believable real world context. The Speedwagon Foundation discovered a being known as a ‘Pillar Man’ in Mexico, and a nearby Nazi outpost is intent on conducting experiments on the Pillar Man in a secret underground facility. The Nazi scientists do not understand what they are up against, but they actually do acknowledge that fact after a while, although it is clear by this point that Araki prefers to deviate from the historical truth in some cases.

Fans who have been following the series since the beginning will be familiar with Araki’s tendency to draw muscular protagonists and grotesque antagonists. Given the title of this story arc, it comes as no surprise that this volume manages to feature even more brutal violence than before. The Pillar Men are able to absorb the cells of other organisms, which in other words means that this volume features disturbing cannibalism reminiscent of scenes from Ryohgo Narita’s Baccano!. That is as bad as it gets, but as with the previous arc, Battle Tendency is not aimed at those with an aversion to blood and gore.

In previous volumes, every panel and every page has been filled almost solely with highly detailed and intense artwork. In this volume, Araki began to include specific details about the characters’ strength. Additionally, he also included a character profile for the new JoJo on the opening page of chapter 10, “The Pillar Man, Santviento Part 1”. This profile includes his date of birth, height, weight and personal information about his life and his interests. The panels can become overcrowded with action at times, so much so that it can be hard to work out exactly what is going on, so these minor interruptions provide a helpful respite from the intense action.

As with Viz Media’s previous releases of the JoJo’s Bizarre Adventure manga, two pages of bonus content are featured at the end of this volume. The first of those pages features the biological information about Joseph Joestar, while the second features another discussion with Hirohiko Araki. On this page, Araki gives a detailed description of the process of creating the new JoJo character and reflects on the creation of Joseph from the perspective of having written several story arcs within the series in the decades since.

Presenting a story that is both familiar and new, the first volume of Battle Tendency is a well-written and well-researched plot that is engaging right from the very first page. Comedy has never been the main attraction of this series, but there is even a bit of goofy humour present in the earlier chapters of this volume. Characters both familiar and unfamiliar appear throughout its 18 chapters, making the story so far a great addition to the JoJo’s Bizarre Adventure series and a great reward for any fans who were left with unanswered questions following the conclusion of Phantom Blood. Unfortunately, some of the plot points are predictable based on the knowledge gained from the three volumes of the first arc. Nonetheless, even if the fights are prolonged for a long time, it is hard to put this book down. The wait for the release of the next volume is sure to be worth it.