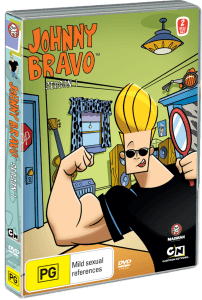 Sometimes when I revisit shows from my childhood, I sit there and think to myself, “What were you thinking?” Some cartoons had terrible voice-acting, even more had unengaging storylines, but the truth is that most were just made in terrible taste.

Johnny Bravo Season One is a bit like cheese – it smells disgusting, but it tastes better with age. When I first picked up the DVD, I literally stopped for a moment and thought, “Do I want to watch this? Wasn’t he a chauvinistic pig? Won’t I just realise how much he objectified women? [insert more rants about gender stereotypes here]”. As I watched it though, I realised that while the show is below-par in relation to other Cartoon Network shows of the same era, it tastes far better on my filmic taste buds than it did ten years ago.

Johnny Bravo is a blonde, egotistical, dim-witted man who lives in Aron City with his mother, Bunny Bravo. His life revolves around combing his hair, hitting on women, flexing, hitting on more women, flexing some more, and striking various poses to show off his muscles. Each episode of Johnny Bravo Season One involves Johnny and a woman; be it through helping the ‘damsel in distress’ (which is used lightly, because the women in this series are often very strong and Johnny only thinks they’re in distress), doing things to impress women, or trying to find beautiful women, Bravo is always doing his part to impress the other gender. 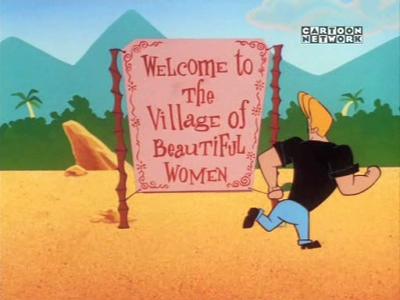 The village most guys can only dream of.

The storyline often features impossible plots (such as Johnny attempting to seduce Amazonian women, or a werewolf woman who will offer Johnny a great time only if he can deal with her in her wolf state), but overall the series holds far more realism than other Cartoon Network shows of the era – think Cow and Chicken, who spawned from human parents. Many of the plot lines could actually happen in real life; however, the stories are far more entertaining to adults than they would be to children. As a child, you search for imaginative storylines that transport you to another world. In Johnny Bravo, it’s pretty much the same world we currently live in, but with a few minor tweaks.  In fact, when I watched Johnny Bravo Season One, it just seemed like an average night out clubbing where an egomaniacal man hit on me. The fact that adults can watch it and relate more than kids is a worry, but like I said before, it’s in much better taste when I can actually understand what it means when an Amazonian woman tries to use Johnny as a virgin sacrifice and he yells out “But I’m not a – “ before being dropped in the volcano.

Aside from general storyline, the constant women-chasing episodes can become quite repetitive. Thankfully, Johnny sometimes has things to do besides hit on women: he drinks too much of a muscle-building product and becomes fat, he explores different jobs to pay for his mum’s Mother’s Day present, and babysits a boy with godlike superpowers. One thing that is refreshing to see is that Johnny Bravo Season One doesn’t have the backup segment like Dexter’s Lab or Cow and Chicken did – it’s far more enjoyable to have three episodes of Bravo goodness.

The main character in the series, Johnny Bravo, sounds exactly like his name: a guy who thinks that he is god’s gift to the world. He’s loosely based on Elvis with his slick blonde hair, his sunglasses, and his voice; however, while Elvis romanced women, I don’t think he romanced them quite as much as Johnny. Johnny’s escapades are crazy, and his own belief in himself and others’ perceptions of him are quite deluded – but that’s just a massive part of why the series is enjoyable. We all love to watch guys (who think they are a ladies man) get shot down, and it’s even better when they do it with the terrible pick-up lines and attempts that Johnny does. I suppose there is also a positivity to be found in Johnny’s spirit (in spite of his oversized ego); no matter how many times he gets shot down, he never loses faith in women or says anything bad about them. If you watch straight episodes of Johnny Bravo though, he can get very irritating and repetitive. 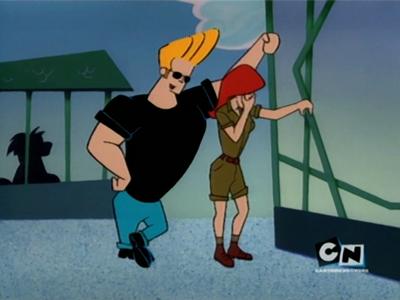 Under all that muscle is a guy who has…well, more muscle.

In fact, all of the characters seem to lack depth and all got on my nerves at points. All seem to be so heavily based on stereotypes that they just become a walking cliché. Suzy, the girl next door, can be sweet, but really she is like every other child – cute until she wants something, and then she just becomes whiny and a bother. Carl is a nerdy oddball who everyone would run away from if he was on public transport, and Bunny Bravo is a typical mother when the series begins, but becomes more eccentric as the season progresses. Come to think of it, most Cartoon Network characters aren’t developed as the episodes are designed to be standalone, but in Johnny Bravo Season One’ s case it’ very noticeable.

Visually, the animation is exactly the same as it is in other Cartoon Network classics: minimalistic, yet appealing. Johnny’s appearance is probably the most commendable aspect: the parody of Elvis’ image shows at least some intelligence on the part of the creators. Children may or may not understand it, but it’s a clever play on a traditionally recognisable figure which makes for an interesting image on screen. Johnny’s constant flexing is also entertaining as hell – if someone made a drinking game for every time Johnny Bravo flexed, everyone would be passed out before the end of the first episode. I would have to say everything else is generic, but it makes perfect sense: if the animation formula ain’t broke, don’t try and fix it. 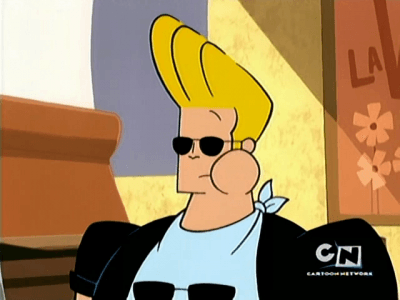 Going back to Johnny’s flexing for a second: I’d have to say the noises that accompany it are truly what makes his flexing as funny as it is. In Johnny Bravo, it’s the sound which makes the series good rather than average. The voice acting for Johnny is a classic example of the sound injecting the visual with life: Jeff Bennett’s voice was so good that I half-expect him to look just like his character in real life. The sound effects also contribute wonderfully and drive the narrative further, with the noises for Johnny’s running (or for Johnny getting rejected by a woman) adding to the overall effect of the story.

Unfortunately, this DVD does not come with any extras; however, I am aware Madman often releases special features with later seasons (they did this for Courage the Cowardly Dog). I’m not sure if it really would have made a difference if Johnny Bravo Season One had been released with extras – I probably wouldn’t have watched them anyway as I’m already too “Johnny-ed” out as it is.

Overall, Johnny Bravo Season One is a show that grows better as you grow older – as long as you can overlook the egotistical side of Bravo that many could deem immature. Like cheese, age has worked in its favour; however, like that old chunk of blue cheese you spread on crackers, the show is only good in moderation (I would even go as far to say small doses). It can get repetitive and the characters may be flat, but in the end it’s a good, solid dose of the old school Cartoon Network shows we all know and love.

I give Johnny Bravo Season One