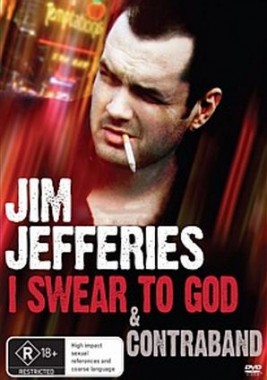 Any good Australian fan of comedy should know the name Jim Jefferies, if you’ve never heard of him before than I hope this review of his latest stand up comedy home video release will open up your eyes to the incredibly crude but ultimately hilarious humour of this Sydney-born comic. Jim Jefferies (born as Geoff James Nugent) has been a popular stand-up comedian for many years at this point in time, with his countless specials, stand up gigs around the world and his new TV series “Legit” wherein which he plays himself as he recreates on-screen a great deal of the stories he tells in his routines, this man has never been more popular.

He’s a rising star in the comedy world that just continues to rise and thanks to the lovely people over at “Beyond Entertainment” I’ve been given the pleasure of reviewing his latest DVD release which features two of his comedy specials “I Swear To God” and “Contraband”. Follow me as I try my hand at an unbiased review of  “Jim Jefferies: I Swear To God & Contraband”. 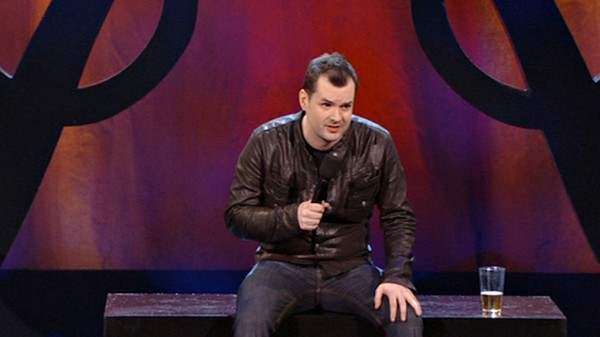 Jefferies is a man with no filter between his brain and his mouth and, for the most part, the things that come out of it are down right hilarious but his talks about religion and women can sometimes be taken negatively especially when they fall flat to such large audiences. I, for one, feel as though my sense of humour is quite broad so Jefferies’ misogynistic comments and hardcore atheist beliefs  dont exactly get to me in way that I can imagine it gets to others.

I find this man hilarious but for the sake of an honest review I’m forced to look at him from many different angles. I do not mean to generalise in any way but I can’t exactly imagine female audiences to be fans of Jim, some of the comments he makes and some of his odd theories are quite offensive but going in with an open mind and an huge sense of humour will allow you to enjoy him to the fullest. Jefferies is full of “machismo”, he’s quite the man’s man and its his talks of alcoholism, drug use and sexual exploits that prove that but I feel as though he’s also the type of comic that is misinterpreted. 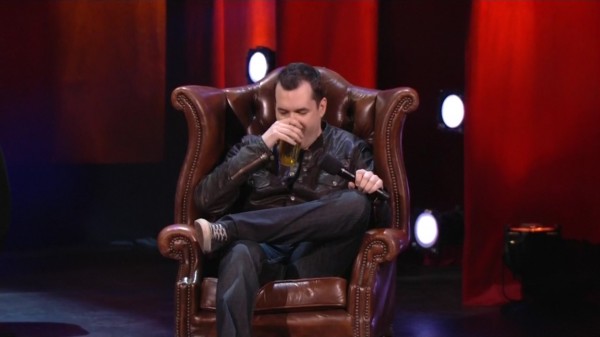 In both “I Swear To God” and “Contraband” Jim talks about his life, he tells real stories and obviously adds a comedic twist onto all of them, listening closely and opening yourself up to stories of his life really makes you think that this man isn’t as bad as he makes himself out to be. This is the power of an on-stage persona. His “tale” revolving around a physically disabled friend from childhood, even though overrun with crude humour and an even cruder ending, is filled with positive emotions and, somewhat, lessons that reveal a small part of his true persona BUT he’s a type of man that easily offends and has no problem doing so.

Each of his jokes, good or bad, are said with the utmost confidence in himself and his act, that’s something you can respect from a comedian and it is definitely something that helps even some of his more “blue” routines land without failure. He has quite a dark way of looking at the world and its inhabitants, its evident that his life wasn’t exactly the best and it shows within his routines. Any fan of comedy will know that most comics (not all of them) project what is deep within their heart when they’re on stage and sometimes this is done almost subconsciously, the thing about Jim Jefferies is that he has no qualms with opening up and embarrassing himself for the sake of winning the room, something many comedians do but fewer do with such success. 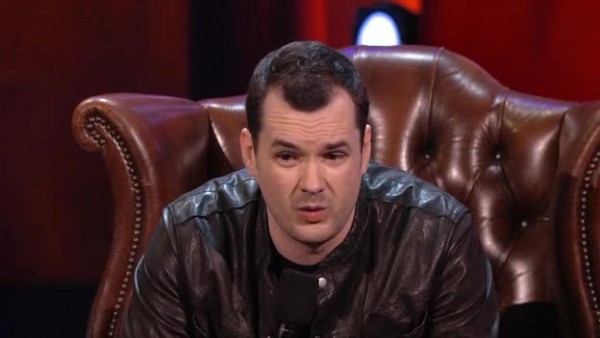 Despite the DVD being titled “Jim Jefferies: I Swear To God & Contraband”  the main focus of the release IS “I Swear To God” with “Contraband” being grouped in among the extras alongside a great deal of short clips bunched under the title of “Jim Jefferies On…”. These extras basically have Jefferies pick a subject and riff small routines based off of what he thinks, things like “Religion”, “Politics”, “Parties”, etc. Once again, even these short clips can be somewhat insulting to those of you out there who don’t have as broad a sense of humour as others. Jefferies is a definitely not a comic for everybody, though he seems like a Neanderthal in the way he speaks and what he speaks about, he really is a fairly intelligent man and it does show. You just have to listen a little harder. Jim Jefferies, as I’ve said throughout this review, can be a hard comic to handle at times but for the most part I found him to be extremely funny and so does his audience. 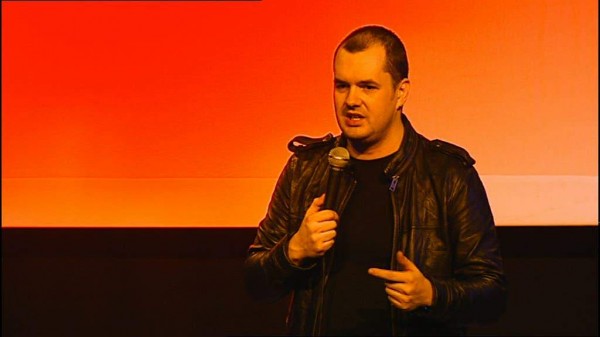 During “Contraband” near the end of his set the audience actually started yelling his very own routine at him, finishing his “bits” and sentences, all the while proving their love for this man and his comedy. He does break into laughter at one point, he also looses his place several times due to the shock of an audience being able to recite his stand up routine verbatim. It’s actually quite incredible to witness even as someone that is just watching a recording of the show. Within “Contraband” he looks back at some of his older gigs, most notably the one where he was physically attack on stage by an angry audience member.

He shows footage and takes the audience through what exactly was happening both in his head and in the audience, all the while bringing audience members closer to him so as to finish off in a great way. Jefferies has mastered th art of reeling in audiences despite his seemingly hostile words, no audience member can back away from one of his routines for long, they’re almost instantly reeled back in with a silly face or a quick quip poking fun at someone or something, with most of the time it being himself. 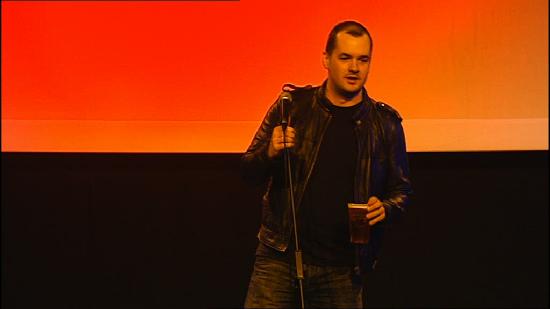 I thought this release was absolutely brilliant. Fans of this man will enjoy this DVD through and through but the fact that there’s two stand up routines packed into one disc is something even greater, you’re basically two for one so as far as releases go this one is a real winner! I thoroughly enjoy his stand up but, as mentioned, I can absolutely see why people would not. He’s rude, he’s crude and I can imagine he offends a great deal of people that’s why I simply cannot give this release a perfect score.

Comedy is extremely hard to review seeing as it is one of the most pure forms of subjective media, moreso than TV shows, Anime series’, movies or comic books. People who will enjoy “Jim Jefferies: I Swear To God & Contraband” know who they are, I can imagine they haven’t even read up to this point because they made their decision somewhere up in the first or second paragraph but to everyone else, all I can say is to go into this one with an open mind. If you’re sensitive or easily offended maybe Jim Jefferies isn’t for you but if your skin is thick and you have a huge sense of humour; “Jim Jefferies: I Swear To God & Contraband” is the DVD for you.