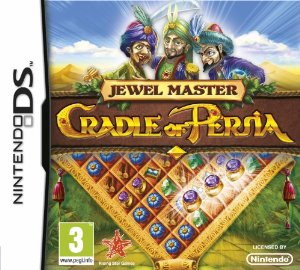 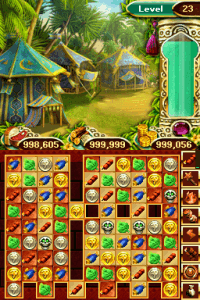 Overview:
Rising Star Games are back with another game in their ‘Cradle of…’ puzzle franchise. This time we’re in ancient Persia, with Persian themed buildings and resources as you match-3 to develop a Persian colony on your Nintendo DS. As well as being part (and mostly) match-3, part of the game is like a management sim where your success on the puzzle grid earns various quantities of food, building materials and gold with which to further your civilisation.

Gameplay:
You slide small square icons together on a grid to match them up in sets of three and remove them from the grid. The aim is to destroy the shaded squares to complete the puzzle, at the same time earning resources for your building expansions that correspond to what was in the squares. For example, shifting lots of sets of three (or more) of gold and silver coins on the puzzle will gives you points in this category, and the same applies to the wooden logs you’ll see, which contribute to building materials, or foodstuffs, which contribute to your settlement’s nourishment. 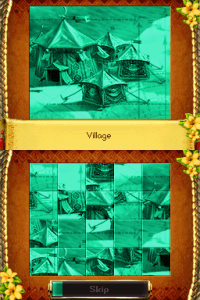 Once you have accumulated enough points in the necessary areas and meet the build criteria, you can add these new features to your settlement and watch it grow. That is, provided you have completed the level to unlock the next patch of land for building, because a set number of levels unlocks the next building allotment. There’s no doubt that this civilisation builder extension gives more depth to the game and livens it up beyond just a trawl through a set of puzzles, but it is very limited. Still, it’s perfect for the Nintendo DS, and acts as a stop-gap between puzzles so it isn’t just a slog to get them all done.

You guide your city through a number of eras by completing the puzzles, in the process earning enough of everything for the next upgrade. In doing so, you also increase your personal status, and an expansion also prompts a tile sliding puzzle where you complete a picture of your new building, though thankfully you are able to skip this should you wish to. 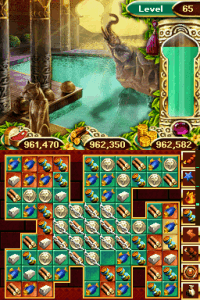 The match-3 puzzles of the main game get progressively more difficult, and a variety is achieved in what would have otherwise been a mundane task by the use of different objectives and different shaped grids. The objectives for each puzzle is always changing; sometimes you’re destroying certain types of pieces, or unlocking chained up tiles before you can progress. The grids are always different shapes and sizes, and they increase the difficulty with ease by isolating certain pieces and giving you less space, making it more difficult to execute lines of three or more, or in some cases even move at all.

A time limit ensures you never get too comfortable, but isn’t overbearing, as more time is added for each combo. Finishing combo after combo can also amount to in-game power-ups to help you clear the grid quicker, such as dynamite, which causes explosions to destroy everything in the vicinity. There are also ‘joker’ pieces to help clear the grid without combos, which is a good inclusion as sometimes it gets difficult to find a combo, so this helps to reshuffle the pieces a bit. In addition to adventure mode, there’s also Tourney mode and Blitz mode both to be unlocked, which allow you to play through old puzzles you’ve already unlocked and new ones. 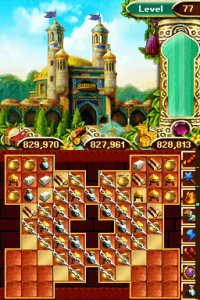 Visuals & Audio:
The presentation is adequate, because, most important of all, the game boards are clear and it is easy to distinguish the various pieces from one another. Each looks distinct and the resolution is high enough to know what each object is supposed to be. The settlement you create is basic but charming, and creates a real sense of progress that you wouldn’t get from a completion bar slowing increasing as you worked your way through the puzzles. You really feel like you are getting somewhere, and there are even little animations of buildings being built as your city grows before your eyes.

The sound, on the other hand, isn’t great, but the beauty of the Nintendo DS is that it’s so simple to turn the sound off. Simply turn down the slider if it isn’t to your taste. There’s also the in-game sound options to tamper with if there’s only one specific aspect of the sound that is bugging you.

Overall:
All in all, the combination of building sim and match-3 puzzler works well in Jewel Master: Cradle of Persia. Of course it is mainly match-3 puzzling, but the building parts play a small enough role to remain interesting, and they are a far better measure of your progress than any percentage progress meter could ever be. The graphics aren’t pushing the system to its limit, but there’s no need to. They’re colourful and clearly presented so that you can clearly see what all the icons have been designed to look like. The previous ‘Cradle of…’ games were successful and there’s no reason why Jewel Master: Cradle of Persia shouldn’t be popular too. It offers some excellent match-3 puzzling if you’re looking for that for Nintendo DS. Whether people will be interested with the casual nature of this market and the supremacy of cheap iPhone games, we will have to wait and see.