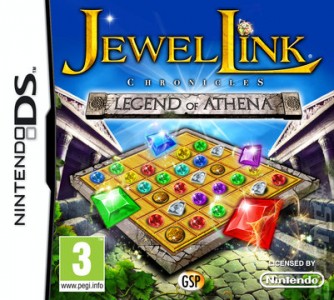 The match-3 genre experienced a real surge a few years back when ‘Bejeweled’ hit the scene in which you had to slide adjacent gems to form lines of three or more. The genre has since had countless imitations of this, as well as plenty of other games giving their own take on the match-3 area of the puzzle genre, but don’t be fooled by the name Jewel Link Chronicles: Legend of Athena which, admittedly, sounds like it’s another by-the-books copy of Bejeweled. Although it’s similar in that it’s still match-3 meaning it will always bear huge likenesses, it actually has enough differences to set it aside from others of its kind. Plus, you don’t move jewels anyway. You move fish, olives and grapes.

The reason Jewel Link Chronicles: Legend of Athena is different is that it features a curious combination of genres; it gives an incentive to your symbol-matching in the form of a RTS-like (real-time strategy) civilisation builder. As you slide the tiles together to destroy sets of three or more through the 100 levels, you earn various points which can then be used against new buildings and features for you settlement. These earnings correspond to the symbols in-game as well; matching a group of olives, fish and the like will give you bonus points of ‘nourishment’ to spend; sets of coins or rings will earn you a cash bonus, adding to your stocks of ‘gold’; or lining up groups of timber and other resources will add to your value for ‘construction materials’. 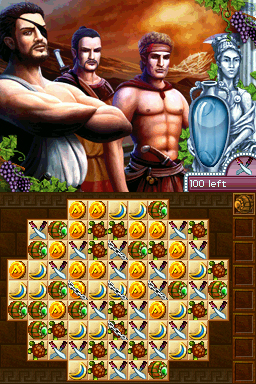 Once you’ve accumulated enough points in the necessary areas and meet the build criteria, you can add these new features to your settlement and watch it grow. That is, provided you have completed the level to unlock the next patch of land for building, because a set number of levels unlocks the next building allotment. There’s no doubt that this civilisation builder extension gives more depth to the game and livens it up beyond just a trawl through a set of 100 puzzles, but it is very limited. For the DS it’s more than sufficient, but that’s just to say that it is primitively basic, with specific developments assigned to each plot of land – you simply have to earn enough of each resource to construct each of them individually.

You will see your settlement through 5 dynasties, and you will see the changes depending on the era your ancient Greek civilisation is currently in. It’s well presented for the DS in this sense, as your city has a charm and character as you watch in grow and facilitate your people (which you never get to see) with new instalments to improve their quality of life, from fields for farming, to town halls and markets. There are minor tagged on extras with respect to the building aspect of the game, such as in one instance where you have to slide panels to piece together the blueprints of a building project, although, fortunately, you are given the option of skipping them with no consequences, which most will feel compelled to do given they seem to have been added a side-idea/afterthought. 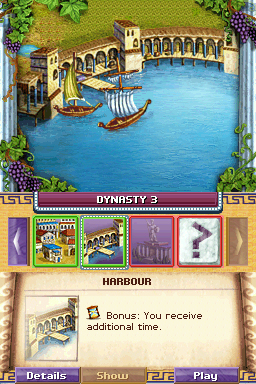 However, even with all this talk of the building options, the main part of the game is the match-3 puzzles. A variety is achieved in what would have otherwise been a mundane task by the use of different objectives and different shaped grids. Objectives range from destroying a certain number of combos, eliminating panels of a certain colour, unlocking chained up pieces, and guiding a ball to the bottom of the grid by clearing a path for it. The grids, on the other hand, are always different shapes and sizes. As you progress through the game, the levels become progressively harder with grids which isolate certain pieces and give you less space, making it more difficult to execute lines of three or more.

A time limit ensures you never get too comfortable, but isn’t overly constricting as more time is added for each combo. Finishing combo after combo can also amount to in-game power-ups to help you clear the grid quicker, such as blasts which destroy everything in the vicinity. Other grids have abilities taking up squares which help clear the grid when they are activated when involved at the start or the end of a nearby combo. On top of the main story, there’s ‘Relax mode’ which is just a quickplay mode, allowing you to go back and re-do any puzzles you’ve already completed, and subsequently unlocked, in the main mode. 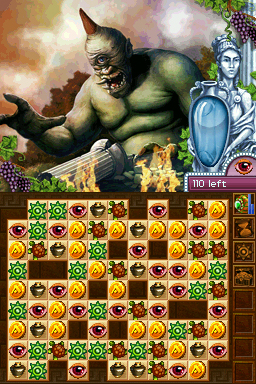 Overall, Jewel Link Chronicles: Legend of Athena offers an interesting combination through its use of a ancient Greek city builder teamed with match-3 puzzler, but for some reason it works and makes the puzzling sections more satisfying as there’s a rewarded after accumulating a set number of points. The graphics allow your settlement to take shape nicely, and gameplay is a decent enough example of match-3. With a reduced price point as well, the 100 puzzles and additional 15 bonus levels are worth a go if you enjoy simple puzzlers.