Have you played Jetpack Joyride? I have. I played it to death over a year ago on a little thing called an iPhone. Indeed Barry’s adventure with a jetpack is one of the most popular games to have hit the smart phone gaming market, and has without doubt been hugely successful. It is now available for free on both iOS and Android.

So here we have the Sony version of the game, compatible with the PSP, PS3 and the PS Vita. Classed as a ‘mini’, the game will set you back $3.99 – which in all fairness is a little steep for something over a year old you can get for nothing elsewhere. 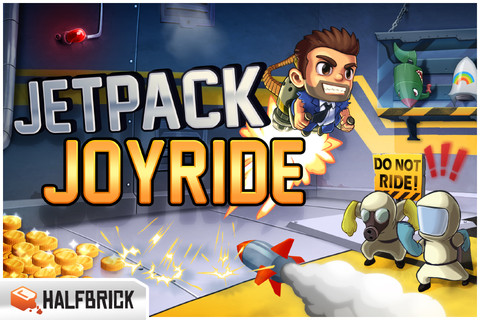 JJ is  a one button game. You control Barry, a bloke who for some reason has stolen a jetpack and is stuck in a neverending side scrolling laboratory packed full of hazardous laser beams, zappers, and an infinit supply of cruise missiles. Players control the altitude of the jetpack and must dodge obstacles and collect coins and power ups in a bid to keep going for as long as humanly possible.

What makes an already fun mechanic highly addictive is the added reward structures. Keep collecting coins and you can buy rafts of new goodies – jetpacks, power ups, new shoes, whatever – there is a host of stuff to spend your hard earned cash on. The clincher in the addictiveness stakes is the ranking system, which sets you star challenges that reward you with coins and higher levels for completion. These range from the easy – collect 100 coins – to the weird – high five a dozen scientists in one run. With three active challenges at all times there is always something achievable to direct the gameplay, to push you in to just that one more run. 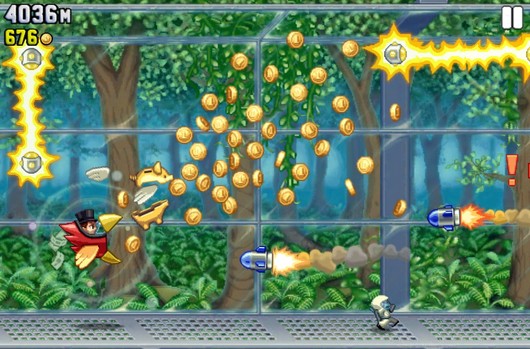 Barry can also pick up spin coins for end of run gambling that can add bonuses to the next run, provide a coin reward or even kick his presumably lifeless corpse just that little bit further after crashing out. More entertaining than that is the inclusion of vehicles, which act not only as entertaining gamechangers but allow you to take a hit without dying. There’s a teleporter, motorcycle and a giant DragonBall Z-esque dragon to be found amongst others, and their inclusion of course expands the wealth of missions available.

There’s no denying the gameplay is excellent, polished and highly addictive.

Jetpack Joyride is a near perfect combination of what makes a casual game great, something that you find yourself playing for much much longer than intended. HOWEVER, the Vita version is exactly the same as other previously released and free editions of the game. The only differences are extremely minor – you start off with the machine gun jetpack for example. This $3.99 version is essentially a PSP mini, with no trophies and no integration of Vita specific controls. Tricks have certainly been missed, and it is questionable why anyone would prefer this version of the game – making the fairly safe assumption that the majority of the gaming population has access to iOS , Android or simply Facebook.

Jetpack is a colourful and slightly kooky cartoon delight. From Barry’s dodgy haircut to small background details it’s clear that a lot of love has gone into the design. Things never become cluttered, and the interface is simple and smooth to enhance the ‘neverending’ style of gameplay. The music fits nicely into place, although it’s not something that particularly stands out. What does jump out is that much like the gameplay nothing has changed from previous iterations of the game – so don’t go into this expecting any tweaks or changes.

Jetpack Joyride is a fantastic game, and one of the classics of the revitalised and now dominant casual handheld market. Addictive as hell and perfectly formulated, the cartoon style and endless gameplay make it a quick and easy entry into favourite time waster territory. Thing is, everyone’s played it, or can play it for free. With no trophies and no price justifying differences – what on earth’s the point? With a point knocked off for missing an oppurtunity to evolve, Jetpack Joyride nonetheless still scores high.