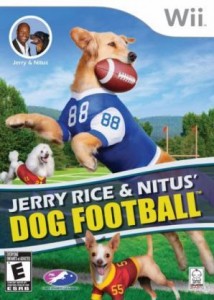 Over the past five years or so, there certainly have been some unique offerings on the Nintendo Wii. The downfall of the platform though has always been the many third party offerings that fall flat and offer up nothing but a quick cash-in for lazy publishers that are trying to make a buck. Jerry Rice & Nitus’ Dog Football honestly looked to fall into that category at first, but after just a short time with the game, the love that Judobaby put in to this quirky title started to shine through and I can easily say that this game may be one of the biggest “underdogs” on the platform this year. So what is it that separates this game from the rest of the licensed pack on the platform? Here is my review for Jerry Rice & Nitus’ Dog Football for the Nintendo Wii. 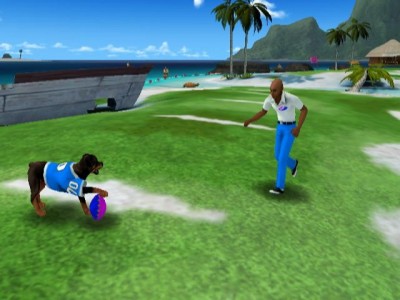 Gameplay
Forget all about Jerry Rice, this game’s true stars are the dogs within. As the title states, the name of the game here is dog football and surprisingly, everything works rather well despite the crazy concept. In the standard game, the player starts out by picking a human avatar to be their quarterback as well as picking a couple of breeds out to actually play the game itself. As a quarterback, it is your character’s job to pass or run the ball down the field and try to rack up as many yards as possible in the process. Since this is dog football rather than the actual sport, the main objective is to hand off the ball to your pooch players and control their moves with a tasty treat as bribery.

As soon as your four-legged team take the field, the player must pick one of a set number of plays to conduct and pass the ball off to a pup. If you think this sounds somewhat like Madden, you would be right as the game is still football as the rules are nearly identical. The gameplay however is quite the opposite though as these pups require a little convincing to play the sport. When one of your dogs have the ball, you must then use the Wiimote to drag a treat along the field, which is used to lure the targeted pup closer to the touchdown line. Even though you don’t actually control a dog, this treat method still allows for you to gain their full attention and command them to jump and dodge obstacles with a flick of the remote. 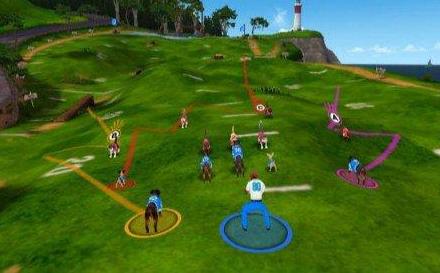 Due to the target audience, this concept might be a bit much for younger players to grasp. Thankfully though, Judobaby thought ahead and included an auto-pilot mode that lets the player hold down the A button and let their breed automatically run in one pre-set direction without the need to constantly float the treat around. If an obstacle comes in the way, the player can simply let go of the button and resume using the waggle controls to better guide the dog out of harm’s way. Defense works about the same, but with the main goal being to tackle the opposing teams’ pup in order to prevent any scoring on the other side. At first, I felt this whole control scheme was a bit awkward as I had a hard time adjusting to not controlling the “player” on the field, but after a short time, I discovered it really is as simple as moving a reticule on the screen.

Jerry Rice & Nitus’ Dog Football also features quite a few themed locations for the game to be played at, with each boasting their own obstacles and shortcuts that can be utilized to let the player gain an upper advantage. Tunnels, path-blocking obstacles, and even other animals can instantly change the pace up on a play, so the player must constantly be on the look-out for terrain that could very well play out in their favor if used correctly. This clever level design keeps each field feeling distinct and offers up new strategies to be applied while trying to score that coveted touchdown or to simply take down an opposing mutt by surprise. 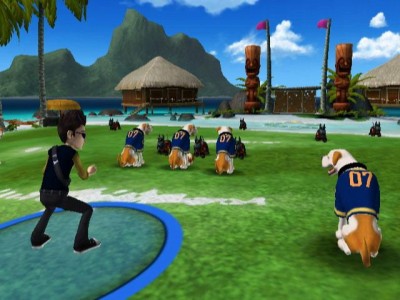 Those who want competition can take on the season mode which has the player take out one team after the next while they battle for the “Golden Hydrant” trophy. As matches are won and the player progresses, a ton of unlockables can be found that add in new personalities to act as quarterbacks and new breeds to be your powerful players. Oddly enough, Jerry Rice (and Nitus) are not even available until they are unlocked, which is certainly an odd move considering all the endorsement that was seen on the front cover of the game. I know it may sound a bit odd, but the vast amount of unlockables such as costumes and avatars kept me going back to Jerry Rice & Nitus’ Dog Football, as we don’t really see many titles offer up hidden content anymore. Obviously, this adds in a ton of replay value as there always seemed to be something new to be found by simply progressing throughout the game.

Graphics/Audio
The visuals in Jerry Rice & Nitus’ Dog Football are decent, but there are still a few flaws that can make this reek of a budget game. Loading screens are usually choppy and the animations within hesitate and struggle to keep up at times. Now these are just loading screens so this won’t effect the actual gameplay, but at times I thought my system was having trouble reading the disc due to these recurring frame-rate drops. Now on a more positive note, each dog looks great and runs fluently on the field so never will the player have trouble controlling as like I said, the game really is as simple as pointing the remote at the screen and directing your dog. Little touches also go a long way, as Judobaby are definitely a proud mother when it comes to this title and it shows by how much effort that went in to each field’s design. Stages are usually full of color and sacrifice true realism to create a bubbly and upbeat atmosphere for these puppies to play in. Cheery animations such as a pooch dancing when scoring a touchdown and celebrating when making a tackle also make the game more fun to actually play and offer that much more incentive to win each session. 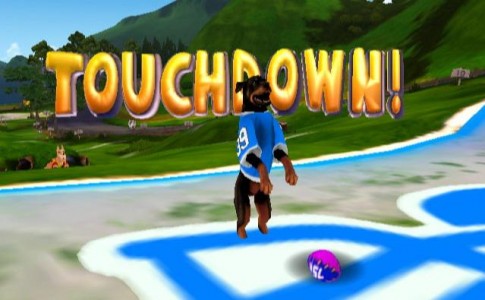 As far as the music goes, there is nothing really award winning here as most of the music sounds rather generic. It’s not really bad by any means, just not innovative for the genre as sometimes I literally felt like the music could have coming from a Sims title based on the track provided. Each avatar’s voice acting (including Jerry Rice himself) usually does a good job at adding some individuality into your persona, but some of these voice bits are looped far too often and made me grow quite tired of my “rock star” avatar telling me how he likes to rock every 30 seconds of the game. The dogs themselves all sound realistic however and these “Woofs” and “Howls” are thankfully worked in well and never sound too cluttered or overbearing compared to the humans within the game.

Overall
Back when I first heard of Jerry Rice & Nitus’ Dog Football, I would have never thought that this odd concept would have worked on any platform, little alone the Wii. Interestingly enough, the simple yet original control scheme provided works wonders to make this woofy romp an enjoyable one. Stage variation and the heavy amount of interactivity also offer up fresh elements of gameplay for each area and these dogs are filled with lively animations that make them hard not to love. I still feel that more work could have been applied in the audio department of the game, but Dog Football certainly shows us that Judobaby are a new developer that look to be out to make quite a name for themselves. If you enjoy the pigskin and have a love of canines, you really can’t go wrong by giving this unique, tail-wagging experience a try.