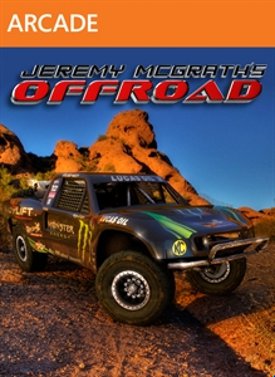 Overview:
Jeremy McGrath is one of the big names in Motorcross racing, but after retiring, twice, from the two wheeled racing scene his later years saw him doing a bit of the offroad racing ones.  Jeremy McGrath’s Offroad combines the developer of Baja: Edge of Control and Jeremy McGrath’s popularity among the dirt racing fans.  Offroad being a pretty niche market does the game offer what the fans like most about the sport and gameplay?

Story:
While there isn’t a drastic amount of story, there is a career mode that goes from buggies, to cars, to racing trucks across 23 events including lap races and sprint at the start of every new vehicle type.  While the title does say Jeremy McGrath, the player character is really just a no one starting out their career and rising through the ranks of the different offroad racing events.  McGrath is still around, just at the front of the race waiting for you to prove your worth and over take him. 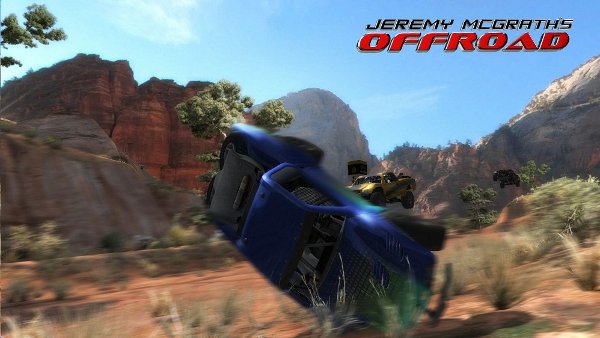 Being Jeremy McGrath’s Offroad, it feels a little weird that he is not the player character, but the main competition.  It does make some sense, though for other reasons it gets even weirder.  The career mode does have a solid length though with the number of events and the fair amount of different kinds of vehicles to drive.  Though how long it takes to win all the races really depends on which difficulty you choose as it does have big difference between them.  But really, that’s more the gameplay side, speaking of which.

Gameplay:
Racing games have fairly straight forward gameplay, go fast, pass everyone else, win, but there is plenty of different things that can be done differently between the varying types of racing and the feel the game wants to give the player.  Offroad racing presents players with a few more details than the standard racing, which the game makes sure to feature with the clutch boost.  While, I didn’t figure out exactly how it worked as there wasn’t much of a tutorial, the few times I did get it to go really made a difference.  Mastering the clutch boost is probably the key to not only getting off the line, but taking turns as well, so it is the thing to learn when going head-to-head against other players. 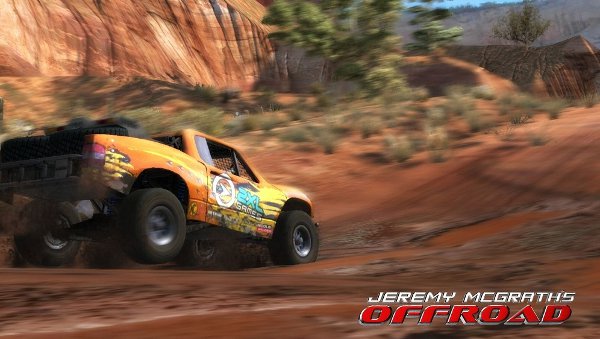 During races there are also hazards to avoid, falling rocks, snow balls, bails of hay, that will plague the track throughout career mode.  These have an option to be turned off though for Arcade mode, so anyone not wanting to deal with them can enjoy their absence.  It’s perplexing to see them put in though as I’m quite sure those things don’t happen very often in real races, probably as a means of keeping the race more lively and allowing the order to at least switch up a little bit.

Difficulty has a nice three selection range from Amateur, allowing players to zip right through the opponents to McGrath as he leads the race 95% of the time it isn’t you, to Semi-Pro, giving more of a challenge through competition, to Pro, where upgrades and mastering the controls are the only way to be able to compete.  The only issue is that the upgrades work on a really wonky system, that is really unexpected in this kind of racing game, or really racing games in general.  Where others would have individual parts for players to purchase as they accrued money, Jeremy McGrath’s Offroad utilizes a leveling system. 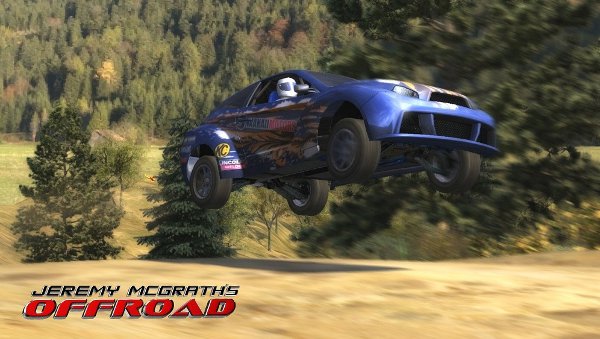 Gaining experience for the leveling system has a somewhat uneven system.  On one hand experience is gained from passing opponents, having cleans laps, power sliding, and finishing first, but on the other experience can also be gained from smashing fences, signs, and driving off-offroad.  When you can get more experience not having a clean lap and crashing into different props than actually avoiding collisions, something seems a little wrong and kind of sends the wrong message.  Then after having gotten levels and upgrade points, they can only be applied to one car in each of the different classes, so make sure to pick the sponsor you want all the way through, or you’ll have to start back over from scratch.  So a pretty weird system, not broken, but an interesting choice.

Audio and Visuals:
The music of the game is pretty forgettable, it does it’s thing and fits the game well enough, but doesn’t do much to really catch your ear or really get you in the mood to race.  Besides music though the vast majority of the game’s audio outside of engine noises is Jeremy McGrath himself, and man does he have a lot to say.  Dropping tips in the menu pretty consistently, but that’s not all, as in the races he will be sure to tell you exactly what obstacles are coming up 20 feet in front of you.  Luckily, these can be turned off, if you desire, but maybe you like constantly hearing the sound of McGrath’s voice either for reassurance or the comedy of some of the tips or whatever. 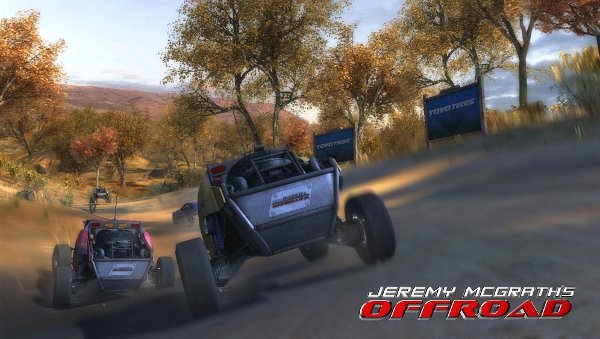 Visually the game does look very well put together though.  The trucks and other vehicles look faithfully reproduced both in terms of design and paint jobs for the sponsors.  McGrath’s own truck looks pretty spot on to pictures of the Monster Energy truck he has driven in real life.  Besides being faithfully reproduced though, the graphics are more par for how they look, but as an XBLA/PSN game that’s really to be expected.

Overall:
Jeremy McGrath’s Offroad is a good racing game.  It features really well constructed racing that fans can really just get into, but it does have a few interesting choices that don’t really hurt the game, but I guess stand out as being unique for the genre.  All in all, the audio is probably the weakest of the games points, so it doesn’t miss the mark all too much.  I give Jeremy McGrath’s Offroad